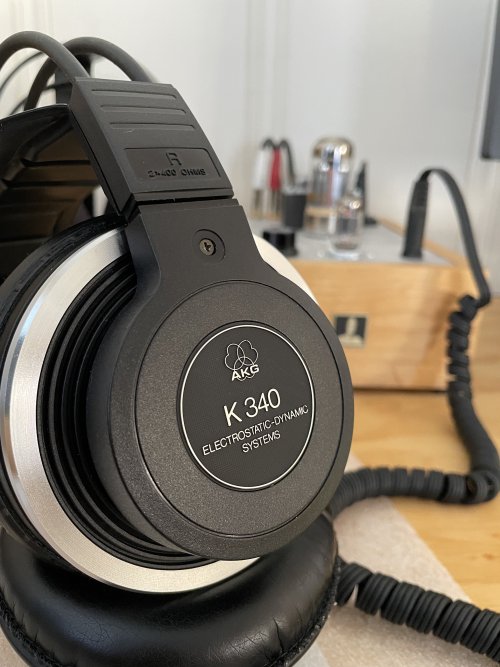 You are using an out of date browser. It may not display this or other websites correctly.
You should upgrade or use an alternative browser.
AKG K340
C

You say you don't have a headphone amp... how are you then running the K340? That headphone is far more demanding than most things out there. The RA1 is a CMOY in a wooden box and will choke on a K340. You really do need a powerful standalone amp, though I'm hardly an expert on dynamic headphone amps to recommend one. Also synergy will depend on what kind of version you have; a bass-light version will do well with OTL tube amps while a bass-heavy version will probably do better on a solid-state amp.

I actually prefer the stock sound over the modded sound at least as far as bass-light K340s go; all the modded pairs I've had or heard sounded muffled in the highs and relatively dull, though they also did tame the echoey resonance that really plagues bass-light pairs. I had some Headphile'd pairs which I didn't like sonically at all, they sounded very dark and muffled no matter how they were driven. Bass-heavy pairs I don't like very much either, they have the tonal balance of an underdriven HD650 though they are far faster.

The bigger issue here is the chassis design, which I think is pretty terrible. There isn't enough clamping force by miles, and this is a headphone that pretty much relies on a good seal with the ear for its bass presence and extension. So, replacing elastics and earpads is essential, but to improve it beyond that I would try and swap out the whole headband mechanism to something that would provide much more clamping force - HD280 Pro levels or so. The metal arcs actually do carry the signal from one earcup to the other so the headphones will have to be reterminated to dual-entry before you can swap the headband out.

Your going to laugh at me for this. But I'm running my K340 with my Rotel RC03 preamp. I know these headphones will do better with a Headphoneamp, but the Rotel does a very good decent job with the K340

Does the Left channel sound weaker than the Right channel if K340 is underpowered?

It shouldn't be the case. Weaker as in 'lower volume' or 'less bass/impact'? These two can have two very different causes.
[Archive] Head-fi feedback

The Left channel is weaker in terms of volume, and it sounds more sterile, hollow and distant compare to the Right channel which actually sounds warm, full and has more bass impact to me...

I would suspect the electret has gone out (I had one such pair with similar symptoms). The only way I know of to check is to disassemble that side and test with multimeter. You could also try opening it up and press on the back of the dynamic driver (it might have simply come loose from its housing). My suspicion lies mostly with the first possibility though it never hurts to try.
[Archive] Head-fi feedback

Will try it out.

Is anybody running a receiver/amp with speaker outs for ES phones?
I'm considering the AKG K340.. I have an Arcam AVR350 receiver
Thus, perfect for stereo. I can even run 'direct' stereo (all processing, tone controls, sub, etc. cut out).
I would use a speaker switch...

Just curious of anyone taking this route and any cautions, etc.

They are possible of course. There are a few things to mind however:
1. Have to re-terminate those phones so they can accept the speaker-out connections
2. Make sure your receiver/amp has little (preferably none) background hiss as this comes out VERY clearly on headphone listening
3. Make sure your amp is happy with unconventional loads such as this 400-Ohm nominal impedance load

I'm am still in the selection mode, and considering non-ES phones too...are their any advantages to having an amp/eq. in line between a conventional receiver headphone output and the 'phones?

(Understanding this may be tempered by the specific headphones being considered.)

Decided to give another go at the AKG K340 after finding a pair in excellent condition...

My prior memory of them was fond and I had always had a lingering desire to give them another shot!

It's not an understatement to say these need a lot of power to show off their talents. They are also somewhat picky about the type of amp. After trying a few amps I settled in on the trusty Bottlehead Crack which can play load and clean. The only other Amp that did a better job of amplification was a vintage Sansui Integrated Amp. The Sansui had plenty of headroom and brought out even more details, better instrument separate and much larger soundstage. The main drawback was the tendency to sound bright with certain tracks where the Bottlehead was always smooth.

I recall my initial pair sounding on the lean side in the bass but this set has no issues getting deep especially on the Sansui. I'll have to re-examine if these are the fabled bass heavy version but im also thinking these just need the right amplification and proper seal to function properly in the bass. While the bass goes deep and is defined, it might lack a bit of the slam of a DT1770 or similar. Comparing against an HD650 the bass seems to be just as capable.

The mids and treble on these are shockingly clean and clear. They defiantly have that Stax-like ability to reveal details and textures in the music. Generally the mids come off as balanced in relating to the rest of the spectrum. By contrast the K400 definitely has an emphasis in the midrange which can sound especially wonderful with vocals and acoustic music. Other have also called out the K340 for have what sounds like disconnects between portions of the frequency response. Try as I might Im not detecting any noticeable occurrences. Maybe some are sensitive to each drivers ability to render details to different degrees? Overall everything sounds cohesive and balanced.

While its still early in the rediscovery process I'm deeply impressed so far and happy these are surpassing my initial expectations.

I had a feeling that current (not voltage) was the secret to unlocking the K340s abilities. I pulled out a Bacon HPA-01 which is a current based amplifier and has two outputs on the front. One is current based and the other is voltage based. I first plugged the K340 into the voltage socket and while it sounded fine it was no better than several of the other amps I tested. Next I plugged them into the current socket and they immediately opened up! The Sansui AU-517 integrated is a 65 wpm DC amplifier packing alot of punch. Its headphone output much also be delivering a good amount of current because it delivers very similar results to the Bakoon amp.

Anyone looking to get the most out of their K340 should look for an amplifier with sufficient currant output abilities. It makes a major difference with this particular headphone and it's true abilities...
Annual Bay Area Meet 2013!

Music - Headphone - Ears!
You must log in or register to reply here.