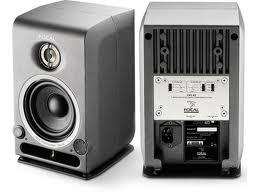 See full thread gallery...
You are using an out of date browser. It may not display this or other websites correctly.
You should upgrade or use an alternative browser.
Accurate desktop speakers

I mis-read your post i thought you were looking at the standard pro8 not the ribbon tweeter 1, I have only heard the standard Prodipe Pro 8 compared to the KRK RP8, the ribbon 1 should be even better.

Don't know if this has already been said or not, but the Creative Megaworks 2.1 250D is good.

Well I had a listen today, to only 3 speaker pairs sadly which is all they had at the store - the KRK RP5 G2, RP6 G2 and the M-Audio BX5a.

Now first of all, the one thing I have in common with all 3 of these speakers is that they sounded nowhere near as good as I would expect them for the price point. I'm almost certain that this is not due to the characteristics of the speakers, but due to the environment.

The testing room was full of gear, almost a perfect cube in all 3 dimensions, with lots of speakers placed on shelves somewhat higher than ear level which made for less than stellar imaging, if one could talk about that in such testing scenarios at all.

Because of this, it was -very- hard to get a true feel for the sound of any of these speakers because it is as if the room was eating a good portion of their sound and leaving only a hollow echo of what it actually was.

I'd bet my left arm my room has 5x better acoustics than that place, and it doesn't have an inch of treatment.

Still, from what I managed to gather is that the KRK RP5 was relatively detailed and nice sounding, if lacking a fair bit in the bass department when it came to playing something electronic or say, hip hop.

The RP6 G2 sounded like it had a nicely filled up and rounded off bottom-end, which also - or maybe this is just my perception - made the whole range sound more natural and, maybe, and I'm not sure, but maybe slightly less detailed than the RP5? But definitely more natural sounding (sorry I'm still very new at analyzing audio gear, haven't done much of it in my life).

The M-Audio BX5 was probably my least favorite of the three and while it did offer a fairly nice amount of detail in a specific way, in comparison to the RP6 and even the RP5 it felt as if you would have turned on the " 40's radio " equalizer preset, there was a very small amount of low-end and I definitely would not like this one for any kind of electronic music or anything else that relies a good deal on bass.


So from what I've managed to hear in this far from ideal environment the RP6 G2 is the most likely one to make it home and if there's one complaint I have to make is that the bass on all of these speakers sounded somewhat...strange, I mean, different, not necessarily in a bad way, but this is probably due to the fact that every single set of speakers I've had so far used a subwoofer below the desk for bass reproduction, whereas here it was actually a part of the speakers and had a "left and right" aspect to it as well as coming from the same position as the rest of the sound. I liked the way it fit in. Sometimes, with a subwoofer I'd get the impression that the sub was "playing its own melody" or rather, it sounded disconnected from the rest of the range, but this is probably due to the relatively high crossovers and bad subwoofers I've been exposed to so far.

A probably important discovery I made was upon seeing the M-Audio CX8 which is severely discounted and would actually have been an option, if I had more space. Seriously, and I mean really, this thing is gigantic. There is no way I could put two of these on both sides of the screen. The 8" Prodipes I made a cardboard cut-out for would actually fit on the desk but these are at least an inch bigger in every dimension than most other 8" woofer monitors that I've read about so far, and I definitely could not find the space for them.

So all in all, that leaves me with the RP6 G2, and the somewhat more expensive Prodipes Pro Ribbon 8 which are supposed to be better than the RP8 G2 while being cheaper than it, and actually being able to fit on the desk for an 8" woofer. However, I don't believe I can have a chance of hearing them. They do intrigue me because of the ribbon tweeter however. I understand this is a hate it or love it affair, I'd appreciate if I got the chance to listen to some Adams today, to get an idea if I would like ribbons. I'm honestly not sure. There is one place where I could possibly audition the Prodipes and that is about 37 miles away.

I'll let this settle in for a few more days.
Focusrite Scarlett Solo

Don't care to try the 30 day satisfaction  policy via shipping them to you?...just a thought.

Nope...I'm outside the US, rather buy something locally. Shipping here, and back if I don't like them, too much hassle (not to mention cost, customs and all that).
Focusrite Scarlett Solo

OK, probably Wednesday or so I'm going to have a listen to the Prodipe Pro Ribbon 8 - gonna be a far drive though.

It boils down to either a:

(yes I know the prices are ridiculous)

I think it is worth spending a bit more money and buying the 8" for that added bass for electronic music...to hell with desk space, I'll find a cheap massive desk in the ads. Better than buying smaller speakers and regretting it later.

So I believe the logic is; if you can get an 8" woofer that sounds better than a lot more expensive 8" woofer, then there is even less point getting the 6" version of that more expensive woofer... or something like that.

If I like the ribbon sound of the Prodipes...they're going home for sure.
Focusrite Scarlett Solo

wrxsti said:
Nope...I'm outside the US, rather buy something locally. Shipping here, and back if I don't like them, too much hassle (not to mention cost, customs and all that).
Click to expand...

I bet if you were to take the BX5a speakers & open them up you would find a subsonic filter in there. My BX5's had one which I removed & the sound became much more pleasant & full. While still not having a lot of bass there is now audible bass down to 40Hz whereas there wasn't before. D.C. coupling  the bass amps improved dynamics. The tweeter amps are now also capable of D.C. amplification except for the crossover which sits at there input (capacitor coupled by nessessity). This set of speakers of mine has excellent dynamics  good bass even without my sub but I still use the sub to augment output below 50Hz (crossed over at 50Hz) with very low volume setting on the sub & the speaker set sounds perfect for me.
Homebuilt computer with Core I7 stock clock. Asus Strix Raid DLX (D.C. coupled RCA & eliminated all electrolytic power supply caps replacing them with metalized film caps on the analog side), Modified JBL LSR305 (Metalized film coupling caps) with Tannoy TS10 subwoofer (D.C. coupled modified crossover, increased low frequency extension to 17Hz). Audio Technica ATH-M50X, Etymotic Research ER4P with P to S converter. Sennheiser HD579 modified.

If you want more bass with this class of speaker, why not add a sub?

mtnsloth said:
If you want more bass with this class of speaker, why not add a sub?
Click to expand...


I do have a sub but I wanted as much contribution from the sattilites as I could get as it gives the bass more dimension than runnung all the midbass & deep bass through the sub, only the very deepest bass fundementals are sent through the sub in my case. While without the sub I get usable output to 40Hz the sattilites can contribute to the bass output  down to it's port resonant frequency of 30Hz giving usable stereo bass down to 30Hz when augmented by the sub. My sub is crossed over @ 50Hz but doesn't really reach max output untill 25Hz which is about a near perfect to blend with the sattilites contribution in the 50 to 25 Hz range. The sub continues to give usable output to <20Hz with my mods to the sub.

None of the speakers in this form factor and class are ever going to be great for natural sounding bass - so I guess I don't see the point of stressing. That said, I do appreciate the lengths you are going to get as much as you can from your system (and I am taking notes!). So . . . as is the tendency with this hobby, obsess away, man - obsess away!

mtnsloth said:
None of the speakers in this form factor and class are ever going to be great for natural sounding bass - so I guess I don't see the point of stressing. That said, I do appreciate the lengths you are going to get as much as you can from your system (and I am taking notes!). So . . . as is the tendency with this hobby, obsess away, man - obsess away!


The 5" JBLs actually have great bass but fall slightly short in other areas. I'm sure mods to tha amps would fix that as the speakers themselves look to be quality units.

How about the Focal CMS series?