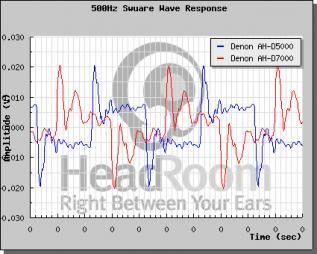 See full thread gallery...
You are using an out of date browser. It may not display this or other websites correctly.
You should upgrade or use an alternative browser.
According to all graphs D5000 > D7000...

I was reading about these headphones, and all "flabby bass" this, no its "not flabby" that aside, one or two people commented on how much more precise, at least on paper, the D5000 in general and especially when compared to the D7000.

Why do people seem to unanimously think the D7000 sounds better? It's specs are total garbage, especially when compared to how exceedingly well the D5000 does. I am talking mostly about the 500hz square sine wave tests provided by headroom. The distortion is less... Even a balanced D7000 doesn't seem to compete on paper with an SE D5000....

D5000 has a steadier frequency repsonse, and overall is on a whole other level spec wise...

Sooooooo is it old ears who have cash for the D7000 at work here? A massive placebo effect? or what?

PS lets keep cable talk out of this

You listen to the headphone not to the graph

and I don't believe much in graphs anymore after seeing something like this.

In this graph it shows the d7000 as having less bass than the t1 and the hd800 when its the opposite, they actually have much more bass than both.
It also shows the t1 as having more lower bass than the hd800 and I actually noticed the opposite as well.
"To breathe life into music is more important than to prove respect for it." - Paul Tortelier
My top 3 headphones: edition9/ d7000/ T1

those graphs are for reference value NOT the final outcome. Also your ears are going to hear a very different story.
Anyways, who that heck would listen to sine generators all day?1

And again I have to say it, graphs mean absolutely nothing when it comes to how a headphone actually sounds. Go audition both side by side, hell, DBT them, there is no question as to which is the better headphone. The D7000 is much more balanced and detailed, and generally just all around much better than it's younger brother.

Again I'll give the example, look at studio monitors, many have fantastic graphs, yet they come out sounding like crap for music listening of any kind. Graphs mean very, very little as far as how a headphone actually sounds.

I was talking more about the 500hz graph though... Phase smearing is phase smearing...
I've eaten the sun so my tongue has been burned of the taste

If the regular graph is so wrong why should we believe in the other graphs as well?
"To breathe life into music is more important than to prove respect for it." - Paul Tortelier
My top 3 headphones: edition9/ d7000/ T1

good point I guess I can't find the D7000 for a decent price anywhere though.... I am not willing to pay 999.999
I've eaten the sun so my tongue has been burned of the taste


Thennnnnn....
why bother with this debate?

The Denon D2000 sound great to me for what they are. It's a different flavor for sure.

I am bothering because I would like to save money, and also feel like I have a better headphone... stats back that up, but apparently people don't hear what the paper says. and the D7000 have been had new under 600... thats why.
I've eaten the sun so my tongue has been burned of the taste

KaraokeEquipment.com has the AH-D7000 new for $549.00. Don't know how they can sell them so cheap. Found them in a Google products search. Almost bought some a while ago, they've been posted there for that price for the past few months. hmm.
.
Grado HF-2 #555
Grado SR80i
iBasso D4 Mamba w/ Topkit

Thanks! I actually just found them too... too good to be true, but I would HAVE to sell something to get them now... man :S... *325i and K702 hide in drawer in fear!*
I've eaten the sun so my tongue has been burned of the taste

Wait so you have the D5000s? If so, how can you feel that you have the better headphones when you have not heard the D7000?

Keep in mind that the human ear does not hear things anywhere close to the way machines do, and headphone companies focus their designs around how we as humans hear the headphones, not how their machines hear them. This is why graphs will NEVER tell you how a headphone truly sounds.

Think about it, that above HeadRoom graph is blatantly incorrect in so many ways, so why wouldn't all the others, including every single one involving D5000/D7000, be wrong as well?
Headphones: LA7000 Lite w/ JMoney Pads (Coming Soon)
Amplifier: Audio-GD C2
Source: Audio-GD DAC19 DSP1

nono poor formating i guess. I would like to save money, by buying the D5000, and also feel like the D5000 is in fact the superior headphone because of the paperwork
I've eaten the sun so my tongue has been burned of the taste

You could always try calling J&R to get a deal on the D7000.

I know how you feel about the money thing though, I had to pay $650 at a $150 discount to get my D5000s from an authorized Canadian dealer, and now I'm selling them because I don't like mine unmodded, and now I have enough money around to get a better high end can (LA7000 Lite or T1 is what I'm looking at).

Probably gonna end up buying the LA7000 Lite if my T1 plan doesn't pan out.

But no matter what, I promise you if you buy the D5000s and later hear the D7000s, no matter how happy you were with your D5000s to that point you will regret not spending the extra money. It's definitely worth it.

You walk up to the D7000 rig thinking "Psh, my D5000s tear these things apart on all the graphs, this is gonna be underwhelming!". You sit down, put them on, jaw drops, and you immediately go sell your D5000s for them.

interesting.I find the d5000 balanced and detailed,more detailed than the hd650 and slighlty less than k701.I also find their bass is less than the hd650 which is surprising but I don't find the d5000 bass heavy.I can't describe their bass now,I need more time with them but there is something wrong with it which I don't know.it is not defined and controlled like the hd650.....it seems it is bloated with no texture....I really don't know.But at this point they are not bass heavy and I wouldn't be surprised if the hd800 have more bass,at least the hd650 does.
portable:ipod touch 2g(32gigs)->jh13/GR07
Home:->wa6+sophia princess->jh13/HD800