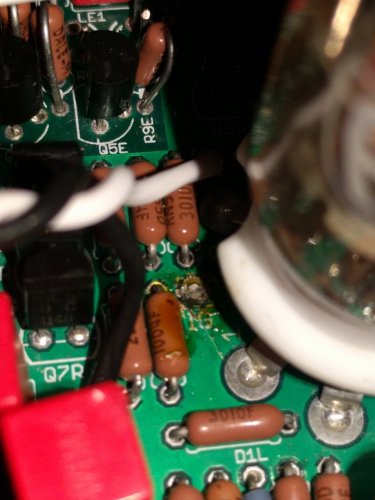 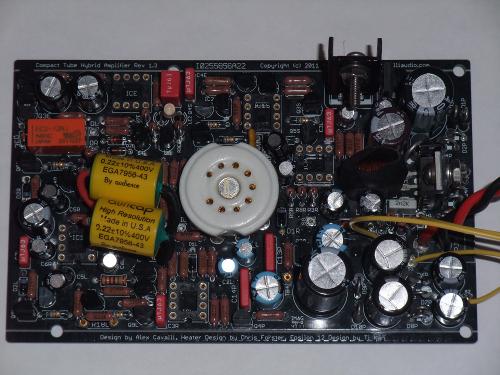 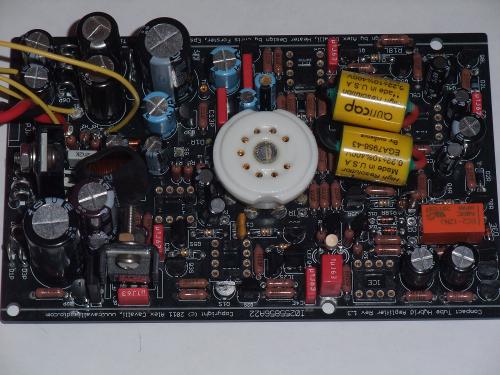 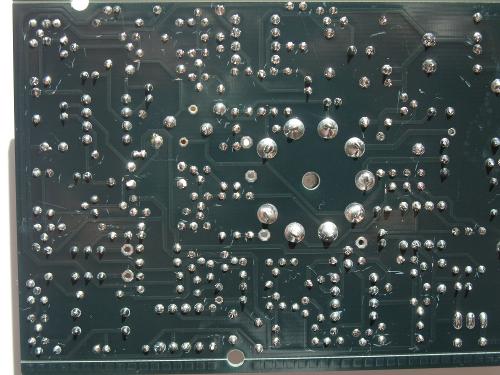 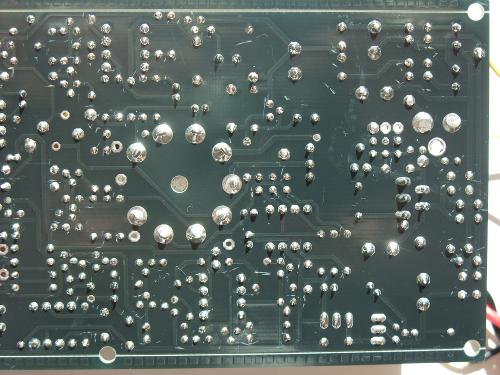 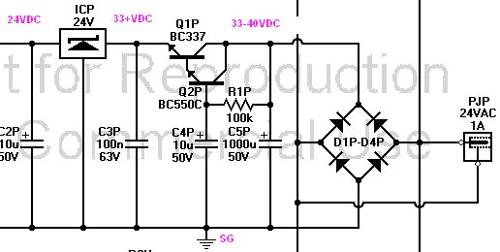 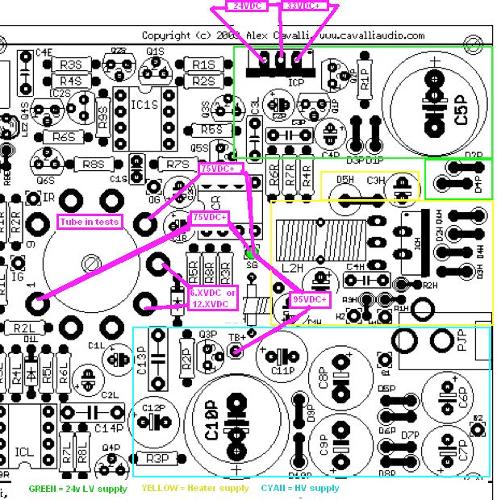 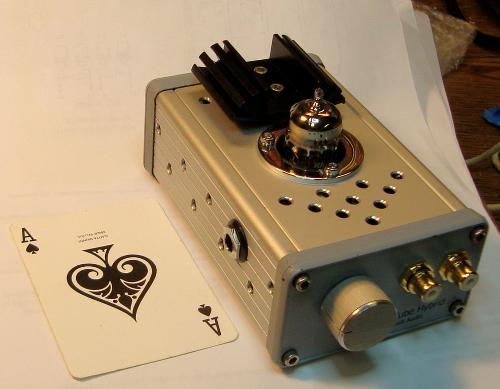 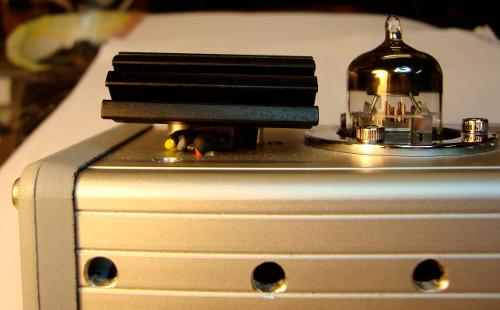 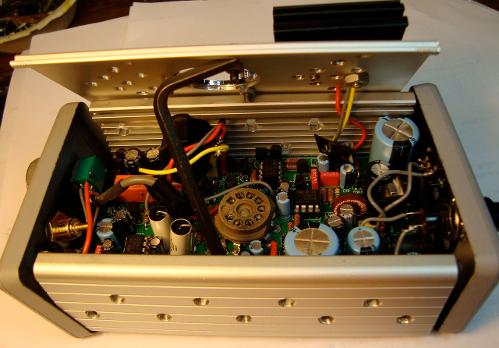 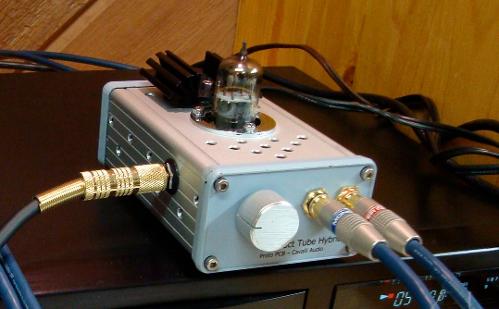 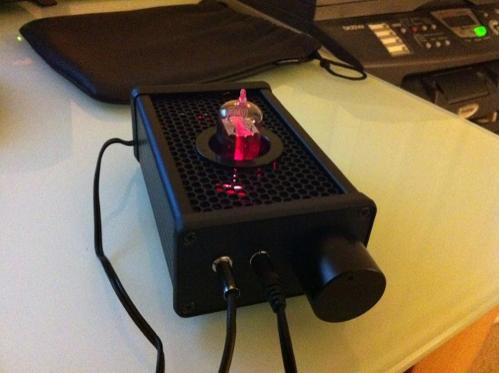 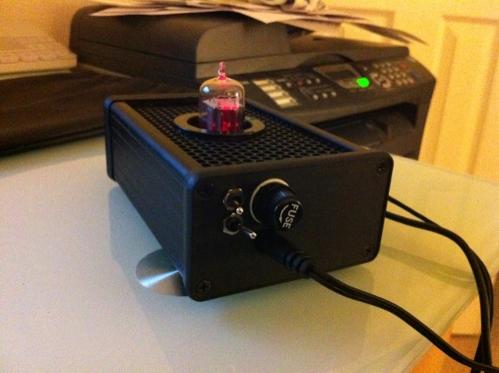 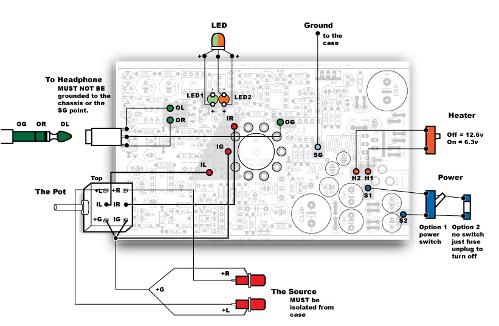 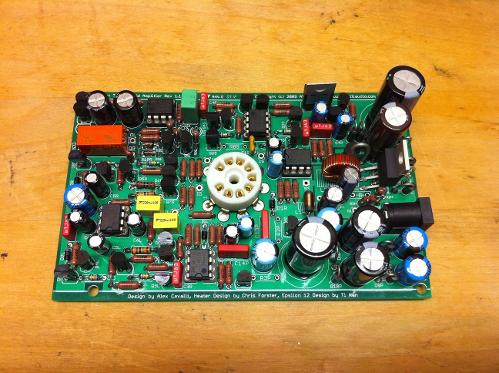 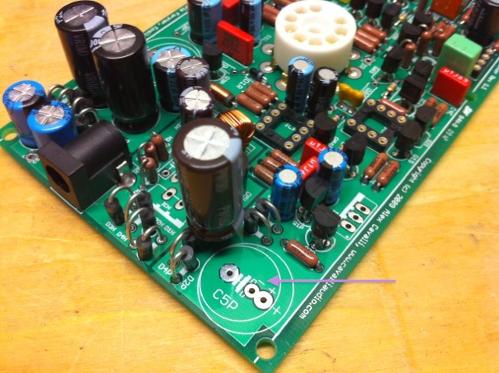 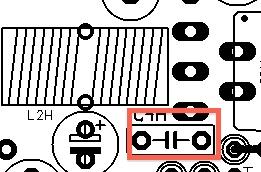 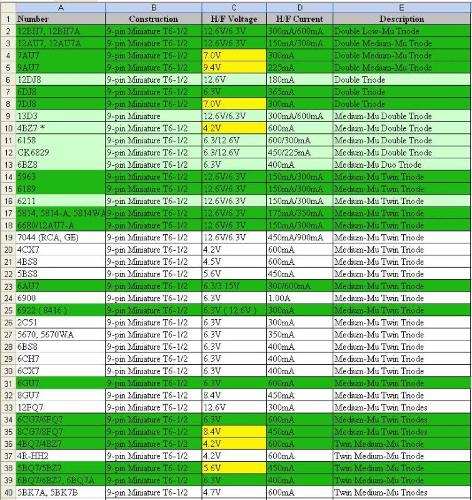 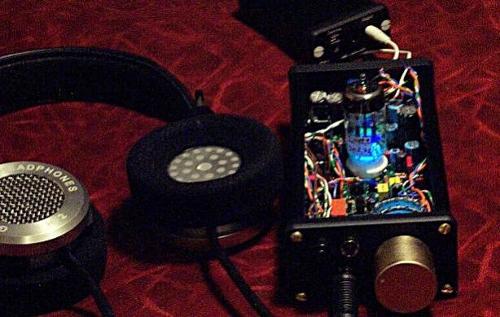 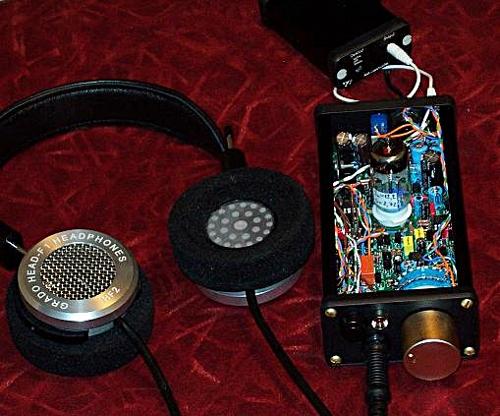 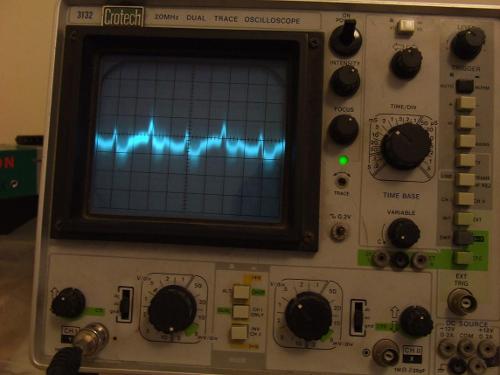 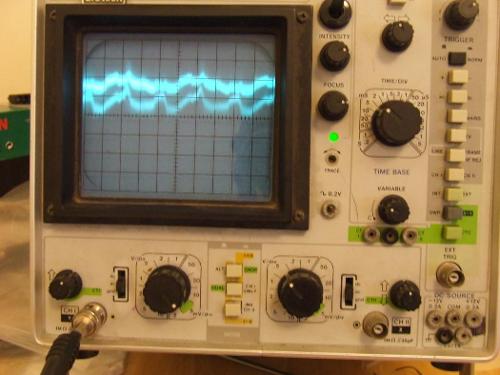 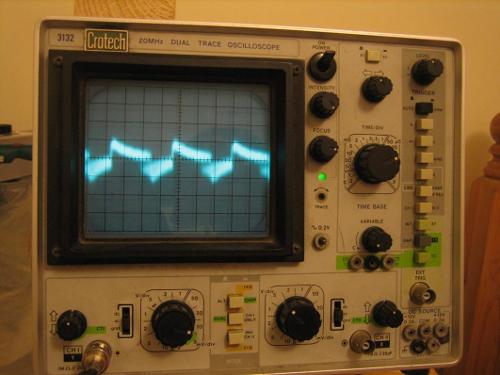 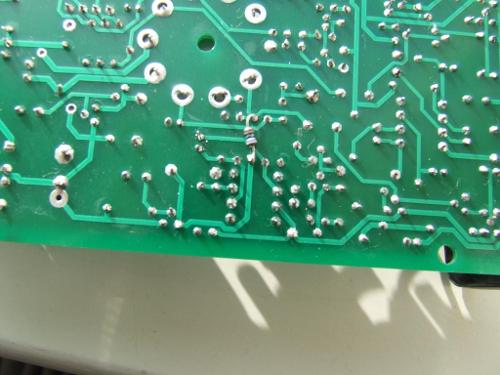 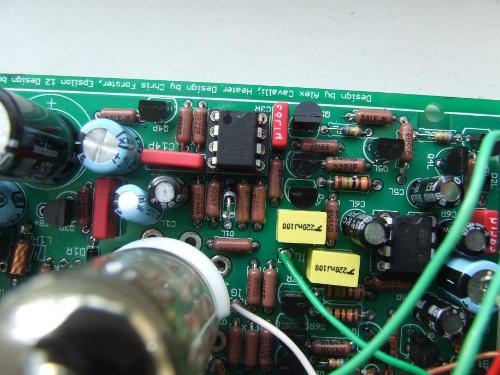 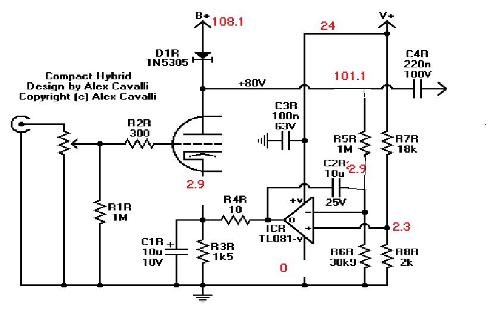 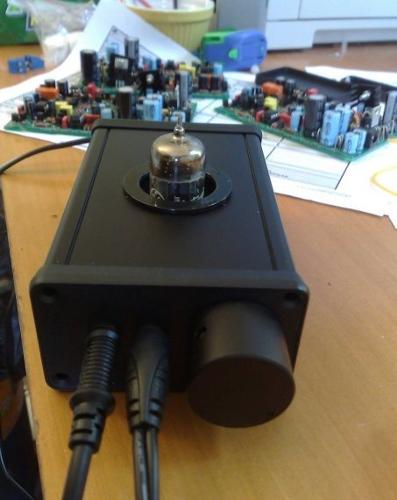 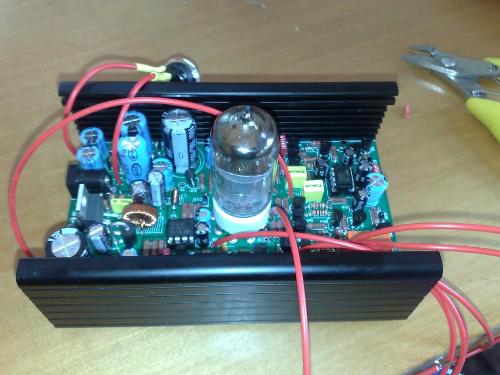 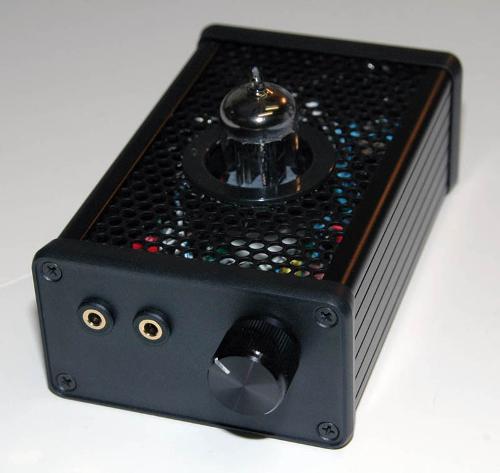 See full thread gallery...
You are using an out of date browser. It may not display this or other websites correctly.
You should upgrade or use an alternative browser.
A Very Compact Hybrid Amp

Member of the Trade

Thats where the Tube Adventure begins my friend.. Buying different tubes, trading with others, trying various different ones. That's where CTH is very cool because it will accommodate many different tube models.

http://www.head-fi.org/forums/f6/pos...ml#post5438291
You've got cucumbers on your ears
Too much time spent on nothing

I hope this ends up in kit form, if it does then I want 3.

^ I'd be in for a complete kit with custom panels/case
Feedback: Old Head-Fi eBay

Yeah, I am thinking they would make great gifts. I also have a nice stash of 12AU7/ECC82 tubes for my Raptor and that makes it even sweeter.

Well, I'm impressed. My SOHA Jr. (or whatever it eventually will be called) is up and running, and it's sounding pretty great with an RCA 5963 that I fished at random out of the 'AU7 box. I tend to fall in love with every new amp that I build, but I think this little guy is something special- a true all-around performer. Once I get the casing finished up I look forward to exploring the various dual triodes in my collection to see how well they fit.

It was a little trouble getting here, as my left channel DC offset wouldn't settle properly at first. Happily, Alex and I managed to work out an adjustment to the servo mechanism that solves this problem and makes the amp warm up faster to boot. The final version of the amp will have this modification by default.

Would you say it was a difficult build?
Feedback: Old Head-Fi eBay

Not exceedingly difficult: the process of assembly was similar to any other through-hole board. However, the density of parts on this board is significantly higher than in most amplifiers, which leaves out several luxuries present in other builds. For example, part labels are small almost uniformly under parts, making verification of correct placement sometimes difficult, and the connection points for inputs, outputs, and switches are in somewhat odd locations when compared to the nice terminal blocks that you would get with a SOHA II or Millett Hybrid. I made one transposition of parts during initial assembly, which required desoldering and replacing four transistors, and as mentioned above I had some issues with the prototype circuit which should not be present in the final build.

On the plus side, there are no adjustments to make, and casing, the weak point of myself and many others, does not require the precision needed for amps where headphone jacks and volume potentiometers are integral to the board. Overall, I'd say with few reservations that anyone who has previously completed an amplifier of moderate complexity should have little trouble building this. From your sig, you've been making CMOYs- has that been going well? Have you had problems with any that you managed to successfully debug? If you're confident you can run through assembly and do basic debugging (ie, multimeter measurements, desoldering parts) then I'd say go for it.

Alfiax... thanks for your diligence in tracking down the servo issue - it's what the proto process is all about. We de-solder so you don't have to!

As to complexity, everything you said is true. I had just come off a the Gamma 1 build, with a few surface mount chips but lots of room around them. The build requires some dilligence, but if you follow some DIY best practices (keep large printout of the silkscreen, measure and double check everything, mark off parts as you go) it's quite straightforward, but I would say get a few builds under your belt before attempting it...


BTW, the stupid 'light pipe' I built was bugging me, so I tweaked some of the LEDs: http://www.head-fi.org/forums/f6/pos...ml#post5441867
You've got cucumbers on your ears
Too much time spent on nothing

But I think it does offer an amazing level of performance for the price...

I can't recommend the 12BH7 strongly enough for this amp...
You've got cucumbers on your ears
Too much time spent on nothing

I found the CMOY relatively easy to build, and I also finished building a mini3 and RA1 clone.

Sounds like I'll have to be extra careful when placing components since they're so close to each other. With the mini3, I didn't find that hard because I had the parts list and parts marked so I could just follow the PCB (I can't read schematic).
Feedback: Old Head-Fi eBay

I am running 12BH7A's in my SOHA II, and agree that they sound great.

Oh noes!!! look what you guys did, now im gonna have to head to the bay and find some 12bh7s!!


Lucky you!I have a lot of postponed chores to do this weekend!

In all fairness, my SO was very tolerant while I was 'prepping for the meet' last weekend...

Would you like a BH7A? I'd be happy to send one up your way...
You've got cucumbers on your ears
Too much time spent on nothing
You must log in or register to reply here.