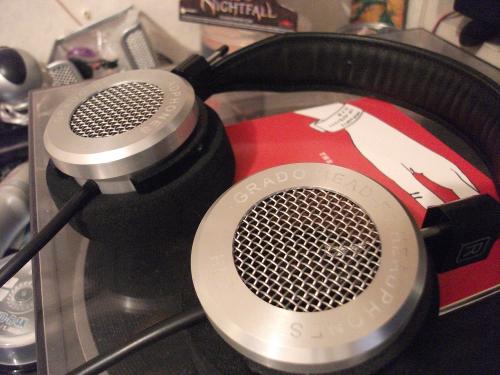 You are using an out of date browser. It may not display this or other websites correctly.
You should upgrade or use an alternative browser.
A very belated Grado HF2 review

People don't usually review headphones three years after purchasing them but I feel obliged to review the cans which effectively ended my head-fi journey. This won't be incredibly lengthy (he says before accidentally writing something incredibly lengthy.) I will be selling them for reasons which I will delve into later, and I want to get my impressions down before they go.

But first, some background. Of course you can skip it if you want.

The Alessandro MS1's were my first audiophile headphones and I absolutely loved them. They were so intense and crunchy. I loved the way they made me feel the energy of the music. Despite this I couldn't just stop there (this is head-fi after all) so I picked up some Sennheiser HD580's. I liked them for music which suited the extra space like Jazz and Folk but found them too dark and didn’t listen to enough of the genres I enjoyed them with. Eventually, and unexpectedly, the Audio Technica AD700's drove me to sell the MS1's since for me they struck the perfect balance between space and energy. They've stuck with me to this day because of their versatility, huge soundstage, and sweet tonality. My discovery of Etymotics, however, lead to a quest for detail and after trying the AKG K701, '03 Beyerdynamic DT880 and Stax Lambda Pro I eventually realized nothing full sized really sounded like Ety's and returned to the AD700.

Although I still very much enjoyed the AD700's sound signature, my foray into higher end headphones had left me unsatisfied with them. The DT880's in particular impressed me greatly with their detail and more neutral presentation, and I would have kept them if it weren't for the awfully recessed mids. I wanted more, and when the HF2's were announced I impulsively jumped on them for a number of reasons. I wanted to know what a higher end Grado sounded like, if they fixed the issues I had with the MS1's. I also liked that Grado took the time to create something special for the Head-Fi community. As it would happen, the HF2's DID fix the issues I had with the MS1's and aside from a brief experiment with the Grado SR225 they have been my primary music headphone for multiple years. I had no reason to return to Head-Fi because of them. I was done.
So I guess I'll begin my sound impressions. These are all with the stock bowls through my Little Dot MKII and Beresford TC-7510. First the highs. The highs are what set these apart from other headphones I've heard. They seem to manage to be very present and sparkly without being overpowering or fatiguing. They're just SO clear and detailed, yet are still balanced. The highs on the MS1i in comparison sound grainy and smushy (please forgive my non-standard audiophile terminology, I've been out of the game for a while) and tend to make things sound overly bright and sibilant. The overall tone on the HF2 doesn't even sound particularly bright to me.

Now for the mids. The mids are more bright than they are warm, however they’re not as bright as the MS1’s or even the AD700. The HF2 mids are just a tad more neutral and sound less “nasal” than the MS1i. This is another thing which attracts me to the HF2s. They’re most definitely Grado but they’re a slightly more neutral and “realistic” Grado, whilst still retaining most of the Grado magic. They still have the energy.

And the lows… The bass greatly contributes to the overall darkish tone. Compared to the MS1i’s it’s definitely more prominent. If I had one criticism it would be that the bass is slightly looser than I like it to be, but this probably isn’t helped by the tube amp. I mean it definitely isn’t boomy but there’s definitely a mid-bass hump going on. I’m not really a fan of bass in headphones. I was perfectly happy with the bass-recessed AD700’s. But I don’t really mind having a little more bass, and I think it actually adds to the energy. It gives electric guitars a little boost in the low end which makes them punch harder. It makes everything sound thicker and fuller. It also extends fairly deeply, but the mid bass hump can cause the deep bass to get overwhelmed by the mid bass. I much prefer the bass on the DT880’s if we’re comparing individual sound characteristics, but I think the HF2’s bass works well in the context of the HF2’s.

What apout soundstage? These are Grado’s so soundstage width and depth isn’t really what they’re about. Placement is excellent, and they have enough width to create a good sense of space. They don’t sound closed and boxed in like I remember my MS1’s sounding, or like the MS1i’s sound today. There’s space and “air” between instruments which isn’t there on the MS1i. Things sound less congested in more complex passages. It’s good.
When you've been enjoying a single pair of headphones for so long it's difficult to objectively explain why you like them. They just sound so right. Returning to them after listening to the AD700's for a while, or even some borrowed MS1i's, is like coming home. Every aspect of the sound comes together perfectly.

So why am I selling them? Basically as a starving student I can no longer justify having $400 headphones. Sure I love them, but I also love my AD700’s. I definitely don’t enjoy them four times as much as the AD700’s, despite paying four times as much for them. I’m also hoping to get into some home recording would benefit from something more neutral and revealing. I have a pair of K240 Sextetts on the way and they should satisfy me sufficiently. If not I’ll keep looking until I find something which at least partially fills the HF2 shaped hole in my heart.
Have: Koss KSC-75, Koss Porta Pro, AKG K240 Sextett LP, Alessandro MS1
Had: Sennheiser HD580, Westone UM1, AKG K270 Playback, AKG K701, Beyerdynamic DT880/250, Etymotic ER6i, AKG K141 Silver, Stax Lambda Pro, Grado SR225, Grado HF2, Audio Technica AD700

I love the in your face style of them, I must say, the longer I listen to them....the better they sound.

I really believe that they sound better now, then they ever have, I also think they are not quite as in your face as they were new.

I love the in your face style of them, I must say, the longer I listen to them....the better they sound.

I really believe that they sound better now, then they ever have, I also think they are not quite as in your face as they were new.

Anyway...I a thinking about trying the RS1i....like you though....I wonder if the extra cash is worth it, coming from 325i's.
Click to expand...


The highest end Grado I've had aside from the HF2 is the SR225 but I didn't write down my impressions so I can't really remember what they sounded like... There's definitely a point of diminishing returns. The sound upgrade you get from your first pair is definitely much larger than another step up. Whether it's worth it or not depends on your priorities really.
Have: Koss KSC-75, Koss Porta Pro, AKG K240 Sextett LP, Alessandro MS1
Had: Sennheiser HD580, Westone UM1, AKG K270 Playback, AKG K701, Beyerdynamic DT880/250, Etymotic ER6i, AKG K141 Silver, Stax Lambda Pro, Grado SR225, Grado HF2, Audio Technica AD700

I really have to get some Grado's after I sold my SR80i's. I went to DT880's so I could get a relaxing can for laying in bed and listening. But the thing is, I could've used the SR80i for the day where I would get pumped up. But the DT880's destroyed them in every way. So now I need a better SR80i, like a magnum Grado

DT880's relaxing? I didn't find them relaxing at all... Way too detailed and trebly. Most comfortable headphones I've ever owned though. More comfortable with them on than off.

fraseyboy said:
DT880's relaxing? I didn't find them relaxing at all... Way too detailed and trebly. Most comfortable headphones I've ever owned though. More comfortable with them on than off.