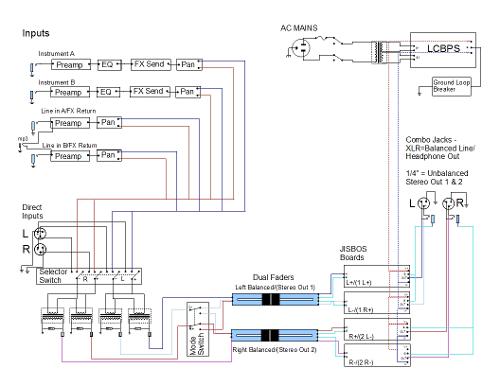 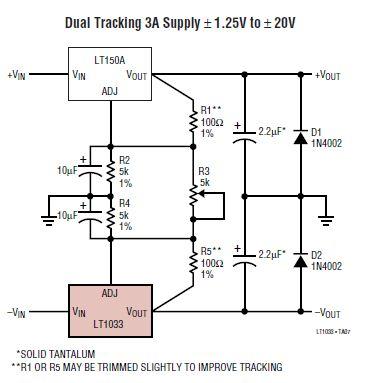 EDIT:  This design has gone through a bit of re-working.  Jump to the major revisions here.


It was suggested to me on a number of occasions that a balanced JISBOS with a little gain might be a good accompaniment to my E-Mu 1212m. I have some other switching/source needs, so one thing led to another, and....

Caveats - This is just a "work-in-progress" basic block diagram--and has a lot yet to be desired. A really well thought-out ground path, for example, needs to be worked out. Power supply needs to be added in (I'm planning on an LCBPS). In an effort to make this as "idiot-proof" as possible, there's perhaps more switches in the signal path than I would like (a total of 5 between input and line out if you count the normalled TRS jacks), but I really didn't want a situation where you might be sending out-of phase signals or a gained signal to a line output.

A brief overview of each section:

INPUTS
Obviously, I wanted balanced input capability from my 1212m. I also needed the ability to patch in an unbalanced line-in from a tuner, and sometimes an input from a DAP. I threw in the DAC just as a placeholder for "future expansion." OPUS or y2, anyone?

SIGNAL SELECT
For signal selection, I'm thinking of a 4 pole, 12 load rotary switch like the NKK MRA403. Break-before-make, looks solidly built, and not too expensive. There are also some options I found on E-bay but it's a bit of a crap-shoot.

BALANCED or Dual-Stereo MODE
The "Mode Switch" reverses L+ and R- so you end up with the positive and negative phases for each channel paired. Doing this in conjunction with Alps stereo faders enables manipulation of a single balanced stereo output ganging the two faders, or two unbalanced stereo outputs with their own volume controls. An additional 4 poles on this switch would send the appropriate buffered signals to their respective balanced or unbalanced line outputs on the back of the preamp. I suppose you could add a phase inverter before Line Output 2 if you wanted to drive, say, a stereo amp and send a second signal to a subwoofer.

HEADPHONE OUT
For now I'm settling on dual 1/4" TRS jacks for the headphone output. Not strictly kosher, I know, but having the switching between headphones and speakers integrated into the jack is a bit more elegant than yet one more rotary switch, I think. In "unbalanced" mode, it also has the virtue of being able to handle two standard headphone plugs with no additional modding or adaptors.

GAIN SWITCH
The Gain Switch would tap between the appropriate spots on the JISBOS buffer signal and divert the signal through resistor dividers and back to the boards. The specifics for adding gain to the JISBOS are in this thread, and there's quite some discussion about it on Headwize as well.

I'm not sure if this was necessary, but I added a "gain defeat" feature that prevents the signal from the JISBOS boards reaching the rear line outputs when gain is switched on. Technically the gain would only be 4.

I have a number of questions about the design:

2.) Is it necessary to defeat gained output going to the line outs, or am I being overly cautious?
3.) Is there any way I can simplify this thing?
4.) Is there a better way I can do all the switching--and still have it be cost-effective?
5.)Any suggestions as I work out the ground paths? I do want to try and minimize unnecessary crosstalk and other grounding issues as much as possible.
6.)Looking towards the DAC, would either the OPUS or the y2 lend themselves to this application? Would they be reasonable upgrades from my 1212m?

I know it seems silly to name it since it's only amalgamation of existing circuits, but I've toyed with naming it the "Odyssey," since I sold my beloved old game console to help finance the project...

...or perhaps because that's what the signal has to go on to find an output somewhere.

I'd appreciate any other quips, comments or suggestions as well. Thanks for looking!

Would the use of audio transformers be out of the question here?

For the purposes of the design, of course they could be used. I've gathered decent audio transformers are generally preferred to OPAMP-based solutions.

For my own build, I'm trying to keep costs contained as much as possible. My only personal experience with transformers were the el-cheapo Ratshack in-line adapters. I kind of figured if I have to cut back someplace, I could do better with an OPAMP rather than a cheap transformer.
----Zaubertuba

Ok. Was just thinking that transformers could help simplify things a bit as well as add some additional benefits.

For example, at the input, they would let you use balanced or unbalanced inputs without having to do any adapting with an opamp. It would also give you good common-mode rejection even with unbalanced sources, and of course it would eliminate any ground loop issues.

On the outputs, they would allow you to use balanced or unbalanced headphones.

Oooh. The benefits may very well be worth it. Looks like I need to read up a bit more.

Where could I see examples of them used in this application?

Also, regarding the JISBOS boards: I was planning to use the kits offered by Glass Jar Audio, but I noticed in this thread NelsonVandal used different values to optimize the circuit. Is there a compelling reason to build the boards up with NV's instead of going with the kits?
----Zaubertuba

Since you're using four JISBOS total (two per channel), I'd recommend using the input transformers in pairs, like this (though you'd use 1:1 trannies instead of 1:10, and you could wire the primaries in either series or parallel):

As for the output trannies, I'd have to draw you up something.

Can't say that I see anything particularly "compelling." Chasing after numbers doesn't inherently result in the best sound in my opinion.

Thanks for the link. So it would look like:

So far, basically allowing me to eliminate the "Mode" Switch output switching, which would be a good thing.

Those Transformers go for $100/pop. Ee-youch!

Assuming the output stage is constructed similarly, that adds $800 to the project. The question is, will implementing the transformer stages take this from a "Mid-Fi" -sounding project to a "Hi-Fi" sounding project?

Thanks--It seems the parts selection on the Glass Jar kits is actually pretty nice. Don't know if I could do much better tracking down the parts myself anyway.

That looks right, though you left the mode switch in that you say below could be eliminated.

No no, I didn't mean to use the specific transformers in that application note. I only referenced it to illustrate how the transformers you do use would be wired up.

I'd go with the CineMag CMLI-15/15Bs which I think around $40-$45 a pop, I'll have to check. And the output transformers wouldn't be used in pairs like the input transformers so you'd only use two in all and they're about $35 a pop.

I meant to say I could eliminate the extra poles on the Mode Switch that are feeding the balanced and unbalanced line outs. Perhaps I can come up with a better implementation--maybe just integrating the mode switch with the selector switch? I could do it with a 4 pole, 6-throw switch. I'd like to keep the ability to swap L+ and R- since it enables me to have two separately controlled unbalanced headphone out jacks. I want to be able to separately control two headphones, even if they have different impedances/sensitivities, for when I'm listening to music with one of my boys or watching a movie late at night with the wife.

<Picks up jaw off floor> Ahh..that's much more manageable. I also noticed it looks like I could even find some of the jensens on e-bay if I'm patient.

It's certainly a "busy" design.

The current President of CineMag is Tom Reichenbach. Most of Jensen's transformer line was designed for Deane Jensen by Tom's father, Ed Reichenbach, who also designed transformers for Altec.

LOL--When you have to start color coding just so it's easier to track the signal paths, you know you're in trouble. I excel at "complicated."

...Regarding these three questions, I found my own answer...

AMB pointed out on another thread:

And I found another DIY balanced preamp build online that had a gain set at 5 as well.

Balanced JISBOS will have a total gain of 4. I don't think I'll have any problems--I'll drop the gain switch and will wire the boards directly for gain. Revised drawing to come...

Hey, if they're the same quality, but cheaper, I'm all for it. Only reason I mentioned it is I just saw a pair of older Jensen output transformers on ebay for $39.

Nothing wrong with that. Better than excelling at something far worse. Like, crack dealer or something.

Yeah, gain of 4 should be fine especially given your source, which according to its spec sheet can do up to +20dBu from its balanced outputs. That's 7.75 volts.

No no! Not cheaper. It's "less expensive."

What, there's life outside of Head-Fi?!

I kinda figured. Just for the heck of it, I've really been wanting to run the card closer to "full throttle" at the pro- output setting. My a47 is running at a gain of 6 and I'm ramping the volume down in PatchMix pretty heavily even at the consumer (-10dBv) setting.

Of course. I usually approach my wife with purchases like this by saying, "hey honey, I saved some money."

Yep. Those are the ones. But at second glance, are those actually output transformers?

I noticed most of the new transformers are shielded, so I expect I'd need to add a farraday cage if I used open-frame transformers like these anyway? I was planning on shielding the torroidal transformer in the power supply anyway.
----Zaubertuba

Still have to add grounding and power supply, but here's a simplified re-vamp:

Lost the Opamp, one switch, twelve poles and a heckuva lot of air-wiring.

Yes, it's true! I'd heard rumors about it for years, but just wrote them off as flights of fancy. But the other day I felt a tap on my shoulder. I turned around and to my shock and horror, was face to face with life outside of HeadFi!

Yeah. Gotta run it up a bit so the gunk doesn't build up.

That outta work. I mean, it's worked for women for centuries. Might as well learn a few of their tricks.

Output trannies typically aren't shielded. It's input trannies that you'll find shielded and with Faraday shields between their primaries and secondaries.

However I had CineMag make me a nude 15/15B input trannie and as long as I didn't park it on top of a power transformer, it was dead quiet.