Menu
Log in
Register
Install the app
You are using an out of date browser. It may not display this or other websites correctly.
You should upgrade or use an alternative browser.
A headphone noob says "hi" -- and a tale of a blown opportunity

I've been lurking on this forum for a little while and wanted to introduce myself and say "Thanks!" for all of the great info I've learned from this board.
Since I don't want to be too off topic, I'll at least talk about some headphone sutff

Before getting into headphones (and discovering this forum), I found myself spending less and less time with my stereo system. There were two main reasons for that: 1) I've been doing a lot more computer stuff lately and the stereo is another room, and 2) We have a 10mo old baby and once she's asleep I don't want to wake her with the stereo.

I started out listening to a pair of cheapo earbuds connected to the headphone jack of my logitech computer speakers. Needless to say the sound left a lot to be desired.

So I started thinking about building a pretty good PC audio system and getting some good headphones to go along with that. I talked to my dad, who used to be heavy into audio gear a long time ago (For the last 30 years my mom has told the story of how my dad spent several months' salary on his stereo system -- Rectilinear III speakers at that time (early 70s?).

So anyways my dad says he has some old headphones he doesn't use any more and offered to send them to me. This is what he sent: 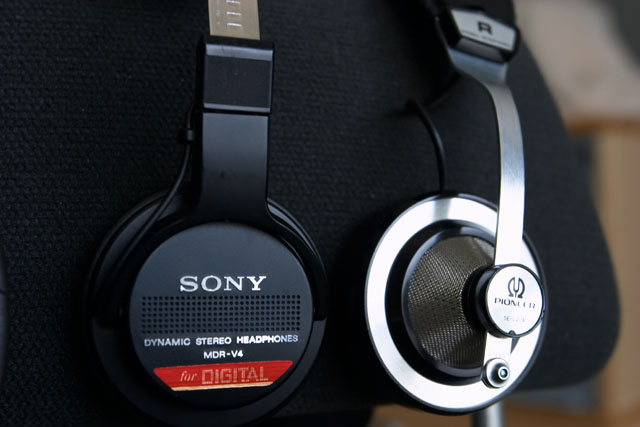 Anyways I get his package and first listen to the Sony MDR-V4. Wow, a lot better than the cheapo ear buds I had before. After listening to the MDR-V4 for awhile, I decided while it was a drastic improvement over the ear buds, the highs were tinny. So then I try out the other pair my dad sent. I remember seeing my dad use these when I was a kid. They are Pioneer SE-L20A.

So I'm listening to the first track and immediately the old Pioneers (again early 70's gear?) sounded so lifeless compared to the Sony. I was just about to take the Pioneers off when all of a sudden this amazing bass comes through. Amazing in that I could not only hear it, but feel it. I can't believe that headphones that are over 30 years old can reproduce bass so well. So I listen intently, and rumble rumble, there it is again! A smile breaks out, amazing! I can't believe it. Let me switch back to the Sony's and listen to that same spot. As soon as I take the Pioneer off I realize why the bass sounded so good....

The night before after I ripped the 1812 cd to my hard drive I took the original cd and put it into my main stereo system to see what I liked better -- audio through my PC or on my main stereo. Coincidentally enough, as I was doing the headphone testing listening to the 1812 Overature, my wife decided to turn on some music for the baby to listen to. And what was in the cd player? 1812 overature. hahaha, no wonder these old pioneer's had such excellent bass. it wasn't the headphone that was generating the bass, but my velodyne sub which happened to be playiing the same track which my wife started around the same time I started my testing.

Anyways I decided to get a good setup since I spend a lot of time in front of the computer. I ended up ordering the Senn 650 (from Todd the Vinyl Junkie, excellent service BTW). I also ordered the MG Head Mk III from Audio Advisor which I hope gets here soon. The Senns sound a LOT better than the other two headphones I listened to...

The Senn is the best of the bunch (no surprise). 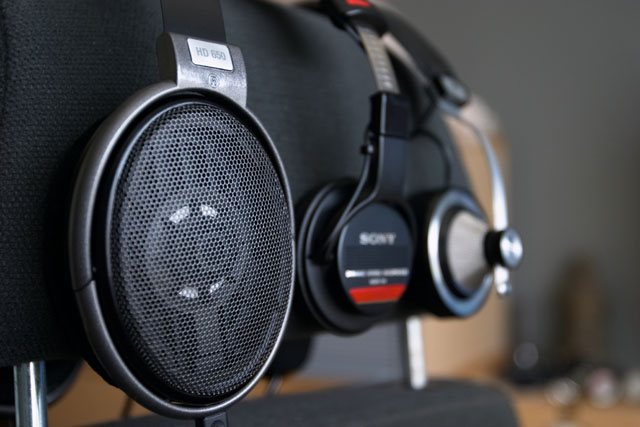 Oh, and the tale of the lost opportunity. After getting the Senns I was talking to my dad and telling him what I decided to do. Anyways, I mentioned that I ordered a tube amp to go with the headphones. As we discussed the tube gear, I mentioned that I may try to find Sylvania 5751 tubes to replace the stock one in the MG Head. My dad mentioned that he worked at Sylvania for forty something years. I said I thought you worked for GTE? He said he was originally hired at Sylvania, but Sylvania got bought by GTE (I didn't know that).

Anyways he mentions that he still has a bunch of old milspec tubes from his days at Sylvania. I said Wow! That stuff may be worth a lot of money! He goes to check the garage where he keeps his odds and ends... and then comes back and says "oops, I forgot I threw them out maybe a year ago when I cleaned out the garage" oh bummer.....

Anyways, that's enough rambling for now! I just wanted to say "hi", introduce myself, and say "thanks!!!!" for the greeeaaat info and friendly members of this board! 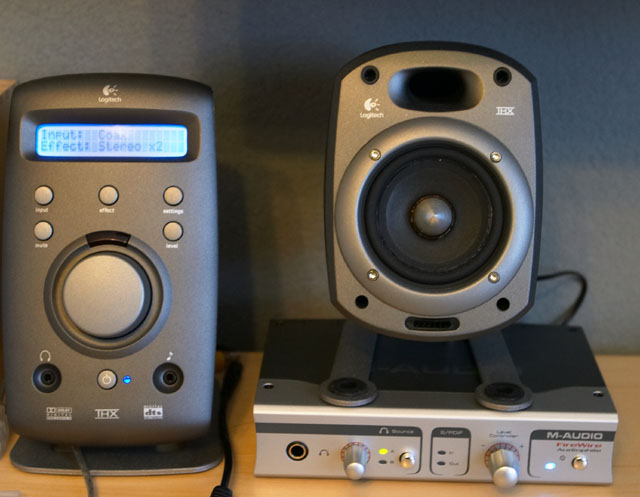 Welcome to head-fi! Sorry about your wallet


Shame about your dad throwing away those tubes, but then again stuff like that happens all the time. Those pioneer headphones are very interesting looking, they remind me of Grados. The 650's are amazing phones, huh? I'm sure once you get the MG Head you'll enjoy them even more. I've been through several different high-end headphones (CD3000's, DT880's, etc) and I've always come back to the Senn's. Anyways, welcome and enjoy your stay!
Team
Stax //Westone// PC Source// Solid State

Welcome to head-fi, your wallet is apparently already in therapy.

Yeah, we all have our missed opportunities. I purposefully broke the very headphones that opened the door for me, the Beyerdynamic dt990 600ohm version. And then to poor salt on the wound I replaced them with the Sennheiser HD500s. Now that's just cruel.

But shame on your dad, he's an audiophile and plainly has no excuse for throwing out tubes. My system is all solid-state, and even I wouldn't throw out the tubes.

LOL, welcome to Head-Fi, the assault on your wallet has just begun! Run away now before it takes all your money!
Proud member of Team Stealth.
Proud member of Fuzzy Fuzz's Fuzzbox.

Welcome to headfi. Doesn't the 1812 overature track have those cannon shots? I hope it doesnt wake the baby up

Wow, straight to the top HD650. A cost/time effective move. Congrats and welcome to head-fi.

Ouch, he could've made a furtune selling 'em off Ebay and here

Once my old (and truly great - a rare thing in HS bands) HS band was playing that. It was great - 172 people who were all actually trying to make music (which doesn't often happen)... and then at the bit where the canons come in, all the percussion could find was a cowbell. This just made everyone crack up including the director. The rest of rehearsal was useless after that.

The French approach the gates of St. Petersburg and are greeted by... the cows.

I had a similar story when auditioning some monitor speakers in Circuit City. I read a lot about how good these Polk speakers were, and when I tried them out I was simply blown away. They put out so much bass it wasn't even funny. While waiting for a salesman to talk to I checked the board to see if anything else was in the system. There wasn't. Then, I looked around and saw this rather large sub near the video screen. I reached under it only to find the rather HUGE sub was bounding around quite a bit. I was bummed. The sound was so good I figured these things were the bargain of the century. When you factor in the $1000 sub they weren't such a bargain anymore.

Anywho, congrats on finding out how much you liked your Sennheisers. IT's always good when you find something you like and enjoy so much.
"...﻿If anyone thinks he knows something, he has not yet learned it as he ought to know it."

The M-Audio Audiophile 24/96 Firewire looks interesting. Is it worth the money?

I found the sats to be lacking highs and the sub, though powerful, very undefined and boomy. When I was auditioning PC speakers the choice was between the 680's and Klipsch's flagship system at the time (Promedia 5.1's). The Klipsch Promedia's sound much better...though are also a bit more expensive.
Feel the rhythm with your hands
Steal the rhythm while you can...


Yeah, I would tend to agree with that asessment. I have the sub turned almost all the way down (about 7% volume) and it still sounds kinda boomy and uneven at times. I'm also not really big on lots of highs, but I still have to boost it starting around 4000Hz. I was hoping upgrading my soundstorm SC would help in this dept.

The one thing I WILL say for the z-680, it is the epitome of convenience. Every kind of connection you can imagine, built in Dolby Digital decoding, wireless remote, excellent mounting brackets, and it accepts all standard gagues of speaker wire, unlike creative speakers which have their own cheezy wiring with RCA connects on them that are a pain to replace if they're not long enough or you break them. Also, when it comes to action DVDs, the z-680 really is awesome. I don't know if the DVDs just tend to hide its flaws or what, but MAN I love popping in Aliens or Jurassic Park (the tyrannasaur's "THUD" when it first approaches is friggin AWESOME)

Interesting story you have there. It is such a pity your dad threw those tubes away. I bet your daughter will grow up an avid head-fier!

Welcome to Head-Fi! If you stick around long enough you'll learn not to love money. It is the root of all evil anyways.