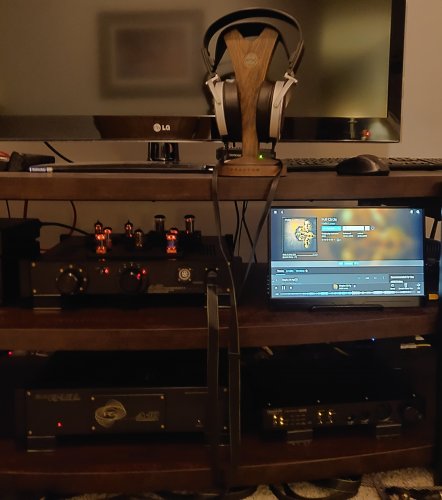 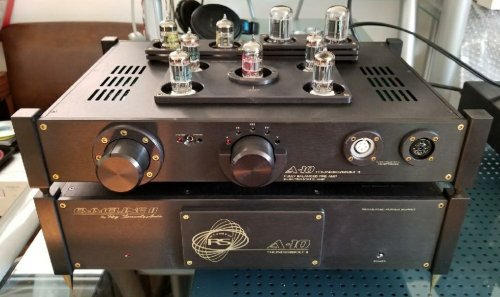 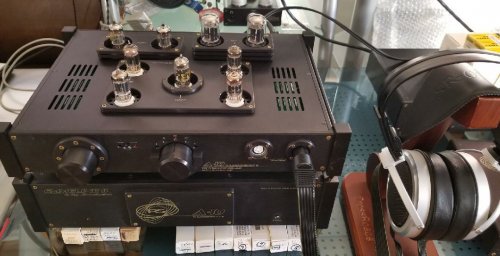 You are using an out of date browser. It may not display this or other websites correctly.
You should upgrade or use an alternative browser.
A-10 Thunderbolt ll, Fully Balanced Electrostatic Amp/Pre-Amp

Head-Fi Feedback
"The point of diminishing returns is in the thousands, not billions." - Uncle Erik

Serial number 2 is now in my house. I need to get some more listening time before I give it an official review (I'll post one next weekend, and from what I can hear so far, it's going to be a pretty long review, with a lot of good stuff to say), but there are a couple of things that I can say right off the bat.

First of all, pictures don't do justice to this amp. It is, flat out, the best looking headphone amp I've ever seen. I was more or less expecting a B-52 with an extra tube; while it does share some features with the B-52, it is much more refined. The rails on the sides of the components are my favorite aesthetic feature.

I'll reserve most of my thoughts on the sound for later, but the one thing that leaps out is microdynamics. Simply put, they're on a level that I've never before experienced with any audio equipment.

I am trying to decide between upgrading my Stealth to either the A-10 or B-52.  I think the A-10 is the better pre-amp but I am not sure I want the electrostat headphones as all have our dynamic headphones.

Does anyone have experience using the tape loop on the A-10, either balanced or single ended, to drive a regular headphone amplifier?

Having compared the B52 and A10 in my system side by side, I was extremely interested in the preamp performance.  The B52 and A10 preamp sound EXACTLY the same.  I mean note for note, exactly the same provided the input tubes are the same.

The good thing about the A10 over the B52 is that the A10 ALWAYS provides balanced output due to the use of a phase splitter (that extra tube).  The B52 on the other hand is balanced, if the input is balanced and single ended, if the input is single ended.  What you put in is what you get out.  That was my VERY main concern as I use the B52 as a preamp first and headphone amp second.

However, the build quality of the A10 is even better than the B52.  The chassis is to die for, drop dead gorgeous and much heavier as well.  Kudos to Ray for the excellent redesign.

Finally, the choice between the A10 and B52 really comes down to what headphones you want to use.  Electrostatics or dynamic headphones...pick your poison

"We don't like their sound, and guitar music is on the way out."
- Decca Recording Co. rejecting the Beatles, 1962

Thanks Shaizada for the comments.  I am surprised the 12AU7 family would sound the same as the 6SN7.  Did you do any tube rolling or would both stock tubes?

You bet!  Infact, the way it happened was when we plugged in the A10, it was using Telefunken 12AX7 tubes on the input side.  They were the smooth plates.  I was using 12AU7 Telefunken smooth plates on my B52 at the time.  So Ray and I played some music on the B52 and really enjoyed it.  Then we switched in the A10 and there was a significant difference in sound.  The A10 was quite a bit better sounding with more definition, clarity, resolving of subtleties in the music... Frankly I was stunned as was Ray.

I was like...here we go again.  I need to figure out HOW to purchase the A10.  Ray was stunned at the difference as well.  Both units were sounding so very different from each other and there shouldn't be THAT much of a difference (according to Ray).  Well, I almost was sold on the A10 and then.....

I took out Rays input tubes, the Telefunken 12AX7 Smooth Plates and put them into my B52 input section.  THE SOUND WAS EXACTLY THE SAME AS THE A10!!!  I was so happy at that point, I really can't explain it.  I was VERY relieved as I didn't want to go through the hassle of selling the amp and it's custom isolation stand and the whole 9 yards.  The difference in sound was JUST the input tubes and NOTHING ELSE AT ALL.  Sorry, but when I think of that day, I still get so happy about it.  I was on the verge of a major change because my ears were telling me what was happening.  It isn't the equipment that I am married to, but when something sounds that much better, it just DOES and there is no way around that.

Damn input tubes...come to think of it, I still need to track down a pair of Telefunken 12AX7 smooth plates with the red tips.

....tube rolling can make a very big difference.  Couldn't believe my ears that there could be so much difference in sound between a 12AU7 and a 12AX7 from the same family and same tube type!

EDIT:  From what I noticed that day, the input tubes made the differences in the sound null between the A10 and B52 preamp sections.  I was very content at that point and never thought of rolling 6SN7 output tubes on the A10.  However, from my experience with the B52, the output tubes also have a bearing on the sound, just NOT as much as the input tubes.  I did tons of tube rolling on the input and output tube sections of the B52.  I really wanted to nail the preamp sound performance for my speaker rig.
"We don't like their sound, and guitar music is on the way out."
- Decca Recording Co. rejecting the Beatles, 1962

Fascinating - the A-10 does use a phase splitter on the unbalanced inputs, whereas the B-52 does not.  I would think that, at a minimum, the A-10 would sound better, or at least different, with unbalanced sources being presented to the balanced outs.

For now, all my headphones are dynamic.  So the B52 stays for that.  If I was exploring or wanting to get into 'stats, I would definitely be considering the A10.  My ultimate decision would be based on the preamp performance, there I don't want to compromise if at all possible.
"We don't like their sound, and guitar music is on the way out."
- Decca Recording Co. rejecting the Beatles, 1962

While this is an old thread, I just put a deposit down on an A-10 Thunderbolt II from Ray. Hopefully this will be my last headphone amplifier / preamplifier ! Last year he made some internal changes to increase it's performance with Stax SR-009. I had a chance to hear then and have not been able to get it out of my thoughts. 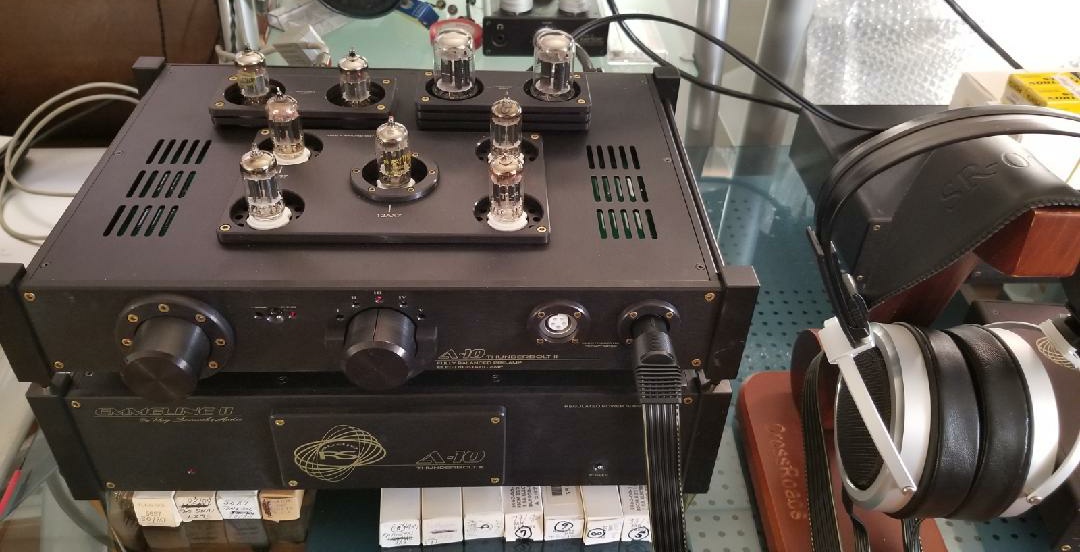 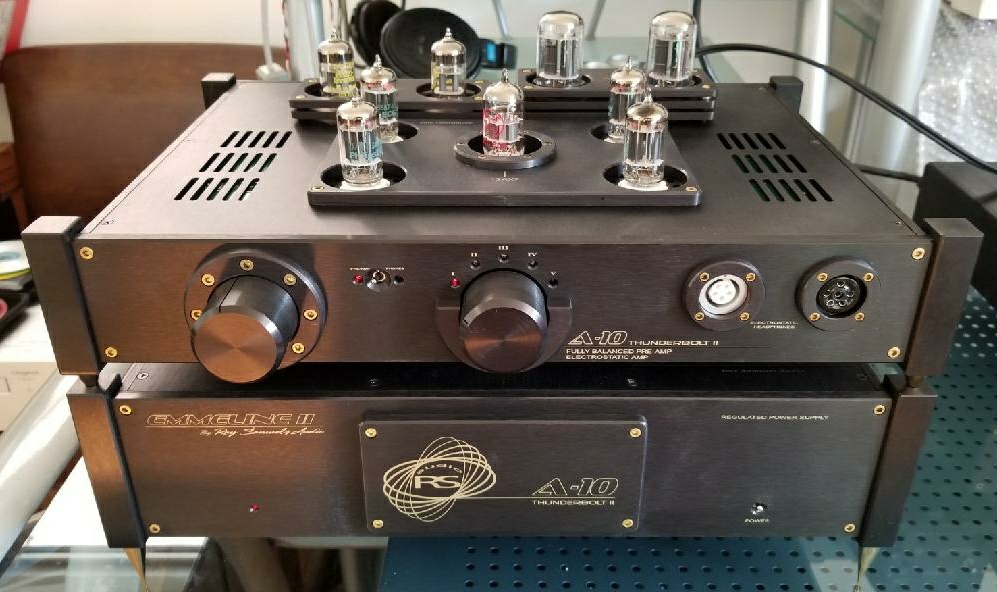 Picked up my A-10 this week at Ray Samuel's Audio. 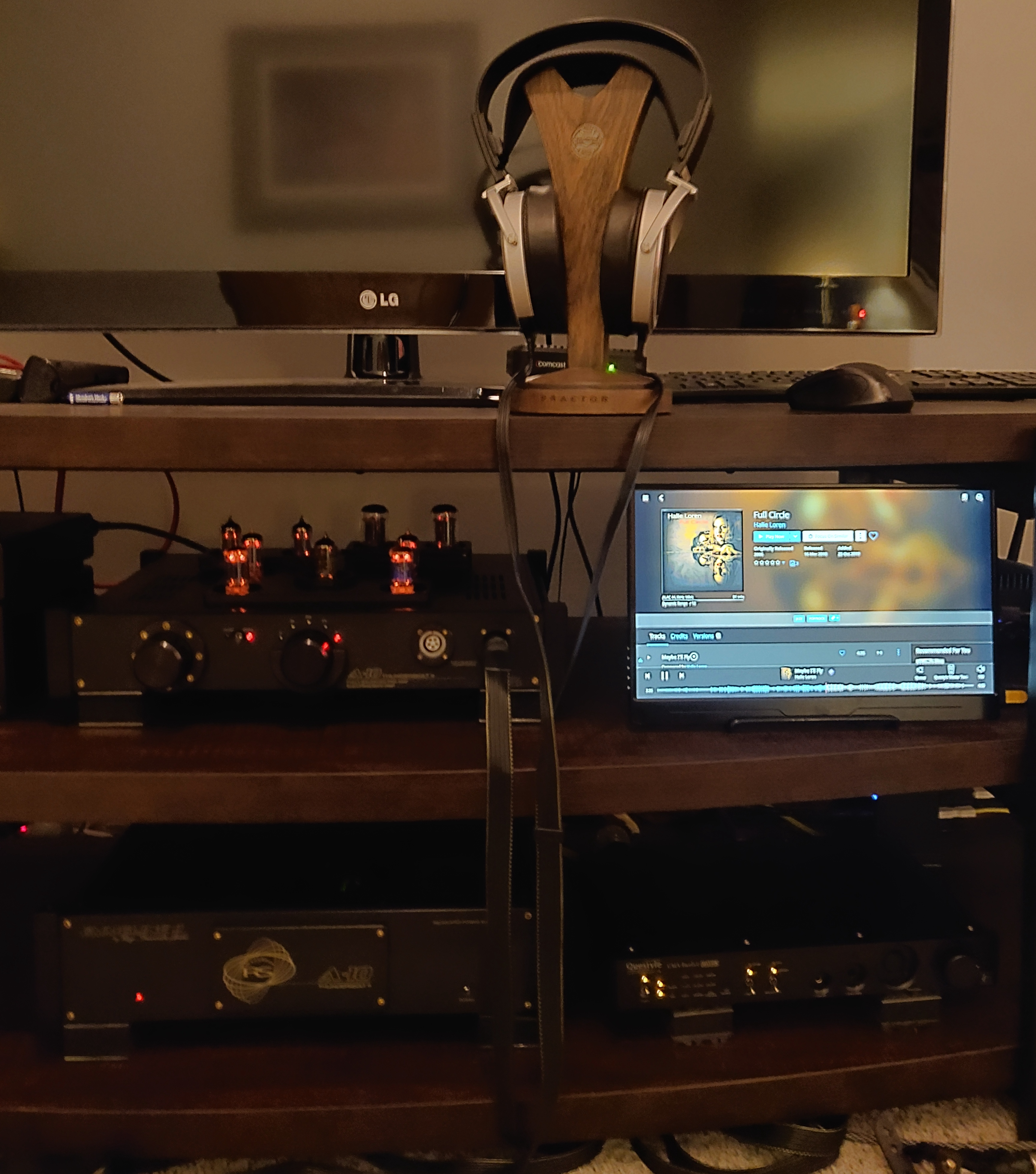 I must say I find it a lot more natural and real than my Utopias with the Apache. I also had a chance while at Ray's to compare it to his B-52 with the Sony R10 and my Utopias on the the B52. This really is the end of the line for me.
Last edited: Dec 25, 2020
You must log in or register to reply here.