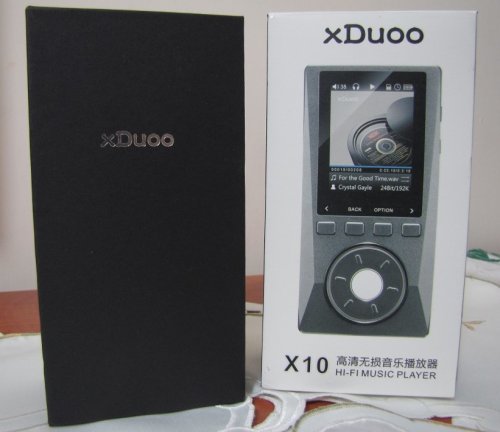 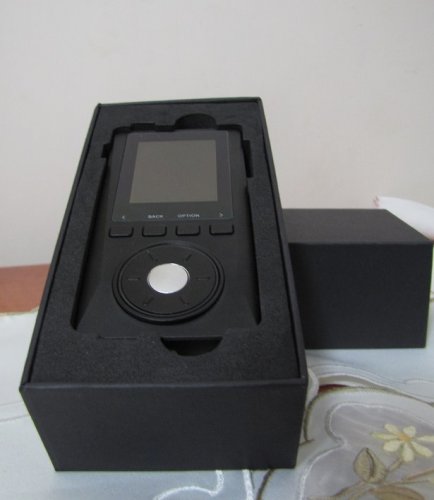 The X10 arrives in the same package as the previous X3, outer paper box and cardboard box inside, simple and hassle free. Below the X10 unit there’s a smaller box that stores the included accessories that consist in a USB to micro-USB cable, 3.5mm to 3.5mm cable, optical cable, and 2 extra screen films (there is a 3rd film already installed on the player). An extra case would be favorable. 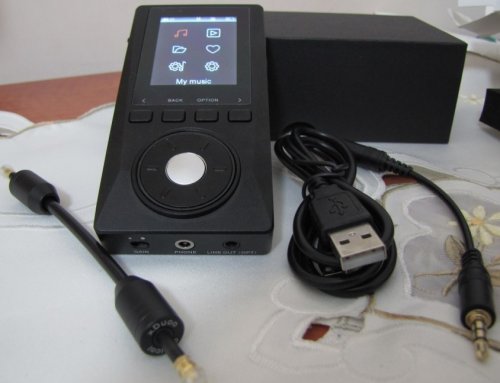 Build quality and finish is quite excellent on the X10. The unit has an all black finish, a bit plain looking but rather discreet. Made mostly of thick metal material alloy (aluminum), with a very smooth finish without any sharp edge and well assembled. Coming from both the previous X2 and X3 models, the X10 features a good improvement with the colorful 2” screen and much friendly user interface, and finally a coherent controls layout. 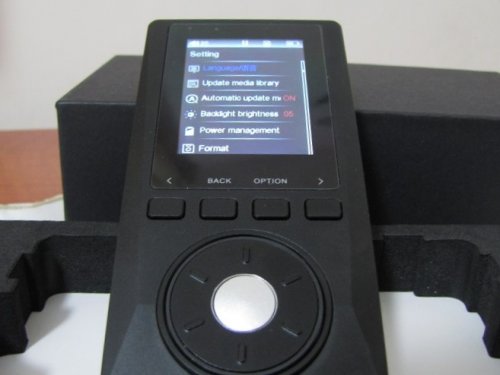 ​
At the upper side, there are the power button, which also works for screen on and off, and the micro-USB port. A small click noise can be heard when powered on and then the players takes a few seconds to completely start up. On screen off it is still possible to operate the device without having the screen turning on; main playback and volume controls are able. 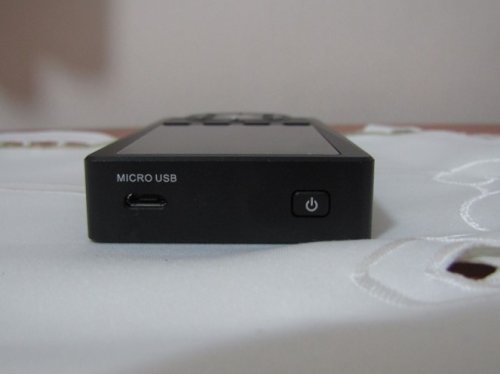 ​
On the right side, there are the small ‘reset’ button, the up and down volume controls, and the micro SD slots. Like the X3, the X10 has not internal storage but also features 2 card slots which is a great advantage for a DAP at this price point. To the left, there’s just the lock switch. The whole device is completely locked when the switch is on, and just the screen can be turn on with the power button and in fact the only button that will turn the screen on; a lock icon is shown on the upper part of the screen. 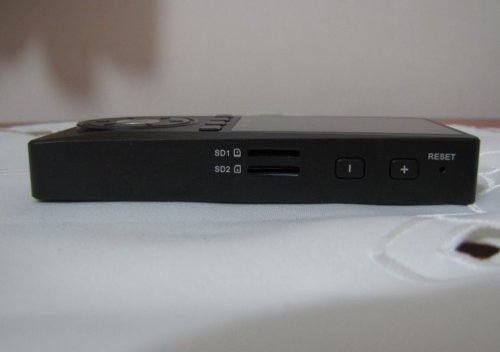 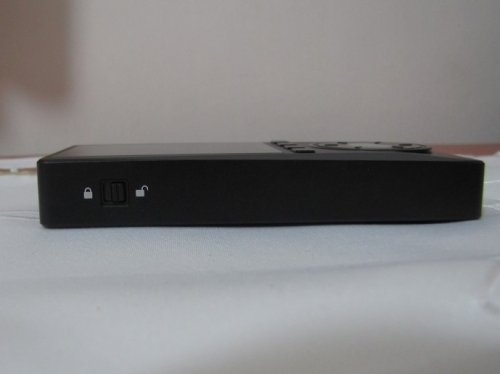 ​
On the lower part are the Gain switch and the 2 output options, ‘Phone’ and ‘Line out’. The phone is obviously for headphones 3.5mm plugs, while the line out for amplification use. As labeled, the line out also has the optical output connection and the X10 package already includes the needed cable for this (I couldn’t try the optical output yet). 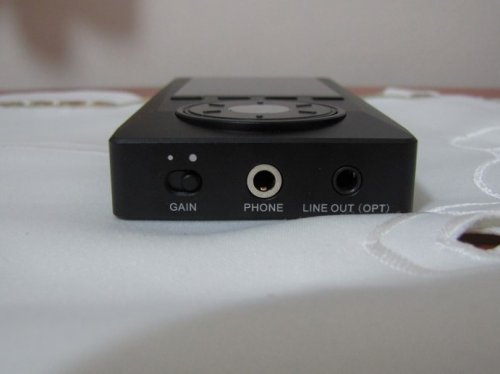 ​
On the front panel are the color screen and all the navigation and playback controls. The screen quality is good with decent color depth and sharpness; nothing exceptional, but cool enough and much nicer than the old-fashioned 2-color OLED displays. In the middle there’re 4 buttons, ‘left’, ‘back’, ‘option’ and ‘right’. Left and right are used for both up/down navigation through the different menus and also as back/previous and forward/next during playback. The back button is used to return to previous screen or back to the main home screen. And on the lower half panel there’s the scrolling wheel and play/pause/enter circle button. The wheel is a bit stiff and the response is a bit slow but it doesn’t rotates freely. It is used for faster navigation on menus, though the left/right can be used for the same matter. 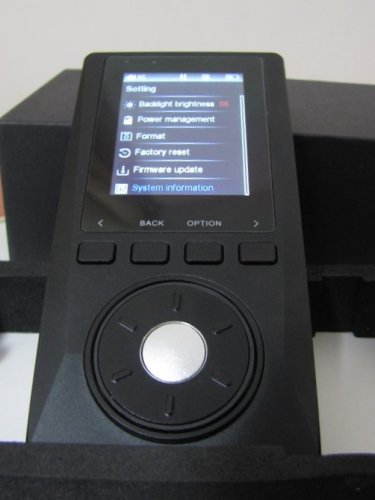 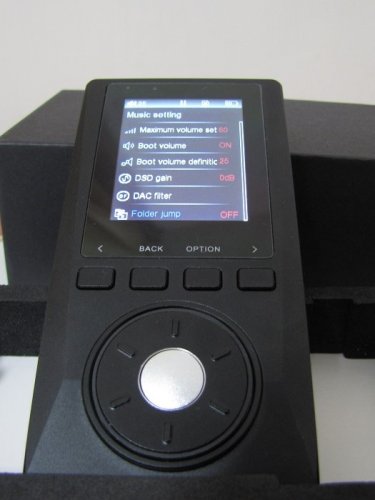 ​
Following the X3, the firmware is very stable. The navigation is very intuitive and the different menus and options are mostly self-explanatory. The player can be set to automatically update the file database whenever a micro SD card is inserted; though the scanning is a bit slow.

On the home screen there are 6 options:
Overall, the X10 has the necessary functions for the portable daily use. If anything, the equalization options are still missing like with the X3 and X2, and compared to some similar priced players, there is no wireless Bluetooth support nor DAC or even the fancy OTG function. I never find these extra features really necessary and always prefer a more stable system, though it’d still be cool to have some extra functions.

It is worth mentioning that on the current 1.11 firmware version, the gapless playback it is not fully supported. Moreover, there is a second to wait until the start of the next track, and sometimes a second or half missing at the beginning of the song; probably the most annoying glitch of the X10.

In terms of portability the X10 is less compact than the X3 but still pocket friendly, not weighting too much.

Battery rates around the 9hrs, and in practice it’s quite accurate, of course it may be lower depending on the volume, headphones, and file format. Keeping the screen off certainly helps in this regard, and the screen won’t turn while using the playback or volume controls.

Hiss wasn’t really noticed with most gears, and maybe just a little with most sensitive CIEM sets. However, there is some noise when plugging/unplugging or when turning the device on or off.

The X10 is powerful enough to drive most of the portable gears, from IEMs, earbuds and over-ear sets tried. Even with 150ohm earphones like the VE Asura and similar, the volume barely reached the 60/100 steps without showing signs of distortion, unnatural tone or lack of dynamics. SoundMagic E80s and Sennheiser HD25-ii worked very well too with their 64ohm. For a more demanding pair like the Zen 2.0 the volume was still kept below the 70/100 mark, though the earbuds didn’t reach their fuller performance.

While the X10 has the Gain option, there’re practically no differences in volume matching (unlike the X3 that showed a bit lower volume on the low gain). It seems more like a damping feature than an amplification gain. On low gain the sound is a tad smoother, flatter and more laid back, while on high gain it adds a bit of energy to the lows and highs for a more lively effect. Apart from that the gain option is meaningless.

Considering the previous X3 model with the very neutral-to-bright presentation, the X10 is much more flavored. In some ways it can be seen as an ‘upgrade’, but overall they’re two different sounding devices. The X10 has a well balanced and fairly full sound signature, with some added warmth to the whole presentation but not having a serious coloration or specific gain on a certain frequency region. It has a good sense of musicality keeping a nice level of detail and separation.

The lower notes have a slight gain trough the mid-bass area, smooth and a bit warm that gives a bit more weight to the lower instruments, yet safe from sounding dark. Speed and layering are decent, though some limitation can be perceived in terms of depth or extension. Both GR07 and 3RM already gain some extra kick which the X10, and the DN-2002 or Primacy can sound heavier.

The midrange is probably the strongest part of the player. While not particularly forward it fails to sound recessed even with more v-shaped sets. It shows some warmer tonality from the lows and it is also thicker in texture. However, the whole sound is fairly clean with a nice sense of musicality. The upper mids are smooth, with good texture for female voices, cutting some sibilance, and also with a clean transition to the lower treble region.

Similarly to the lows, there is some limited extension at the upper treble, that while it works well with too bright earphones, it can also miss the micro details. Image is about average and the X10 won’t create a really 3D scenario. Soundstage is rather limited, still a bit larger with more depth than the X3 had, but not as wide as the PAW Pico and way far from the immersive and open sounding Aune M1s even on its single output option.

On a closer A/B comparison to the xDuoo X3, the previous model gives the impression of being more transparent and cleaner sounding. However, in practice the overall detail is not higher on the X3; it’s more about the fuller sound on the X10 that gives a more-laid signature. The X3 is also more aggressive on the treble region and a less favorable match for brighter earphones or over-ear cans, whereas the X10 is less fatiguing and enjoyable with a more rounded sound from lows to highs. It is also a much more all-rounder player that can match more music genres without missing in any specific area.

The X10 works very well as a source for any portable amplifier and the separated Lineout input is very comfortable. The player automatically sets at maximum 100 volume level and the adjustment is strictly done by the amplifier in use. Despite its own signature and slight coloration as a DAP, when attaching an amplifier it turns to be a very transparent device not mixing with the extra amp used.

All in all, the xDuoo X10 is a very well built and easy to use portable player. The firmware and response has proven to be very solid. It may not be a real upgrade over the X3 nor won’t it beat more expensive portable players in pure sound quality. However, the sound is more friendly in its presentation. Yes, it is missing many features that can be found nowadays on many new DAPs but for those who do not need them the X10 is a good option as portable player at the current price.
Reactions: Vasarely, hieple193, cowboy14 and 3 others