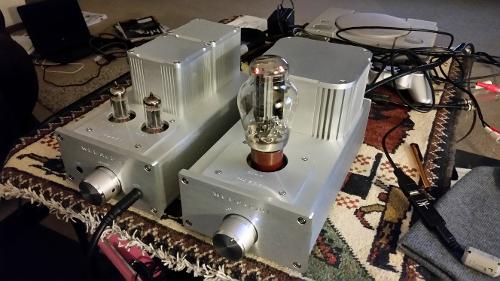 I got the 10% percent discount and free shipping November promotion. The Woo Audio WA6-SE needs no introduction, Woo Audio has the products and the path to the summit of head-fi on lock. This amp looks great and it kicks butt, like a Shaolin master from Wudang mountain. I'm throwing my Schiit in the garbage can, just kidding, I'm keeping my Vallhala 2. Too early to critically compare the two amps, the WA6-SE needs more time to bloom. I am very familiar with the sound of the Schiit Valhalla 2 with stock tubes. Straight out of the box and head to head with a well used Valhalla 2, the WA6-SE is a significant step up in overall sound quality. The rectifier in the picture above is not the stock rectifier that came with the amp. The reviews on the stock rectifier the Electron Tube 274B are mostly bad so I got a better rectifier with mostly positive reviews. The Valve Art 274B, it looks almost identical to the stock rectifier. A closer look reveals larger black plates and glass enclosure, the Valve Art 274B has more mass than the stock rectifier. It was a cheaper upgrade for now, I'm going to wait awhile before I roll tubes and upgrade the power cord. I know from experience that "burn-in" time is required with amps. On the Woo Audio web site there's a "Woo Audio Amplifier Comparison Chart" under FAQ. According to team Woo, the WA6-SE is rated four out of five stars in six sound quality categories. The highest score is 30 stars, the WA6-SE is 24.5 stars total. Dynamic response is the WA6-SE's strong point, 4.5 stars out of 5 stars, judged by Woo. Absolutely a step in performance over the Schiit Valhalla 2. The dynamic response of the Valhalla 2 is not even close to the dynamic response of WA6-SE. I still have love for Schiit, I'm going to keep the Valhalla 2. I love the euphonic mid's of the Valhalla 2. The initial sound of the WA6-SE confirms to my ears what other reviews say about the sound characteristics of the WA6-SE, the sound is on the solid state-ish side of tube, the other side being the warmer maple colored side of tube. 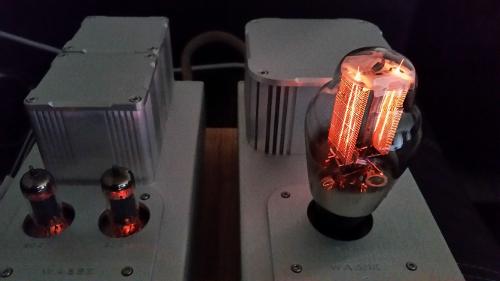 Stereocilia
I don't think of myself as a Head-Fi enthusiast anymore. I have become kind of a head audio snob. Most of the head gear that I have reviewed so far has now become irksome with long term use. My DECWARE Zen Head amp now has touchy jacks in and out and the plastic slide off battery cover is fail. The volume pot on Zen Head and my RS Black Bird SR-71A crackle. The longer session listening comfort of my Grado GS1000e headphones bothers my ears and that 10Khz boost is not for me anymore. All of my sources are noisy, my Apple iPad 2 has the least amount of background noise via the 30-pin line out to rca cable. Streaming Tidal tracks using the iPad 2 is good enough for now but the response time gets hung up. I have the new Microsoft Surface Pro 4 table with the m3 core due to the fact that it is fanless, makes no noise at all. The Surface Pro 4 has one USB port and that port is noisy but the fanless design lowers the ambient noise level. I like that a lot because I often multi task while listening. My best gear setup to date, that sounds best to my ears and comfortable for lengthy listening is the Apple iPad 2 streaming Tidal tracks to the WA-6SE via line out dock and my HiFiMan HE-400 headphones, the HE-400 took some time to wear in for comfort, I changed out the stock ear pads and stock cable. I'm in the market for a better DAC and some USB power conditioning gear to go with my Surface Pro 4. First I need sell off all the irksome gear to help fund my head journey. Yeah I got it tough

Stereocilia
Rolling the tubes to the Gold Lion GZ34 / U77 for rectification and a matching pair of 6DR7's was a reasonably priced roll that sounds nimble to my ears. I got the GZ34 from https://www.cryoset.com/ The 6DR7's are from Woo Audio stocks. I'm using HiFiMAN HE 400 planars, my source is the Dragonfly 1.2 mated to the incredible USB REGEN by UpTone Audio, http://uptoneaudio.com/products/usb-regen That UpTone USB REGEN takes the Dragonfly 1.2 up the summit, can't wait for new Dragonfly RED to show up in my mailbox, back ordered 14 days, My next upgrade is going to be new cables and maybe another rectifier in the upscale price range

Smileyko
I am buying the REGEN right NOW!!!
Pros: Can drive anything I threw at it with ease, it's looks, ease of use, tube rolling options
Cons: Heavy, 2 separate units rather than the typical 1.
First off, this is my first review of an audio product. I have talked with Mike from Woo Audio (Hifiguy 528 on Head-fi and Hifi Insider on YouTube) on numerous occasions and he offered me the opportunity to review the Woo Audio WA6SE. Of course, I jumped right on that.

Gear used with the WA6SE:

Appearance
Because this is the first thing you encounter when getting the amp. I saw pictures of the WA6SE online before receiving these and always thought the unit with the tubes on it was the amp and the unit next to it was just a DAC, I was wrong. The WA6SE is a 2 unit amplifier, they have the power supply separate from the amplifier components completely. The unit I received is the black version, it comes in a silver version as well. I really like the minimalistic approach they took on the fronts of the units, it has “Woo Audio” engraved into the front of both units, the on/off switch on the power supply, and two ¼” outputs on the amplifier unit, one for low impedance and one for high impedance. The matching knobs and form factor between both pieces eases my OCD for everything matching in my chain. If I didn’t know better I would have guess this amp would cost $1500 easily just based on it’s looks, but Woo sells it for $1190. The massive rectifier tube on the power supply is really something to look at. Once you turn the amp on with the dial on the power supply, the blue LED power indicator starts blinking for probably 10 seconds until the tubes heat up, the tubes begin to glow, and you, you get excited.

Build quality/packaging
I got the large package with “Woo Audio” stamped on the side in big letters from the FedEx office. I couldn’t tell if the box was full of bricks or if the amp REALLY weighed this much, it turns out, it’s the latter, it weighs a ton.  The box has many pieces of Styrofoam to hold the units in place during shipping, the tubes are all individually separated so there is no damaged done during transport, they really care about getting this to you safely. The amp units are SOLID. They feel like they are a solid piece of steel, unbreakable.

Sound
Sound, this is the part you're paying for after all, the rest of the package are just perks. Well, I can tell you that the WA6SE does not diasappoint. At the time of receiving the unit I was used to the sound of my Bottlehead Crack w/Speedball upgrade, my Gustard H10 was acquired while I had the WA6SE on loan, and I used an Asgard 2 very briefly as well, so my view of the WA6SE is going to be based off of what I had heard from these other amps.

First impressions are that the soundstage is opened up just a tad wider on all my headphones than they were on the Crack or any solid-state amps I use, the bass decay is quicker so it made that effect. The overall clarity of music just seemed to improve, the change was like driving around in the fumes of the city and then finally hitting an open country road, refreshing. If you are expecting to improve the bass response, or bring out the mids of your headphones, or extend your highs, etc., experiment with the available upgrade tube options. In stock form, It is quite clear that Woo had one objective, not to let any equipment get in the way of hearing the music properly; the amp does just what any amp is meant to do, amplify the source. It does not add any flavor to the sound, it gets the signal to your ear as cleanly as you could ever imagine without adding any "warmth" or "coldness" to the sound, the way it leaves the DAC is the way it gets to your ear.
What can it power? Well, I did not use it with anything that demands loads and loads of power like the HE-6, but the T50RPs I used with it were driven very well, which is surprising for a tube amp in this price range. They are the equivalent to about 600 ohms, which in a planar is very high because planar magnetic drivers are hungry for power, if they are under-amped the lows will become extremely distorted. The Bottlehead Crack could not power the T50RPs well at all, and the WA6SE did it with ease. The WA6SE can even power the TH600 well on the "Low" impedance setting without any hiss noise or interference at all. Dynamics really shine with the WA6SE, the bass decay is so quick and everything was nice and tight, no bloat anywhere.

I could call this a reference amp. If you really want to tell if other amps are adding any 'flavor' to your music, pick a pair of headphones and A-B with the WA6SE, changes will stick out like a sore thumb. Listening to the TH600 on the WA6SE and then the Gustard H10 made it clear that the low end of the Gustard is slightly emphasized, and the soundstage is a little smaller. The decay of the bass is about the same between those two, but the clarity of the WA6SE is slightly better. The Bottlehead Crack would be a better comparison. They are both tube amps, they are both big, they are both great with dynamic headphones, and both create a very nice clear sound. Why would you buy the WA6SE over the Crack? Well, firstly you don't have to assemble the WA6SE, the Crack comes in a kit. Secondly, the crack may need to be replaced later on if you ever decide to buy headphones that demand more power, it is not end-game material unless you plan to stick with a Sennheiser HD600 forever. Buy the WA6SE and you will never need another amp.  It will handle everything you throw at it, and not even break a sweat.
Reactions: Hawaiibadboy
Pros: Superb in all respects
Cons: None
With the upgrades, especially the Blackgate caps (now a collectors item), and the Sophia Princess rectifier, and Tung Sol 6FD7 or Raytheon 6EW7 tubes, the WA6 SEm is one of the best SE amps there is with all types of dynamic phones.  Get one - you'll love it.
Read more…