The PRO 550 (formerly the PROline 550) builds on the immensely popular HFI-580 (formerly the HFI-550) to create a professional headphone that is both durable and versatile. Tight and powerful bass plus precise and detailed instrument placement is given. Featuring the same 50mm Mylar driver able to crank out lots of volume and punch, the PRO 550 also includes detachable cables and ear pads. Updated for 2008, the PRO 550 now features thicker ear pads and headband pad, brushed aluminum nameplate on the ear cups and a nylon hard case to protect your headphones on the go.
Share:
Facebook Twitter Reddit Pinterest Tumblr WhatsApp Email Share Link

Pros: Comfortable, decent isolation, little leakage, strong and deep bass, balanced sound signature, decent build quality
Cons: Short(ish) 1/8 in. cord, no smaller carrying case, folding is entirely unexplained
I'll preface this by saying that I don't exactly consider myself an audiophile. Not yet, at least; this is my first really nice pair of cans, and I haven't really dabbled in other high end audio whatsoever. This just means that I don't use incredibly complex tech jargon or compare to other models the way many other reviewers do. Just something to keep in mind...

ANYWAY, on to the review!

The packaging is nice. A gigantic box with a picture of the headphones, which holds the magnificent carrying case. This case is built like a bomb shelter, it's incredible. I would've appreciated an additional smaller case, maybe just something to cover them during brief storage, but it is what it is.

The headphones are rather large. On my fairly big head the cover my entire ear and part of my hair and lower cheek. Still, they're quite comfortable: I can wear them for nearly 2 hours and only adjust them slightly, and even after that I just have to adjust them a bit more before they're comfortable again. Fit is great, grips my head well and is extremely adjustable. Strangely enough, the taughtness of the joints attaching the cups to the band decreased rather quickly. Initially they would almost click into set positions when rotating, now after two weeks of gentle use they turn smoothly. That's not a big deal.
Still on the topic of folding and bending, them, though, I've been completely unable to fold them into a ball as they are shown online/on the box. They just do not bend like that. I tried, but worried I would break them so I stopped.

In terms of their look, they're very sleek and a little understated, which is nice. Non-shiny plastic with the nice shiny logos on the side, grey and black, with PRO 550 written on the pad on top. As big as these are, I don't find it problematic. I use them on the bus to school almost every day and they're not cumbersome and, fortunately, I don't even really get any strange looks. They certainly don't have the (in my opinion) gaudy look of Beats. I use them to block out Steve Harvey, which my bus driver blares through the entire ride, and they do a great job of blocking out loud external noise even when music is only playing quietly. You certainly could not have a conversation while wearing these. In terms of leakage there's a little, but when they're sealed over my ears I don't find it to be a real issue.

I was asked for pictures, so here are a bunch of pictures. Apologies for the low-ish resolution, let me know if there are any other pictures you'd want to see.

The headphones with the short cord attached: 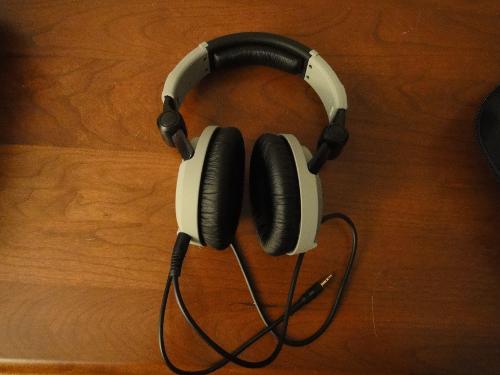 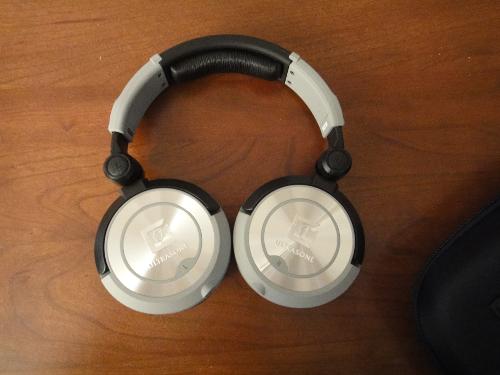 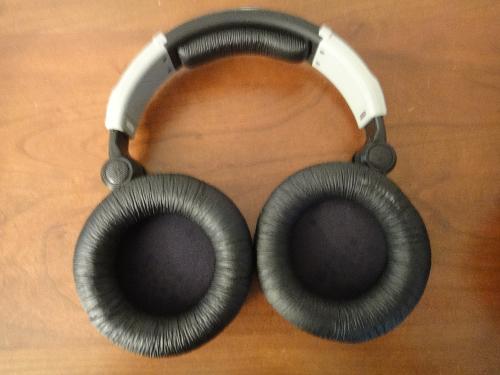 Interior of the case: 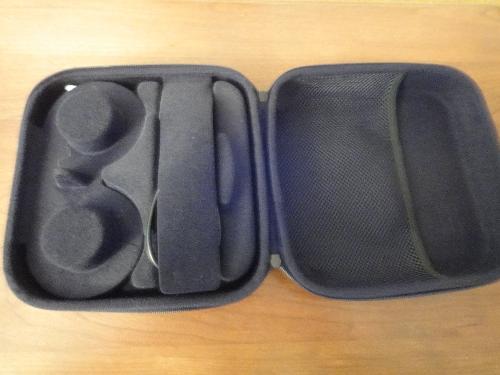 Outside of the case: 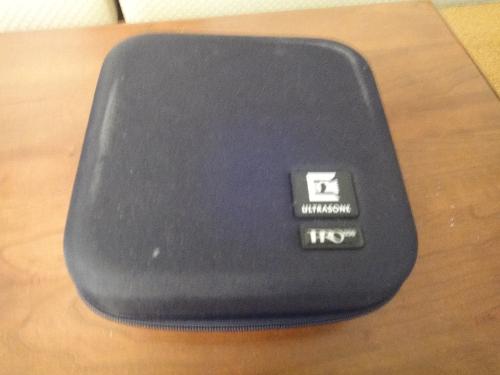 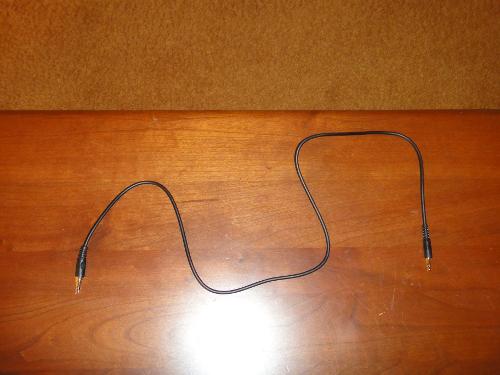 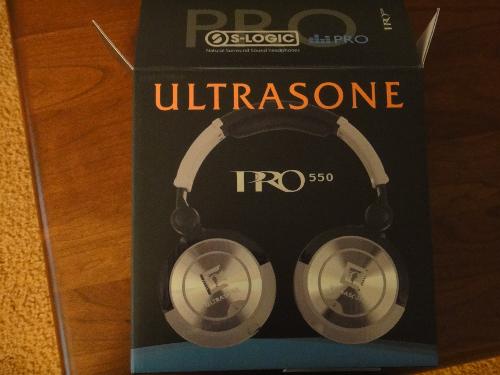 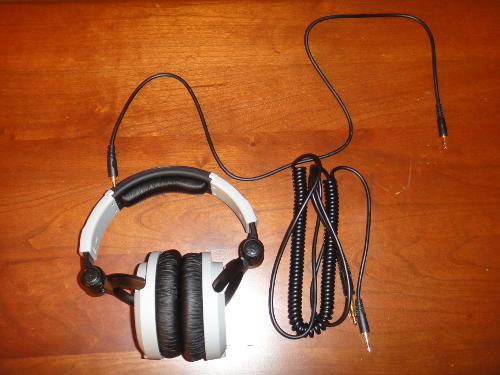 Size of headphones compared to my hand: 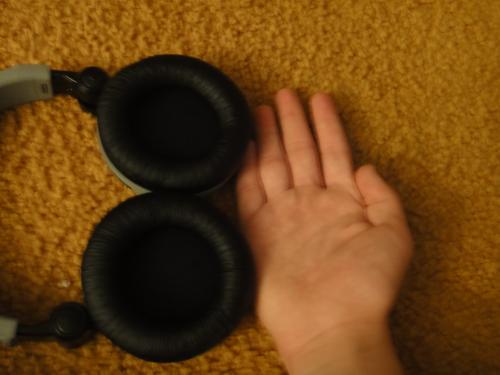 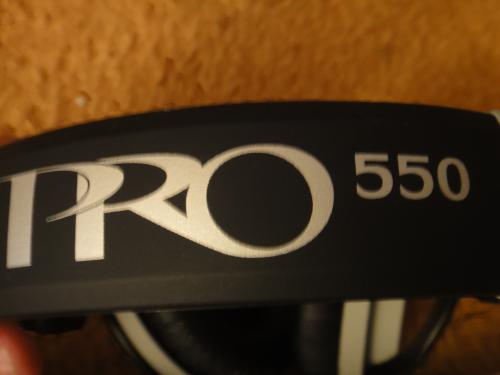 And a final additional shot of the headphones: 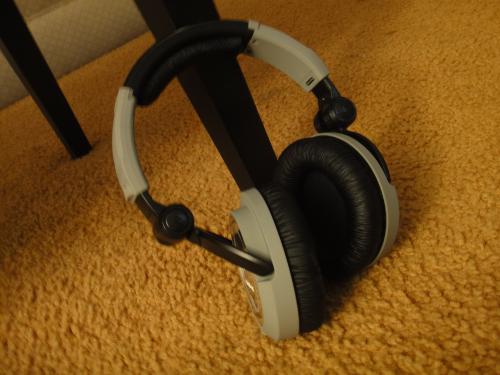 On to what you probably care about more than aesthetics... the sound. Right out of the box they already sounded amazing, incredible low end and hard hitting percussion with clear mids and highs. I've burned them in for about 50 hours, mostly while not listening, and sound has improved noticeably. Percussion actually has a bit more punch, highs and mids are a little more pronounced. I don't exactly notice the S-Logic technology. I mean, they have an INCREDIBLE sound stage (very open) but not with major instrument separation or strange around-head effects. Nonetheless, as I said they have a fantastic sound stage. Songs with a naturally big sound (Semi-Charmed Life and Tubthumping are my favorite examples) just shine. I listened to the beginning of a live recording off Pearl Jam's new live collection and felt like the crowd was in the room with me. Unfortunately the lower quality music on the album was noticeably low quality with these headphones, but I guess that's to be expected.

Here are some impressions with a few different songs, just to give a clearer picture:

-Personal Jesus by Depeche Mode: Drums and guitar line are tight and punchy. Very big, wide sound. Strong synthesizer moments are huge and the attack is good. Vocals and reverb are clear.

-Time of the Season by The Zombies: Ongoing bass and percussion are clear and strong, despite being an older recording they still have a bit of a surround sound feel. Vocals are warm and clear, maybe a little recessed but still sound great. Bigger vocal harmonies are incredible, soundstage makes them shine.

-Country Song by Seether: Excellent attack going into the song, galloping-esque percussion is clear and twangy guitar is not muddied by the bass. Vocals become a little harsh during the chorus, but that may be more of an audio issue than an issue with the cans.

-Finding Something to Do by Hellogoodbye: As with everything else, the biggest and bassiest moments of the song are incredible. High vocals still shine, occasionally are a bit covered by instruments but not often.

-The Monitor by Titus Andronicus (full album): This album has an odd vocal recording style, in that most of the vocals sound far away and a bit hushed in general. With that in mind, the album still sounds incredible with the PRO 550's. Giant background chanting on the second track is clear, but lead vocals still do not sound any more hushed than normal. Some issues with particularly distorted guitar, where the headphones sound kind of harsh, but only at the loudest moments.

-Ca Plane Pour Moi by Plastic Bertrand: Brass and saxophone on this track are clear, I can hear every breath. Surround sound on the vocals is amazing. The song is very bright, though the sound signature of the cans themselves is a bit on the warmer side so the song is toned down and easier to listen to than on my Creative EP 830 IEMs where it almost hurts my head.

Long story short, they look nice and sound amazing. Compared to the Monster Turbines IEMs I returned before purchasing these... I mean, there's just no contest.  I know that comparing cans to IEMs is essentially like comparing apples to oranges, but it's my only real frame of reference here. The PRO 550 performs above and beyond anything else I've ever listened to.

Now for a couple negatives. The mini cord that I use whenever I listen is kind of short. It's very sturdy and thick, but my source can't be terribly far away (my pocket is about as far as it'll stretch). The other cord, the 1/4 inch one, is much longer but I have nothing that it would plug into. I tried connecting my source to my guitar amplifier and then plugging the headphones into the amps phones jack, but the number of cords and the low quality amp and some jumbled equalizer settings on the amp made this an exercise in futility. In the end, I would just appreciate a longer mini cord or an included 1/4 to 1/8 inch adapter (or just make the longer cord 1/8 inch and throw in a 1/4 adapter, like with many other Ultrasones).

A note on why I chose these over the DJ1 Pro, which is basically the same pair of headphones with a different look. It came down to the appearance, I thought the DJ1 on the side of the DJ1 Pros looked kind of tacky and made them appear more along the lines of giant 25 dollar pieces of junk.

So to conclude: I love these. My only real gripe is about the cord, but it's not a huge deal. They look great, they sound fantastic. I would strongly recommend them to anyone else trying to make a foray into the high end audio world. I'm sure I'll get the upgrade fever within another year or so, but even if I do buy another pair I'm certain I would continue to use these as well.

pietcux
As these are the PRO line, the coiled cable s to connect to PRO equipment, and the short with the 3,5 mm plug is for se with a DAP on he go. And then it is long enough. But you can easily buy an extension cable for 3.5 mm cables like his one.

agentcooper
I own these as well. I bought them about 3 years ago. I use them almost everyday for at least 5-8 hours. Since I planned to wear them for much of the (work)day the big selling point for me was they promised "fatigue-free" listening. I have several friends who are pro DJs and they told me the ear fatigue is real. I know it's anecdotal but I never get tired listening to these like I have IEMs or other cans. The sound is excellent, I can hear so much more detail that I could before with my other headphones, and the bass reproduction is great too. The seal around my ears is excellent, it blocks out so much surrounding noise, almost as well as my IEMs. I have no complaints at all about these.
Read more…