The Custom Ultimate Ears 7 Pro is the most robust and powerful Custom In-Ear Monitor available; ideal for live performances. It offers the most headroom of any professional earpiece on the market and is based on a 2-way crossover design with a single high driver and dual low drivers. It delivers growl, punch and clarity.

Intro
In the portfolio of Ultimate Ears there is actually no IEM that fails completely or has to be demolished completely. Everybody has his right to exist and I am sure that at least one IEM can meet your personal taste. As far as my taste is concerned, however, after the RR, 6 Pro and conditionally the 18+ Pro, no one manages to attack the top of my reference.
The UE 7 Pro, for example, is a very good IEM over the whole range, but can no longer completely meet my demands in terms of musicality and audibility. 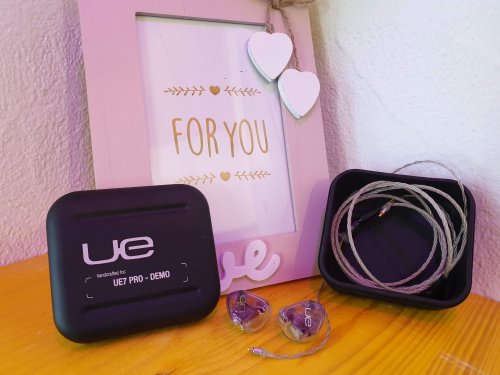 Handling
>> Identical to all tested models of Ultimate Ears <<

The UE 7 Pro is basically a custom IEM, but can also be manufactured as a universal IEM. If you decide on the custom variant, you will receive an individually adapted in-ear based on a personal ear impression, which is also only "compatible" with your own ear canal.
With universal IEMs, there is no way around a silicone or foam attachment (which is of course included in the scope of delivery in this case), but this can influence the sound characteristics and the sound can be falsified both positively and negatively.
The scope of delivery consists of a cleaning tool for the sound tubes, a removable cable, which was especially developed for stage use and the IEM itself. All this is in a screwable, round and black metal case, or square folding case, where the respective name of the owner is engraved.

Ultimate Ears relies on a specially developed IPX connector in their products. This connector is not compatible with MMCX or other connectors. I personally find it better than the one I know so far. It's more compact, sits bombproof and is easier to detach than the MMCX. The tight closure of the two connections (male/female) prevents moisture or dust from entering the connection, which is very important for stage use.
The cable is available with or without ear-loop, clear or black, and with a length of 125 or 160cm. There is also a balanced version (4-pin 2.5mm mini-jack) and a Bluetooth cable incl. remote for telephoning and controlling the Smartphone / Player.

With a custom IEM you don't have to worry about the fit, comfort and isolation. No matter which acrobatic exercises you perform, the IEM will not move from the spot and will also isolate you almost completely from the outside world. If something does pinch, or an adjustment is necessary, you can have it done free of charge by the respective distributor, or directly by Ulitimate Ears.

The cleaning tool is not only practical, but also really necessary, because as with many universal IEMs by now, there is no protection (mostly by a metal grid) in the sound tube, so earwax and dirt can get into the in-ear more easily. For the careful user cleaning is certainly not a foreign word, but it should be mentioned nevertheless.

The design of the UE 7 Pro is individually left to each user. What remains the same is the transparent 3D-printed housing with a view of the inner workings, but with the faceplate you can let off steam to your heart's content and the ear side is individually made to ear impression anyway. 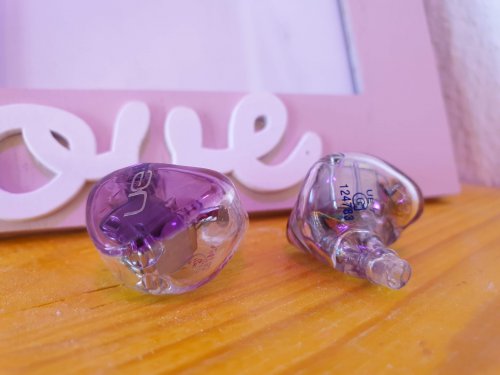 Sound
I have already emphasized that UE pursues a certain goal in tuning every in-ear. According to the manufacturer, the UE 7 Pro is an IEM which is especially suitable for singers and guitarists.Well, basically I can understand that, since the UE 7 Pro covers the upper mid-range and the lower treble most prominently within the UE family, but it is also a bit cheeky and thus causes me the fastest fatigue, but this is nothing to be tolerated and is by far not always represented. Only sometimes a bit annoying.
As time goes by, it also becomes apparent that no IEM of Ultimate Ears is really similar in sound, but there is still a kind of house signature around which everything is built. On the one hand, this is the pleasantly warm basic alignment, natural voice presentation and also the high frequencies are always quite similar. In addition, the pure BA models have a bass that differs in quantity (RR < 11 Pro) and therefore seems to be of different quality. However, the similarities in bass performance, especially in the 5 Pro, 7 Pro, RR and 18+ Pro cannot be denied, which is also confirmed by the frequency response.

The UE 7 Pro relies on a BA bass, which is very clean, has a very good detail reproduction and also provides a satisfying punch and range. As with the 18+ Pro, or RR, it is very linear from the very bottom to the very top, but doesn't have the volume in the subrange. This is also related to the fact that, purely anatomically, we need more level in order to perceive very low frequencies subjectively, although they actually have the same level on the sheet, as perhaps the range around 150 Hz. Therefore, a completely flat signature where all frequency ranges have the same level would also sound completely unrealistic for us, since our hearing is differently sensitive in different ranges.
I generally prefer a more dynamic bass, but UE's BA basses are really good and above all homogeneous.By the way, I can't really tell the difference in low frequencies between the 5 Pro and the 7 Pro, which I put down to the possibly same driver.

The warm basic mood of the UE family is of course also noticeable on the 7 Pro, especially in the mids. I really like this tuning, when the warmth also shows a good transparency and clarity, without it being exhausting in the upper range. The mids should push themselves into the foreground in a very relaxed way and lay the musical details virtually at my feet, with a little emphasis and crisp. Wishful thinking, also with the 7 Pro. The 7 Pro means a bit too well in the upper mids and is the most sibilant representative at UE. Since voices are usually the essential part of music and you pay more attention to them, this is of course more important. It's a little pity, because basically the mids of the UE 7 Pro are excellent, but also with the background that the 7 Pro is mainly aimed at singers, one should have handled it most sensitively. On stage it might not be that dramatic, because you get your own mix and maybe you're not that sensitive with your own voice, but with music it's always present, but bearable and a matter of getting used to it and shouldn't hide the qualities of the mids. There are far worse sibilant monsters.

Somehow a completely legitimate pattern can be seen in UE. They try to use the strengths of one IEM and transfer them to another IEM. With the trebles this applies to the UE 11 Pro. Now I can't say which one came first, the hen or the egg, or the 7 Pro, or the 11 Pro.If one goes by the pure number, probably the 7 Pro, however, UE also continues to develop their products and the sequence of numbers does not seem quite transparent to me.
To cut a long story short: while the bass of the 7 Pro is very similar to that of the 5 Pro, the highs of the 7 Pro have strong similarities in the high frequencies. By the way, this already starts in the mids.
The highs generally keep up with the bass and the mids, but are a little bit too present and in very rare cases also demanding. Beyond 10 kHz they return with a significant increase and have a nice brilliance. Smallest micro details are everywhere, which is of course also favoured by the open, wide and deep stage.You really have something going for you, but I'd like to have a somewhat relaxed presentation with the same amount of detail, which is quite possible. 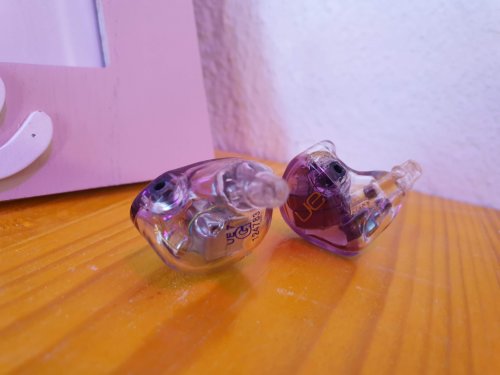 Outro
The 7 Pro is a natural and slightly warm IEM that focuses a little bit on the upper mids and could possibly use a little more body despite the linear and high quality bass. It's not always the most sensitive companion, but you can handle it quite well and accept it better in the long run. For the claim to recommend the 7 Pro mainly to guitarists and singers, one could have perhaps paid a little bit more attention to it, but the idea is also justified, because the voices of the Pro 7 are really very clear and clean. In addition, the 7 Pro is very sensitive and really loud even with very little output.

The complete album of Billie Eilish is really a pleasure with the Pro 7, which is favoured on the one hand by the great production (especially the 3D imaging) but also by the always relaxed voice of Billie.

!!! The pictures do not reflect the original product, but are specially made universal demo listeners of Ulimate Ears !!!

___________________________________________________________
More reviews: https://en.chi-fiear.com/
Facebook: https://www.facebook.com/CHIFIEAR/
Last edited: Sep 7, 2020
Reactions: James Shoegazer
Pros: wide soundstage. superb clarity. sparkly highs. decent bass.
Cons: too airy for ipod/mp3 use. Not a "fun" sound
i was excited over my first custom IEM's ever, I was also excited because i've been a sucker for the Ultimate Ears sound for a long time. Now I know that Logitech is now in charge of UE, but I still felt like these would be very musical CIEM's, as the Ultimate Ears commercial line is so well known for their musicality factor. After a month of waiting due to having to get impressions, and then some delays with my molds, i was able to get my UE 7's in a beautiful package very similar to the one I received with my UE TF 10's, but with a bit more professional flair. Now after placing them in my ear, and getting used to the custom fit (very uncomfortable for awhile due to the ear canal not beingused to having something placed so deep inside), i noticed how these did not sound so great with my ipod touch amped or unamped. Didn't sound all that great with my Sansa fuze amped or unamped, and finally sounded only slightly better with my Sony NWZ amped and EQ'd. Now here's the thing...The soundstage in these things are so damned airy and wide, and the imaging seems so odd, that i just can seem to get used to the sound signature. Now if I was using these on stage, as i have been a singer in many bands, then I'd be incredibly satisfied with the balanced and VERY CLEAR sound from these CIEMs. The downside is since I'm using these for private music listening, they just aren't "musical" or "fun" enough for me. The bass is there and has some depth and weight (very very close to the bass in my TF 10), and the treble is sparkly and very present and active. The way they differ than the TF10 is the mids aremore in line with the rest of the frequencies. MORE BALANCED. The TF 10's have that recessed mids that make guitars and vocals feel like they are coming from the back. These are slightly more forward, but the vocals are more stage sounding aka a bit more hollow and less "full" than in universal IEMs. I think the UE 900 would probably be a more ideal IEM for music listening through an ipod or mp3 player, and these would be absolutely AMAZING for musicians wanting a full bodied, clear and properly soundstaged live experience. For that i recommend these 1000%. For everyday music listening, i'll say pass. I am. I'm selling these for reshelling. UE 900 here I come.
Read more…