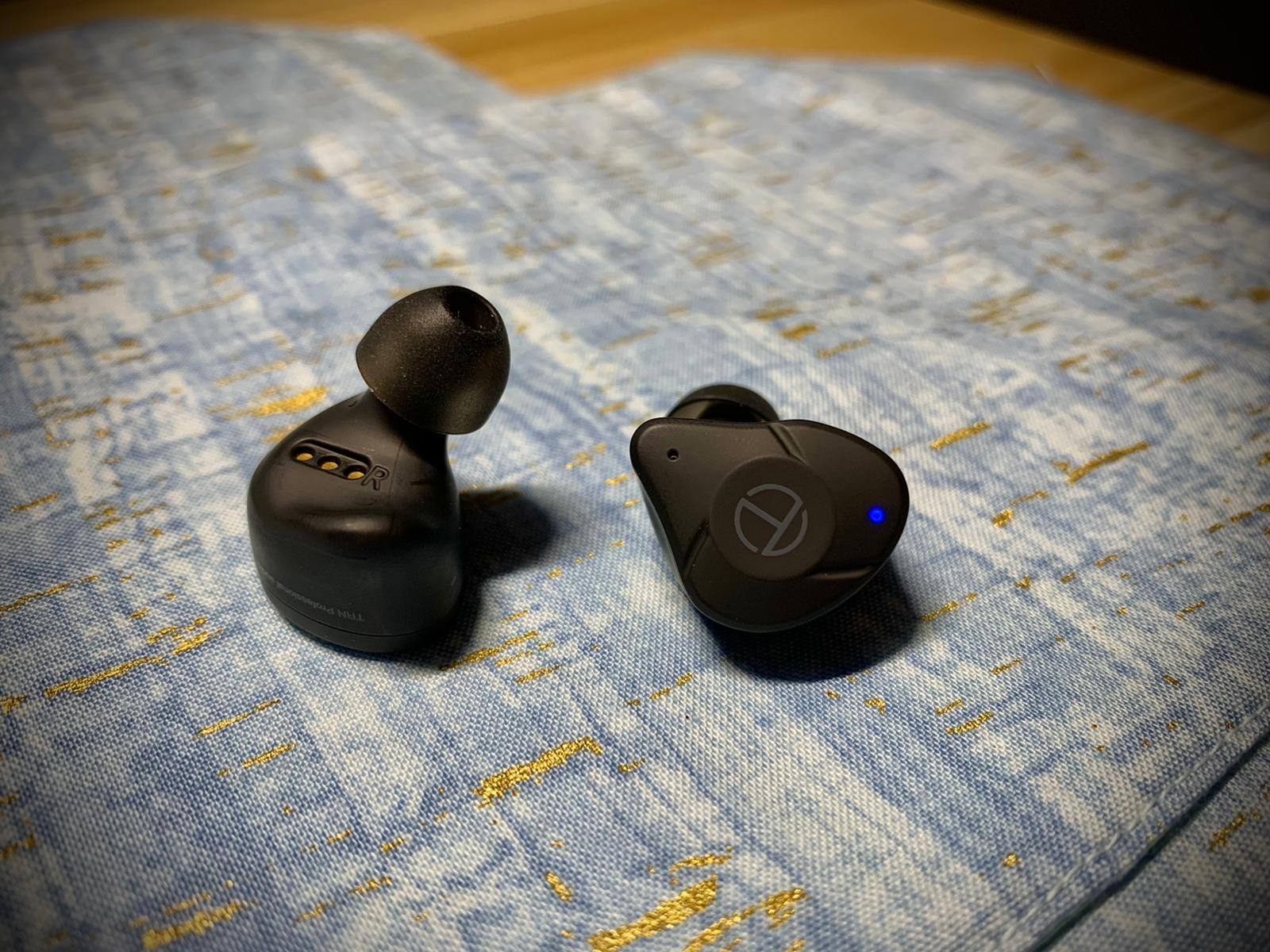 I would like to thank the TRN official store for providing this review unit.

The TRN T300 is quite the complete package for a TWS set, sporting a coherent well tuned U shaped signature, coupled with good BT connectivity/support, a good fit, and some nice aspects like IP45 waterproofing, volume controls, wireless charging and a charging case.

In addition to the TWS IEM, it comes with: 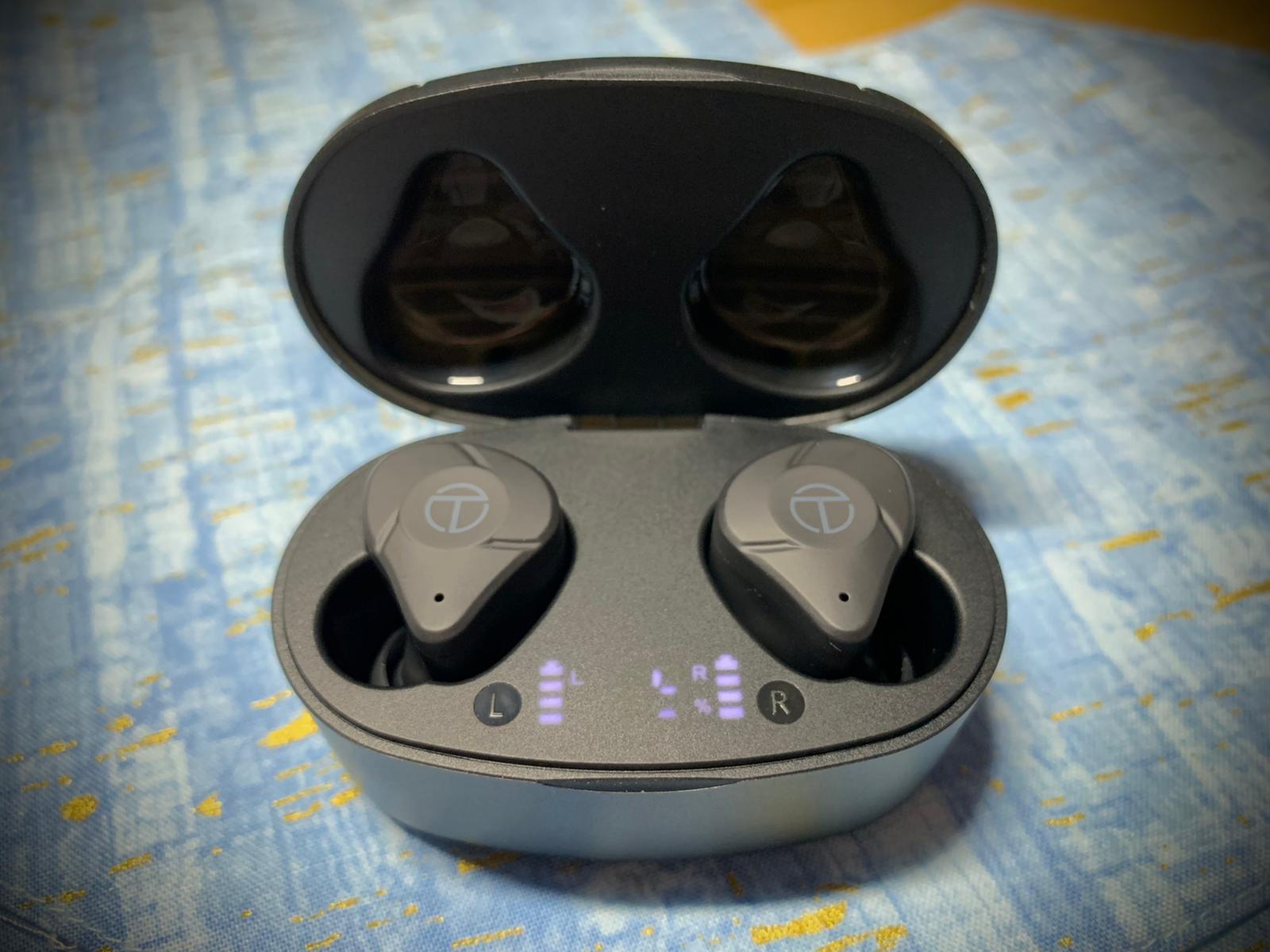 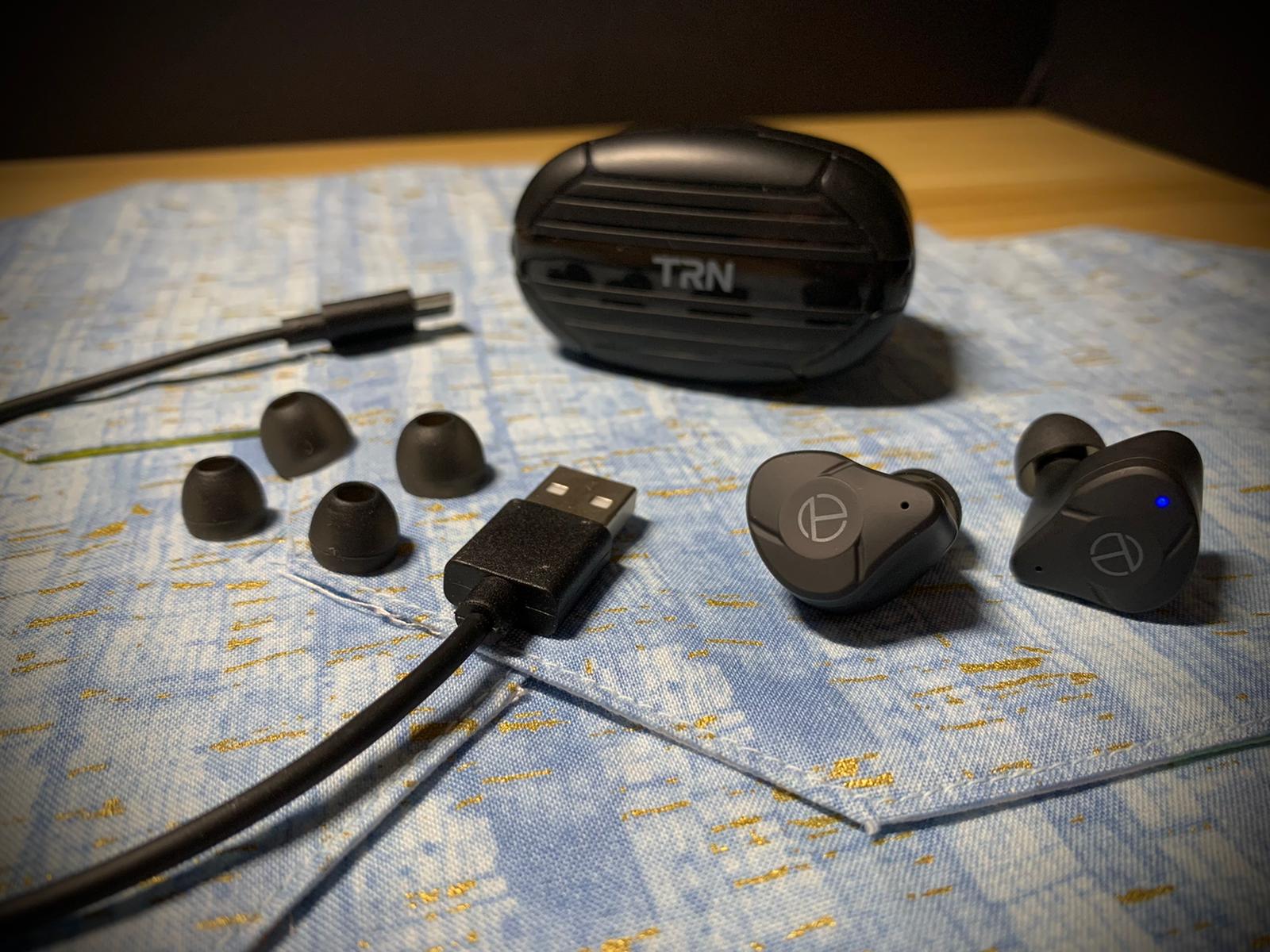 The TRN T300 is on the larger size shell wise, so the set does protrude noticably from the ears. Though, it is very comfortable, light and ergonomic, no issues using it for hours, you can even forget sometimes it’s in use. I didn’t find any driver flex on my set.

The Tronsmart Apollo Bold has a IP45 waterproof rating (i.e. sweat, light rain and splash proof), so it can be used for gym/exercising too, but probably not for heavy rain or water sports.

Isolation is about average for a TWS, there’s no ANC, but the passive isolation should be good for most outdoor use. I’ve tried running around with it, there is a vent and unfortunately wind noise can get inside the TRN T300.

Function for the TRN T300 is as per this picture:

The controls work as advertised above, and the touch controls are well implemented and are not overly sensitive.

BT connectivity on the TRN T300 is very good, it can go about 10 – 15 meters with no obstacles, and maybe 5 – 7 meters with obstacles. I haven’t had any drop outs for the past month I’ve been testing it, though perhaps in very crowded areas there was some slight lag or signal breakup.

The TRN T300 boasts a TrueWireless Mirroring Technology, where both earpieces transfer and receive the bluetooth signal simultaneously, instead of the conventional route, where the primary earpiece gets the signal first before transferring it to the “slave” second earpiece. What TRN says this does, is in theory, both earpieces turn off automatically when there is no connection to the device, so this prolongs battery life in a way. 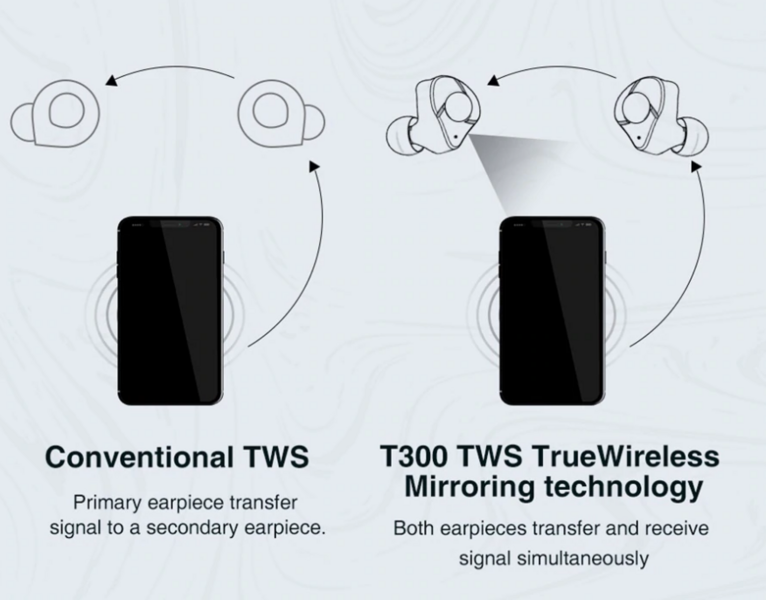 Battery life wise, the TRN T300 is marketed as having the following specs:

I do get 3.5 – 4 hours of battery life with a single charge, so it is thereabouts for the advertised battery life and charging specs, but this would also depend on the volume levels one listens at. Also, battery life would be expected to go down with repeated charging, so in the big scheme of things, I would consider the battery life to be about average.

I didn’t detect much latency with videos and music, unlike some other TWS sets. I don’t usually do gaming, but I think the latency speed is excellent for this set for non gaming purposes. 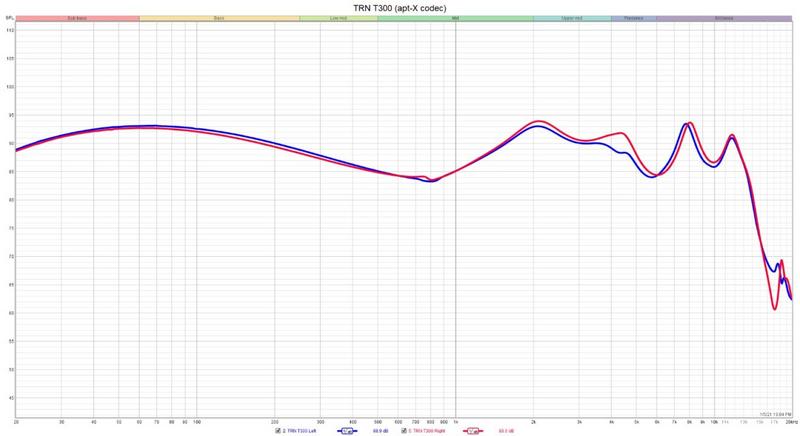 
Soundwise, the TRN T300 is a very coherent U shaped set. It is quite atypically tuned from the usual wired TRNs which have harsh upper frequencies and sibilance in spades. If you have heard the BLON BL-05S (not the non S version), the TRN T300 is actually very similar in tonality to it. So tonally, I would describe the TRN T300 as having a smooth U shaped tuning, that is non fatiguing but still being able to bring forward vocals and instrumentation in the mix. There’s perhaps a higher treble and subbass roll off, but this is also common in some other wireless gear. Dynamics are surprisingly good.

The bass on the TRN T300 is north of netural, and is punchy but this is not a basshead set in terms of quantity. Subbass isn’t the most extended, and bass quality isn’t the most textured, but otherwise, the bass acts as a nice counterpoint to the upper frequencies. Bass has occasional midbass bleed but by and large it doesn’t encroach into the mids. Timbre of bass is quite natural.

The lower mids are a tinge recessed compared to upper mids. Some warmth is added from the midbass bleed, and thereafter, there’s a slight upper mids boost at the 2 kHz area, but this area isn’t shouty at all. The upper mids are very safe and non fatiguing, and I was rather surprised on hearing this, as TRN’s house tuning usually boosts this area to the moon.

Treble is quite well extended on the TRN T300 (other than a 6 kHz dip), with a good amount of details, but without sibilance/harshness. I’m treble sensitive and this treble actually falls on the safer side tuning wise, maybe trebleheads and those wanting a bit more sparkle in their music might find the treble too tame actually, but on the flip side, this is a very non fatiguing and smooth set, and is highly suited for long listening sessions as such.

To be honest, I’ve wasn’t too impressed with the wired TRN releases for 2020 (for tonality), especially the higher end models like the TRN VX and TRN BA8 (let’s ignore the $15000 golden ears TRN), but I really like the tuning of the TRN T300 here. There’s no harsh upper mids/treble/sibilance fest here, and if they used this tuning in one of their wired releases, I’m sure it will sell very well.

Technicalities wise, clarity, details, imaging and instrument separation are above average for TWS standards. Soundstage is above average in all 3 dimensions, though music can get congested in very complex pieces or with competing riffs. In general, wired gear will still beat most TWS at the same price bracket, so don’t be expecting a technical tour de force for this set (when compared to traditional wired hybrids), but it is still quite good overall for a TWS set.

Timbre is quite good for acoustic instruments, this set can be a good pairing for most music genres.

Connectivity is poorer on the Tronsmart Apollo Bold, it suffers from occasional drop outs and pairing issues and has a lesser BT range than the TRN T300.

In terms of note weight, the Tronsmart Apollo Bold is thinner, but it has better technicalities in the area of clarity, imaging, soundstage, instrument separation, details. A few folks in the TWS threads on audio forums didn’t like the too boomy bass of the Tronsmart Apollo Bold (though the app has EQ functions to give a less bassy profile), so in a way the TRN T300’s tuning is more versatile and should be more consumer friendly, with the U shaped tuning.

The TRN T300 beats the TFZ B.V2 in most areas, including battery life, technicalities, fit, BT connectivity/range. The TFZ B.V2 also doesn’t support wireless charging and the charging case has no battery indicator.

The TRN T300 is quite the complete package for a TWS set. I do recommend this set to those who are looking for a well tuned TWS set, it sports a coherent U shaped signature that is very atypical from the usual harsh and overly bright TRN tuning.

In addition to the great tuning, the TRN T300 boasts good BT connectivity/support, a good fit, and some nice aspects like IP45 waterproofing, volume controls, wireless charging and a charging case and well implemented touch controls. Perhaps small nitpicks would be the average battery life and average isolation.

IMHO, TRN didn’t have the best 2020 with its more expensive wired releases, but I think TRN has started this year with a very good set (though it isn’t a wired set). If they do use this same tuning in some of their wired releases for this year, I think they will be on to a winner!
Reactions: trellus
Excellent sounding tws iem
Pros: Great tuning!
Detail and extension of 2 ba
Nice low end
Neutral and fun sounding without any harsh or sibilance
Best sounding tws ive tried
Cons: Volume controls on iem
Tips could be better
More volume?
Not good for phone calls
TRN T300
4 hours of play per charge 1 per iem and 6 additional with case for 28 hours.
Well done tuning!
No harsh or sibilance at all. Relaxed fun sound with the detail and extension of 2 ba
Good mids and treble!!
Dd for lows just slightly above neutral with good sub bass
Best tws ive tried to date.
Only cons are included tips were a tad small for me and the volume controls were hard to work on the iem itself.
No noise or hiss at all , plays up to medium to med high volume
Doesn’t go as loud as separate TRS BT 20S module.
Recommend!!!
Mic doesn’t work that well for phone calls
Reactions: baskingshark