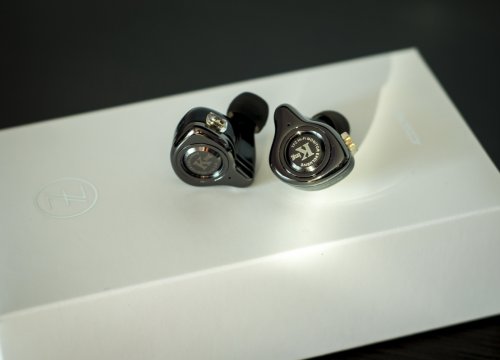 Pros: good bass detail and presence, great treble extension for single dynamic, engaging sound, good fit
Cons: obvious brighter signature, lower mids are bit recessed
We should admit that before starting to write this review we’ve seen lots of articles, pictures and feedback describing different TFZ brand IEMs. By the time we’ve got our unit on hands we were already concerned with its huge popularity, reaching Western audience as well. We are like hanging behind in this respect but ready jump in this train by providing our impressions of their latest incarnation of KING Exclusive Upgraded IEMs (we would call it KING Exclusive UPG to make it a bit shorter).

Prior to start, we would like to share some of TFZ brand (which stands for The Fragrant Zither) background. This brand was found in year 2015 by a group of audio enthusiasts whose idea was the product personalization and precise niche targeting. Since that time, TFZ has managed to release more than 15 products and their subsequent versions in IEMs and overheads categories, whereas sales of some of those are measured in thousands (like KING, for example). Currently, TFZ is not only selling in more than 30 countries, but also cooperating closely with professional musicians and music bands which derives the further experience for this brand in audio equipment design and tuning. Furthermore, TFZ won Japanese VGP award twice (you can find the record about that on VGP website). This award is given for the best innovations, market developement or most popular products.

Consequently, we would consider TFZ brand as already matured that automatically shift our expectation a bit higher. Desperately waited and rubbed our hands while TFZ KING Exclusive UPG was on its way. Spent 4 days examining its sound and ready to present our impressions!

TFZ KING Exclusive UPG technical specifications:
One more word about a bit of a mess in TFZ lineup — they have released so many IEMs followed by upgraded versions that it is kind of tricky to identify which one to buy and which one is the latest. In our case it is KING Exclusive Upgraded. TFZ states that KING series IEMs are high-resolution, non-stained monitor earphones, providing transient performance, 5~40kHz frequency response range, showing high on-site restoration and music details. Suitable for most styles of music, especially for ACG and classics. At the same time, KING Exclusive is based on the structural appearance of SERIES 5S, features the new generation of 12MM dual magnetic circuit self-divided graphene unit. KING IEMs are recommended to use with smaller diameter eartips and with the warm sources.

TFZ has its own point of view how their products should be packaged, exhibited and delivered to customers.

We wouldn’t call this unique but their approach towards box design is deviating from numerous Chinese brands at least. Tall white box, colorful imprints, transparent front cover to expose IEMs, plenty of information about the product inside.

IEMs are placed on stiff nylon podium with special openings, cable is underneath in separate compartment and there is one more box for the additional accessories. The box contents are:

But we are greedy enough not to compain about that.

Each channel of TFZ KING IEMs is made of two pieces — top aluminum cover and plastic base. Parts aligment is great, no rattling, no sharp borders and no free play.

Top cover has a shiny polished look with model logo and name printed right at the center. One compensation opening is also located there. Another one is located on the inner part of the base together with channel indicators. Output nozzles are protruding from the bases and covered with aluminum filters.

Stock cable is 4 core silver-plated OFC, twisted, with standard 0.78MM 2pin connectors. It features elastic trasparent earguides, transparent plastic connector housings with channel indicators, plastic Y-splitter, aluminum casing of 3.5mm gold-plated stereo jack. As TFZ mentiones — there is always an option to upgrade from stock cable to more advanced TFZ TC-3:
featuring the same additional elements except the earguides. We have decided to give it a try and would give our impressions on that upgrade as well.

You can purchase TFZ TC-3 upgrade cable at PenonAudio store

TFZ KING fit is nice, not causing any kind of discomfort during long use. No problems even with TC-3 cable which doesn’t have earguides. Not the best IEMs for exercising due to other factors like the absence of sweat protection, but could be used like that if no other more suitable options are available.

KING Exclusive UPG are able to deliver deep bass with good extension and more than average texturing. Its presence is well pronounced and contoured but the amount would not tend to overlap with other frequencies. Lows can go very deep to make you feel it instead of hearing, which is a benefit, we would say. Despite its good pronunciation and presence, severe bass addicts might still leave unsatisfied — the nature of bass here is more about textures rather than boomy sound. KING would only slightly elevate lows to compensate great extent of treble range.

Midbass is full-bodied, have enough power and air to recreate all drum sessions with excellent expression and articulation. Good overal speed and control but sounding a bit brighter than we would prefer.

In overall, KING Exclusive UPG showing very good performace on lower end, especially if considering its sound picture in full. Give it more lows and it would result in overemphasis and a bit less would lead to lack of good balance.

Lower mids are a bit laid back whereas upper mids are slightly elevated. Male vocals would sometimes sound thin and distant. This is true for some tracks while others would sound normal. Perhaps, depends of the initial track EQ. Female vocals are brought to front, sound very natural, transparent and engaging. Resolution of mids is decent, less than we’d expect from bright armature IEMs but much more than in the most of signle dynamic driver models. Moreover, the tonality of mids is on the brighter side and closer to BA drivers. The result is lively and detailed performance on mids but a bit prone to lisping on female vocals, consequently.

This is where TFZ KING Exclusive UPG really shines. If you ever thought that single dynamic driver cannot compete in airy feel and presence of treble with balanced armature models — you were wrong. KING treble is sparky and the amount is stunning. It lacks the micro details and articulation of armature driver models but has airy and transparent feel and forms the bright essence of the tonality. It might even become too much at highest volume but stays balanced at normal or lower volumes. This is probably why TFZ mentioned that warm sound sources would be more suitable — amount and extention would stay high while the excess of brightness would be eliminated by the source. Anyway, TFZ KING treble is decent for dynamic IEMs and not so overly emphasized as in some hybrid models. We would say that fans of dynamic IEMs once tempted by hybrid/BA higher end would love TFZ KING as the best compromise.

There is a difference mostly about the additional overtones in slow rock songs with tube-amp powered guitar playing solely and more thickness to sound in mid section in overall. When it comes to faster music or larger amount of instruments — our ears are not trained well to spot much changes. We do understand that the reason to upgrade is mostly for the sake of conscience because the stock cable is ok but even our rare experience with different cables would let us hear a bit of advantage. IMO.

TFZ KING Exclusive UPG sound can be described as U-shaped, tend to brighter and cooler side of the tonality, with very good lower and higher ends extension, powerful midbass, recessed lower and elevated upper mids. Suitable for most of the genres, especially those that are filled with drums, instruments in mids|treble section and female vocals.

EARNINE EN1J are single BA driver IEMs with mids-oriented tuning, more neutral sound and lack of bass and midbass presence. Direct comparison to TFZ KING is not fair, despite the similar pricing. Just completely different worlds, for completely different scenarios. If you’d like to monitor mids — EN1J is the better option. All other purposes would be served better by KING.

As it is understood from it’s name — TANCHJIM DARKSIDE were developed with great lower end extension in mind. We wouldn’t say that they are more bassy, no, it is just about the additional resolution and texturing of lows that makes DARKSIDE IEMs a better performer in this respect. On the other hand, KING have more treble presence and better resolution. KING sound much brighter, whereas TANCHJIM sound is warm and dark.

As the matter of fact, the closest rivals in terms of sound quality would be something more expensive from up to $130 range. The main KING advantage is the astonishing treble KING is capable of despite its single dynamic driver. This can be considered as its highest virtue or the worst drawback…this would depend of the initial customer understanding of its sound signature. Despite exhibiting a bit more brighter sound than we would prefer, our conclusion is that TFZ KING Exclusive UPG are excellent IEMs in terms of build|sound quality, slightly underpriced and definitely one of the best options to consider.