Now I wish I could've put more time into these great earphones, but circumstances at work and home made that very difficult for me and I used every opportunity to give them all the time and attention I could. Alas it wasn't really enough, IMO, to do a full in-depth review. It was just a bad week for me.

The design is subtle and appealing. The silver accents are great but I would've like them better in fully black. Cable is as "stock" as it gets. Not much else to say on this regard.

Aluminium(?) housing is really nice. It's rounded at the edges. Cables are not so exciting but do have good strain relief. The cable has a lot of memory and you get some mechanical noise when using them on the go.
You can get some pretty bad driver flex with some ear tips. I've found that the small triple flange tips to be the best fit for my ears, and have to least amount of driver flex.

Firstly I'd like to say that these sound DARK! Very dark. They somewhat remind me of the Mad Dogs 3.2. The frequency response, to my ears, sounds like it's on a downward slope from 30Hz all the way to 6Khz where it drops off about 10db and stay that way to my limit of hearing. Though clarity is surprisingly pretty good.

The bass is spectacular. Out of all the cons I can think of with the earphone, I will always forgive them because of how good the bass sounds. It's visceral (when amped) and plentiful, with good control. It stays coherent down to 30Hz, thereafter it fades away. It leaks a bit into the mids, imo, this is why it sounds so dark.

The mids are nice. Not forward, maybe a little bit on the laid back side. Male vocals sound better than the females.

Treble, or the lack of, is probably the worst part of the TwinWoofer. The lack of treble beyond 6kHz really hinders the sound. No sparkle or air. The soundstage also takes a hit. Most of the songs sound blunted/muted. I actually got my E17 EQ and raise the treble all the way up to +10bd, and the change was surprising. With the missing treble back, these earphone really open up. The sound stage becomes wider, you start to sense a bit of air between instruments, yet still no sparkle. Female vocals are brought back to life and the overall clarity of the sound is increase dramatically.


What was originally an earphone I didn't like at first turned out to be a really enjoyable listen. After bumping up the treble, these earphone really become worthy contender. IEMs have never actually surprised me, but these did in the end.

For $50, I might look into acquiring these down the line and put the Xiaomi Pistons aside.

P.S.
Thanks to @Brooko & @H20Fidelity for the opportunity of trying these awesome IEMs out. Sorry I couldn't put more time into reviewing them.
Reactions: Brooko
Pros: Solid punchy bass, great air and openness to the mids and highs.
Cons: Builds not stellar, bit much bass, mids a bit too distant.
Tekfusion Twinwoofers Quick Review

Thanks to Tekfusion for the sample.

Build Quality:  The buds are metal and sturdy.  The cable and jack feel a touch on the delicate side.

Isolation:  Pretty good for a dynamic.  The usual story, fine for on a bus, maybe not so much for Tube or a long flight.  Still more than enough to get yourself run over of course.

Comfort/Fit:  Great on both accounts.  The things weigh next to nothing.  They got shoved in ears and that was that.  Good stuff.

Aesthetics:  The buds are a touch pretty, the cable less so.  They look fine, nothing particularly note worthy.

Sound:  Excellent.  Not anything like as bassy as the name had me expecting though.  Yes the bass is pretty elevated and yes it stands well forward of the mids but I was expecting a real bass cannon.  It’s still enough to make me feel an EQ down wouldn't hurt; a bit of a bump in the mids too I wouldn't mind.  Quality wise its firm and sold.  Tonally things are all a bit warm but dry, mids are airy and breathy, highs shimmering and delicate.  Speaking of highs they a bit elevated too but have next to no abrasiveness to them.  Just a wash of silvery shimmering at the top end.  Reasonable extension on them.  Still I’d like the faintly delicate nature of the vocals and the accordant width to perhaps have a little more forward focus.  Still, can’t have everything.  Detail levels are superb for the money and really gives the GR06 a run for its money as the former king of the circa US$50 area.  The Twinwoofer could too make a claim to that title.  Granted the bass is a bit on the humpy and the mids are much too distant for my tastes but the quality of the mids is great.  The bass is firm and punchy, a little more softness would work better given its quantity I think but, hey, I’m no basshead.  I wish there was more made of the quality of the mids, yeah the width is lovely and air they have but please sir, may I have some more sir?  Think kinda V shaped with a bass slant to it.

Value:  Very good.  I can’t say it’s "better" than the GR06 but sound for your money its every bit as good if you desire its signature.  Its build feels a rather less substantial though.

Pro’s:   Solid punchy bass, great air and openness to the mids and highs.

Con’s:  Builds not stellar, bit much bass, mids a bit too distant. 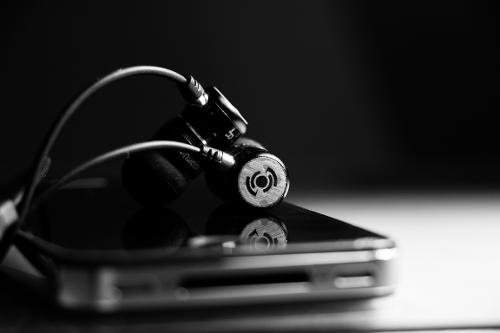 A big thanks to TekFusion for sending the TwinWoofer in for review and Ibrahim for taking the photo shots!

TekFusion is a brand new fresh company based in India. Targeted for consumer priced basshead IEM. While there has been plenty of bassy IEMs in the market priced similarly as the TwinWoofer [$50], TekFusion differentiated their TwinWoofer very well from others by offering a different definition of “Basshead IEM”, more about that later in the sound part.

TekFusion offers two types of TwinWoofers, the mobile version and the original version. The mobile version comes with a remote and mic mainly for Windows, Andriod and Blackberry but surprisingly, there is no mention of Apple device support on their website for whatever reason it may be nor am I sure if the remote and mic will work on iOS devices. The TwinWoofer M [stands for “Mobile”] also comes with an extra hard case for extra protection while on the go. Other than that, I believe both will sound and function just the same. There are two color choices available for the original TwinWoofer and they are, black or white color.

The box that came with the TwinWoofer that I received is damaged pretty badly for some reason, but the unit and all accessories inside were in perfect condition. The packaging is pretty large, but thin. Nothing fancy, but it comes with a soft carrying pouch, cable clip, and 5 pairs of silicone eartips including 3 single flanged tips [S, M, L] and 2 triple-flanged tips [S, L]. The earphone itself weights 7.5g each side and that is arguably lightweight despite its metal construction. 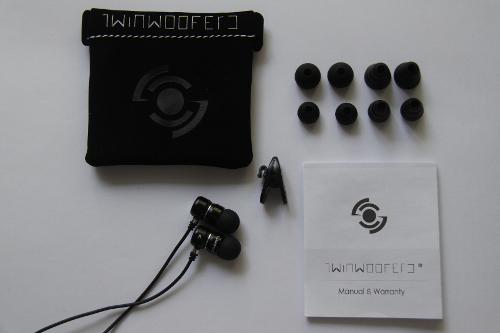 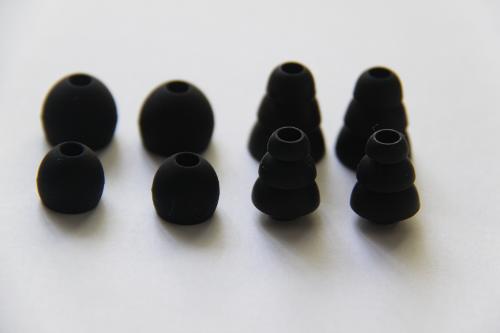 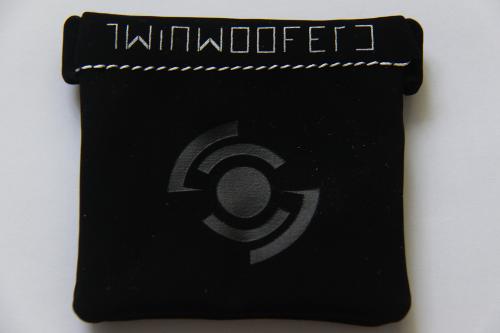 The earpiece construction is great and are made of metal housing, however, the cable itself can be struggling some as it is rather thin and microphonic. The jacks are small enough to fit into any device even with thick case, but do note that, it is a straight headphone jack instead of 90 degrees. Depending on use and preference, some may prefer the angled jack and vice versa. 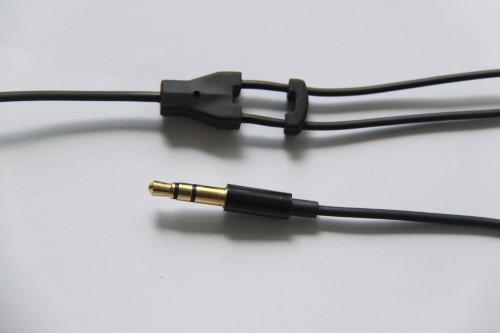 The bullet design earphone allows insertion to ear canal can be done easily and I am not sure how many times have I told Harry at TwinWoofer how much I adore the design already. The team lead in the design was the CEO of TekFusion, Mr.Jayesh and the designer lead Mr.Darshan along with the other team of designers/engineers. Whoever, the rest of them may be, they, together, did an excellent job with the housing design that appears to the crowd and fits easily into our ears. They do not only look good on the picture, they feel well constructed when on hand as well.

The easily perfected fit resulted in a huge amount of isolation even with the single flange tips. While the silicone eartips is not the highest quality I have ever seen, but it is definitely of standard quality. The wide choices of eartips allow the user to find the perfect tips for sure and the triple flange tips for extra isolation. It is one of my best isolating IEM under $100 including the RockJaw Alfa Genus.

When I first received the TwinWoofer, I was slightly disappointed by its bass, but after giving it a fair amount of burn in, I started to like them more and more. This review is done after more than 100 hours of burn in.
As its name suggests, “TwinWoofer”, the “Woofer” itself says it all but please don’t mistake the name, the TwinWoofer is a single dynamic driver earphone on each side not double as the name may have suggested, but it does feel like there’s “Twin Woofer” built into it when it comes to the sub-bass. It goes so deep that it does not feel like just a single driver doing its work; truly a miracle for a sub $50 IEM.

Not only does its bass goes deep, they are huge and very well textured. With burn in, they will sound tighter and bleeds less to the midrange. Although there is still slight bleeding in bass to the midrange, I still find it enjoyable with EDM music or anything that requires deep and huge sub bass. Not only does the massive bass makes music more enjoyable, it helps in complimenting the sharp upper midrange by making the spikes less obvious. Similar to what the silver filter did to the RockJaw Alfa Genus.

Most of the IEMs with such gigantic bass usually have a very V-shaped sound with the midrange being recessed to the state that it can’t be heard. Surprisingly, it is not the case for TwinWoofer, the midrange is not at all recessed in fact, there’s quite a bit of them present in the music. While it can be slightly dry at times at the bottom with certain tracks but not all. Drum kicks hard when called and the aggressive upper midrange makes it great with Rocks and Aggressive genre of music.

There is an obvious sharp roll-off at the high region after the upper midrange spikes which resulted in the lack of details in comparison to other sub $100 IEMs but at the same time, very forgiving to bad recordings. Some instruments can feel rather bland as some may have preferred. Instrumental separation and soundstage are decently done as an in ear.

I simply prefer the TwinWoofer better than the Jabra Vox, A-Jays Five in terms of every aspect without exception in terms of sound, build, isolation and fit. If anything, TekFusion should take to improve the cable quality into deep consideration. It’s real competition comes when put against the RockJaw Alfa Genus.

The TekFusion TwinWoofer definitely scales better than its price may have suggested. For basshead, they will appreciate the massive amount and deep bass it offers. Travelers will appreciate its great isolation and for $50, I can’t think of anything else better. Again, if TekFusion could improve the cable quality without affecting the price, that will be perfect at its own price already!
Reactions: Harry1986

Harry1986
Great review! Thanks a lot.

BarbecueGamer
Really nice review man. Hey, do you still plan on doing a review of the NAD Viso HP50's?