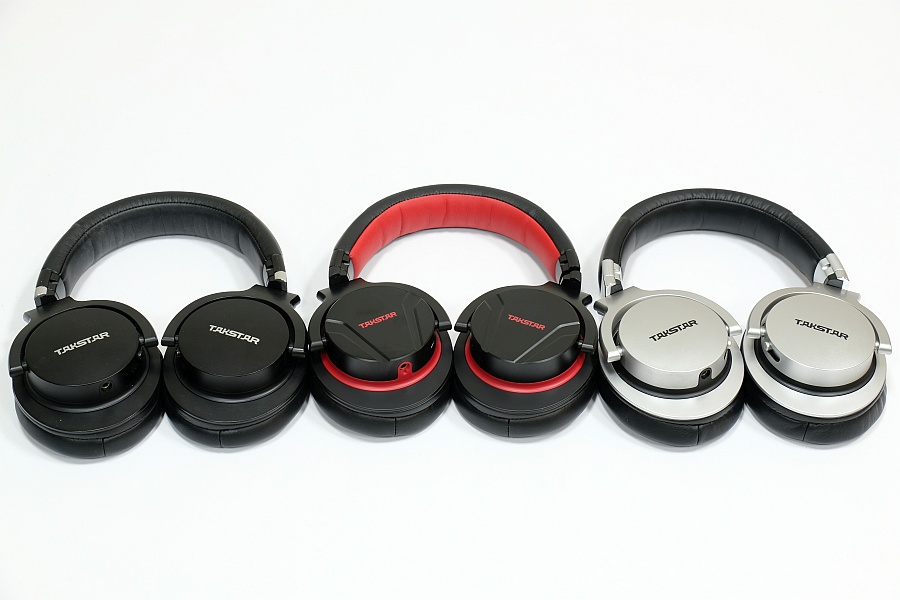 A bass-heavy version of the famous Takstar Pro 82, providing great bass response all the way down to 20Hz. The bass is very close to Fostex TH900 MK2 in both quality and quantity.
Perfect comfort for long listening and gaming sessions.

Finally, a full review of Takstar GM200!
I will be comparing to its predecessor Pro 82s and it's OEM counterpart - MH751. GM200 is a gamer-oriented headphone, so it adapts a bit more aggressive styling: A look at the cables: GM200 comes with 2 cables + a 2m splitter cable, MH751 come with just 1 cable and a short splitter.
GM200 accepts Pro 82 stock cables and replacement cables from Ali (including micced) - MH751 only works with its stock cable, and there are no replacement cables to find.
Also, MH751 cable "locks in" , making it not easily removable in case of an accident - if it will be pulled hard, both cable and the socket may get damaged.

Microphone on GM200 sounds the same as MH751, except for darker background.

Isolation/Leakage:
Since the cups and the pads are the same as on Pro 82 - there is just as little leakage, and excellent isolation - not enough for bus/train, but perfect for a noisy office.
I think that MH751 provides similar results, despite inferior pads.

Sound Quality:
Bass is the region that makes all the difference from Pro 82 v2. Look at the FR below:

This is another proof that Pro 82's sound was modeled after TH900 MK2.
First, Takstar puts out Pro 82 v1 - a more audiophile version of TH900 MK2, with much flatter response - no bass boost and no mids crashing after 1kHz.
Then, they put out Pro 82 v2 - with even flatter response, thanks to getting rid of the treble peak too (just look at that 7-8kHz peak of TH900 MK2 above!).
Now, they create a perfect "audiophile basshead" headphone - the bass (including sub-bass) is almost at the TH900 MK2 level, but the mids are still flat, and the treble peaks are still gone - so no V-shaped signature!
Whoever is the engineer that tuned these 3 headphones - he deserves a medal!

Of course, quantity is nice, but what about the quality of the bass? After all, MH751 measures very closely to GM200 - are they both "audiophile basshead" headphones?
The answer is "no": As you can see, MH751 is missing the bass ports. Don't forget, even TH900MK2 is just "semi-closed" - fully closed headphones can produce a lot of bass, but the quality will suffer.
Bass ports allow GM200 to improve the quality of the bass compared to MH751, without sacrificing isolation.
.
Bass hits equally hard on GM200 and MH751, but on GM200 it has a better definition
Bass is tighter on Pro 82, but "meatier" on GM200 - just like it is on TH900 MK2.

Mids and treble sound very similar on GM200 and Pro 82 - but the tonal balance of GM200 is warmer, shifting the timbre just a bit off - not by much though, it's still better than many much more expensive headphones.
The electrostat-like transparency of Pro 82 is slightly reduced on GM200 as well.

I would say that GM200 sounds closest to Sony Z1R - they both sound like a warmer version of Pro 82 with meatier bass.
GM200 would probably have the edge on bass control and timbre, while Z1R would definitely have wider soundstage - I don't have Z1R to A/B with me, have to rely on my notes and memory.

Amp/DAC advice:
Due to the shift in tonal balance, Pro 82's "synergy combos" don't have the same effect on GM200.

GM200 sounds better from more transparent DACs - Oppo HA-2 + O2 sounds better than SMSL Idea + O2.
SMSL IQ + O2 sounds even better, especially in bass definition.
SMSL IQ alone loses on bass quality compared to SMSL IQ + O2, the O2 adds better control.
Using Little Bear P10 with SMSL IQ can add a little "oomph" in the bass and some euphony in the mids - a welcome combination for many, but too much for me.

These codes are active until October 10th 2020.
These are exclusive codes, please don't share them outside Head-Fi!

ftoss
Ok. It seems that GM200 has attached bass unlike pro 82 (bass boost fully open). And it's much better, which is not surprising.

P.S. IMO this Fostex FR graph reminds MSUR N650.
C
CunzCousland
Hi, what is the soundstage like of this headphone? Pretty much i have only been using IEM's and i'm kinda interested in this headphone as i'm craving for a wide soundstage with a fun and satisfying bass boost that is not going to drown the mids too much.

BenF
Soundstage is wide and deep, very realistic - I love listening to live recordings on GM200. Sounds like GM200 is exactly what you need.
On the 11.11 sale it will be 55$ (with the "Head-Fi" code) in the TakstarAudio store - don't miss it!
Read more…