Menu
Log in
Register
SoundPEATS Bluetooth Transmitter/Receiver - Reviews
Overview Reviews (1) Gallery
Pros: Genuinely useful, good sound quality, reasonably powerful, good battery life. APTX.
Cons: Feels cheap and plasticy, tiny buttons
As an avid wireless headphone user I've always wanted to be able to pair my TV up to my wireless headphones for both movies and gaming. One of the more common problems when attempting to do this is lag - or lip sync problems.

This device is designed to connect to an analogue output - either line out or headphone socket, and then transmit that signal to a paired device - i.e. headphones. Alternatively it can also be used as a bluetooth receiver - you connect your conventional wired headphones to the device which then picks up the bluetooth signal from your player and reproduces it to your headphones. The good news is that it uses aptx - this helps both reduce lag and improve sound quality. 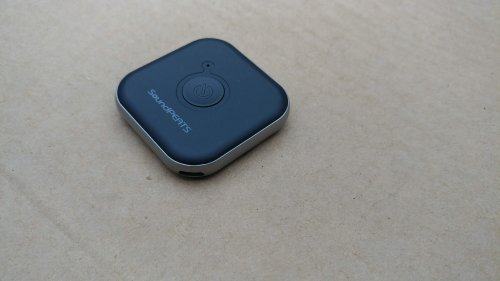 The SoundPEATS bluetooth audio adapter is a fairly small device with conventional (not touch sensitive) buttons. This can be ideal when using the device with headphones and you want to control the device by feel rather than having to look at touch-sensitive buttons but this does make the device feel somewhat cheap.

The device comes with three cables - headphone jack to two phonos, headphone jack to headphone jack and a USB cable for charging. There's even a hard-wired end to end adapter so you could connect the device directly to your headphones without having a wire dangling around your head. Amplification is sufficient to drive even the most demanding of headphones - such as the Sennheiser HD598sr to high levels without distortion. 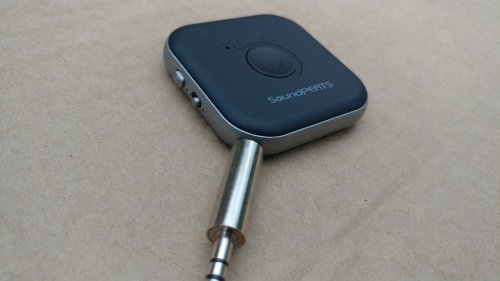 I decided to test the device out by connecting it to the headphone output of my TV and try an assortment of different wireless headphones out on movies and video games. A couple of ways in which you can test the sync capabilities are Battlefield 3 and Hickok 45’s excellent gun reviews on YouTube. There's absolutely no way you can't spot sync issues when it comes to guns going off!

I tried a number of headphones out with the device and was rather surprised by the outcome.

No problems with sync which was rather surprising when you consider they don't use aptx. I was very impressed with the sound coming from Battlefield 3 - deep bass - a couple of explosions really made me jump a couple of times.

Worked quite well but I found that the sound was slightly softer sounding when compared with the Airpods - this resulted in me turning up the volume a little more than I would normally have it at to just to squeeze out a little more dynamics.

This combination worked out fairly well but the headphones do leak a considerable amount of sound out in to the room - not taking ideal when you're shooting off a machine guns and rocket launchers in your games.

I was really impressed with the performance of the Airpods when used with this device. Note that I had to ramp the TV volume up to max in order to get any real volume out of it. This may be simply the limited output from my particular TV - your results may vary.

Switching modes and using the device as a receiver the sound quality was pretty good. Not perhaps as good as the Aqua+ bluetooth amplifier, but not bad at all when you consider both the price difference and the fact that the Aqua+ can only be used as a receiver. The electronics ‘noise’ from the device was virtually non existent which is good news for anyone who likes to listen to music at low volumes.

I've not had a chance to test out the battery life - but it did charge pretty quickly. The device used a standard micro USB for charging and can be charged from pretty much any USB socket or charger.

The only criticism that I would have with the adaptor is:

Tiny buttons for play and volume.
Plastic construction - tends to feel a little cheap.
Buttons rather than a dial for volume control.

All these points are comparatively trivial - especially when you take into account the price and genuinely useful multi function aspects of this device. From turning a conventional pair of headphones into wireless ones to being able to connect your device wirelessly to your car stereo. Whilst the device feels somewhat cheap, it does have the advantage of being very light - this is useful when using this as a wireless headphone amplifier. Highly recommended.
Reactions: B9Scrambler