Loading…
Pros: Very comfortable, excels at certain genres
Cons: Bass hump kills a lot of details, recessed vocals and darker than average presentation
Oh wow, I actually have a set of headphones that I can review that was released quite recently.  And by those, they are the MDR-10R family.  Released in Sept. 2013 at MSRP of $200/$250/$300 ish for normal, Bluetooth, and Noise Cancelling Editions, they have gone down to more affordable and reasonable price of $100 (10R)/$150 (10RBT/RDC)/$200(RNC), pending your local retailer availability of course.

Their heritage isn't tied to the nigh legendary MDR-R10 as its name would suggest. For the record, the Sony MDR-R10 is considered the magnum opus of Sony Headphones (not unlike the Sennheiser HD800s) but to the previously high end MDR-1R.  And they all can probably trace their lineage back to Qualia 005 and the MDR-SA line of headphones, boasting some ridonkoulus frequency response number.  Not as ridiculous as Qualias and MDR-SAs, but take a big grain of salt with those numbers.  So, these are in essence, Sony's take on the Bose's On-Ear Noise Cancelling phones, the QC15, the Audio Technica ANCs and the like, and not the Beats (those would be the Cowell endorsed X10s and the XBA lines).  How do they compare to the mid-range headphones?  Let's roll and find out.

Note: This reviews both 10R and 10RNC(RDC in this case, but the two are essentially the same, see below)

Aesthetics:  Sleek.  Sleekest from Sony in quite a while.  Understated black with red and silver trim.  There's a all white model for 10R.  A perfect match for your white iPod from 2006.

Otherwise, these are quite nice looking.

Ergonomics: Much comfort, such soft, wowowowow.

Sorry for channeling teh Doge there for a second, but it is quite comfy and soft.  Memory foam like padding on the ears and on the band covered by faux leatherette that's heaps better than ones used in cheaper headphones.  Time will tell whether or not these will peel off like cheap vinyl covering.  But so far, so good.  Nowhere near as plushy as XBAs but won't trap heat like XBAs either. But I wish Sony's would really wise up and use velours for their higher end headphones, 10Rs included.

Because the padding is leather, it will trap heat.  Other than that, the headphones are really nice for extended wearing.  Also, the drivers do turn 90 degrees towards your body, in case when you need to remove and listen to your surroundings.  That's a very nice touch.

Handling:  Most portables shouldn't have an issue driving either or to satisfactory volume levels.  The 10RNC requires AAA for noise cancelling but will work without, at reduced sound quality and volume, with volume being the most noticeable trait negatively affected.  I think I have a reason as why this is the case, which you will see below.

Sound: In a word dark.  It will warm up eventually but not as much as other Sony cans you might be used to.

Bass: There is a prominent mid-bass hump, I think around 100-200 Hz area.  You can see the measurements from Goldenears.net, and they bear this out on other two MDR-10R line of family (RBT and RC).  And I suspect this is very much the same on these two models.  Much as I might, it's very hard to tone down the bass via EQ on the walkmans and what not.  I suspect this is more of the function of the source rather than the headphones, but at the same time, it doesn't take that well to EQ either.

To be sure, it's not the wet, flabby, out of control bass you might think of.  It's thick and juicy, but at the same time, it's not flabby.  However it overwhelms, in the manner reminiscent of MEGABASS that Sony portables were known for.  (Whatever happened to MegaBass anyways?)  It does work quite well for portable mobile use, and makes the music fun.  But if you're seeking something that is more accurate to the source, you will want something else.

Midrange: Fairly behind in terms of things.  Slow and veiled at times.  It's more veiled with female vocals compared to males, it seems.  I've read nasal and what not on other reviews, but I didn't hear a hint of it.

Treble: Can be veiled at times, especially pre-burn in (mental or otherwise).  It will eventually open up and reveal more detail.  Initially, it's quite veiled and very much gets lost in the bass bump.  Once it's broken in, it will reveal itself, but it's still behind the veil of the 100-200Hz bump.  That bump makes it hard to pick out some of the details, especially in genres that demand mid to treble details, including Jazz, Classical, and Movie Soundtracks.  But if your source can accommodate for such, you will find heap of details.

Noise Cancelling: Competent, with bit of self noise added it. There are two mic drivers per ear, one towards the outside/bottom of the driver housing and one inside the driver itself.  Idea is to take the noise sample of outside and inside the driver (where there will be some noise seeping in) and try to match the profile to one of several profiles built in.  It works well enough in office environment, as well as ATH-ANC7b.  That inner mic does protrude a bit, and as a comfort measurement, the driver padding employs a thicker cloth to cover the driver.  I suspect this does color the sound a bit more, but it's nothing that is too different from other models to be really noteworthy.

When ANC is inactive, there is additional veil over the trebles along with the expected loss of volume.  It's not as bad as some ANCs that won't either active or have really terrible sound output (like ATH-ANC27... those are horrid without ANC).  But it's nothing home to write about either.  If anything, the thicker cloth works against unpowered mode, I'd wager.

My MDR-10RNC (purchased at Costco) came with single cable, a carrying case, the aircraft adapter.  I understand that the standard 10RNC comes with 2x cables, one for smartphones and one for standard listening.  Speaking of cables, though it takes standard 3.5mm to 3.5mm cables, one of the end is really narrow (think original iPhone cable), so that the cable is more or less proprietary, unless you're willing to do some work to mod existing cables.  Bad move, as the MDR-1R nor X10 suffers from that.  Why they did this for 10R family is... baffling.  Also, the 10Rs comes with a ballstic nylon pouch whereas the 10RNC has a hard carrying case.  Again, these are $200 MSRP, so Sony could've easily thrown in a hard case at most few bucks.  Sure, slightly better than normal pouch but a carrying case would've been nicer.

Final Thoughts: These are very dark sounding headphones, the darkest that Sony's produced in recent memory.  The closest match I can think of is possibly Sennheiser HD555/595s or the like.  Actually, strike that, they remind me of extra bassy MDR-SA1000s.  There's plenty of detail to be found, if you can dig it out from all that bass.   For $100~$150, these are competently priced  and performing, but not as well as some of the more well known and established $100 sets.  I think you know where I'm heading, right? (the usual suspect of Senn 518s/558s, the very much value positioned Superluxes and the Meelecs, and occasional AT-M40s/50s, Sony's own MDR-ZX700s and 7506s/V6s just to rattle off several off top of my head)

So, are you prepared to dig in?

Note: The MDR-10RDC was reviewed, which seems to be Costco exclusive.  They are 100% identical to MDR-10RNC, just differing in Accessories and packaging since all you're missing is the smartphone cable, and well, it's not worth additional $30 that Sony's asking for.  Go to Costco and get this for $169 (or $139 if there's still that $30 instant rebate).

Damage
I don't have access to 1Rs, but from what I can remember listening to store demo, it was a lot more balanced in its approach vs. the 10R.  You will want to use some sort of EQ, treble booster if you're on Apple devices.  You will want to refer to the measurements and boost up mid range accordingly.  Amping helps some what but not enough to make a difference (at least with E11).

Finally, the 10RNC does offer up slightly better trebles but still has very recessed mids like the 10R.

Agree on the unfortunate naming on 10R.  If this were made by other company, it would be considered pretty darn decent to slightly better than average.  But Sony's done a whole lot better for cheaper.  But there are no other headphones that are this comfy.

psonoda
I bought these headphones just for the noise canceling feature. It needed some break in but not as much as my HD700.

When I changed the battery, I now get crackle noise in the right channel. This happens regardless whether the cord is pluged in but only happens when the ANC is engaged. I am going to try a different battery. If not I will return back to costco.

It is unfortunate as I am on vacation when they failed. This happened after the included battery died. So I only got about 10-12 hours of actual use.

kashyap
I bought this headphones but it got damaged from Headband holder
does anyone can help me for that because it is much expensive
Pros: Comfortable, lightweight, detachable cables
Cons: Boomy bass, muffled vocals, nasal treble, unbalanced sound
Disclosure: I received these headphones from Sony Australia as a review sample to keep.

Here is my video review of the 10R, as well as some brief notes about the sound and build of the headphone. Please check out my channel if you enjoyed the video! 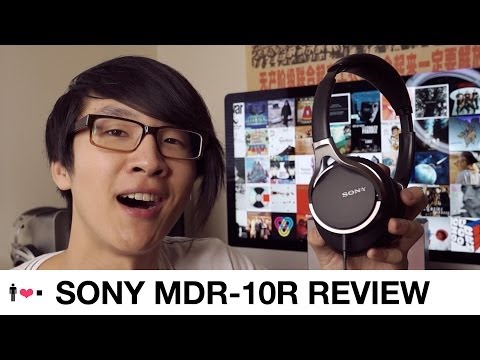 The 10R has a comfortable, lightweight design that is pretty much best in class for the ~$99 street prices I've seen for this headphone. However, the sound is extremely unbalanced, skewed towards a very boomy low end with vocals that sound muffled, while simultaneously having a peaky treble region that while it isn't super sibilant, ends up sounding somewhat nasal. Overall I really did not like the sound of these and they made me feel like I had a head cold every time I listened to them.

Your mileage may vary but personally if for around the same price I would be much happier to recommend the Audio Technica ATH-ES700 or Pioneer HDJ-1500 for portable headphones with bass punch and more natural, cleaner signatures.

PsychoS
Boomy low end?  I own a pair and I find them rather bass lite...
A
aylmert
Exactly... and it drowns out every detail when the bass comes in....MDR-1R seems to be better.