Headband pad is a little too firm, may need break in. Initially putting them on, the headband is feeling is evidently there but with time it slowly disappears. Earpads are not the softest nor particularly t thick but the low clamping force and lightness of the headphones make it acceptable.

Build quality is ok but reasonable in keeping the headphone light weight. Only the cup holder part of the headphone is magnesium, the rest is plastic.

Good driver depth for people with dumbo-like ears as they are angled steeper than the HD558 and AD900X.

When I put these , I was quickly reminded of my HD558 upgraded in almost every aspect. The sound signature is similar; forward and engaging but not in your face like grados. As someone who mostly uses Grados, I did not get the impression that these are dark sounding at all; HD558 is darker sounding. The highs may not be the most extended but it is not offensive making it well rounded for just about anything thrown at it. The sound is more crisp sounding than the HD558; clarity across the board is an improvement on the MA900. There is a good amount of detail but do not expect micro detail level extraction. The midrange sounds lively and works quite well with voices without sounding nasally for both female and male voices; I thought it worked well with both. The midrange sounds layered and is transparent; it is not thick sounding. The midrange is evidently clearer than the HD558,  especially vocals on the MA900 I much prefer over the HD558. The whole sound in general sounds more open and spaced apart. Sometimes vocals on the HD558 sound like they come from 1 point in the middle where as it doesn't on the MA900. The highs and mids work well together and sound balanced to me without one being too overly powering. In the bass region though, the HD558 hits harder and the low frequencies are louder. Low bass rumble is hard to hear on the Sony; maybe it is due to the housing enclosures as the HD558 is more encapsulating than the MA900 in physical design. I find the bass even lighter than the AD900X on the low end. I can totally picture a new buyer asking where the bass is; the only clear weakness. For me, it is fine but I can see someone wanting more. Both have a good midbass impact to make them enjoyable with pop music. The sound stage is not significantly wider than the HD558 but expect some improvement in depth and width just don't expect a world's difference. There is definitely a better sense of air. The separation is better on the MA900 vs the HD558; it is simply easier to differentiate fore ground and background. Also maybe for some office users, it's important to note that the MA900 leaks out sound more than the HD558 so you may annoy some coworkers nearby almost as much as Grados.

Would I buy these again? Yes I would. I may be looking to sell my HD558 now. I like the whole sound and wasn't sure what to expect in terms of sound. They met my expectations for the price and in some aspects exceeded. I thought the sound stage would be wider but I can't imagine anything wider than the AD900X. Not 100% sold on the general consensus that these are the most comfortable headphones ever but we'll see what happens through pad break-in although they are certainly light but weight alone does not determine comfort. If you like the HD558 but didn't like the midrange much, you may want to give these a try. Other than the bass, it's a clear step above the HD558 in every aspect in terms of sound. Crispy is the one word I would use to describe these.
Reactions: Hawaiibadboy

Redcarmoose
Thank-you for this review. These headphones don't get talked about here that much, though I feel they may be kind of a sleeper. More and more I read about them. Crazy in some ways that they don't get the attention that you would think they would get ? I have them in the running as my next over ear purchase so I will also write a review. There is something different about them as the driver size is huge, the open areas on the sides are an new style. The headband and construction seem very different and many like yourself are just getting used to the set-up. I have always liked the Sony house sound though it may have changed a little in the last 15 years? For some reason my instincts are saying buy these and I see this review come up. Maybe it's all suppose to work out and we get to enjoy great sounding value priced headphones? Cheers!

kite7
I'm very unfamiliar with Sony's house sound as this is my first purchase that isn't just a $15 can I had for over a decade ago from them. I would like to hear a flagship sony based on what I am hearing on the MA900 with better bass. If bass isn't your number 1 importance I think you would happy with the sound. The talk about them being very light and talk about the soundstage is what interested me in giving them a try. No glaring flaws, just wish the lower bass was louder with stronger impact. Not the nicest looking for the price but sound before appearance for me. I was not expecting this clarity I am hearing.
Pros: Sound, wide staging, instrument seperation,
Cons: ? Gold fabric in box? Seriously...thin cable...and...gold fabric cloth case. That's it 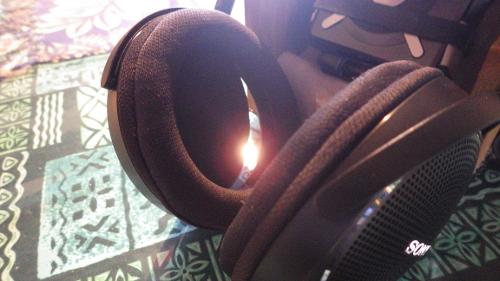 Enjoy​
​
Reactions: chillaxing
Pros: Sounds good .....
Cons: Not so good after I listened again
I managed to try this MDR-Ma900 against others in the same shop.

The comfort and ergonomics of this Sony are very good.

Initially, I was pleasantly surprised how nice it sounded.

But after a longer listen I realized there seems to be grains and slight harshness especially the violins and mid upper registers.

I compared the same track and different music to be sure and the same graininess was there.

At this price and time of writing, I think there are better models out there with better highs than this.
Read more…