Today we are going to be taking a look at the Sony AS800AP. When I saw first saw them and their Cadbury Mini Egg shape appear in Canadian outlets late in 2014, I knew I had to have them. They were waterproof, had a large 12mm dynamic driver, and looked quite unique compared to other sports earphones kicking about. Since there were no reviews of them at the time, I decided to drop the 79.99 CAD and risk a pricey purchase. What I didn't expect was for them to be as good as they were. 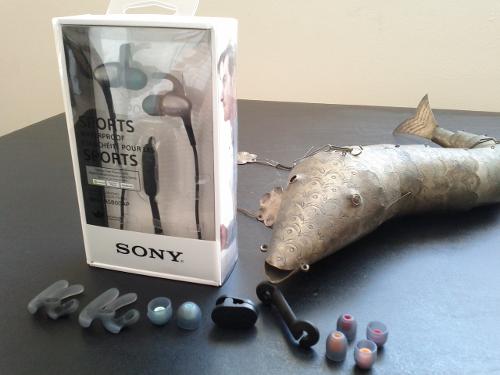 I purchased the AS800AP from Future Shop (RIP) in December of 2014, and have been thoroughly enjoying them even since. All comments within this review are my opinion and not that of Sony or any particular seller.

Lets start with a quick look at the included accessories. While more or less standard, the quality is top notch. Included are four sizes of extra long Sony Hybrid earbuds (ss, s, m, l). They provide a great seal and are comfortable, though I still prefer Sony's standard Hybrids. Three different sizes of stabilizers are also provided (s, m, l). I would like to see an 'ss' size since I have pretty average ears and the smallest stabilizers fit me without any room to spare (ie. perfectly). Someone with smaller ears would probably have to leave them off. Since they offer a significant advantage in both fit and comfort, this is a bit of an oversight in my opinion.

A shirt clip is also included. It is still hands down the best one I've received with an earphone due to its wide mouth and strong bite; necessary if you are active while listening. A quality carrying pouch is also provided. I would prefer a hard case, but the included one is made from a sturdy material and is more portable than a hard case. Like the AS800AP itself, this carrying case has held up well over the years and shows absolutely no signs of wear.

The AS800AP supports Sony Smart Key. This adds additional and programmable functionality to the multipurpose button on Android devices, such as song skipping, volume control, and more. While nice in concept, it did not work on either my old Nexus S or Moto G. I have yet to try it with the HTC One M8 and really haven't felt the need sime I have been using them so long without taking advantage of this feature.

These are also waterproof; IPX7. While I would love to test this out myself, I put down my hard-earned cash to get these and do not want to ruin them. They have handled my sweat just fine and am sure they would be fine if used in the rain.

The warranty is less than stellar and to be frank, disappointing at a mere three months. Luckily this earphone has proven itself to be bulletproof. Sony could learn a thing or two from Brainwavz as they back the majority of their products with a generous 24 months of coverage.

The cable is of average thickness, flexible, and features Sony's oft used serrated texture so they rarely tangle. The chin slider certainly helps prevent tangling during storage as well. The cable performs pretty well in cold weather which I appreciate given I live north of the good ole US of A. Strain reliefs for both the jack and housings are extra long and flexible. These are probably the best reliefs I have come across and instill confidence that this cable will be alive and kickin' for quite a while longer. There is no strain relief to the y-split/inline mic, but given the majority of bending happens at the jack and housings this is acceptable. The chin slider slides easily along the cable and does not shift itself out of place when in use. The inline mic works as expected, doing a reasonable job of nullifying wind and cable noise. My callers never had any issues hearing me.

The build quality has proven itself to be well above average. The cable is as I have come to expect from a Sony product; good, if not great. The inline mic is quite nice with the multipurpose button being covered in a waterproof sheath. The housings themselves are all plastic and quite large. They feel extremely solid and are well put together without any moulding artifacts or obvious gaps. This certainly feels like a quality product even if it looks a touch goofy. Outside of the cable developing some quirky little bends, the AS800AP looks exactly as it did when I first purchased them at the end of 2014. 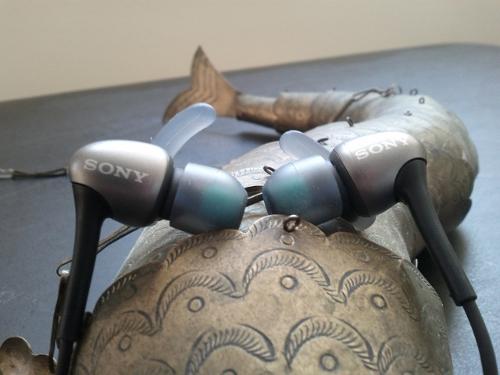 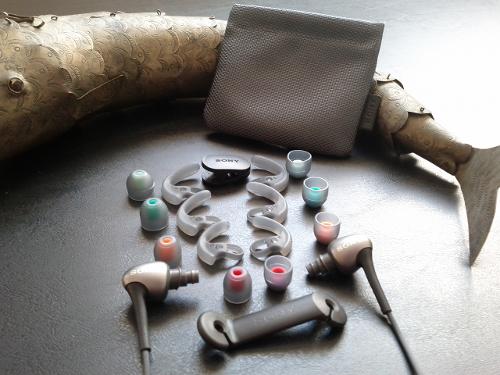 For a large-bodied earphone they are surprisingly light and comfortable. Cable noise is apparent when wearing them cable-down but is not overly intrusive. Removal of the stabilizers makes them a little more straightforward to wear since you don't have to worry about slotting the fins into your upper ear, but this seems to boost microphonics a touch. The AS800AP can be worn cable-up if you remove the stabilizers. This completely nullifies cable noise but is not an ideal way to wear them due to the extra long strain reliefs.

Isolation is pretty average for a dynamic driver. There are two small vents; one underneath the housing where the strain relief meets, and another under the stabilizing fin. The fin has a small path molded in to ensure the vent isn't blocked which is a nice detail. They do a good job of blocking out most sounds but let is just enough to be aware of your surroundings. Important if using them when jogging.

This is an area where the AS800AP has done nothing but impress. While they are a warm and bassy earphone, they do not make sacrifices to their mids or treble and are smartly tuned offering up a fairly balanced listening experience. With some eq and amping they are certainly capable of outputting some head-shaking bass but I prefer to listen to them stock so I can fully appreciate their capabilities.

The AS800AP is very easy to drive and does not require amping, though pairing them with the Topping NX1 results in tighter, reigned-in bass with an even response from the deepest subbass regions to their well-extended highs. Amping allows you to get the most out of this earphone but is not required for an enjoyable listening experience.

Treble is detailed and extends with greater clarity and detail than you would expect from a big, fully waterproof driver. It stops short of being bright and it never harsh or edgy. There is just enough shimmer and glimmer to bring some excitement and life to your music, perfect for those intense workouts. Mids are balanced nicely with the other frequencies, if not a touch dry. I wouldn't say they're recessed at all, but they're not forward either. Guitars are presented with a nice crunch, and vocals are sweet and engaging. Bass digs deeps and focuses more on sub than mid-bass. This is excellent because it doesn't bleed into and interfere with their mids. Bass is snappy and has some quality punch and texture to it, and the sub-bass rumble is addictive.

Soundstage on the AS800AP is one of my favorite aspects. It is large, much larger than average, seeming to nip at the heels of my Dunu Titan 1. It provides an excellent feeling of depth and layering, but could improve slightly on instrument placement which I find a touch vague.

The AS800AP had proven itself as a mobile gaming and media consumption guru. They have the right amount of bass to allow for an engaging and exciting experience. Sound effects such as guns firing, engines reving, etc. are presented with some serious grunt and punch which is always appreciated.

While the AS800AP may not be the best for critical listening, given their intended audience and position as a sports earphone they handle themselves pretty darn well. 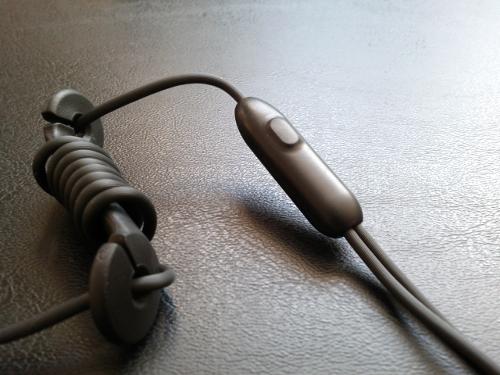 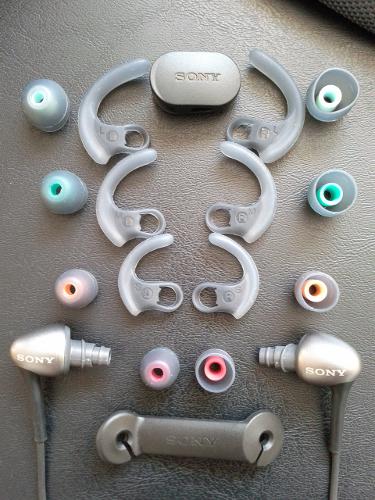 The AS800AP is still one of my favorite earphones to date, standing proudly alongside my other favorites like the Dunu Titan 1, JVC HA-FXH30, and EE846 DIY Hybrid. They bring to the table outstanding build quality, a generous accessories package and feature list, and surprisingly good sound. Even though I've been enjoying them for over a year and a half now, I'm still shocked at how good they really are, especially when you remember that they are fully waterproof.

If in the market for a top notch sports earphone that sacrifices nothing, except maybe an attractive design, the AS800AP should definitely be on your short-list.

B9Scrambler
I definitely paid way too much for them, haha. Don't regret it though. I bought them shortly after they started showing up in Canadian stores so price drops hadn't happened yet. I've seen them go for as low as 39.99 CAD recently.

KopaneDePooj
I don't care for IEMs, but nice lure!

Zelda
Nice review. Liked the fact of reviewing it after 1+ yr  of use!
Read more…