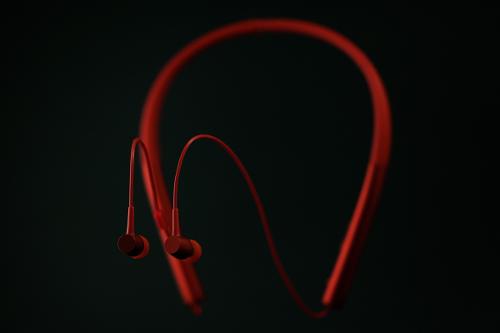 
The Latest In The h.ear Series​
The Sony h.ear in Wireless (sic) is a refreshing product from Sony in the realm of the general consumer audio market.  Like the h.ear on/ h.ear in, the h.ear in Wireless represents the latest in a vastly updated Sony product line.  Gone are the boring business professional designs from yesteryear.  Instead, welcome an eccentrically catchy design that features just enough “hip” colors to impress even your most judgmental high-school student. Cinnabar Red, anyone?

Capitalization and punctuation were the first casualties of this review.  The wordplay in the product name, while being incredibly striking and edgy, made it both difficult to read and edit properly.  Luckily, the ominous product number (MDR-EX750BT) made a return to rescue my inner Connor from an angry Robert Patrick (Microsoft spellcheck).  In the subsequent iterations of this review, “h.ear in Wireless” was edited out in favor of the clunky but grammatically sound “MDR-EX750BT”.  Apologies to those who were expecting an easy read.

In all seriousness though, I would like to thank Sony for helping to coordinate this review, and for putting up with my hectic and constantly changing schedule. The uniform professionalism of the team here has always impressed me, and it has been a pleasure reviewing the MDR-EX750BT. The usual review disclaimer follows below.

Disclaimer​
The MDR-EX750BT was provided by Sony for the purposes of this review.  I have now had it on loan for close to 3 weeks. I am neither a paid affiliate nor an employee of Sony. I do reserve the rights to this media, so do contact me if you wish to reproduce any part of the writing or photography seen here.  Review can also be found here on my site.

Opening up the fairly standard matte box reveals another nicely colored box with the headphones inside.  Sony is still a master of industrial product packaging, always striking a nice balance between economy, style, and practicality. Flipping open the front flap, one encounters the MDR-EX750BT encased within white blister packaging. Removing the blister package reveals the included accessories, which are listed below:


Overall, a fairly complete product package. The extra pair of large tips was certainly a well-considered move.  However, the one thing the MDR-EX750BT could have really used was a carrying case.  If the budget Beyerdynamic DTX-501P can come with a hard-shell EVA case, I don’t see the inherent difficulty in including one for the pricier and more delicate MDR-EX750BT.  Hard pouches are really a necessity for portable items, and it would be nice to see more manufacturers include these. 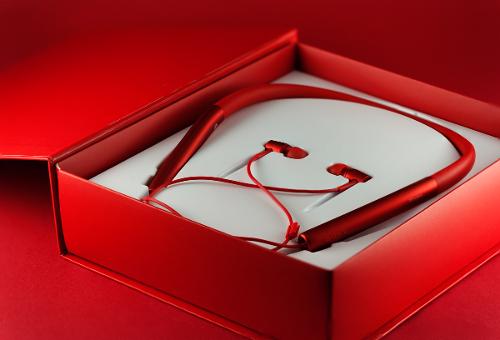 BUILD AND DESIGN​
​
​
Both the h.ear on headphones and h.ear in earphones were classy and elegant in an understated way.  The MDR-EX750BT is quite something else.  Primarily comprised of two components – a neckband and the earphones (or headphones, depending on how you choose to see it), the MDR-EX750BT is remarkably comfortable for static use. The neckband is covered in soft rubber at key contact points, while the rest is plastic painted in a metallic color of your choice. Two thin wires connect the two key components together. Overall, a little light in the hand, but quite comfortable.​
​
However, there are some practical concerns with the design.   There is no strain relief where the wire exits the neckband, so I suspect cabling issues may arise in the long-term.  The neckband is also unsuitable for active use (i.e. running) as it will bounce up and down uncomfortably on one’s collarbone.  And finally, we arrive at the elephant in the room.  The design itself.  It looks good in theory, but in terms of real life execution it just didn’t quite work out for me.  I had friends ask me if I was wearing a hairband (I’m a guy), and this did make use in social settings a bit awkward.  I feel like one could get away with the black version, but it simply doesn’t look particularly smart or wieldy.  However, it’ll be up to the individual to decide if this makes a good lifestyle accessory.​
​
A slight note on usage.  When turning on the headphones, hold the power button for about 10 seconds.  The initial flashing blue light is deceptive and doesn’t actually put the unit into the Bluetooth sync mode.  Just a heads up as this did cause me some problems until I was duly informed by the extremely patient Sony representative.  NFC connection can be done by putting a compatible device near the right stem.  Overall, a painless and intuitive system.  ​
​ 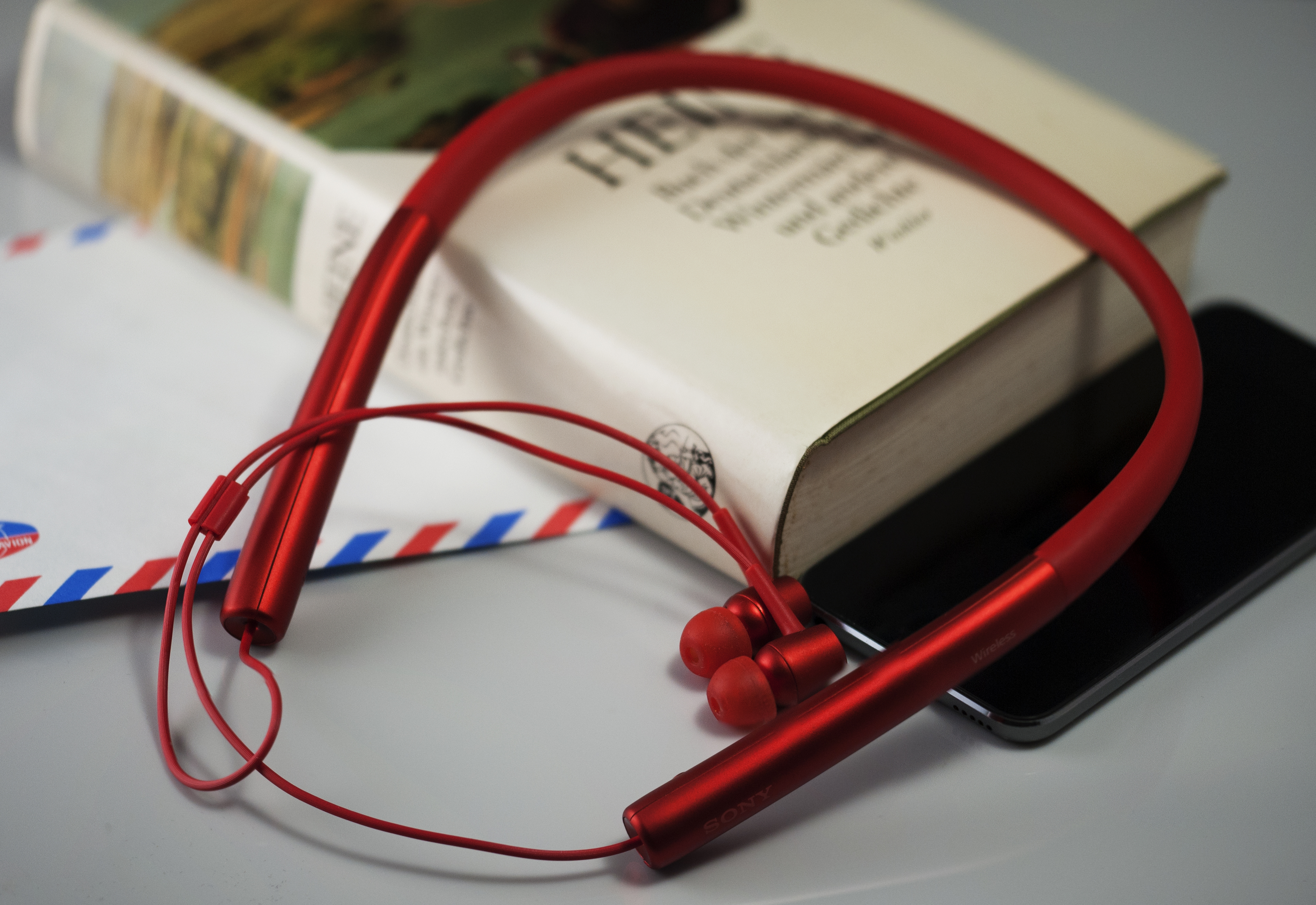 
At a Glance
The one word that I’d use for the MDR-EX750BT is safe.  Like the earlier MDR-ZX770BN that I reviewed close to a year ago, the MDR-EX750BT is tuned to be pleasing and mostly inoffensive. Which is good for general listening but otherwise discounts these headphones from being particularly high fidelity, or as Sony calls it, Hi-Res.  For this review, the basis for sonic references was the Etymotics Research ER4, which I use extensively.   I will address the wireless capabilities in much greater depth below, but it is overall very good.

LDAC/ Bluetooth
At the heart of the MDR-EX750BT is Sony’s relatively new LDAC Bluetooth Codec.  According to Sony, LDAC is capable of achieving bit-rates of up to 990 kbps (there are three transmission levels - 330, 660, 990).  Current SBC can only reach close to 328 kbps in “High Quality” mode, which gives the LDAC a 3-fold lead in terms of data streaming ability.  At the same time, Sony has also confirmed that it is possible to send 24-bit/96 kHz files losslessly via LDAC.  24/96 produces a bit rate of 4.608 mbps (sample rate x bit depth x channels), meaning that Sony has managed to achieve a lossless compression factor of about 4.65 x. This is extremely impressive, and has been a subject of discussion on some audio sources. Despite initial doubts regarding the numbers, Sony has confirmed that these specs are indeed valid. However, this vast advantage is immediately lost if the source device does not support the LDAC codec, which is definitely something to keep in mind when purchasing the MDR-EX750BT.  Make sure you have a LDAC-compatible device in order to harness the full advantage of the codec.

Throughout my time with the MDR-EX750BT, I didn’t suffer a single major dropout and the overall consistency of LDAC coverage was very good.  Battery life is also rated to be close to 7.5 hours, and I certainly didn’t have any problem with the MDR-EX750BT’s endurance while on the go. A slight quirk that I noticed was that when I used wired mode on my MacBook Air, the volume became fixed and was not adjustable.  Now some may be expecting a comment on whether the Bluetooth capabilities can match wired performance.  To put it simply, it’d be an unfair conclusion given the technical performance of the MDR-EX750BT.

So let's attempt to frame the sound

Soundstage And Imaging
The soundstage on the MDR-EX750BT is small.  I started out with the binaural recording of “When The Saints Go Marching In” as a shot in the dark to get a rough idea of the how the headphones would perform.  What I found was that both depth and width were fairly restricted on the MDR-EX750BT.  Instruments ended up sounding uniformly flat and muted in an attempt to recreate distance perception, and it just wasn't a very successful spatial rendering.  This sense of space was further restricted by the lack of separation between instruments.  Detail retrieval wasn’t great, but imaging came through mostly intact.  However, this positive only accentuated the previously mentioned concerns.

Bass
Bass on the MDR-EX750BT is prominent.  While casually browsing through the Outernational Sound by Thievery Corporation, there were many tracks where the mid-bass took center-stage, often at the expense of other components of sound.  While I do concede that the album is one of the more bass-heavy in my collection, I enjoy it because through proper equipment the complexity of composition and interesting bass lines can make for an atmospheric and exciting listening experience.  The MDR-EX750BT does create this exciting experience on occasion, but for the most part focuses its energies on plowing through tracks with its powerful bass. To that extent, the subbass on the MDR-EX750BT was mostly masked by the bloomy mid-bass, and didn’t extend particularly low either.  An artificial reverb from the mid-bass also leaked casually into the lower-midrange.  The resultant sound is a sometimes fun, but mostly tiring, extended listen.

Mids
The mid-range of the MDR-EX750BT was often covered by the bass, which is why I put the headphones through some older Bossa Nova tracks in an effort to uncover its singular performance.  On Águas de Março by Antonio Carlos Jobim with Elis Regina, I discovered that the MDR-EX750BT did indeed have some slightly sweet mids.  Unfortunately, it lacked body and was also rounded off at times.  The resultant mids can actually sound good, if it wasn’t for the striking sibilance that seemed to jump in all too frequently.  EQ’ing away the bass to emphasize the mids is thus not recommended for the MDR-EX750BT.

Highs
Highs are laid back. On the Antarctica soundtrack by Vangelis, I found that the twinkling synthesized tracks instead sounded flat and lacked texture or bite. In most cases, the upper registers rolled off quietly, instead of establishing a presence that would've helped contrast with the lower frequencies. It’s something of a missed opportunity.  Had the highs been given the same emphasis as the bass, a much more interesting, V-shaped signature could have been obtained, and would have in fact made the MDR-EX750BT a much more viable option for EDM and the like.

The MDR-EX750BT is a quirky earphone.  It’s got a striking design, for one.  Depending on how you intend on using, or more accurately, wearing it, the MDR-EX750BT may just fit in perfectly with the rest of your lifestyle accessories.  It’s also comfortable and convenient.  Rather importantly, the Bluetooth connectivity is great, with the LDAC codec being among the best currently available.  Sound however is only fair, and there were definitely aspects of the MDR-EX750BT’s sonic performance that could’ve been greatly improved.  If you’re looking for a pair of earphones with an easy listening signature, good comfort, and consistent Bluetooth capability, the MDR-EX750BT may be what you’re looking for. 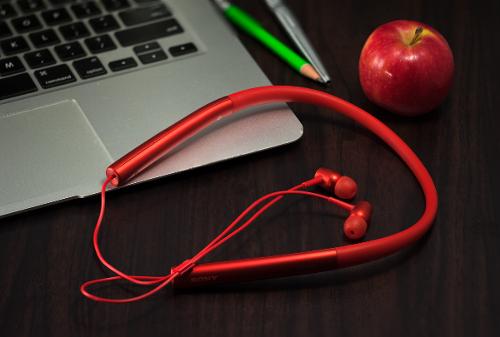 twister6
Is ldac only supported by Sony devices? If so, they are kind of shooting themselves in a foot with proprietary solution (doubt too many other companies will be paying to license it). Also, you mentioned wired mode?

thatonenoob
@twister6 the LDAC support is proprietary Sony I believe.  Currently it can only be found on their smartphones, home systems, and DAPs. I don't know if Sony is intending on making this available for other devices via licensing, but it is definitely a key component in their current ecosystem.  Also, the sheer performance of LDAC alone may make keeping it within the ecosystem entirely viable.  But this is just speculation on my part.  Wired mode is available by plugging the provided wire into the micro-usb charging port and the other end into a regular 3.5mm.  No noticeable differences.