Loading…
Pros: Great sound
Affordable balanced dac
Multi Inputs/output
Both RCA and XLR play audio
True Balanced
Cons: Remote is avg as so the Ir sensor
Only 3 feet on the bottom
It been a long while since I done a review, The SMSL SU-8 became interesting to me due to it’s balanced output and the fact it uses a pair of ES9038Q2M’s for it’s dac’s, meaning it is a true balanced dac where each dac sends out a mono signal, one for the left channel and the other for the right channel. Another thing is, the SU-8 is using a Xmos chip for it’s processor, the Xmos XU-200 chip. The device it self supports up to 32bit/768khz, while at the same time offering DSD support for 64-512. Fiber optic and coaxial on the rear do support DSD, but only through DOP and up to DSD 64 with 24bit/192khz as it max supported bit rate.

Inside the box it comes with a power cable which is a little short, I had to grab one of my longer cables, The other cable is the usb cable, which I found to be a tad short, but I still was able to use it.

The size of the SU-8 I would say on the small size, it fitted perfectly next to my jotunheim which is also on my desk. Many people these days don’t have a lot of room on there desk, so this being small is a good thing and a handy feature. At this current time, gray is the only color option, but luckly it matches my jotunheim as if the two goes together.

Lets talk about the input’s and outputs on the rear of the device. For starters, you have your USB input, Coaxial and Optical. For the output’s you have a pair of RCA’s for unbalanced and then a pair of XLR for balanced. Both output's on the SU-8 will play audio at the same time, so it's useful if you have two different devices plugged into the connections. 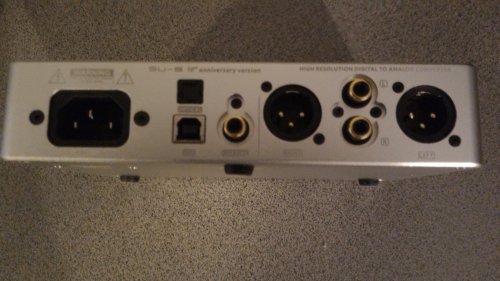 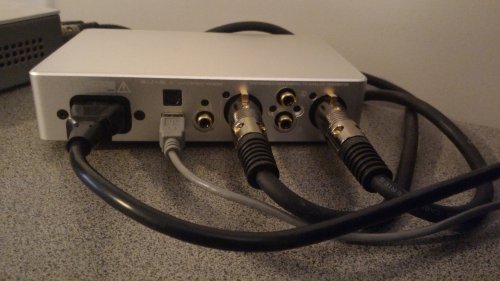 On the bottom of the SU-8 is w here the voltage selector is, which is important if your in the USA, as it comes set to 220v by default make sure to set it to 110v before use. But yea make sure to set right for your country, if you don’t you will have issues. Also on the bottom are the feet, there are only 3 of them, so the unit will tip if you place your hands on the edge of it. 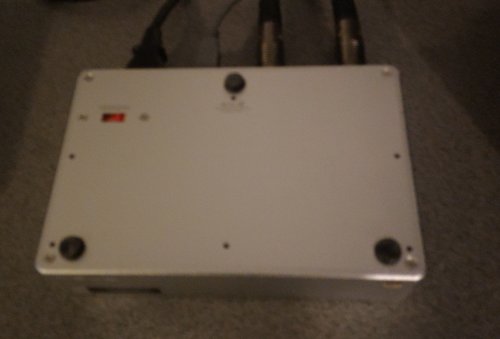 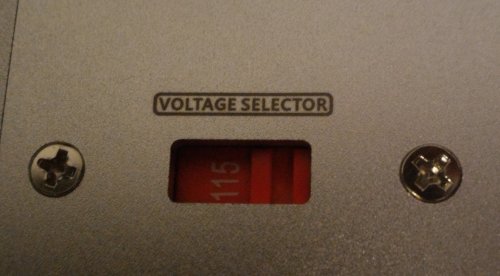 On the front of the SU-8 is the LCD screen, which shows different information. On the right side of the screen is the input selector button, which also doubles as the power button. Pressing it toggles between USB, optical and Coax, holding it down turns the device off and back on again. 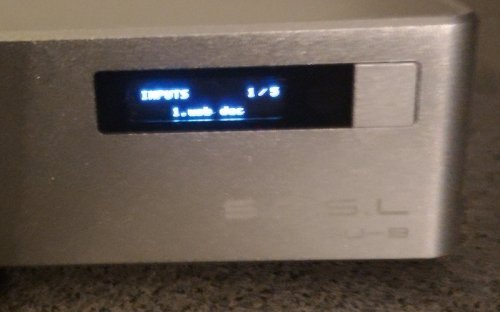 A remote did come with the SMSL SU-8 which has all of those functions and more, at first use make sure to press the C button on the remote, to put it into SU-8 mode. The B button is for the SH-8 amp, which means you can use the same remote for both devices if you have both of them. Remote is limited to distance and sight of the SU-8. It will work up to 26FT away, but the downside is the remote has to be in line sight of the IR receiver on the front of the SU-8, other wise it won’t work.

Continuing with the options. At the top left of the remote is the power button, on the right side is the mute button, so you can mute the audio playback.

Next is the direction arrows, up and down raise or lower the volume, or goes thru the menu, the circle is the menu which where the left and right arrows are used. The A button isn’t used and you have the B and C button which I already mentioned.

Pressing the menu button brings up the current input that is selected, hitting Left or Right changes the input. Pressing the menu button again change’s the menu to the PCM sound filter’s setting. Where you can change the frequency response. The options you have are Fast Linear, Slow Linear, Fast Minimum, Slow Minimum, Fast hybrid, Apodizing and brickwall. These setting changes the sound signature.

Also sorry for the blurry photos,my phone had a hard time getting it clear, regardless the bright settings on the SU-8 for the LCD

Next up you have the sound menu, here you can change the type of sound from the SU-8, the default setting is standard, which bypasses any processing. The processing options are Rich 1-3,Crystal 1-3 and Tube 1-3.

The next option is dimmer which either changes the display brighter or turns off the auto display. The brightness can be raised up to 4 which is the brightest.

Last and final option is the display mode, here you can configure it to show either the input that being used, the sampling rate that the song is playing at or the current volume setting.


Fast linear in PCM filter and Standard in Sound color is the default settings for the SU-8.

The player I will be using is J river media center with playback set to asio and bit match playback.

All of the songs listed are lossless, with no up sampling done. I picked these songs due to them letting me over all aspects of the SU-8 in this review.

Purple Rain by Prince. On Film by Abakus and Comeback by Falcon funk & Bossfight

When the songs starts, The piano and the drum kit comes thru clearly. There was no details lost. Even prince voice was clear and very well heard. All of the instruments was heard. The drum’s had the right sound to it, nothing was added to it beat as they was accurate.

Separation is great prince and his brand including instruments are not overlapping each other and can be heard a part from each other. As the song played, I didn’t hear any brightness at all and the details was perfected as the hit hats and snares came thru perfectly.

Sound image is great, I can locate the backup singers, instruments and prince his self. Including that woo that comes from the right of me as if its being said in a distance as it reverb to my right side. The sung feels out it’s outside my head, in fact I feel like they are around me singing with me in the middle, if that makes sense.

The instruments in this song as the same feeling from purple rain. What different in this song is it’s bass. There is different notes of bass in this song, All of them can be heard without any problems. Due to the separation being good in this song too. Like I said before, nothing is overlapping each other and is spaced apart.

While this one share similar with the others with how clear it is, The bass hits harder in this, while still being clean and clear. Feels like there is more of a spacious type of sound stage in this one. Even with all of the different instruments and sounds going on at the same time, including the vocals, it still separated with no over lapping at all.

In fact I can hear the distances even more in this song, with a Synthesizer directly in front of me, the bass and drum on my front right including the snares. As I’m sitting where the music producer is sitting. As the different reverts I hear spreads out thru the sound stage.

EDITED FEB 19 2019:
Quick update, I got the cables finally, I tried the JBL LSR 305’s directly with the SU-8 and the first thing I notice was that I notice was the details was a tiny bit less then the R70X but in a good way as it wasn’t as detailed as the R70X. It was tiny bit smoother.

When it came to the singing and the backup singers, it was just as clear and clean as it was, if as I was listening from my R70X’s instead of the JBL LSR 305s, that’s how close the two was. I still could hear each of the difference singer voices. Now there was one difference between the two, which was the LSR 305’s had more weight behind the singer voices, then the R70X.

On the other hand, the bass came off as being flat sounding, as it didn’t stand out. It was there as I heard it, it just wasn’t in the forefront of the sound. It had a some power behind it, it wasn’t at impactful.

I enjoyed the SMSL SU-8 a lot, I listen to a lot of songs since I receive it last week, everything sounds wonderful. It worked very well with the SU-8, In purple rain the snares was a bit too detailed, but I notice it was just purple rain as in the other songs the snares wasn’t too detailed and was purple. Still I didn’t hear any brightness in any of my songs. 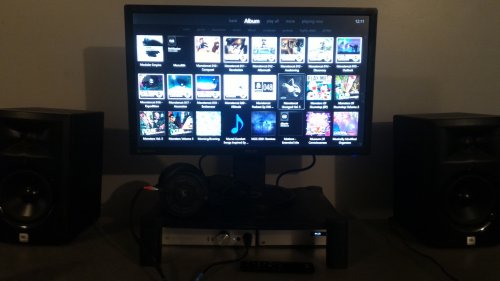 What I was also happy about is my games and movies, they both sound so good with the Su-8, I have no regrets with it as I find it to pair great with my Schiit jotunheim, even does a great job with my JBL LSR 305's too.

One minor issue that I have with the SU-8, is the fact that it doesn't have four even placed feet on it, but three, but that can be easily fixed with a 4th rubber foot.

Aside from the bass being a little lacking, I did love way the JBL LSR 305 sounded with my SU-8 in my music as well as games. I not saying that it has no bass, it does have it, but not enough of it. Luckily I do have a Sub-woofer laying around that I can use to remedy this.

genclaymore
Yep its the version 2, I made sure that it was before I bought it .

HenrikPW
Is there an option to have to have the display turn off automatically when the source/volume isn't being changed?
C
cen0byte
Hello there! I have the SU-8 connected to my mac mini via USB.
I also have Logitech Z500. I was wondering how can i connect the logitech speakers to my SU8
in order to bypass the z5500 crappy internal dac and use the SU-8 instead.

i plan to
connect the SU-8 from RCA output > adapter > 3,5mm cables to the 6channel input on the logitech console.