General
I was looking for a replacement for my Ibasso DX120 for my desk at home, since im now working at home more due to COVID-19. The DX120 is a pain to use in DAC mode, mostly because it uses the battery and refuses to charge at the same time. The fit and finish are great even if the flipping LCD screen is a little gimicky. I chose black and this iteration is with the AK4493 chip which adds the 6 filters.

The Filters
The filters provide no inconceivable difference with the 400i's to my ears. If we look at the frequency response for the 400i's there is a slight rolloff past 10K perhaps thats why. These filters effect the frequency response around and past 20K. In my opinion unless you are 10 years old, a bat or a dog you wont hear the difference either. One thing entering into the audiophile world i discovered is that you dont have to spend $1000s of dollars to get great sound. There are a ton of people that claim to hear a difference and i just not convinced, it gets to the point where a DAC is a DAC and a cable is a cable. On paper sure the performance is better, we are limited by our hearing though, which gets worse as we age. Many self proclaimed audiophiles are older...so i just never understand how they are claiming to hear differences.

The Sound
The sound is surprisingly airy and extended yet smooth and lush. When i first plugged the device in i was immediately impressed by its sound regardless of the price. Once i hooked up the A-B switch and compared it to my DX120 i was really blown away by the upgrade in sound despite both DAC's being very similar and technically the AK4495 in the DX120 is superior. The sound was more extended as if there was a fine veil lifted off revealing details, the DX120 sounded muffled and dark in comparison, heavily rolled off even. When i started to listen more i realized that this is not the DX120 i've come to know and love, something was wrong. After some light reading there is a documented issue which Ibasso never fixed for the USB XMOS function on the DX120. Perhaps this is because im using the windows drivers instead of installing the ibasso application. The fix was to run the player on the super slow filter roll off. Once i selected the filter on the DX120, both sounded exactly the same! To my ears i vigorously switched tracks while mashing the A-B button on my little bear and i just couldn't tell the difference. I suppose this is a good thing, after all i was looking for a replacement for my DX120 at the desktop since i loved its sound so much. It actually makes sense since both are very similar DAC's, i could be wrong but it would be easy to assume the AK4495 is better than the AK4493 or perhaps one is meant for portable and the other for desktop. Now in the past i've compared the DX120 to my Fiio X3ii with the CS4398 DAC, and i much preferred the DX120 for its natural and sibilant free sound. The fiio in comparison sounded artificial and overly sparkly/sibilant especially on cymbals. Since the DX120's DAC sounds identical to the Sanskrit S10 is safe to assume it sounds more natural than the CS4398 in the Fiio. I did manage to throw a quick comparison of my onboard audio in my motherboard in for kicks (realtek s1220a Crystal Sound 3). Compared to the motherboard also couldn't tell a difference with my A-B switcher, however i did not spend alot of time comparing the two as i did with the DX120, after all this was not the main purpose of this review.
Is it possible that onboard audio has gotten better over the years? Ill start by saying the biggest reason why onboard audio is not preferred is because of the introduction of noise. Well here are a few reasons as to why i think my onboard sounds really good and does not appear to have any noise

-My motherboard is high end and has implemented EMI audio shielding with high end capacitors in both the audio
-Im used the line out with my little dot plugged directly into the motherboard
-I built a mini isolation transformer to safely eliminate the ground prong from the little dot. Since the little dot uses a class A amp they are notorious for picking up noise and ground loops.
-I was not running any processor intensive applications or games which possibly could introduce noise. Typically i write off onboard audio, but perhaps i shouldn't be.
-i only have a m.2 drive, no traditional hard drives. I would imagine the strong magnets in traditional hard drives are the most likely to introduce noise.


Conclusion
There was an issue with this unit which was apparently solved in the new iteration i have here, the issue was related to jitter and the signal to noise ratio or something to that degree. In any case the issue was that the USB from the computer was not powerful enough to run the DAC. I jumped ahead and decided just to rule out any issues and plugged it directly into the USB from my motherboard and ran a second USB cable to a 5V power supply. If you were running this off a laptop with just the USB, i could see that being an issue especially with an older laptop the power may not be adequate. I never tested this directly off a USB port, plus if i did its likely to work since i have the newest USB ports on my computer as it is. If you have a nice motherboard you might be able to save a few bucks with just a headphone amp provided there is no noise. You may be surprised by the fact that you may not be upgrading your sound at all and just spending money for no reason. Audio can only improve so much and i personally believe we have reached that point already, unless if course we can somehow improve our limited hearing. In any case it just means that you can have a high end DAC for a fraction of the price 10 or 20 years ago. This little DAC sounds natural and transparent and if you are looking for a high end DAC there is no reason why you need to spend large amounts of money when this little guy sounds great. With all the money saved you are far better off dumping it on an amp or better yet a nice pair of headphones than trying to find a better sounding DAC than this one.
Last edited: Sep 10, 2020
Pros: Great functionality. Sound is clear and open. Bass is pleasantly weighty.
Cons: Nothing if you add auxiliary power supply to it.
I've been exited to hear my first DAC with AK chip so I ordered this little guy as soon as I saw it on sale, without reading any reviews. But let's start from the beginning - built quality is nice, to me it looks better in real life than it does on pictures. Remote control is made of cheap plastic but it looks nice and I like it anyway. With it you can turn DAC on/off, change inputs and control volume, really like this. Here are some images: 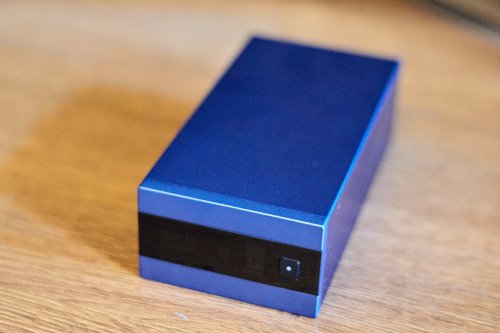 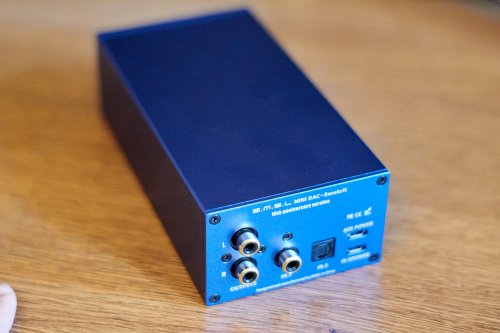 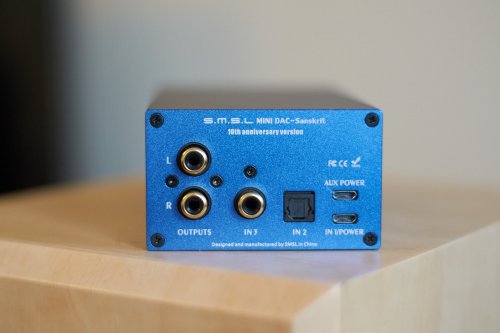 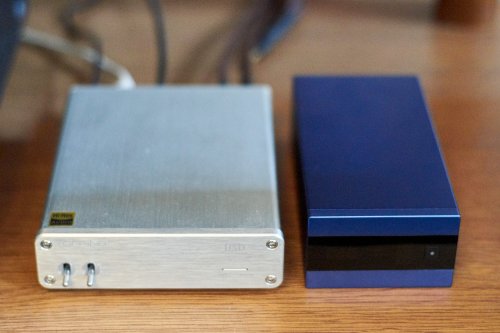 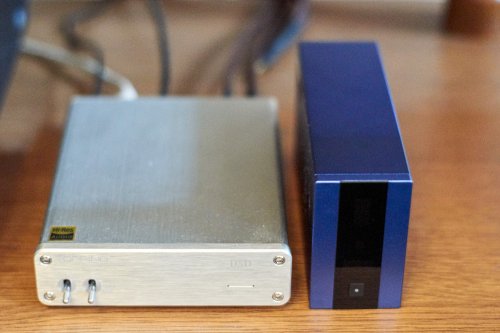 ORIGINAL OPINION WHEN POWERED ONLY FROM PC: In my opinion overall sound quality (level of details, width and depth of sound-stage) is similar to SMSL Idea /Sabaj Da2 but Sanskirt 10th has a bit different sound signature. It has kind of thicker warmer bass and brighter higher frequencies. Mids are fine, prominent enough and detailed but vocals can sound sibilant sometimes in my system which doesn't happen with Topping D10 and D30, SMSL Idea/Sabaj Da2, Da3... For the same amount of money Topping D10 is sonically better balanced device in my opinion.

EDITED OPINION AFTER TRYING IT WITH AUXILIARY POWER SUPPLY: After seeing measurements on AudioScienceReview that showed the unit is performing much better with auxiliary power supply, I revisited this DAC and gave it another spin connected to a phone charger to see if I can notice any difference. Well, the difference is actually very clear, now it has more punch in the bass, improved dynamics and cleaner sound overall. It sounds fuller and cleaner than SMSL Idea, Sabaj Da2 and Da3. Now this is a fair competitor to the Topping D10 in this price range, and deserves high praise.

CONCLUSION: It started like the least favorite DAC I tried but now with added power and new-found liveliness in the sound I actually like it and consider it one of the best sub $100 offerings. It's a very sweet mix of good functionality and decent sound.

I also made a video review if anybody is interested (original one):


and the follow-up after trying it with aux power supply: