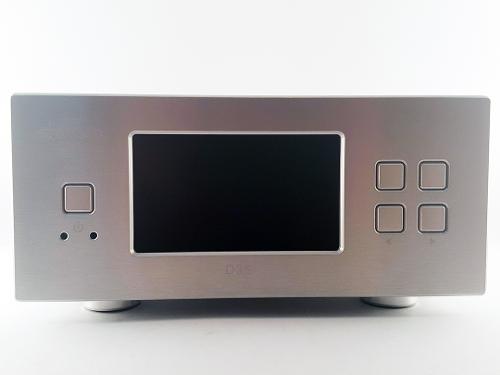 
Founded in 2014 in Guangzhou, China, Shinrico is a company focused on digital electronic products in the field of high-tech enterprises. Today I'll be looking at the Shinrico D3S Digital Turntable (transport). The D3S can be found on AliExpress for around $619 at the time of review.

This unit was sent to me for the purpose of this review. I'm not affiliated with the company in any way and all opinions and observations are my own, based on my experience with the product. I'd like to thank Shinrico and Ann for the opportunity to test the Shinrico D3S.

4. Support 32bit 192k digital output, with digital coaxial and digital optical output, it can be used as a digital turntable, connect the decoding device.

The D3S came in an unassuming brown box. Inside we found the D3S player, securely packed in soft white foam, a power cable, remote control and an 8GB SD card (containing the user manual). 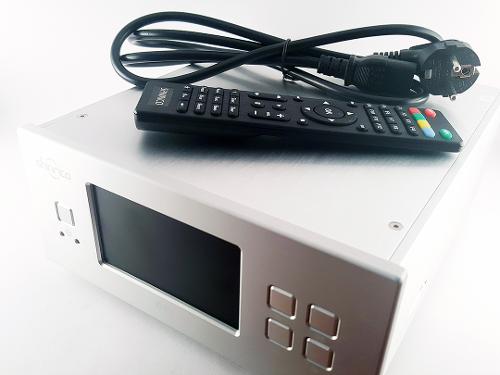 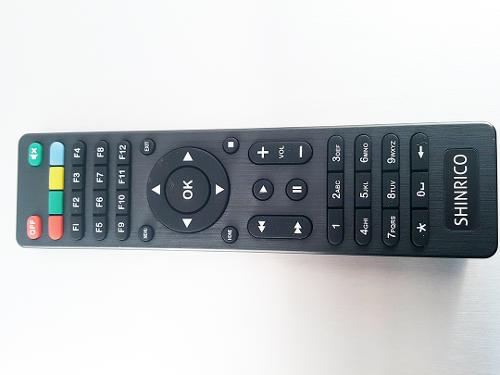 Build-wise the D3S is simple but elegant in its appearance. It comes in black or silver colors and I obviously have the silver/white version. The case is made from very solid feeling aluminium that doesn't bend or move when pressure is applied. The underside has 4 plastic feet attached which raises the unit slightly off the surface. The surface feels nice and smooth and there are no sharp edges to be found. 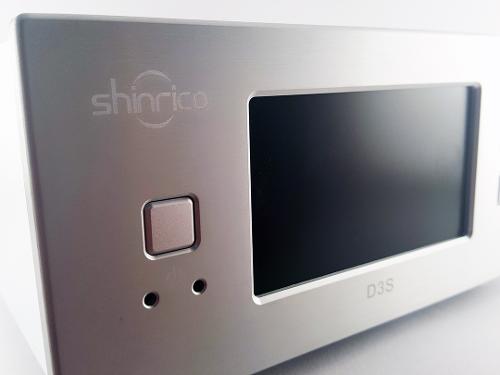 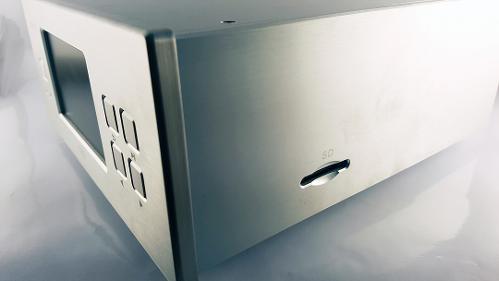 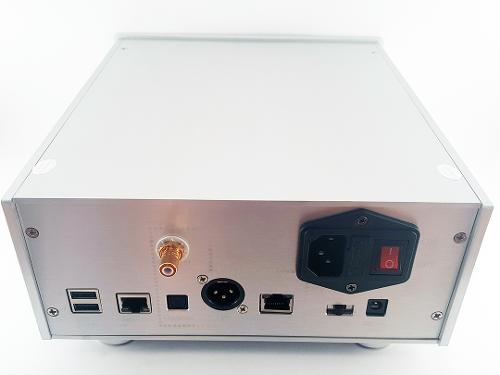 On the front panel (from left to right) is the Power button, underneath which are an LED power indicator and IR receiver. Next to that is a lovely 4.3-inch LCD screen and on the right side is a cluster of 4 buttons which are (clockwise from top-left):


On the right side of the box, towards the front is a SD card slot
At the back panel are (from left to right):

Operation of the D3S is a simple affair. To turn on the unit simply press the power button for 2 seconds and the same to power off. Upon startup we first see the Shinrico logo and then we're greeted with a welcome screen. Boot time is about 25-30 seconds. Now let's take a look at the menu settings. 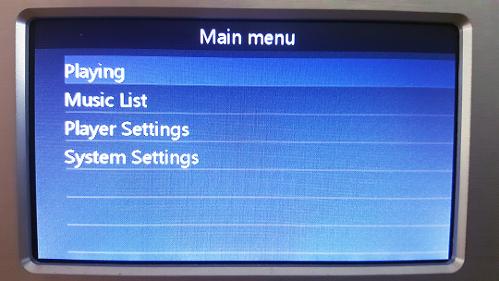 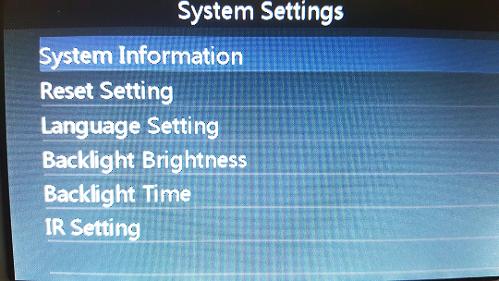 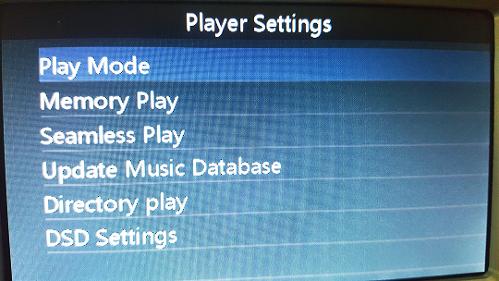 *It's worthy to note that "Update music database" only works when using a SD card. According to the manufacturer the reason for this is that it's common for users to have 1-2 terabytes of files on USB devices (external hard drives etc) and automatic updating of the database is too slow.

The 4.3-inch LCD screen is crisp and clear with rich color. It stays completely cool to the touch even after hours of use (as does the unit itself). Navigation is simple using the remote or the buttons on the face of the unit and the UI is snappy and intuitive with no apparent input lag. Album art is supported and covers look vivid and clear with track and file information shown next to it on the right. 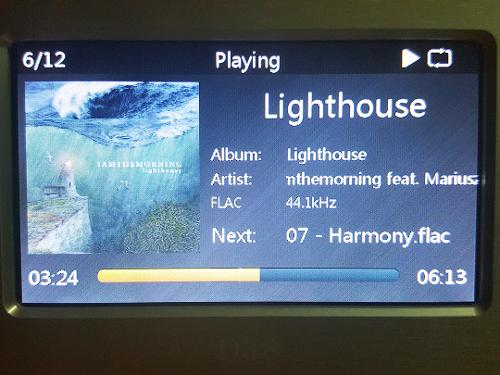 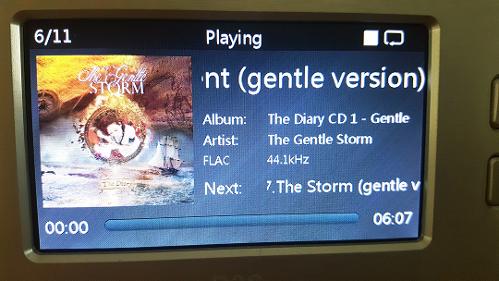 The D3S supports a large variety of file formats so you should be able to play almost anything on the device. There's no internal storage so you'll need to use a SD card, USB flash drive or external hard drive to hold your music library. There's also no on-board converter so you'll need a DAC in order to get sound from the unit. During testing I used the optical and coaxial outputs, feeding to the Arcam irDAC-II or Micca OriGen+ and from there to earphones, headphones or amplifier. 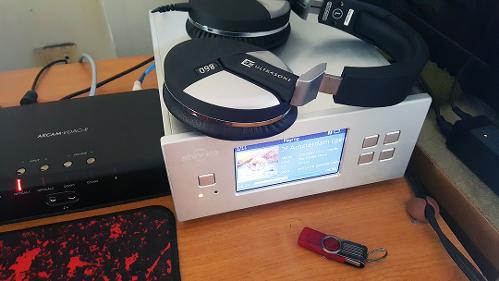 Problems and suggestions for improvement:
There's just one problem I found with the D3S but hopefully it will be fixed in a future firmware upgrade. When seamless/gapless playback is enabled music would stutter badly at the end and beginning of tracks. Fortunately, upon disabling seamless playback the stuttering disappeared completely. Shinrico assures me that the engineers are working on a solution.

For improvement, I would like to see an option to manually update the music database for USB drives as in its current state the D3S only supports this feature with SD cards. I'm not sure if boot time could be improved but that would also be a welcome change. The final thing I'd like to see changed is the white text (on the silver unit only) as it's very hard to see against the silver/white case and I think black would have been the better choice here. 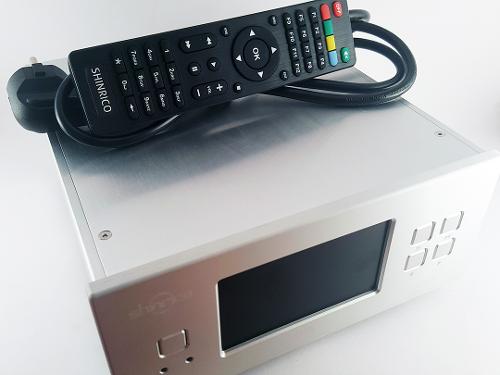 I've really enjoyed my time with the Shinrico D3S. It does what it's supposed to do and does it well. It's aesthetically appealing, well built and looks professional. The LCD screen is really nice and gives you all the information you need with good color and clear text. It supports a large number of file formats and the casing stays completely cool at all times, as does the screen. There is a decent amount of output options that should meet your needs and the remote is a very handy addition.

Should you get one? Well that depends. If you don't like computers then this would be a good alternative. It's also handy to keep next to your HiFi system and has a smaller footprint than most laptops. Computers often run into problems or have background electrical noise or you might just want to free up resources so you can utilize your computer for gaming or other tasks. You could think of it like a CD player but one that can  potentially hold hundreds of albums via an external drive of NAS server. If that sounds useful to you then I can definitely recommend the D3S.
Reactions: B9Scrambler and HiFiChris
View previous replies…

crabdog
@HiFiChris that's interesting about the gapless. Have you tried non-gapless albums/directories with it enabled? IIRC I played a gapless album and it worked perfectly but for others the stuttering was consistent. I'll have to try it again when I get home - I'll play a gapless album and see what happens just for confirmation.

Nothing like that at all - I've used it for a couple of hours already and am even using it in the very moment I'm writing these lines. Might it probably have something to do with your storage medium? I'm using a Samsung MZ-7TE1T0BW Serie 840 EVO Basic 1 TB SSD (should be exFAT) in a 2.5" CSL Computer S-ATA USB 3.0 enclosure.

crabdog
@HiFiChris seems to happen with all my storage - External HDD, SD cards etc. It looks like the SDH5 is several iteration ahead in terms of firmware so that might explain it. Supposedly the engineers have been informed and are working on a fix.