Shanling Audio has done some good stuff when it comes to DAC/Headphone Amp combos, both portable and desktop. Their BA1 Bluetooth Desktop DAC Amp scored high marks when we reviewed it earlier this year, providing a nice balanced sound for both headphones and hi-fi.

They also have the $45 UA1 portable DAC/Amp, a budget audiophile favorite due to its clean, detailed sound and relatively robust amp section.

Both of those are built around the ESS ES9218P combo Dac/Amplifier chip, but today we’re looking at the new step-up from the UA1, the $85 Shanling UA2 DAC/Amp combo. It has an ES9038Q2M ESS DAC Chip (which decodes DSD512 and PCM up to 32/768) along with a separate Ricore RT6863 chip to handle amplification.


It also has a 2.5 Balanced output along with the 3.5mm single-ended jack and a detachable USB-C cable which adds some flexibility. When you plug into the balanced jack, you get 195mw of juice into 32 ohms, making it one of the most potent DAC amps out there, especially under $100.

If you don’t care about MQA, the UA2 will give you an excellent crisp, balanced sound that will work with all but the most power-hungry headphones, especially if you plug into the balanced jack. It also works well with iPhones due to its USB-C jack, which lets you swap in a lighting cable.

Disclaimer: The Shanling UA2 was sent to us by Shanling in exchange for our honest review. It doesn’t have to be returned once the review is complete.

The Shanling UA2 DAC Amp is yet another stick-type DAC Headphone/Amp with a USB connection on one end and a 3.5mm jack on the other end for your headphones or IEMS. It also gets its power from your phone or laptop and bypasses the likely inferior DAC in your device.

However, where the UA2 DAC differs from other DAC Amps is with its detachable USB-C cable, which plugs into a USB-C connector on the end of the DAC. This allows you to swap out the included cable with a USB-C to lightning cable (sold separately) for your iPhone.

The UA2 also sets itself apart with an additional 2.5mm balanced output, almost unheard of at this price point. I personally only know of two other sub-$99 devices with this feature.

I like the look and feel of this DAC. The slim bar shape looks slick and fits nicely in hand, plus the all-metal casing looks built to last.

On one side, you have the two headphone jacks, both balanced and single-ended, along with a tiny led that indicates the PCM sample rate/DSD output, and on the other side, there’s a female USB-C connector for the detachable USB cable.

I like that the LED has five different colors to differentiate the PCM sample rates, which gives a more accurate gauge of the conversion taking place. This contrasts with other DAC/Amps that only provide two or three different indications for the whole range of sample rates. 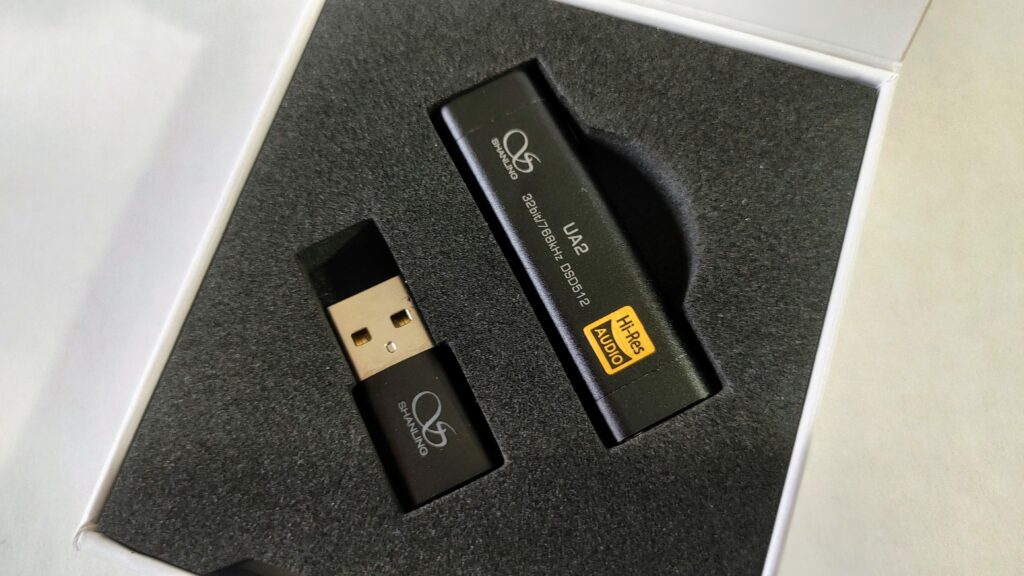 On the right side of the UA2, there’s a little button marked “Mode” that allows you to connect it to portable game consoles like the Nintendo Switch.

I’m not too familiar with this protocol, but from my understanding, if you hold it down while connecting it to the Switch, it will allow you to make a USB-C connection that works with the device. Then you can get better sound when gaming.

In the box, along with the DAC/Amp unit and the short USB-C to USB-C cable, you also get a USB-C to USB-A adapter so you can connect the UA2 to a laptop.

Inside of the UA2, you get a DAC section based around the well-respected ESS ES9218P Dac chip; a chip used to significant effect in the Khadas Tone2 Pro, another DAC/Amp we recently reviewed.

That 195mW spec puts the UA2 in about the top third of portable DAC/Amp units, and it drove my Hifiman SUNDARA with absolutely no problem, bringing them to a comfortable listening level at about a quarter volume. 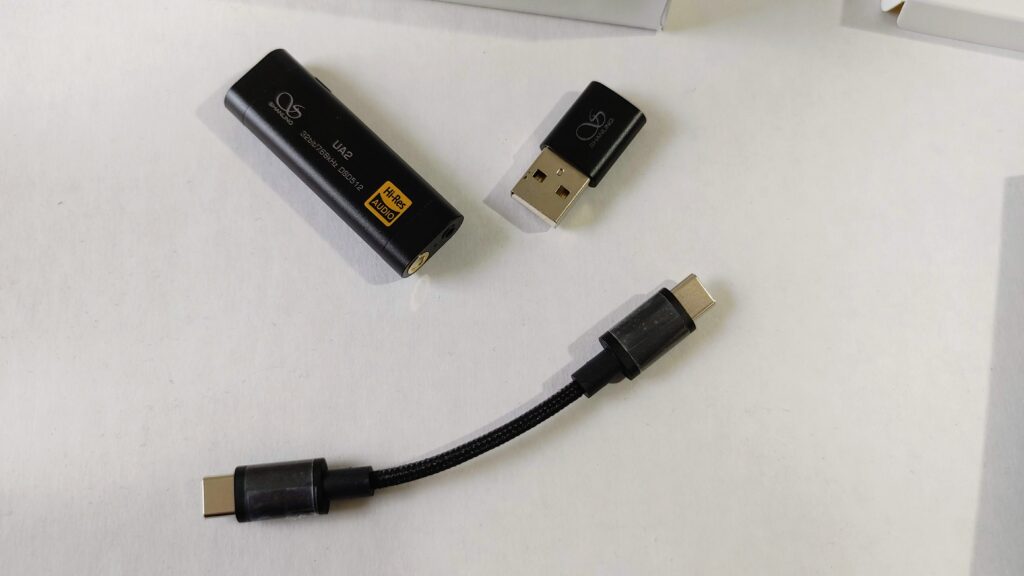 Even the single-ended jack had some decent muscle, driving my Mr. Speakers (Now Dan Clark Audio) AEON Flow Closed headphones to a pleasant listening level at about 50% volume, albeit with some constricted dynamics.

Like the UA1 and BA1, Shanling provides some additional adjustment of the UA2 with an app. It’s called the Eddict player, and it will let you change the gain or the digital filter. Unfortunately, this is only available for Android devices (sorry, Apple folks).

I liked the way UA2 sounded out of the box, so I didn’t mess around too much with these settings, but they are nice options to have. Especially if you like to tweak things or you have a very sensitive set of IEMs.

Funny enough, you can also use the Eddict app to play music stored on your phone, but not through the Shanling DAC. At least it didn’t work on my Moto G Power (2020) phone I use for testing.

For my listening tests, I connected the UA2 up to both my Moto G Power Android phone and my iPhone XR using a short USB-C to Lightning cable in place of the included USB-C to USB-C cable.

I also connected it to my HP Envy X360 laptop using the included USB-C cable and USB-A adapter.

For most of my testing, I streamed Hi-Res music from Qobuz (30-day free trial), using a pair of $349 Hifiman SUNDARA headphones.

The UA2 connected quickly to all devices, even the iPhone XR using an aftermarket lighting cable from Shanling.

As I said earlier, on either the Single-Ended or Balanced output, the UA2 had no problem driving the SUNDARA to its full potential, producing excellent macro and microdynamics. If I had to sum up the UA2’s sound with one word, it would be “rich.”

As I initially listened using the single-ended connection, I found the top end quite smooth and refined, which was nice to hear from such an inexpensive DAC. I’ve heard way too many budget dacs that accentuate the highs way too much in the name of producing “detail.” 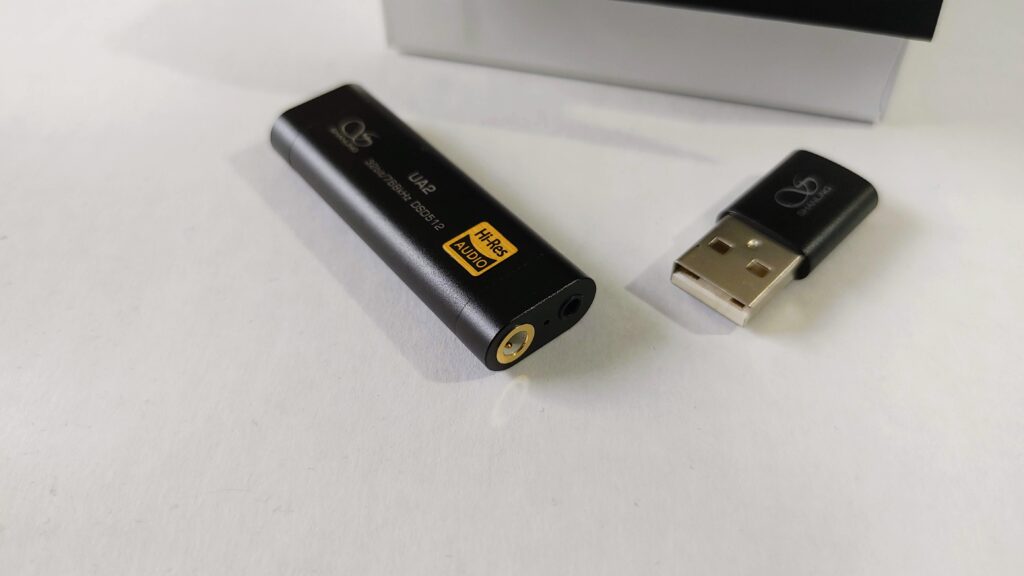 This is especially true with lesser implementations of the ESS DAC chips.

It was nice to hear that wasn’t the case here, as the UA2’s detail was present without excessive sparkle. There was a slight roll-off at the very top, but it impacted air very little, which was good. If you like a super lively sound up top, then you may consider the UA2 a little dark sounding. I didn’t.

On the contrary, I think the UA2 did a great job of smoothing out the rough edges sometimes present on the SUNDARA without dulling the sound too much.

Throughout the midrange, vocals and instruments sounded quite natural in texture, and the bass presentation through the Hifiman headphones was tight and articulate, faithfully bringing across Christian McBride’s upright bass on “Blues Connotation” from his new project “The Q Sessions.” His instrument punctuated and drove the performance as it should have due to the UA2 doing such a great job of resolving his string work.

As far as depth and separation are concerned, I was astonished at well this $85 unit separated the elements of the mix, putting the drum, bass, and horn in their own little “bubbles.” The depth was good for the price, but better layering can be had at higher price points.

That said, you would probably have to spend double the price to get a vast improvement. 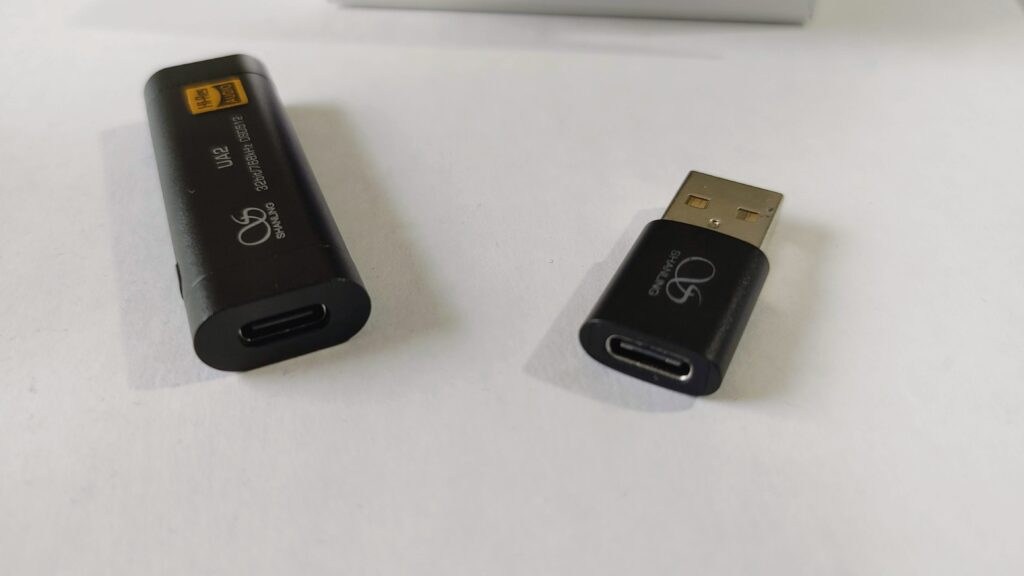 Moving over to the balanced output, the separation got even better, and the depth was more apparent as well, but still not to the level of a more expensive DAC/Amp combo.

What really astonished me when listening from the balanced output was how much better this little DAC resolved the characteristics of the different instruments. The separation was also much more pronounced.

On the balanced output, all the instruments were fleshed out amazingly well, even when they played simultaneously. You could hear exactly what the horn, bass, and drum were doing at all times, which is remarkable for such a cheap device. Many sub $100 DACs will mash the more intricate parts of the mix together, but not so with the UA2.

That said, if you really concentrated on it, you could hear that the highest notes of instruments, especially the horns, were a little truncated, but not to the point of distraction.

Comparison with the Shanling UA1​

Just for kicks, I decided to make a quick comparison with the UA1, the USB DAC Amp the UA2 now sits above in the Shanling line-up. The UA1 is about half the price of the UA2, only produces about half the power, and doesn’t have the detachable cable or Balanced output of the UA2.

The UA1 was a little more lively on the top and bottom when compared to the UA2, which some may prefer. The UA1’s extra sparkle and rumble did provide a little extra excitement to the mix. However, I personally felt this came at the expense of a little refinement.

That said, the UA1 is really good for a $45 DAC Amp, and I would recommend it to anyone looking for an inexpensive companion to the SUNDARA. If you’re really sensitive to edginess up top or want a little more separation, I would spend a little more and get the balanced output on the UA2. 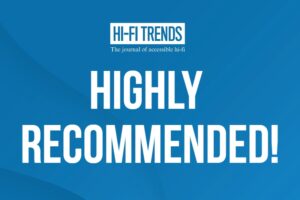 If you don’t care about MQA, and you have a pair of headphones that you can run balanced, the Shanling Audio UA2 is a top-flight DAC Amp Combo, available for a song. Highly Recommended!!

Loukasss
Hi, great review. Thanks to that i decided and bought the UA2. It’s incredible. The only thing i wanted to know is: Where can i buy the Lighting cable to connect the dac to my Iphone. Thanks for all. See ya