Pros: Well Built, Great Price, Long Cable, Great Sound Stage
Cons: Lacks punch, sound is not colored enough
These were my first headphones that got me interested in listening to music at a higher level. The sound stage is impressive, headphones are tough and well built. Extremely comfortable with nice and easy adjustments. Great intro headphone into the world of sound. They sell new for under $100 now, definitely recommend, one of the best open ear headphones in this price bracket. Also, the bass is more present in these then the HD598.
Reactions: maxpain12
Pros: Sound, Comfort, price, open back
Cons: kind of creaky, doesn't fold
-Sound: Compared to my Bose QC35, and V-Moda LP2, these definitely have more depth, which isn't surprising considering they're open back. I've also found the sound to be quite nice. I'd go so far as to say they're much better than my previous favorite, the Beyerdynamic DT880 since they're much warmer, and because of that, less fatiguing.

-Comfort: I often give comfort priority over sound because I can get used to how headphones sound, given they're not complete garbage, and more than not, a unique sound signature adds to the music I listen to, depending on the case of course. These headphones are incredibly comfortable in both sound signature and fit. I have a normal sized head and, while they do clamp down a bit tightly, something that isn't very necessary considering their light weight, the earpads and construction of the earcups make it easy to wear them for hours on end.

-Open back: Spacial awareness while gaming is on point.


-build quality: for the most part, they're plastic, but well constructed. Not as creaky as a lot of headphones, but they're not the most luxurious headphones either. Overall, they're built well enough and seem durable enough to stand up to years of use.

-portability: Lastly, These headphones don't fold. In my case, I use these with my laptop and often need to take them places. Because of the lack of folding mechanism and/or case, they're not the easiest things to cram into a bag. Folding flat would be a welcome feature.

-other thoughts: the cable is very long and not coiled which is either good or bad and depends on your use case. One thing I find annoying is that my pair came with a cable that terminated in a 1/4" plug. Since I'm using this with a laptop, a 3.5mm plug would've been better. They do include a 1/4" to 3.5mm adapter, but it'd unbelievably bulky. Luckily I had a short 3.5mm male to female extension to take some strain off the adapter. Just something to think about before buying.

The cable is indeed removable and locks into place so there's no worry about it coming unplugged and if it were to get damaged, you don't need to buy another set of headphones.
Pros: Relaxed musical signature, earpad comfort, imaging
Cons: Hard clamp, bad 1/4"-1/8" adapter design
About Me:
I'm just your average guy making his way through college with a passing interest in audio fidelity. I'm NOT an audiophile, but I've got a little experience ranging from lower-end products to flagship designs. I don’t make professional reviews and by my own account, I’m not much good at describing what I hear either. But I’ll do my best and we'll just have to see how that goes.

Introduction:
The Sennheiser HD558 is a full-size open dynamic driver headphone. It has been on the market for several years now, proving itself to be a very capable set of headphones for a reasonable price. Sennheiser has been in the headphone game for a very long time and while it’s very well known for mid-fi offerings like the HD600/650 and flagship HD800, the HD5x8 line is the most recent iteration of their affordable open headphone design. 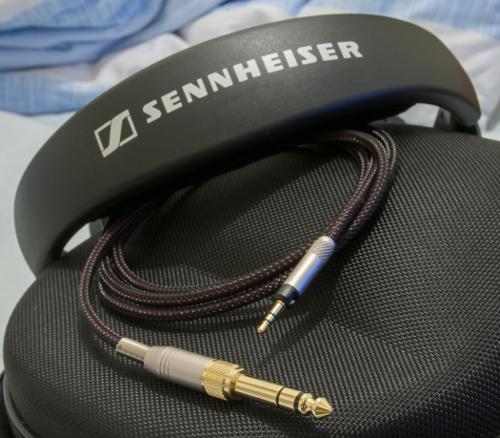 Disclaimer:
I’m not the most eloquent or well versed in describing what I hear, so take my words with a grain of salt. Also keep in mind that everyone hears differently; it’s not bad, it’s not wrong, it’s just different.
I bought this HD558 over 3 years ago and it’s served me well.
For this review, the HD558 is connected to a Firestone Audio FUBAR IV Plus, using USB input from a Macbook Air supplying lossless and .mp3 audio files.

Packaging and Accessories:
The packaging for these “lower-end” Sennheiser headphones is really nothing special. Honestly, it feels quite cheap. A cardboard box with clear cutout to show off the headphone, the removable 3m cable, and a 1/4” to 3.5mm adapter are all you get from the box. No padding, no felt, no carrying case/bag; the presentation felt as cheaply Spartan as could be. It’s a stark contrast to the nice acoustic foam padded cases for the HD600 series and up.

Build Quality and Comfort:
Let’s start off with the build quality. For a set of headphones that costs $120 (when I bought them), they don’t really stand out in any way in terms of build. When I got them, it felt sort of cheap, but now I recognize that it’s almost par for the course. The entire headphone is constructed of plastic; the outer headband shell is plastic, the cups are plastic, and the inner adjustment band is plastic. It’s all made of this solid, but cheap feeling, scratchy lightweight plastic. The adjustment band clicks for adjustment, but no indicators of any sort how many clicks you’ve gone, though it is of a good fine scale. The cable: I’ve got some nitpicks with the cable Sennheiser includes as well as the adapter. The cable is 3 meters long and it’s pretty well relieved, terminating in a standard 1/4” jack. It’s a little rubbery and springy, but not too bad and of appropriate thickness in my book. That concludes the good/okay parts of the cable. Firstly, it’s 3 meters long and while some people like that length, I find it way too long for my desktop use; that’s just for my personal use, I recognize some people like that length but I’m just not one of them. Secondly, the cable is removable, but it’s a proprietary 2.5mm twist-lock connector. In a consumer budget-friendly headphone, what’s the problem with using a 3.5mm stereo connector? Why use a twist-lock 2.5mm stereo connector? Then there’s the adapter Sennheiser supplies with the cable for those who need to plug into a 3.5mm jack. They give you an adapter that essentially creates a 5-inch mass sticking out and hanging onto dear life by the 3.5mm connection plugged into your device (amp, phone, etc.). The reason this pissed me off was because Sennheiser itself makes a better adapter that it could’ve packaged with the HD558. The sleeved cable you see in the pictures is the aftermarket cable I bought, which includes a screw-on 1/4" adapter.

On to comfort. Sennheiser usually scores very high marks here in my book. Well, at least the higher-end models do. I’m afraid I can’t be as generous to the HD558 in this regard, though it’s not to say everything’s bad news. The headband uses a single large velour pad for where it contacts your head for even weight dispersal and the earpads use the same soft velour. The earcups are adequately large for my ears, but more importantly, they’re oval shaped! Manufacturers really need to realize that human ears are not circular. The problem with these is the clamping force; there’s a lot of it and you feel that pressure the moment you put them on. This clamping pressure is also a noted trait of the HD600/650 line, but those headphones have a metal adjustment band, which can be stretched and bent appropriately to fix the clamping pressure. No such luck with the HD558; the plastic adjustment band has stayed in the same rigid shape since day one. 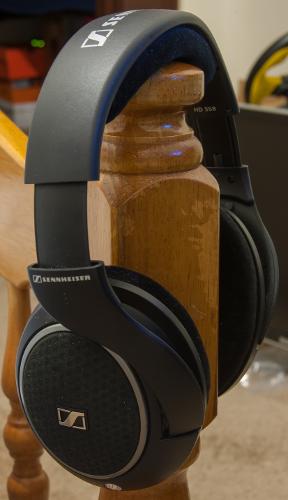 Sound Quality:
Let’s be honest, this section is gonna be kind of a mess. I’m not able to describe sound very well and what I can describe is only going to make sense if your mental references of all the terms are similar to what I’ve got going on in my head. Nevertheless, let’s give it a shot anyway.

To my ears, the overall sound signature of the HD558 could be described as tonally warm with a slightly mid-forward sound. This sounds like a baby HD600 and at $120, that’s a very good thing. It’s overall laid-back in terms of speed, but the notes feel accurate and cohesive. This versatility helps it be great at most genres.
Sound stage is pretty average for an open headphone but the imaging ability makes for good placement of sounds.
Treble is very relaxed; I wouldn’t say it’s recessed, but it’s polite and non-intrusive resulting in a fatigue-free listening experience.
As said earlier, I feel this headphone has a slightly mid-forward signature and the quality is up to snuff as well. Instruments have the right ring and musicality and vocals are clear and have nice warmth and body.
The bass is there, but like most open headphones, is lacking in weight and impact. For my tastes, there’s enough quantity and quality is good. Bass response feels relatively tight, though it’s still at little fuzzy at times. The problem it encounters, which I feel many open headphones do as well, is the lower the frequency, the less accurate and resolving it becomes. It stays quite cohesive in the mid-bass area, but gets looser the lower you go and can’t extend into those lower frequencies as well as high-end open headphones. For example, its bigger brother the HD600 does better. Because of this and its bass-light nature (compared to closed headphones), the HD558 doesn’t deal weighted blows and some music, EDM especially, loses a little bit of energy due to the lack of punch.

Conclusion:
The HD558 is an older headphone now at this point, but for today’s asking price ($100 on Amazon at the time of this review), it’s still a very good headphone. The plastics might feel a little cheap, but they’re sturdy and the pads that contact your head are all very comfortably padded with velour. Overall, I enjoyed the slightly thicker mid body complementing a relatively neutral (with a warm tilt) sound signature. Several years ago, this was the first full-sized headphone that I bought with my own money.  I had hoped that it would be an incredibly good headphone and after several years and even a few upgrades along the way, I’ve come to the conclusion that the HD558 has lived up exactly to my expectations. It is indeed a very good headphone.
Reactions: maxpain12, trellus and Hawaiibadboy
Read more…