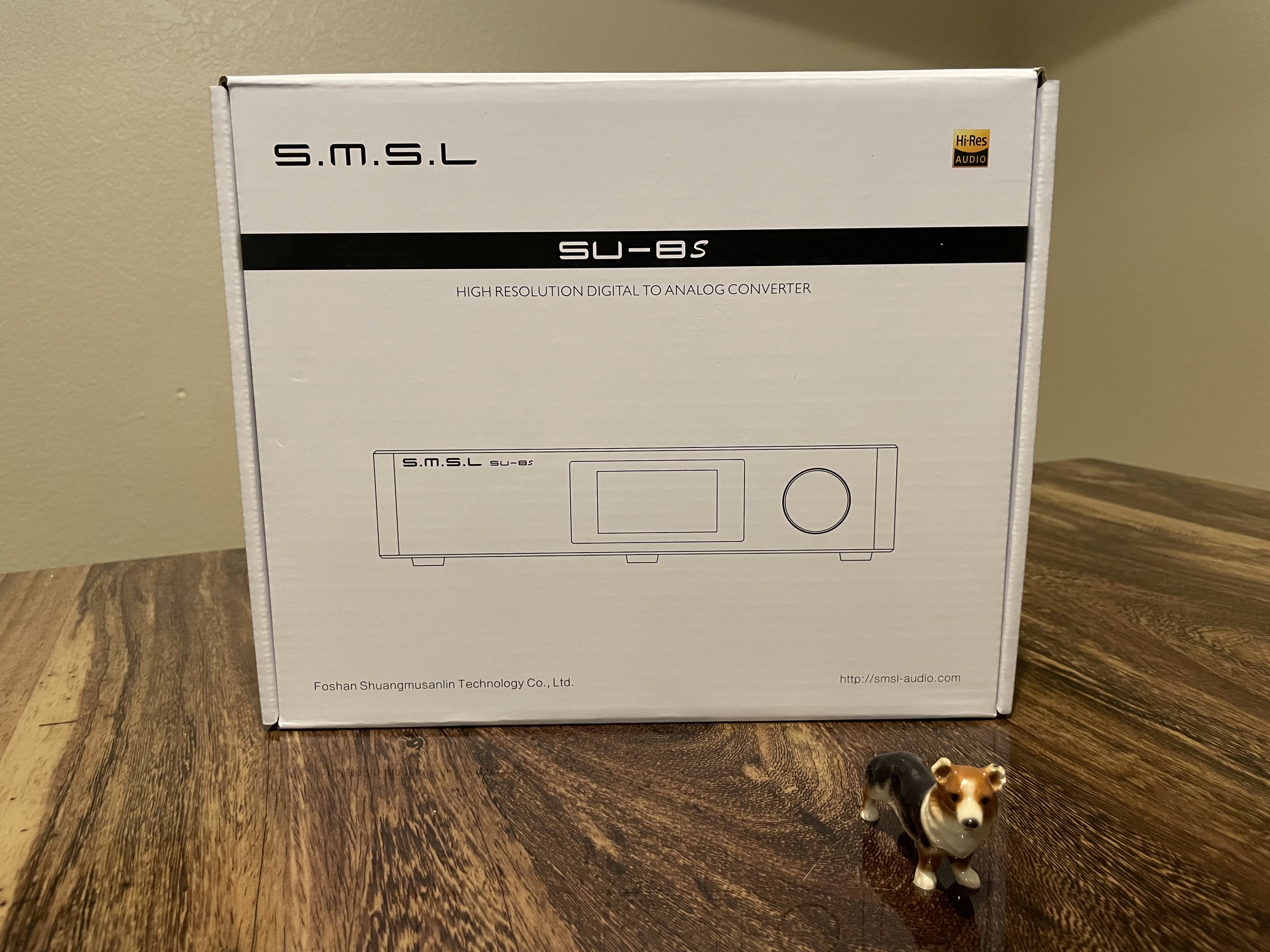 I recently reviewed the SU-9 from S.M.S.L and I absolutely loved it and it continues to be my main DAC for desktop use. It was the first ESS DAC I used that was super smooth sounding yet extremely detailed. It was definitely a big win in my books and came in just under $440 at the time it launched. Now we have a new DAC from S.M.S.L that comes in a little less at $359.99. It’s using the newest SABRE ES9068AS DAC(non pro) from ESS and has a few upgrades to the UI as well.

Thanks to Shenzhenaudio for hooking me up with a review unit early. While I always appreciate stuff being sent in to test and review, It never affects the rating of my review.

The SU-8S can be picked up from Shenzhenaudio here: https://shenzhenaudio.com/collections/all/products/smsl-su-8s-mqa-full-headphone-dac-es9068as-dac-xmos-dsd512-pcm768khz-32bit-bluetooth-5-0-uat-aptx-hd-uat-balanced-decoder

It looks like all the more recent SMSl gear and comes in a nice black matte casing. There is a tempered glass over the lcd display which gives it a nice look quality wise. It’s still not very heavy and can move around if bumped and it’s still somewhat hard to get to sit aligned if used in a stack when stiff cables are in use. 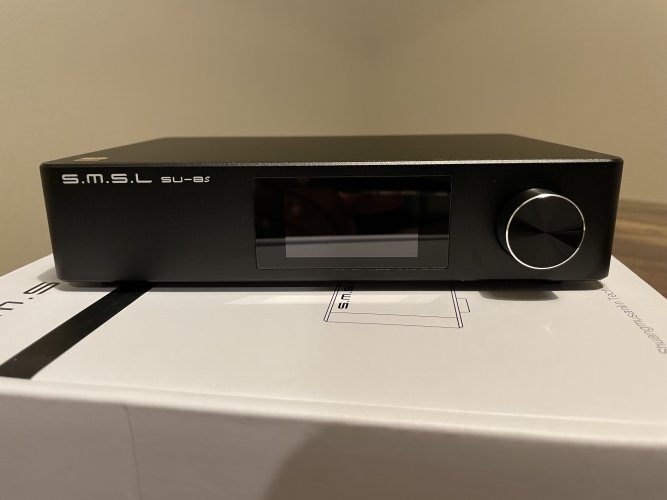 *side note*
While both the SH/SU-8S look the same size wise as the SH/SU-9, The 8S devices are just a hair smaller in width and length, ll the devices are the same height however.

It comes in a super simple cardboard box. It’s well protected in a bag inside of foam. We get a fairly meh USB type B to A cable(same cable that comes with the SU-9), a power cable and a remote. I like the simple S.M.S.L remote and it works with both the SU-8s/9 and the SH-8s/9/sp400 as well as the DA-9 from S.M.S.L. The QC pass card and the user manual is also included. 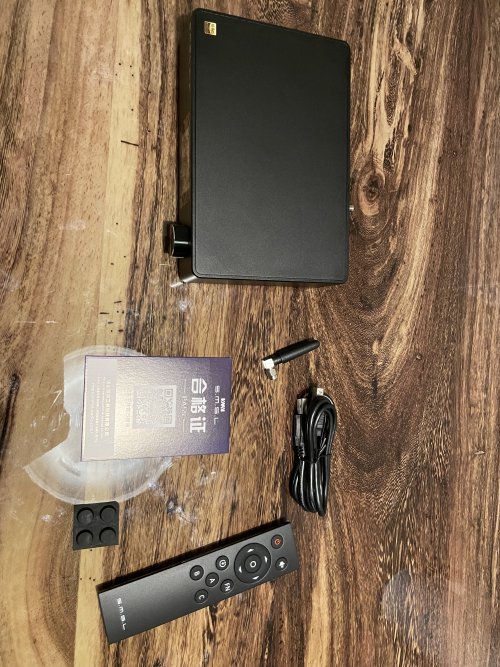 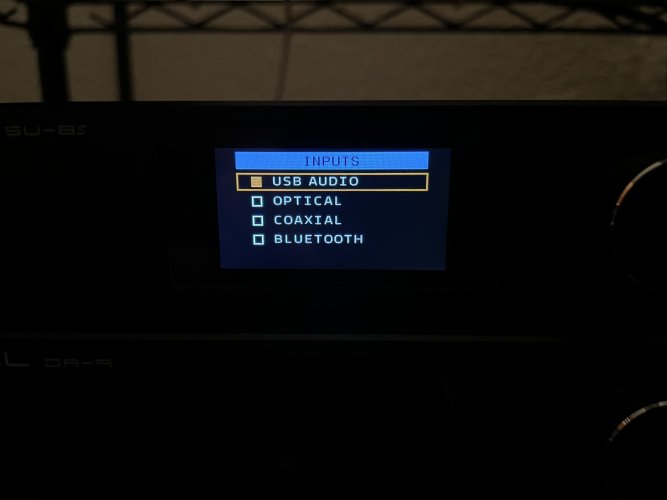 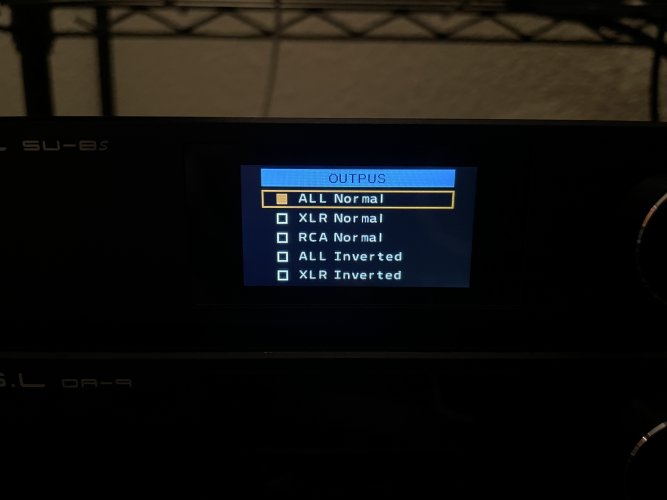 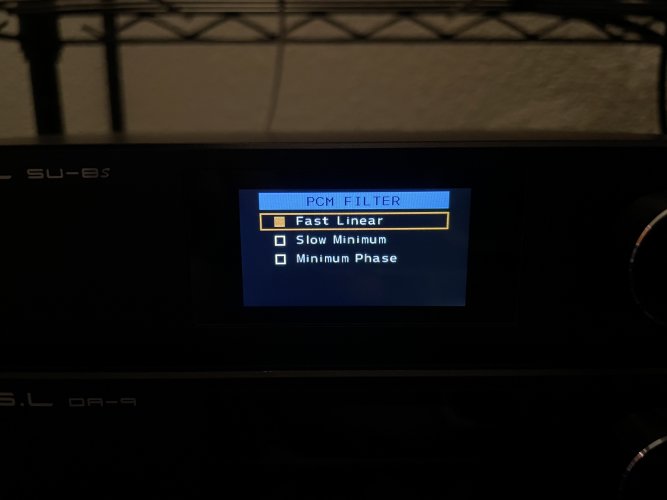 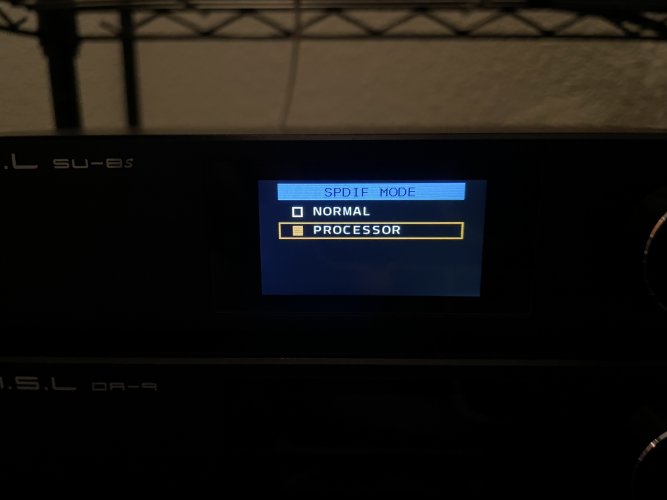 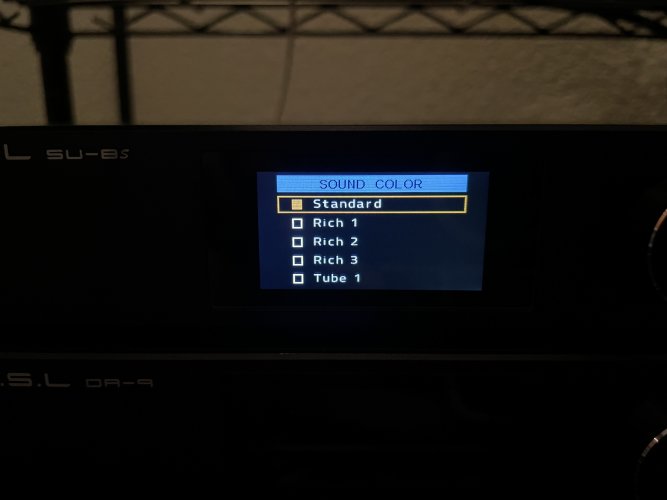 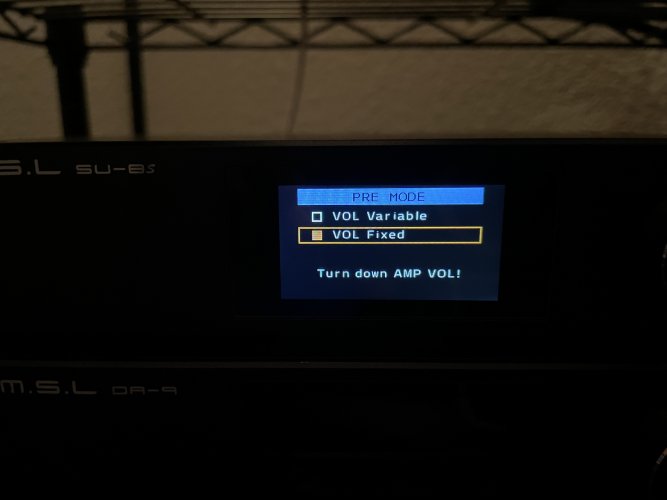 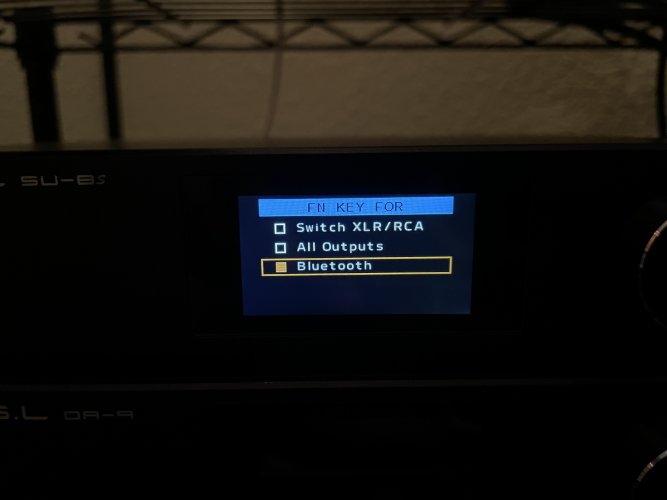 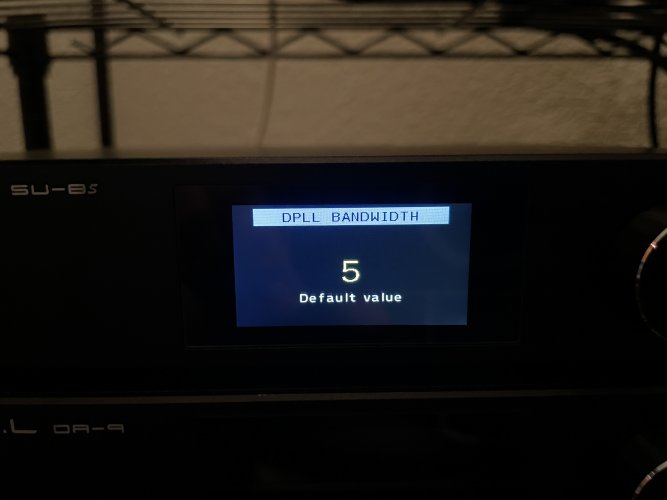 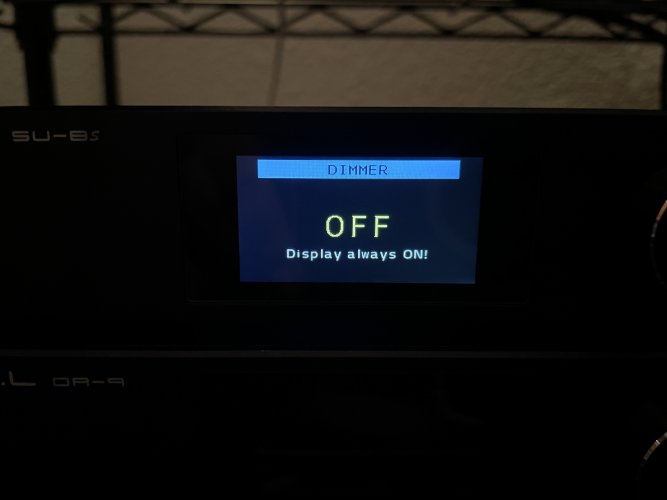 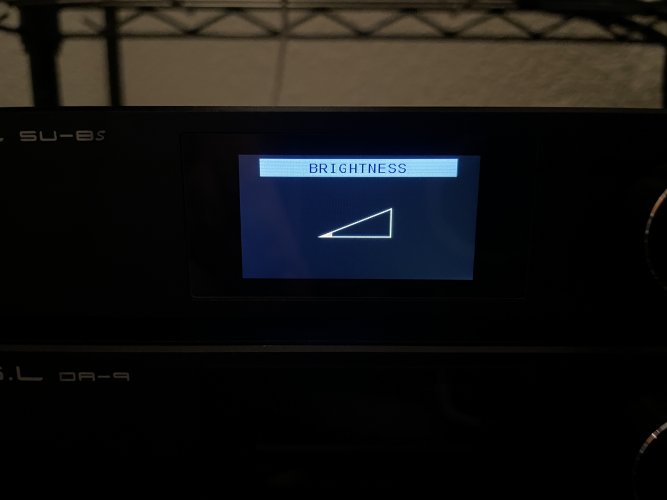 It works... It still has a hard time “latching” to the stream just like the SU-9 when you pick a random part of the song, which can make the song have a second or two of “compressed” sounding playback till it shows MQA again. I still don’t like MQA personally but I still like to check and make sure the feature work.

The bluetooth works really well and while I normally don’t use the feature in my desktop setup, I still had no cutout issues when paired to my PC, iPhone 12 pro or iPad air.

These final impressions were done off the SU-8S outputting to both the S.M.S.L SH-8S and SP400. This will be what the S.M.S.L SU-8S sounded like with the headphones I used. Things like headphone pairings or using different external amps will produce different results and impressions vs what my ears hear on my specific gear.

Lows are well maintained and sounded fairly good off both the SH-8s and SP400. There is a nice impact and thump. It can still come off a bit neutral/lean vs something like its bigger brother the SU-9. The mids have a nice presentation with fairly accurate sounding instruments and vocals. Where this and the SU-9 start to drift apart is the treble and soundstage. The SABRE “glare” is definitely more present and while this gives a nice impression of detail on first listen, it can sound a little metallic and artificial over time. I used to love the ESS SABRE sound flavor in my early audio reviewing days. I tend to enjoy detailed but warmer sources now that I’ve been doing this for a bit.

I think soundstage and imaging are more reliant on amps and headphones. That being said a DAC can add or detract a little bit of staging and imaging. In the case of the two amps and the two headphones I use for width and depth, the SU-8S gets a pass. Width is about average and depth is no different. A “closer to you head” soundstage with both amps I used but I don’t find it to be a real issue. Imaging was phenomenal but I expect that with modern $200+ DACs.

We get Bluetooth, USB-B, optical and coaxial for inputs. We have a balanced XLR out and RCA out as well. Fairly standard and everything is nicely packed into the thinner casing. 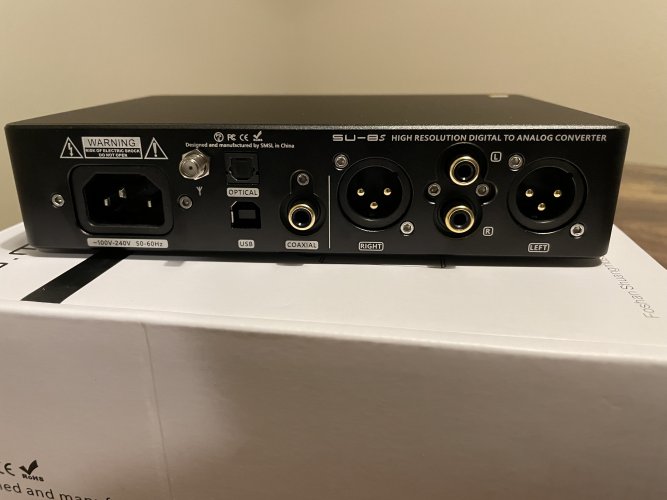 Personal grips with the S.M.S.L?​

I usually have something to complain about but the only things that were missing from the SU-9 user interface were fixed with this new unit. OH! These units still come with only three feet but they actually include 4 extra feet in the box so you can add the feet to make the unit more stable.

Both have a fairly different sound presentation even though they both use ESS DACs. The SU-8S has a higher focus on mids and treble and the SU-9 has better detail retrieval yet doesn’t come off as bright and goes for a relaxed sound signature. The staging was wider and deeper on the SU-9 with my use of the same amps between both DACs. Keep in mind that this is all done via switching gear as quickly as possible. While I did manage to get a really fast speed of switching DACs, this could all be placebo. I did manage to blind pick the SU-9 out over the SU-8S(thanks to the girlfriend for dealing with my weird experiments). So take this comparison as you will.

This is the amp that is meant to “stack” with the SU-8s. The pairing produces a fairly good sound presentation. The “stack” gives a fairly accurate sound without sounding super lean or boring. There is a little more noticeable top end energy thanks to the noticeable SABRE “glare” but for most people I think this will give off a super accurate sounding combo that really impresses. 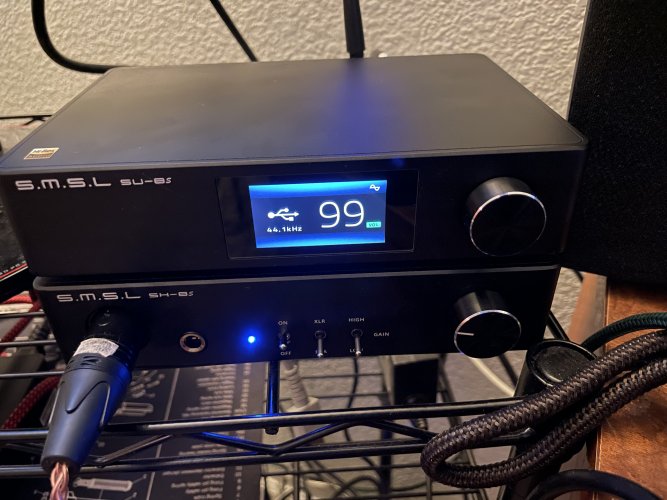 The SP400 is my favorite “Super detailed without being cold/clinical” amp. I never really liked the standard THX sound of amps and this was the first to carry the tag and also blow my mind with my headphones. The SP400 sounds awesome with the SU-8s and it really brings the ES9068AS to life. It also comes in a little brighter due to the DAC being used in the SU-8S. Staging was a bit better and the low end had very good energy with a nice detailed mids and treble. 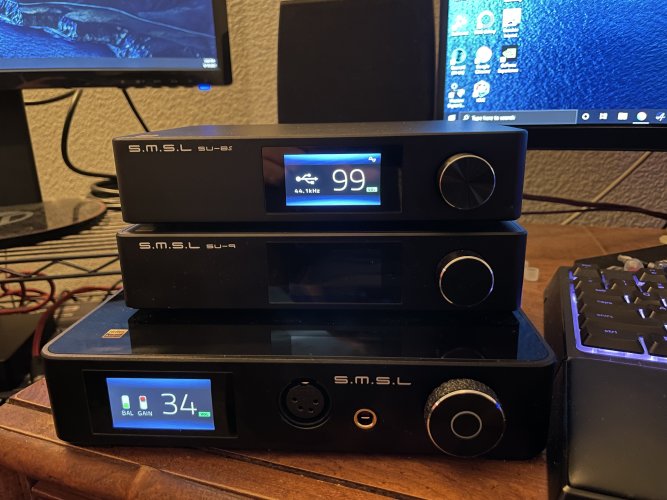 Should you pick the SU-8S over the SU-9? Well if you think you want a DAC that pushes for a slightly sharper treble then this is the DAC to get. If you want a somewhat warmer sounding DAC then something like the SU-9 will be a better option. I think both the SU-8S and SU-9 are winners and I have no issues recommending the SU-8S. I still prefer the SU-9 over the SU-8S but this is a personal sound preference. I was happy to see the SU-8 get its own sequel device as that was my daily DAC till the SU-9 launched. Good job to the S.M.S.L team and thanks for reading!
Last edited: Thursday at 7:57 PM
Reactions: rprodrigues and shenzhenaudio