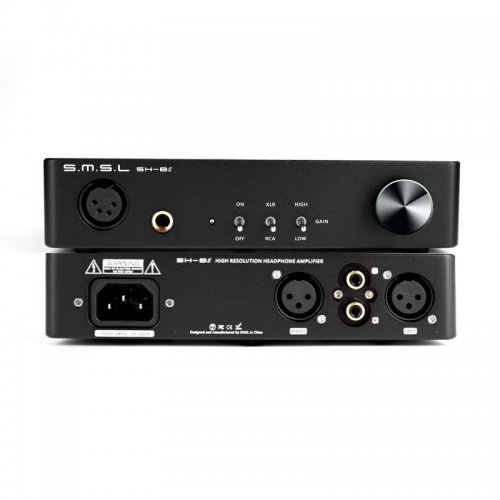 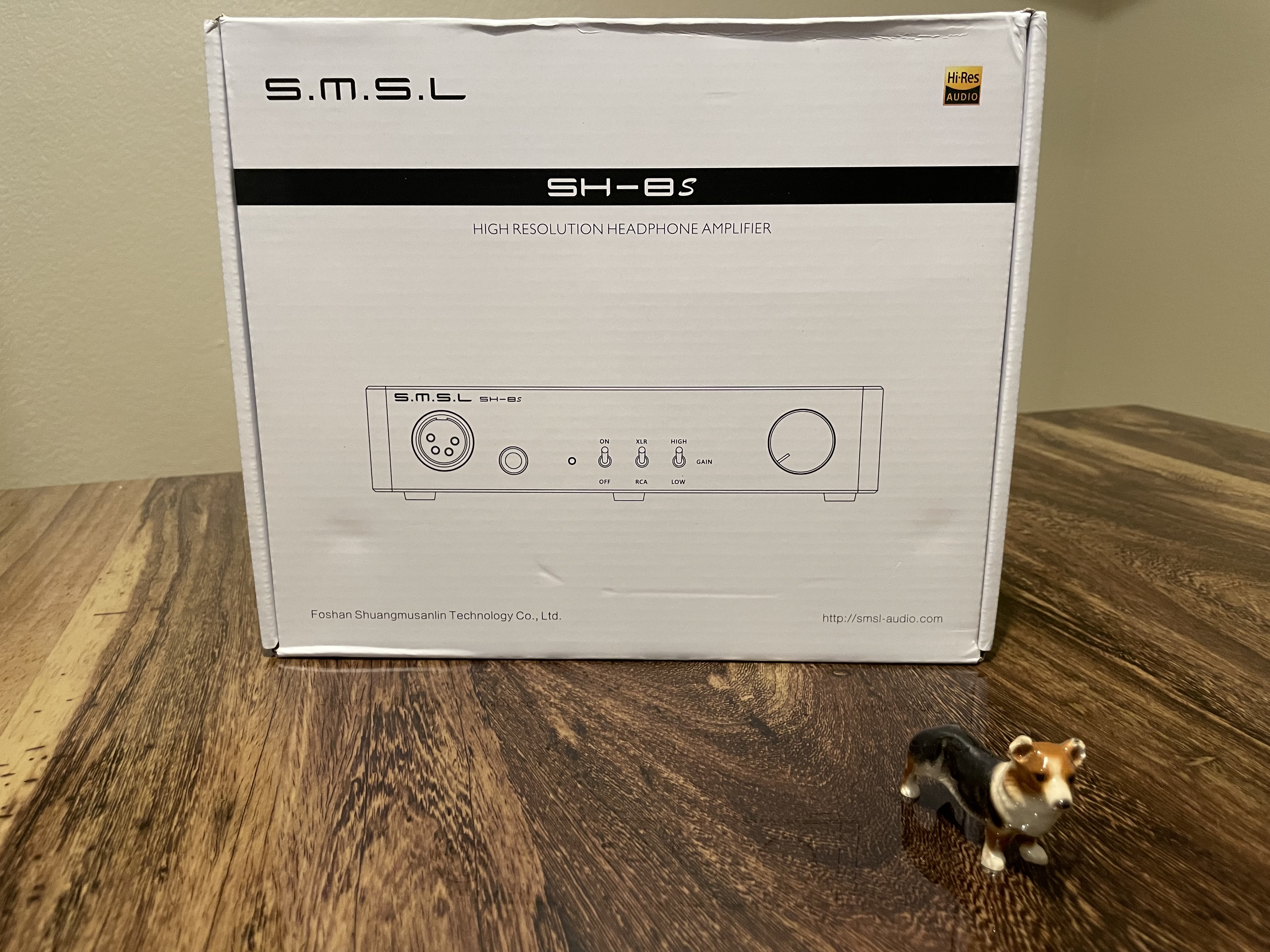 I really liked the SH-9 and still love the SP400 amp from S.M.S.L so I was interested to see what the new lower cost SH-8S brought to the table sound quality and value wise. The SH-8S presents itself as a more “standard” amp with regular switches and no display. The SH-8S also gives a decent amount of power for the price. Will it keep up with the SH-9? Let’s get into the review to find out. The SH-8S comes in at $229.99.


Thanks to Shenzhenaudio for hooking me up with a review unit. While I always appreciate stuff being sent in to test and review, It never affects the rating of my review.

The SH-8S can be picked up from Shenzhenaudio here: https://shenzhenaudio.com/collections/all/products/smsl-sh-8s-opa564-chip-rca-xlr-input-6-35mm-balanced-headphone-amplifier

All the recent S.M.S.L products come in a nice matte black metal casing. The unit is still fairly lightweight which means without something heavy on top of it, it can shift when bumped. While it’s missing the nice display the SH-9 has, it still has the same classy outer shell look and has switches and a normal volume knob vs the relay volume system in the SH-9. It looks fairly classy and doesn’t feel cheap. The volume knob is nice and smooth but still somewhat stiff which means a bit more accurate volume adjustments. Switches all have a nice feel when flicking them up and down. Overall, I’m fairly happy with the unit looks wise. 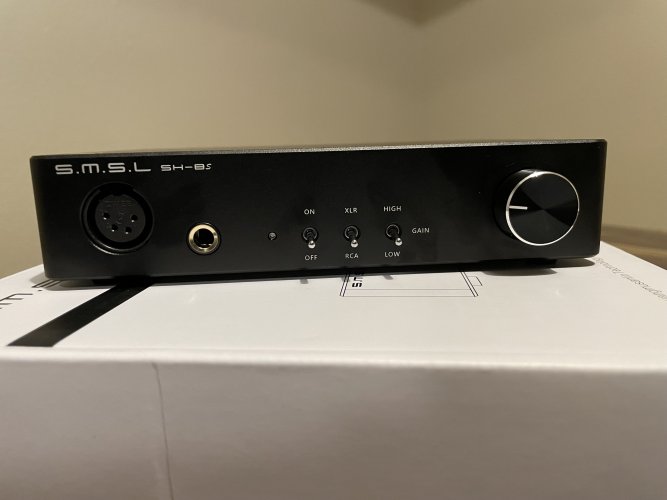 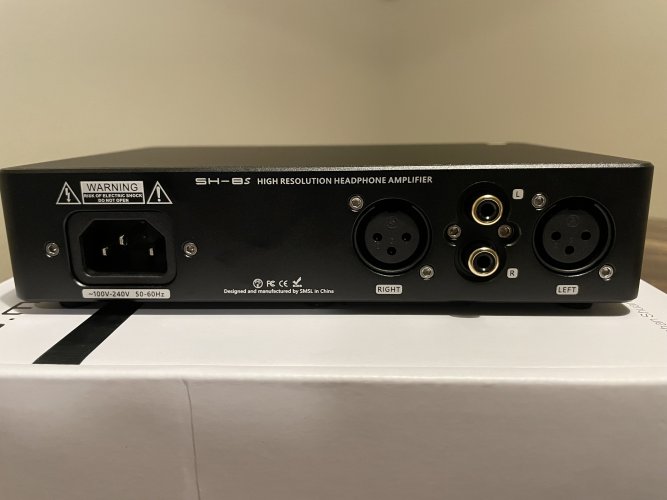 *side note*
While both the SH/SU-8S look the same size wise as the SH/SU-9, The 8S devices are just a hair smaller in width and length, ll the devices are the same height however.

The unboxing is pretty straight forward. Cardboard box, power cable, QC card and user manual and that's about it. 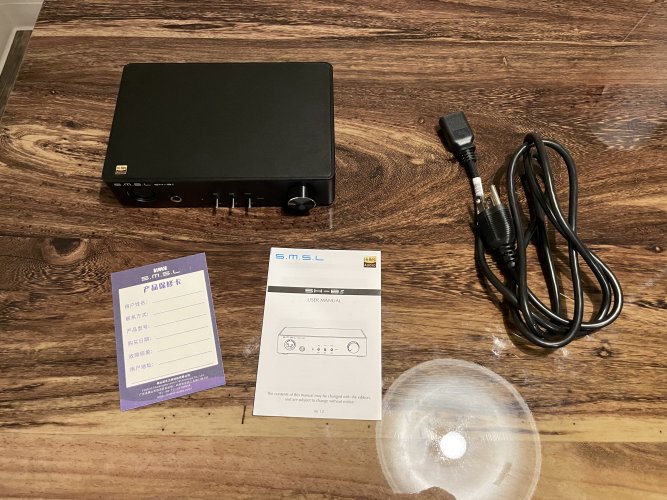 As with most potentiometer volume systems, there is some type of channel imbalance in the first 10-20 percent of movement before things are normal. I’m happy to report that the SH-8S had the best potentiometer I’ve seen in a bit in terms of imbalance to normal channel performance. It was maybe 10ish percent from lowest volume to the point where things sounded matches from both channels. I’ll include pics below of course. The switches have a nice clicky sound and feel to them. 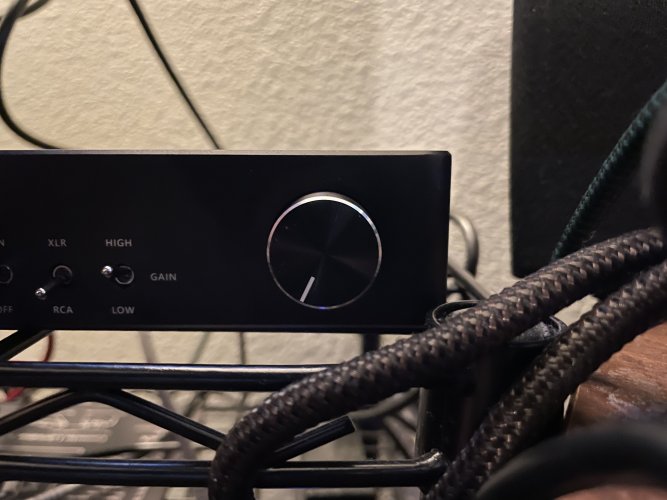 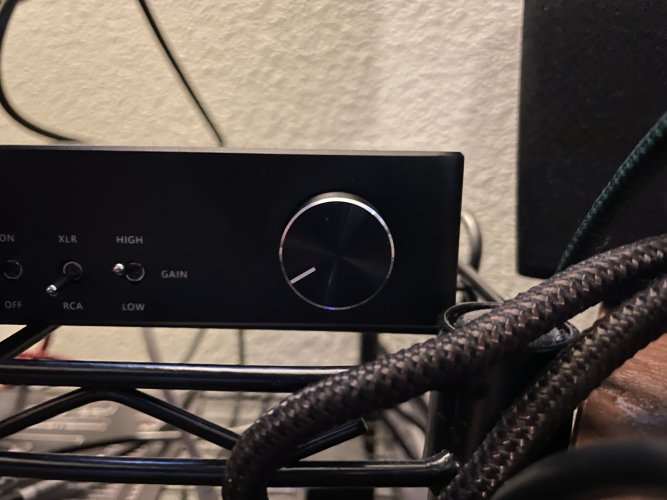 These final impressions were done off the S.M.S.L. SU-9 connected to the SH-8S. This will be what the SH-8S sounded like with all the headphones I used. Since this is an amp, my sound section is mostly going over the common things I picked up from my headphones vs how they perform on other source gear. Things like DAC selection as well as different headphone pairings will produce different results and impressions vs what my ears hear on my specific gear.

Lows have a nice thump and rumble while staying fairly accurate. If the music calls for some impact, the SH-8S does well in not going over the top. Mids have a more noticeable focus and have a sharper edge to certain instruments in the upper mids/lower treble. Vocals sounded fairly good but this was more dependent on what headphones I used with the SH-8S. The treble is fairly accurate sounding but lacks a little in the detail retrieval department when compared to more expensive amps. It has a slightly clinical sound at the higher frequencies but never sounds lean overall. At this price, I really have no concerns with the sound quality on this amp.

While I find headphones to be in charge of width and depth, the SH-8S had a more closed in stage. While not a terrible thing, I personally like a wider and deeper stage. The imaging was great and I heard no issues in the placement of sounds during tracks.

Personal gripes with the SH-8S​

It has a bright blue LED on the front to indicate power. I was a little bummed to see something so bright when it was powered on. There aren't any pre outs either. I wasn’t happy that the SH-9 didn’t have any and I still wish they had at least RCA outs on the back of the SH-8S. Is it the end of the world? No, not really. I think the RCA outs on the Schiit Heresy are terrible so I would rather there be no RCA outs if they wanted to keep costs down and might skimp on pre out quality. 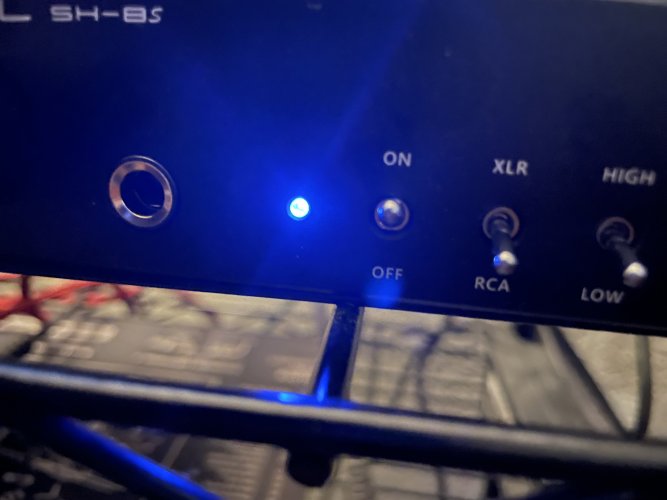 Like the SH-9, the SH-8S isn’t a truly balanced amp. It still has the normal quarter inch and 4 pin XLR jacks on the front for a higher compatibility with headphones. The SH-8S does 6 watts in 16ohm or 3 watts into 32 ohms. This is quite a bit of power for pretty much anything outside of the rare crazy hard to drive gear. I had zero issues running anything I plugged into it. At the moment I also don’t have any super hard to drive full size cans so I can’t comment on some of the harder stuff to drive. Low gain had no noise floor even at stupid high volumes on my senistive IEMs. High gain did introduce light hiss but I don’t believe this will be noticeable on harder to drive full size cans that may need the high gain.

The radiance isn’t super hard to drive but I really liked the way it sounded on the SH-8S. Lows sounded a little better controlled as the radiance hits fairly hard. The mids and vocals had a nice added sharpness that helped the radiance sound better focused and finally the brighter treble made the radiance sound fairly accurate and a little less warm. I find the radiance to be a little too warm for my tastes so brighter pairings tend to work well with a headphone like this.

The OH10 sounded less bassy and more neutral due to the controlled low end and slightly bighter mids and treble. I still like the OH10 on warmer amps since it’s such a fun IEM to listen to. I also use the OH10 to test width when it comes to IEMs. Width was simply ok when used with the SH-8s.

The ZEN is a mid-focused IEM so I wanted to see how it did with the SH-8S and I didn’t like this pairing as much. The mids had too much bite and it didn't take long for me to fatutige out and switch to something else. I have a hard time finding an amp that pairs well with the sound signature of the ZEN. The ZEN is the most sensitive IEM in my collection at the moment. It did pick up noise on high gain at around 10 o'clock. Good news is that the SH-8S would absolutely murder someones ears if one attempted to listen to the ZEN at the volume level. 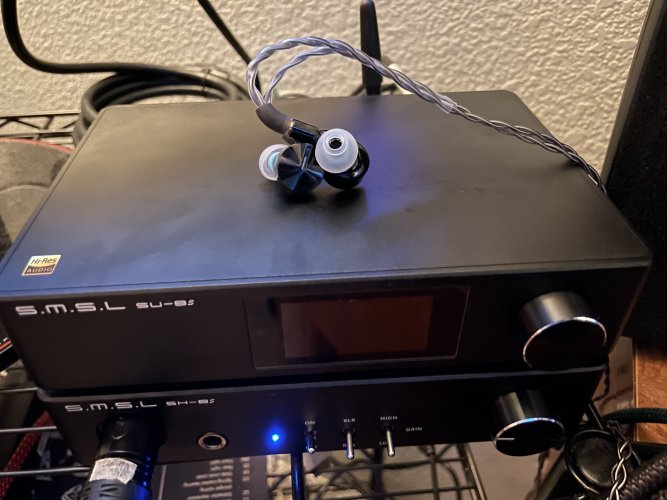 The Clair is my favorite IEM and It also is fairly picky when it comes to amps in my experience and scales really well with better gear. The Clair sounds fairly good with the SH-8s. It can sound a little hollow when compared to something higher up in the amp range but I still had a good time with the pairing. 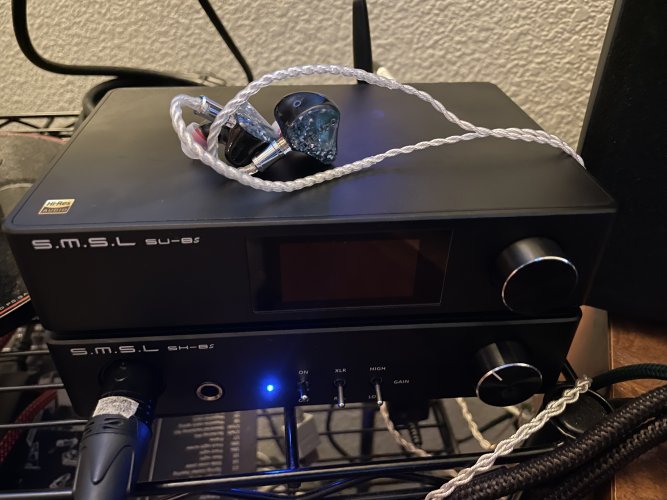 Maybe this is a strange comparison but I wanted to throw a cheaper amp and a more expensive amp at the SH-8S. I used the SH/SU-8S stack against the hip dac and the S.M.S.L stack won in terms of technical performance. The hip dac sounds really good for a little portable DAC/amp but the SH-8S had better dynamics across the audio frequency spectrum. I picked up more details vs the hip dac and the stage felt a little wider as well. This is when I realized that the SH-8 was a pretty good amp.

Since I don’t have a SH-9 anymore, I went with the way more expensive SP400 to see what an extra $400 would get you when both amps were used with a SU-9 DAC. The difference was fairly noticeable. The SH-8S sounded fairly dry and lacking in detail retrieval when compared to the SP400. The SP400 has a better low end presentation as well and finally, the treble has a nice airy sound with a wider and deeper soundstage over the SH-8S. That being said, the SP400 gets super hot when used for more than 20 min and it's flat but takes up alot of room compared to the SH-8S. While the relay system is nice, it still takes some time to reach a big volume jump vs the quick and easy to use simple potentiometer.

Should you save up to buy a SH-9 over the SH-8S? Well, I’m mixed on that personally. While I like the volume relay system and digital display of the SH-9, I don’t think it’s worth the $60 if you don’t care for those features. Changing inputs is easier on the SH-8S but you get channel matched volume relays on the SH-9. I think both amps are awesome and it really comes down to what you like looks wise between the two. I will be giving the SH-8S a full recommendation since it saves a little money over the SH-9 and sounds pretty good from my testing with it.
Last edited: Thursday at 7:57 PM
Reactions: rprodrigues and shenzhenaudio

shenzhenaudio
Thanks for your efforts!
Read more…