Loading…
Pros: Dynamic, powerful sound in a small form factor. Can roll opamps to fine-tune sound. Simple controls.
Cons: No display. No gapless. No breakpoint resume. WAV-only (for now). Short battery life. No longer in production :(
Hi all! I'm back from a reviewing hiatus as I settled into a new job with more responsibility at a newer company. It feels good to be at the point where I can tell you about some of the cool, new audio gear I've found lately. The absolute most interesting audio gear I've had the pleasure of testing out recently has been from @tjstyle of Revamp Acoustics. If you haven't heard of them, I won't blame you. I stumbled across them completely by accident. My man @tjstyle is one cool cat. He's an Android developer who can also whip up a mean circuit board. He's working other cool stuff besides audio gear, too. Seriously cool dude!

Okay, so how did I hear about the TeriPlayer G1 and why was I interested? Well, I was just skimming through the Portable Source Gear forum one day and saw a thread about the TeriPlayer. Like many of us, that immediately brought to mind the Altman TeraPlayer so I clicked on the thread to see what was up. It turned out that @tjstyle was hand-crafting DAPs for an audio club in Indonesia with the ultimate goal of creating a more cost-effective alternative to the TeraPlayer. Hmm... I thought this was pretty interesting, so I found a way to contact the guys responsible for the project (Deni & TJ). After some back and forth, I purchased a G1 of my own - the only one they sold to someone outside of Indonesia. Not that I'm the only G1 owner outside of Indonesia. Given the rarity and (spoiler alert!) bang for your buck you get with G1, it's been on eBay at much higher prices than they were originally sold for.

For this review, I'm trying a new format and am going to direct you to the video below for the bulk of the review which not only covers the TeriPlayer G1 but also TJ's newest creation - the Nuansa A1 portable amp. They create the cutest stack I've ever seen, and their sound signatures complement each other very nicely. Up here on top, Im just going to give you the TL/DR version so please check out the video review and help me out by providing feedback in my YouTube channel.

Ok, here we go. But first a couple of useful links...

I've used TJ's TeriPlayer G1 for several weeks with everything from sensitive IEM to full-size headphones tat I wouldn't take out of my house. I also brought it to RMAF CanJam to get feedback from other headfi'ers I trust. In that time, G1 has become a serious contender for most ear time out of my ever-growing stable of DAPs despite the rudimentary user interface, lack of gapless, and short battery life of only 5-6 hours. Now, that's saying something because I have a lot of DAPs to choose from. One thing that's helped that is the ability to change opamps. I've switched from the stock AD8397 to MUSES02 for a smoother sound signature and am really happy with the balance of dynamics and smoothness I'm getting. Everything I throw at this little guy from my beloved FLC8S to my new love the AudioQuest Nighthawks sounds amazing. At first, I wondered if I was a bit cray-cray, which is why I took it to RMAF for others to hear. I let some of my seasoned headfi buddies and also some well-respected members of the trade give it a listen. At first, they thought it was a joke because it's just a simple DIY DAP. After listening, they were G1 believers and thought it was easily worth twice the original price of around $180. Most of them thought the sound quality was more along the lines of a $400 DAP but were a bit put off by the overly simplistic user experience. That's understandable. It's pretty rudimentary, lacking many of the creature comforts of mass produced DAPs. That isn't necessarily a bad thing, though. Just think of it as getting back to basics, and you'll probably be fine!

Positives are the very good sound quality, which strikes a good balance between a more energetic, dynamic sound and a smooth, organic sound, driving power, solid build quality, simplicity, and the ability to roll opamps to fine tune the sound.

Negatives are lack of gapless and breakpoint resume, short battery life, wav-only for now (although I've been testing FW with MP3 and FLAC decoding), and complete and utter lack of availability.

Four stars because I think the audio quality is damn good and overcomes what some will perceive as negatives given the G1's simplicity...

Ok, I think that's enough back story to set you up for the video review, so here we go. I hope you enjoy, and if you have any questions please feel free to ask away! 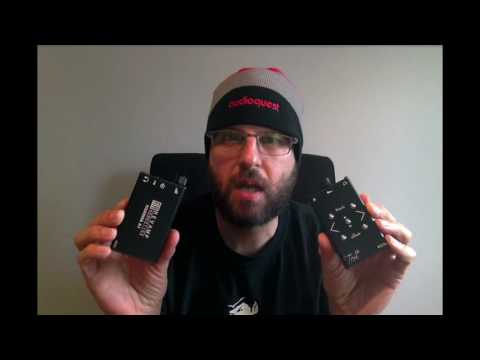 A big thanks and shout-out to @tjstyle for creating such wonderful audio gear. There's quite a mystique building up around your products, and I hope others will be able to enjoy them soon!

hqssui
Thanks  for the review.

twister6
Nice way to tease everybody, Nic : "Great DAP... but no longer in production"

nmatheis
Lol, @twister6. I'm hoping @tjstyle will put this little guy back into production with an updated battery for increased playback time. Adding in at least MP3 and FLAC decoding would be nice, as well. Gapless won't happen for the original G1, but I've expressed my keen interest in gapless support to TJ and am hoping he can implement this in future versions!