Pros: SD card playback. HP amp is great. Sounds excellent without needing a power conditioner. DSD playback from SD or USB. Excellent USB input. Small
Cons: Front switches aren't labelled and the controls are confusing.
As part of my 3 DACs series, I borrowed the older version of the Resonessence Invicta. Here is my video about it: 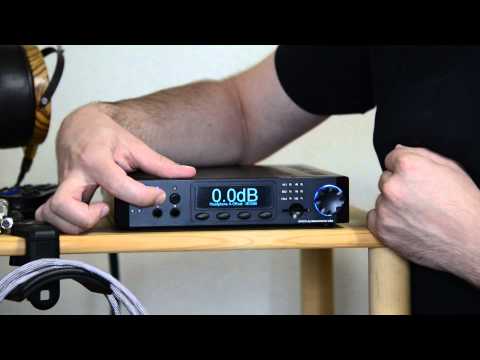 uncola
Currawong I'd love to see you review the emotiva dc-1, seems like a great value all in one unit.. they recently said the headphone outs are 1.2 watts each at 32 ohm

maserati2303
I wonder how Resonessence comparing to the yulong da8?

Proglover14
Those are some killer looking cables! Nice write up.
Pros: Incredible sound quality, extensive feature set, superior build quality
Cons: None
I've owned the Resonessence Labs Invicta DAC for 2 weeks now, and feel that I have enough experience with it to offer some thoughts. Although I should probably wait a bit longer to provide feedback, my love and appreciation for this kit won't allow me to. It has been a revelation for me and has transformed  my existing setup to a place it hasn't been before.

Build Quality - It is built like it's been carved out of a block of solid metal. The fit and finish are simply immaculate. Being a bit OCD with such things, and one that appreciates all things that are finely engineered, it meets my expectations for something that costs $4000.00. All of the controls have a solid tactile feel, providing feedback that my physical input has been accepted. I really appreciate that Resonessence Labs clearly placed importance on build quality. I haven't opened it up, but can see through the vents that the internal components are accommodated with no additional space left to naught. The connectors on the back seem to be top quality as well. Some might take issue with BNC connectors being used in lieu of RCA for the S/PDIF inputs, but for the price one should expect that superior physical connectors have been used as opposed to more easily accomodated ones. In all, the build quality is great. You can take issue with aesthetic choices if you care to, but it wasn't a criteria in my purchasing decision.

Features - I'll not spend a lot of time here, since the features of the Invicta are obviously public knowledge, but I'll touch on the things that I find important or compelling.

First let's mention what I guess is the feature that sets the Invicta apart from other DACS, which is of course the SD card slot. What a simple but brilliant idea! I read a lot about "jitter" and other problems associated with interfaces between equipment like cables and clock synchronization. Well, if you use the SD card for your media, those "problems" don't exist. Playing music off of the SD card (which I'm doing as I write this) is quite straightforward. Early complaints were that songs were played out of order, but those have been addressed. How cool is it that you can grab the Invicta, a SD card and some headphones, and have a complete (and awesome) playback system at your disposal? The answer is, it's very cool! Also, since the Invicta is upgradeable (thanks to the use of a FPGA among other things), the SD card slot allows you to download SW upgrades and apply them to your DAC. I'll be damned if that isn't an obvious but fantastic feature! Since its release there have been numerous capabilities added to this DAC, and more are to come. You can read about those upgrades on the Resonessence web site.

Now I'll talk very briefly about the 7 available filters that you can choose from for playback. Aside from 2 filters that are "built in" to the SABRE ES9018 chip, the nice engineers at Resonessence decided to offer 5 additional filters to enhance your listening pleasure, and provide some choices to tailor the sound of the Invicta. I haven't had enough time with the Invicta to offer detailed comments about these filters, but I'll say that both depending on the source material you're listening to and the hardware you are using, it is really nice to have the option to make some modifications to better accomdate your setup and music. To my ears, the filters tend to either tighten up the sound or give them a broader pallet and a more relaxed feel. I don't really have a way to express what I hear in this regard, so I won't try to. All I can say is that depending on what I am listening to I favor different filters. I do find myself gravitating to the Minimum Phase IIR filter and Linear Phase Apodizing filter for the majority of my listening.

As a Headphone Amp - So, the DAC has 2 headphone outputs that can  be independently used and controlled (for output power), and thanks to last month's software update, (see my comments on the SD card) can also be used in balanced mode via the 2 TRS jacks. I haven't tried the balanced mode feature due to lack of a proper cable or adapter, but the fact that a year after releasing this kit they thought of and implemented this new feature is pretty awesome. I have used 2 headphones with the Invicta, the Sennheiser HD-800 and Audeze LCD-3. The HP amp on the DAC drive both splendidly. It's clear that the headphone outputs were not an afterthought or a function provided just for the sake of an additional feature, but as a highly spec'd and thought out addition to an already amazing DAC. The Invicta drives headphones effortlessly. Both my Audeze's and Sennheisers sound luxurious when driven by the Invicta. In fact, I own another manufacturer's DAC/AMP combo that is admittedly not on the price level as the Invicta, but nevertheless quite respectable. I don't care for the Senns much at all with that kit. However, with the Invicta, I prefer the Senns over the Audeze's for most of my listening. I have a DNA Stratus on order and am very excited about it, but assume that it will be just another flavor and might not trump the Invicta. We will see.

As a Preamp - My setup at home is not necessarily high-end, but I think it's respectable. I have an Arcam FMJ-23 CD player, a Marantz PM-17 MK II Integrated Amp and Tannoy D-500 speakers. Just 2 days ago I decided to bypass the preamp in the Marantz (for the first time ever), hook up the S/PDIF output of the Arcam to BNC-1 of the Invicta, and try out the Invicta as a preamp. This setup breathed new life into my stereo. I won't say that the change was overly dramatic, as the Ring DAC in the Arcam is pretty exceptional, but it did widen the soundstage of the system and seemed to make music a little more defined (whatever that means). I have really enjoyed experimenting with the digital filters on different material as well. Using the SD card as a source is exceptional, and provides another flavor to an already great (to my ears) home stereo. I guess that the bottom line is it didn't hurt my system, but improved it by a fair margin. I plan to leave the Invicta as a permanent fixture to my home stereo, which wasn't originally in the plan.

Final thoughts - I will stop babbling now and just say that my purchase of the Resonessence Labs Invicta was one of the best tech purchases I have ever made, and has provided me with an immense amount of pleasure in the short time I've spent with it. There were other DACs I considered, but the geek in me went for this one. In the end, the geek is satiated, and much more importantly my ear for music has been treated to an amazing experience. If someone told me I would have to pay more to keep it, I would. My sincere thanks go out to Mark Mallinson and the team at Resonessence Labs for taking the risk to build a superior product right out of the gates.

See above for detailed review. In short: this is the best DAC I've ever heard, and I've heard quite a few including more expensive models. When the engineers who designed the ESS Sabre DAC chips make their own DAC, the world should stand up and take note. This is how it is done. For a cost no object system, this is very highly recommended.