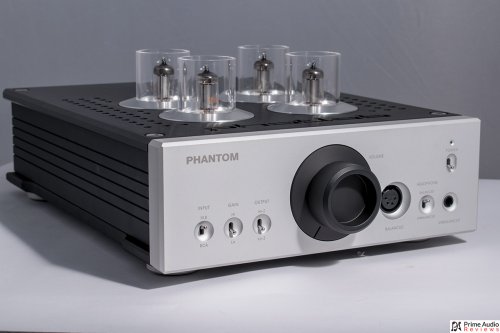 I like peaches. Is that relevant here? Maybe, maybe not. And what does that have to do with the Phatlab Phantom Pure Class-A Full-Balanced Tube Headphone Amplifier? Let's jump into the review and I'll tell you about it.

Every now and then something turns up on my doorstep that presents a real challenge. The Phatlab Phantom is one of those things. I didn't really know what to expect from it in a sonic sense but boy oh boy, physically it was quite a first impression. It's safe to say that I have never reviewed anything like this before.

When I learned I would be testing this headphone amplifier, I naturally jumped onto the Phatlab website to check it out. My first thought upon seeing it was "Tubes. Sweet!" I had no idea what I was in for. Pictures cannot do the Phantom justice. In short, this thing is a behemoth. But I'm getting ahead of myself...

Previously I reviewed and subsequently fell in love with Phatlab's Sassy II. It is still one of my favourite audio devices to this day. The Sassy II is a portable amplifier and can be held easily in one hand. Not so with the Phantom. You can see the full Phatlab Sassy II review for more info on that. 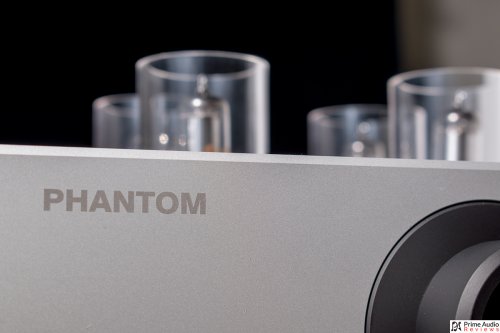 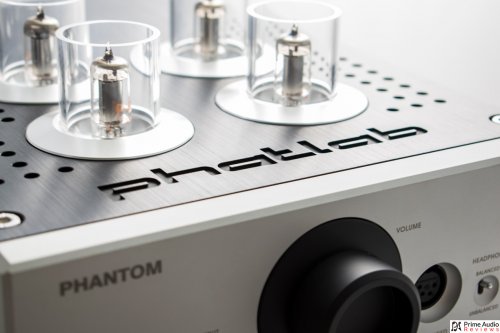 My initial reaction when I opened the box was one of surprise. This thing is HUGE. Pictures can't do it justice and don't really portray the full scale of the device. I like to think of its dimensions as roughly the size of a briefcase. Putting it in more scientific terms, the dimensions are as follows: 275 mm x 405 mm x 170 mm.

Built like the proverbial tank
Not only is the Phantom large, it's also heavy. You'll need a good, solid desk or table to put this amp on. The net weight is a whopping 12kg (26.4555 pounds)! So why is it so heavy? Well, that's because the chassis is constructed from 10 mm solid aluminium and the faceplate is 20 mm thick.

The reasons for such a heavy-duty chassis are for rigidity and precision. Phatlab wanted to mimic the single aluminium brick that they used to craft their portable Phantasy model but were unable to duplicate it due to its excessive size. So instead, they have used the solid plates and connected them seamlessly to achieve a similar result.

Another reason for the weight are the three custom-made transformers (one power and two output), which are over-rated compared with their mere 2 to 4-watt output power.

Aesthetics
To say the Phantom has striking appearance would be an understatement. It begins with its sheer girth, making it immediately stand out. The solid black chassis has an industrial aesthetic and gives an impression of one serious piece of kit.

The silver faceplate is designed to be simple and intuitive and has the same industrial yet elegant feel of the chassis. It's dominated by the large volume knob in the centre which is black in contrast to the silver colour of the faceplate. I'll cover the switches and functions of the faceplate in the next section.

On the top of the Phantom are, of course, the four 3Q4 (DL95) directly heated tubes (DHT). When the unit is powered on the 3Q4 tubes glow a brilliant, rich peach colour and are just gorgeous to look at. These are surrounded by clear acrylic tubes which can be easily removed if desired.

"The glow of one warm thought is to me worth more than money." Thomas Jefferson
Click to expand... 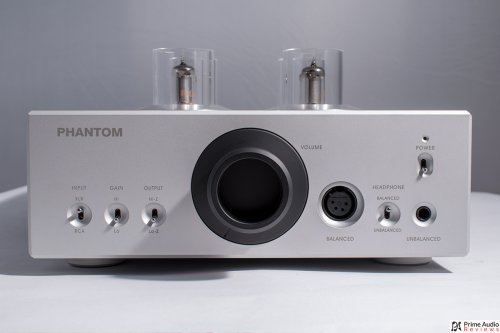 On the front panel are (from left to right):
The volume knob feels great in the hand and has a nice smooth action allowing for precise adjustments.

Here is where I found my only real gripe with the Phantom. The laser etched text is white which makes it extremely difficult to read on the silver surface of the front panel. 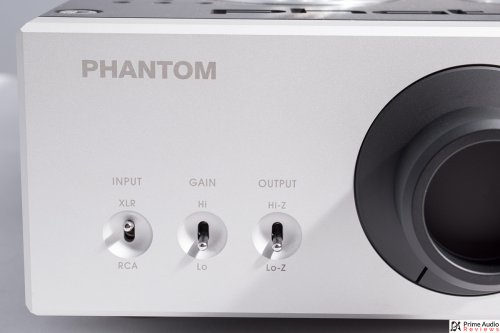 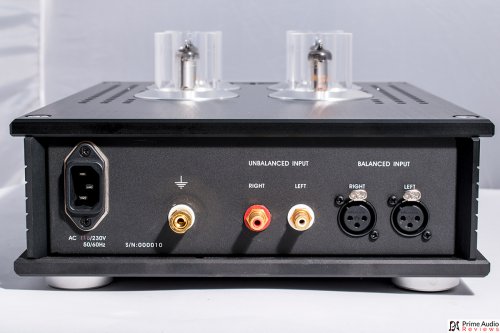 The back panel contains (from left to right):
Internals 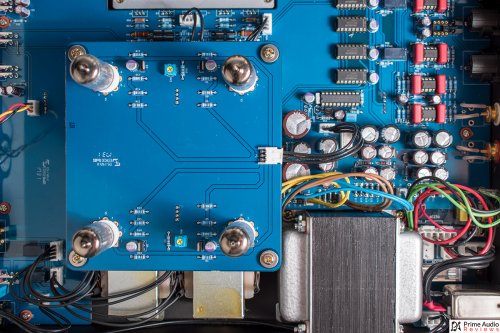 Even at very low volume, there is no channel imbalance thanks to the four 10-bit R-2R resistor ladders implemented before each amplifier module for unit control. So effectively what you have is a true analogue signal path with a digital interface.

Even the transformers were carefully selected for optimal audio performance:

"Phantom is integrated with high-quality output transformers. Thanks to the roomy enclosure, we have plenty of space to house high power iron cores without compromise. The model used in Phantom is newly developed especially for its output stages and driven by two amplifiers in a push-pull style to minimize distortion and noise."
Click to expand... 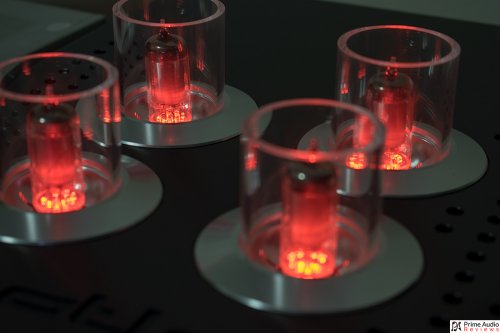 A unique and interesting feature that has implemented is the independently suspended tube module. The four specially designed pillars supporting the tube assembly have a spring suspension in order to dampen any vibration to the directly heated tubes.

Phatlab is a true believer in the Directly Heated Tube because of their intimacy and lifelike soundstage compared to non-filament type valves. Another benefit of DHT is that they immediately warm up to working condition, although the company does suggest that optimum sound quality comes after a short warm-up period.

The 3Q4 vacuum tube is a low voltage device, which is another reason they were specifically selected. It makes no sense to waste lots of energy in a high voltage supply while only using one-tenth of its voltage swing.

If you're a tube roller, the Phantom has you covered. Other seven pin tubes such as the DL95 and CV818 are also compatible. 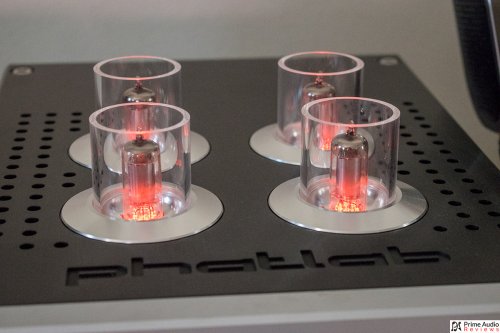 Sound, Pairing and matchability
The Phantom is ideal for powering hard to drive headphones. It has been tweaked to increase the output wattage, in particular for some of the popular planar headphones on the market. Due to the nature of this powerful amplifier, it doesn't pair particularly well with some low-impedance gear. But if you've got some phones that require some real grunt then the Phantom has it in spades.

Headphones
Acoustic Research AR-H1 (Balanced XLR + Low gain, Low-Z)
The AR-H1 planar magnetic is rather unusual in regards to driving power. At just 33 ohms you might think it can be driven by almost anything but that isn't the case.

When it comes to DAPs, most of the ones I tried with it didn't quite have the gusto to make the AR-H1 perform it's best. The AR-M20 does a fine job, however, and matches with it really well. When I connected it to the Phatlab Phantom, I expected a good deal of background noise and hum but actually, it's almost imperceptible. When there's music playing I didn't notice any noise at all.

With this combination, the AR-H1 sheds some of its leanness and gains more body in the vocals and midrange. Bass also earns some extra body and an increase in decay, which fills out the sound more. In GoGo Penguins "So It Begins" I was quite surprised at the fullness of the bass and overall presentation. The AR-H1 sheds some of its clinical precision and delivers a more analogue experience when plugged into the Phantom, adding some smoothness to note edges without compromising their definition.

The treble has noticeably more harmonics and sounds more 'live' for lack of a better term. There are more sparkle and shimmer present without making the H1's treble become edgy. The extension is great and there's definitely more liveliness in the treble when paired with the Phantom.

This is a magical combination for listening to classical, jazz and rock music, though it's certainly not confined to these genres alone. The soundstage sees an improvement in width and layering plus resolution are superb. 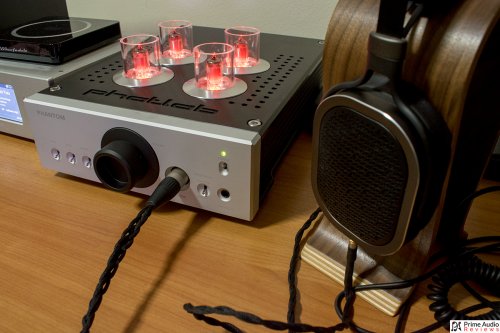 Beyerdynamic DT990 Pro (SE + Low gain, Low-Z)
In Low-Z the DT990's 250-ohm impedance is enough to stifle any of the background hum. When switched to Hi-Z however, a bit of background noise starts to creep in.

In "Talk to Me" by Run the Jewels the DT990 bass is deliciously textured and weighted, again with that extra organic touch delivered by the Phantom.

Thankfully the already bright top end of the DT990 doesn't become brittle but like the AR-H1 delivers extra airiness and extension. That's quite a feat but hey - tubes do special things with their rich 2nd harmonics and that's arguably their biggest appeal.

The somewhat thin midrange of the DT990 Pro gets a bit more volume and by that, I don't mean loudness but mass. Phantom's influence fills in some of the space in vocals and instruments with more body while maintaining speed and precision.

Campfire Audio Cascade (SE + Low gain, Low-Z)
Of the various headphones I tested, the Cascade was the least compatible with the Phantom. It's not surprising really, as the Cascade is designed as a portable headphone and therefore is sensitive and easy to drive. As soon as it's plugged in the Cascade hums like crazy and is pretty much unusable with this pairing.

That's not necessarily a negative for either component; the Phantom can be a little picky about matching and the Cascade with its 38-ohm impedance simply doesn't need extra amplification (although it does scale well with a quality DAC).

Meze 99 Classics
This is another headphone that doesn't pair well. While there's not as much electrical noise as with the Cascade, the 99 Classics have enough hum to be distracting. Not only that but all of the extra driving power from the Phantom seems to overwhelm this headphone and the bass becomes a bloated, sloppy mess.

Again, I'm not criticizing the headphone or the amplifier here. It just highlights the fact that you need the right elements to create synergy.

IEMs
I tested several in-ear monitors and the results were mixed. The DUNU DK-3001 handled the power well, as far as background noise goes (surprising at just 13-ohms!) but did lose some of its control in the bass. However, it was still very much listenable.

The Trinity Master, with my favoured green nozzle filters, actually worked quite well. With its push-pull dynamic driver configuration, the Master's bass is always very well controlled and it was able to maintain that control in this situation. If anything the dynamic driver seemed to revel in the extra power being driven through it.

I also tested the HE 150Pro earbuds and these sounded amazing with the Phantom, likely due to their 150-ohm impedance which seems to be a sweet spot for this amp. The overall sound, in general, is full and meaty with this matchup and the synergy is surprisingly good.

The Phantom is obviously overkill for IEMs in general but I thought it would be interesting to see what happened when I tested some with it. What I learned is that with high impedance gear it's a viable coupling but otherwise, there are better options out there. 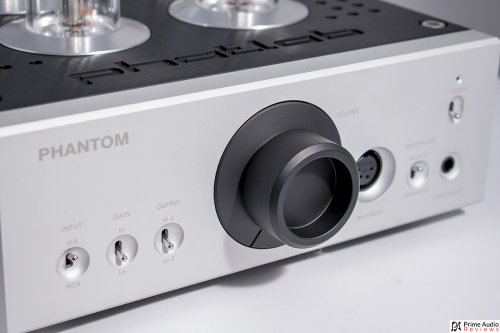 Phatlab Phantom Conclusion
Well, the Phantom is certainly an exceptional piece of gear. It's extremely powerful, meticulously crafted and reproduces music with transparency and clarity plus that hard to quantify tube magic. As a bonus, you get that captivating peach-coloured glow of the 3Q4 tubes. So that's the peaches but you might be wondering where's the cream? In case you haven't guessed already; the cream is in the sound.

One thing I've learned about Phatlab is that they don't follow popular industry trends. Instead, they choose a product and build it to be the very best that it can be. Rather than regularly releasing products just for the sake of having something new, they wait until they develop or invent something that can surpass the performance of their existing lineup.

If you're looking for something extraordinary to pair with your headphone collection then the Phatlab Phantom should be given serious consideration. Granted it doesn't come cheap but this hand-crafted beauty is truly something special. If you're attending CanJam in Singapore this year (2018) the Phantom will be there for audition, so be sure to stop by the Jaben booth and check it out.

*This review was originally posted on my blog. You can see my other reviews at Prime Audio.
Reactions: Anjolie and Ritvik