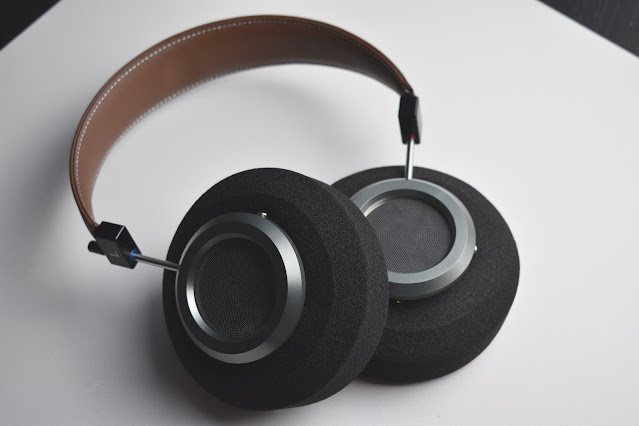 Openheart are a brand that I really knew nothing about except for reading a couple of comments about one of their IEM models. I went on their page, which is a store on Aliexpress, and came across the OH2000, a set of on-ear, open back headphones that are very reminiscent of Grado.


I had absolutely no idea what they were like, I didn’t even check out the comments, but for 40€ I thought they would have some great bits to steal if I ever get around to some Grado modding. So, a couple of weeks later, they showed up.

The headphones did not come in any kind of box, everything came wrapped in bubblewrap inside an oversized envelope, however, the contents I must say are pretty impressive.

In said envelope I received the headphones, a cable, a fake leather carrying pouch, a (real?) leather pouch that contained a 3.5 to 6.35mm adaptor and a clip for the cable, a leather cable management strap and a set of extra G-Cush style pads.

To be honest, except for the lack of a box, I am quite impressed with the contents, there is far more included than is expected of something in this price range and the included items are actually of decent quality. 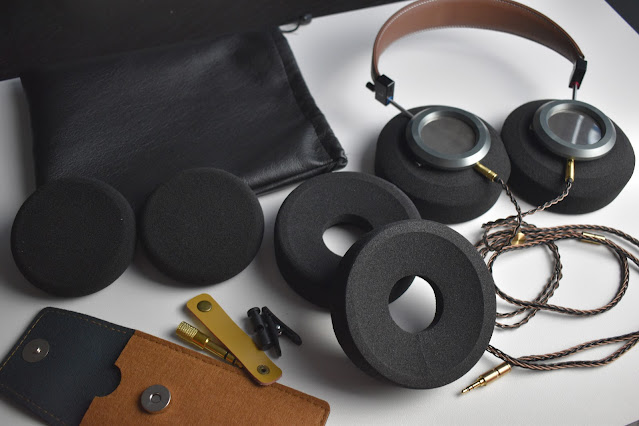 While it is very easy to take these headphones apart, the actual components seem to be of a very respectable quality. Ok, the headband is still a thin metal band covered in a strip of (real?) leather, and the build is as simple as it gets, but nothing seems misaligned and all the parts are decent.

As far as aesthetics, well, these are sort of like a Grado metal mod. I don’t think that they have as much of a “retro” look as the grado SR line but at the same time, they have their own sort of “modern-retro” look going on.

The included cable is also quite nice, admittedly it is not some high end boutique cable, but I prefer it to other cables I have received with headphones costing 20 times the price (I’m looking at you Ananda!).

The pads aren’t great, the included ones being like some overgrown Porta-Pro pads (just thicker) and the G-Cush style pads are a little “itchy”. Other than that, I have zero complaints about build quality at all.

Comfort is not bad for an on ear headphone, although I will say that I have to extend the rods all the way for them to fit me. It is true that my head isn’t small but it’s not huge either. I also swapped the pads, which I will mention in a moment. 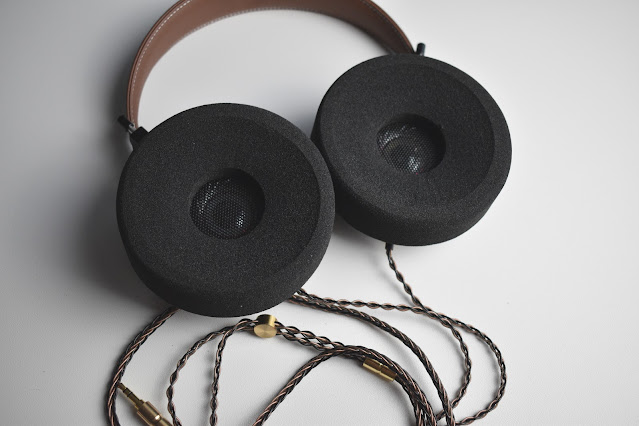 So, how does a 40€ imitation Grado sound? How does it compare to something like the SR60e or Sr80e?

I’m afraid I can’t answer that. Although I keep meaning to pick up a set of SR80e to have them as a reference as they are so popular in certain circles, I haven’t actually heard a Grado headphone.

What I am hearing from the OH2000 does sound like many of the non-Grado lovers describe the Grado sound, however, I have no idea if it is similar or not. Maybe I will have to get my hands on some Grados soon.

So, I am just going to give you my subjective descriptions of the sound, according to my tastes, and if I ever get my hands on some SR60/80e, I will compare them then.

Out of the box (erm, envelope) I did not like the sound. Yes, I did do 167.32 hours burn in before listening to them, just to clear that up. They sounded harsh and lacked bass in a big way.

I swapped the installed S-Cushion type pads for the G-Cushions and things didn’t get much better. The sound was still harsh and to be honest, I didn’t really find either of the pads very comfortable. I decided to go online and find some recommended pads for the SR line and ended up purchasing the Geekria G-Cush pads, which arrived the next day.

With the new pads, the bass is slightly more present (and comfort is improved), but there is still no sign of sub-bass, making tracks like “Royals” or “No Mercy” sound hollow on the low end.

The normal bass areas are acceptable but not great. While listening to tracks that are instrumental with decent bass, such as the intro of “Jack Of Speed” by Steely Dan, the bass sounds acceptable but when other higher ranged instruments and voices kick in, the bass is easily overshadowed and things start getting harsh.

There is certainly no bleed into the lower mids but the mids still give the impression of being recessed on the lower end of things due to the elevated higher mids. In acapella songs, with male vocals like “These Bones” by The Fairfield Four, the voices actually sound clean and fairly realistic, but when backed by instruments such as electric guitars and especially brass instruments, voices go back to sounding recessed. In the case of female vocals, they show the harshness much more.

In the higher mids things start to get a little too elevated, creating the harshness I mention, and moving into the treble areas, sibilance raises its head. As usual, I tested with “Code Cool” and every “S” in the song is sibilant and Patricia Barber’s voice is just harsh in general.

One thing I can’t complain about is the air in the higher ranges. There is no sensation of roll off and things seem to be well extended, at least to the extent of my hearing.

So, so far, I am obviously not a fan of the sound. Then came EQ.

I have to say that EQ managed to “fix” these headphones pretty easily. They are still not perfect as I have not really spent hours tweaking them but a quick couple of tweaks turned these headphones into something that I can quite easily listen to. Again, it does need some tweaking and refining but I have no doubt that with some time and effort, these headphones could actually sound pretty good.

I don’t usually share EQ settings but my quick EQ tweaks were: 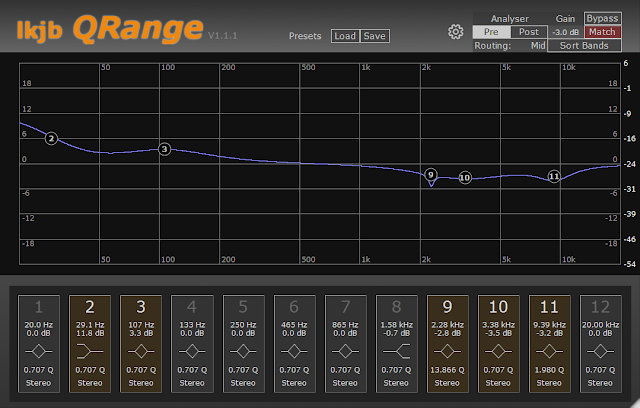 Again, these are quick adjustments and are far from what I think these headphones could do with some more time and effort.

With the above EQ settings applied, there is enough bass for my liking, enough warmth in the low end and while the higher end needs more tweaking, the harshness is reduced a lot with sibilance becoming ocasional rather than a permanent battle.

Actually, at first I tried the Harman Target EQ from Oratory but I did not like the outcome at all, so I just went back to a blank page and did some quick tweaks.

While the low shelf is hilariously elevated, at 11.8dB, the natural roll off of the driver counteracts this and the result is actually quite pleasurable, although it will still not be something to listen to EDM on.

As far as details, these headphones are actually quite good. Obviously they are miles behind something like an Ananda but they are far more detailed than something like the K371 that I reviewed recently, which is quite a compliment considering the price and the included goodies.

Soundstage is also wide and the placement of images is pretty decent, not spectacular, but pretty decent nonetheless. Binaural recordings are enjoyable and while these are not the headphones that have best represented Yosi Horikawa’s work, they do hold their own. 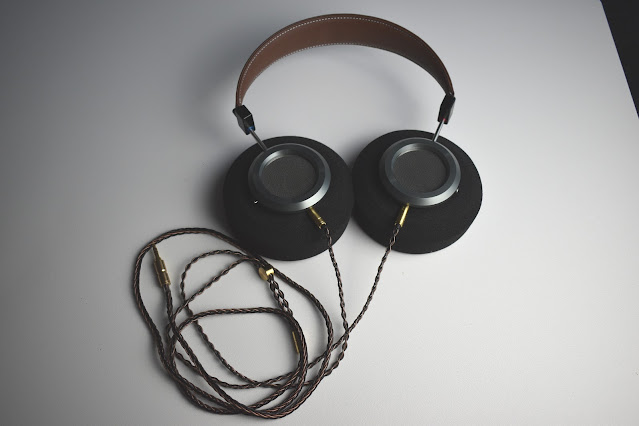 I will revert back to what I said about being a Grado Modders dream. If you are someone who is interested in modding a set of Grados, you get a ton of useful stuff for a price that is much cheaper than many of the kits I have seen online. The parts are of good quality and are easy to work with.

For their own merits, as far as sound, I would say that without EQ these are a no go, at least for me. With EQ, they are certainly not going to replace any of my permanent collection, but they do respond well to EQ and I can see them being something that I would use on occasions when I want the sound I have managed to tweak out of them.

I am sorry that I can’t compare them to Grados as I think that would be the most relevant comparison, maybe in a not too distant future.

For now, I would say that they are worth their price tag but only if you are not planning on using them as they come.

Hmmm. Not bad, if a bit rolled off in the bottom octave...
I mean I guess you don't have Grados so you couldn't say, but if anyone has these... Are the gimbals the right size to fit a Grado earcup? Or have they made it larger to fit their own housings?