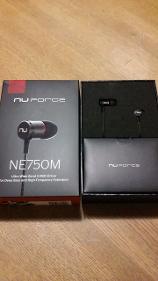 The NuForce NE750 is the sibling of the NE800m. Both based on the Titanium coated 8.6mm diaphragm with a housing made of light weight aluminum. Frequency response of 20 Hz- 20 KHz, impedance of 16 Ohms and 113 db sensitivity. I was given a review sample for my take on these earphones as well as the NE800m.

Both earphones have basically the same type of build and the same included case and tips with the NE800m having some extras in the way of 2 pairs of Comply tips. As far as included accessories goes. It is pretty standard fare. The small coin purse like included case is a bit on the small as it is barely big enough to carry the earphones and some extra tips. Tips choice are your standard silicone 2 small, 2 medium and 2 large tips that I have never once used during this entire process of analyzing the sound of these earphones.

( A small note to all manufacturers. Include some large bore tips with your earphones always. Large bore tips always expand the sound of the intended sound and does not restrict the sound like many of the standard included tips do. Tips do make a difference for your earphones.  More variety the better in my honest opinion when it comes to tips.)

Isolation on both earphones are decent enough with music that drown out a good 70-80% of street noise. So passive isolation is above average. This with the included mic that I have used for phone calls on my Android phone works great when needed. The cord on both the phones are exactly the same. Both have a sweat proof/water proof coating that is a bit rubbery and soft at the same time. It does cause a bit of a noodling I like to call it but not terrible.  I read some of the online reviews complaining about the build of these earphones and I have to say I kinda agree with some of them. But then again I treat each earphone I have be it cheapos to more expensive ones with the utmost care. I have never in my life broke an earphone. I can see how if one was not so careful the cord could potentially snap and or cause a short.

Onto the Ne750m. It has taken me a while to come around to the new NuForce phones as both of these earphones come to you absolutely raw and sound like it from the get go. I mentioned on the Ne800m thread about how much these need a burn in and this turned out to be true for both earphones. Though for some reason the Ne750 actually sounded much better from open listen than the Ne800m.


SOUND:
Both these earphones have a street tuning,  Both lean more toward a consumer friendly sound signature with more than enough technical ability to make your music sound complete and full from any source your using them from. I don't know about you guys but I kinda prefer having a bigger bolder sound when out and about. I don't listen to classical or most of my jazz when out. I am more metal, rock, pop, edm, vocal and hip hop listening when out and about so these earphones fit perfectly for the type of music I listen to when out in public.

Street tuning means they have emphasized bass. But then again I have never heard a NuForce earphone that didn't have an emphasis on the low notes. The Primo 8 comes the closest to an true audiophile grade sound these guys have made but even then the house sound comes through with them having plenty of solid quality bass. These are no exception. The Ne800m having a bit more lush and fuller sound with a bit more definition than the Ne750 overall and does make them a bit higher end in the sound corner. The Ne750 however in my opinion is actually the better value.

Here is why. Both again have a similar big sound but the Ne750 is the less colored of the two earphones. In fact one of the experiments that I did when I had both of these earphones on constant burn in mode was which one was I grabbing to listen to most. It was believe it or not the Ne750m.

The Ne750 in comparison to the Ne800 has a bit lesser bass emphasis. If I was a guessing man I would say roughly 5db bass boost vs the 7dbs or so on the Ne800. There fore sounds a bit more balanced overall. The treble also has just a bit more emphasis further balancing the sound of the Ne750 over it's bigger brother the Ne800.

Both these earphones do not have anything fatiguing as far as sound goes. Well that is unless you are not a fan of full bodied bass. I would say these are not bass headphones but with a few dbs tweek on the low end or the first click of bass boost on your portable amp. These can easily head there. Especially the NE800m. They both hit them low notes with solid impact reaches deep with authority. Bass quality is solid with the Ne750 sounding a touch bit faster than the Ne800 due to the lesser emphasis in the mid bass region.

The mids of these phones are done very well with the Ne800 having some of the best mids in the business for dynamic earphones. The instrument and vocal projection on them phones can sound holographic. The Ne750 while it does not have that same lush projection of the brother actually has very good depth, positioning of sound for instruments and vocals. Overall the mids are balanced very well on both earphones and take just a small step back from the bass emphasis.  The mids of both phones are where I find NuForce truly shine. Even the old Ne700 had some of the better mids for single dynamics. The sound stage of both phones are similar in that they have an  average width of sound but has very good depth of sound which helps with that fuller sound these project.

Both female and male vocals sound complete with male vocals showing a touch more dynamic range over female vocals which could be due to the slight lower mid emphasis of these phones. Vocals in general sound smooth organic and overall the way these Ne750s are tuned does not have any sibilance of any type. Where the Ne750 sound a touch better for my ears over the Ne850 is in the treble area.  Don't know if it is materials coming through but I found the treble of the Ne750m to have a touch more sparkle and a bit more emphasis over the Ne800 again making them sound a touch more balanced over the bigger brother. A bit more agile in sound, better balanced and overall just as engaging so the value of the Ne750m makes them a winner over the Ne800m.

In the END
Amazon has these for $82. At this price I think these are very competitive in their price range, sound great for their intended use and has the type of sound that let you enjoy your music on the go with decent isolation and a mic. For guys that didn't like how the Dunu Titan 1s have poor isolation. These might be your answer. These might not be the phones you grab when you want to kick it at your desktop but they do a heck of a job out and about.

Thanks to Jyri for his infinite patience with the burn in process and for these review samples.

ianeith
I agree with this review; these are also on par with some Sony offerings, e.g.: the XBA-H2.

Thomas Ernst P
I have the NE750M for about a week a now and the sound is very satisfying. What is not are the cables ! On the right side at he strain relief the rubber is changing its consistence as if ther is an air bubble between the rubber and the Kevlar threaded wire. Also its extremely soft now without any strenght as the rest of the cable. I hope it's just cosmetic and it's not breaking.