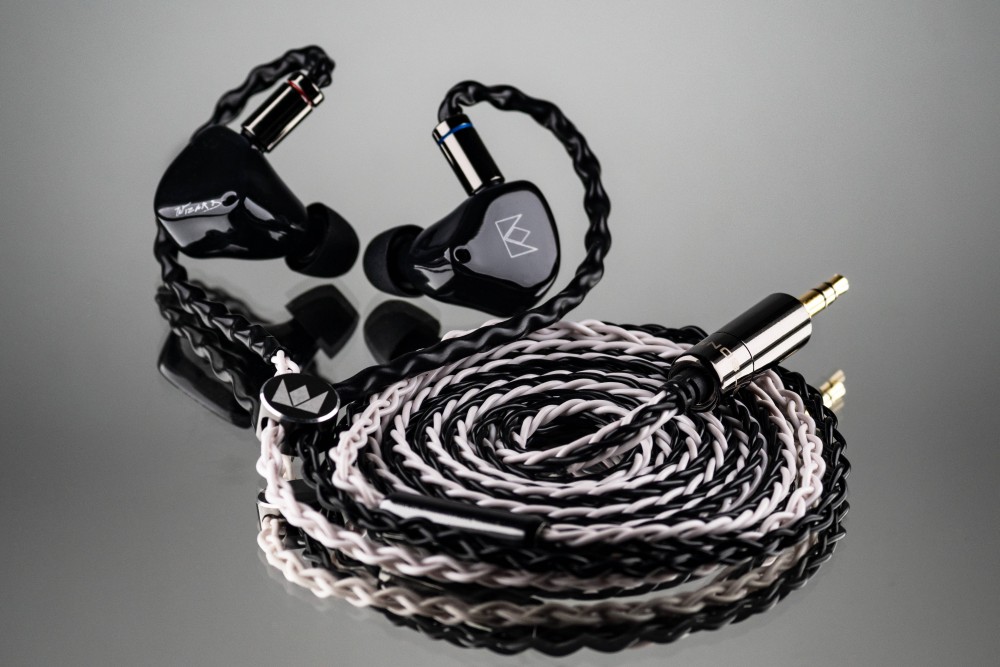 Balanced should be a no cost option at this price point 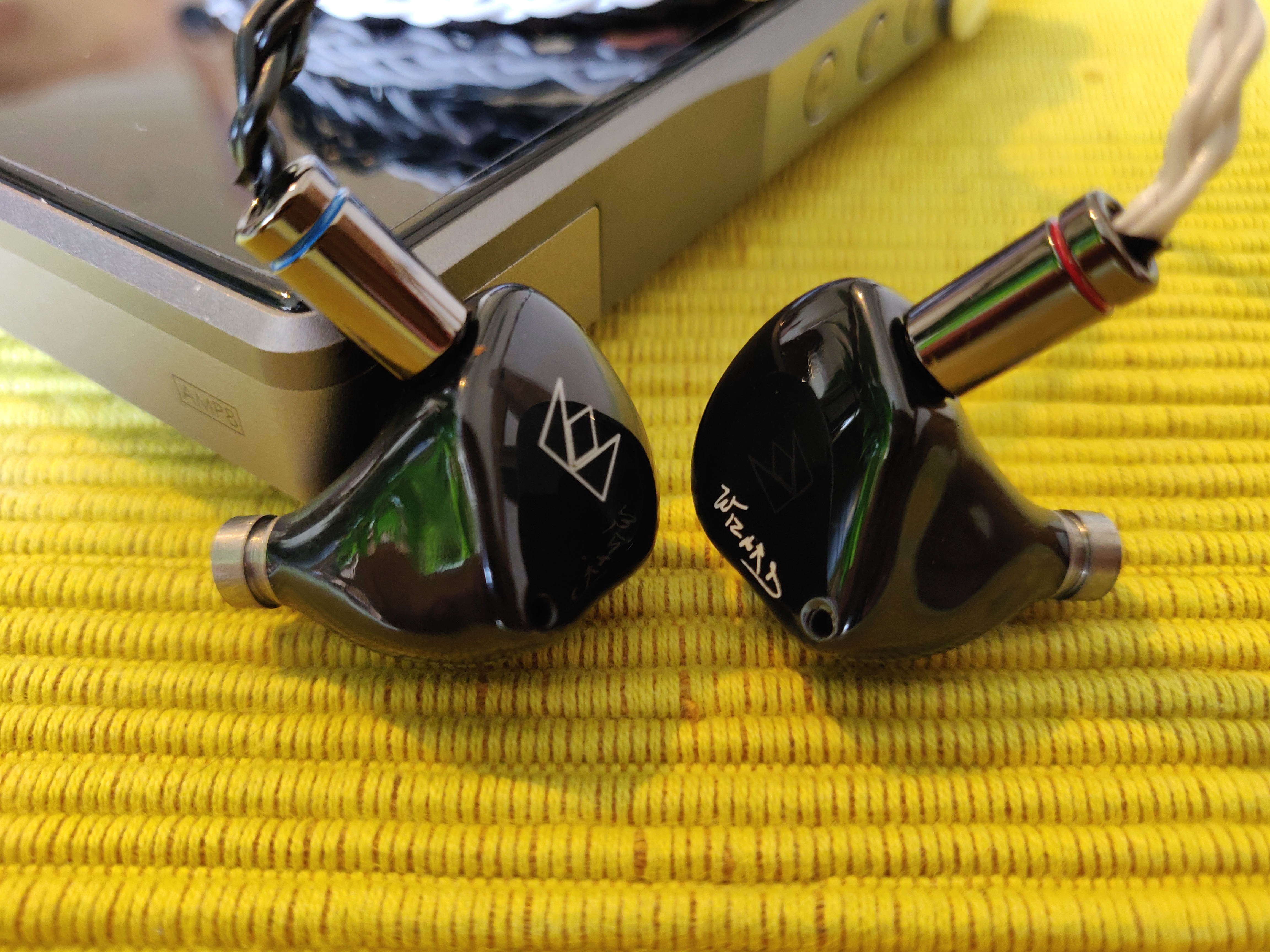 Unboxing and Contents​
A sleek gloss black box with a bold Noble logo and the model name. Inside, there is a Pelican 1010 case in a matching gloss black. In addition, there are the usual Noble rubber bands, various pairs of silicone and foam tips, the earpieces themselves and a liveried black and white 8 core copper cable which can be specified as single ended or balanced (for an extra charge). 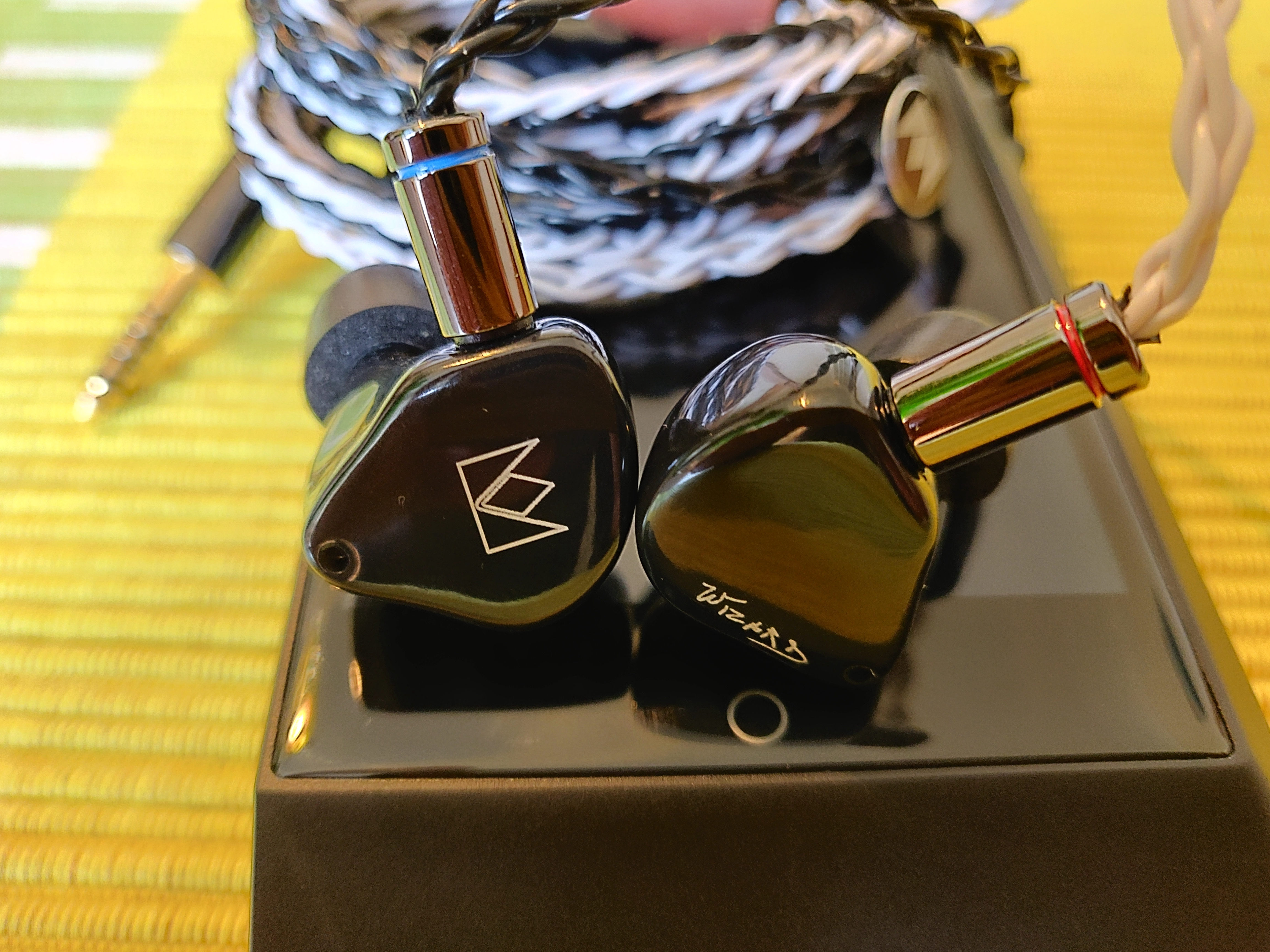 Design and Fit​
The earpieces themselves are rather unassuming – smaller than say, a pair of Empire Ears universals with the Noble logo on the left faceplate and the Wizard moniker on the right. They fit very well for me and soon disappear from my awareness. There is a small port at the apex of each earpiece. The serial numbers are in red and blue for right and left respectively which is a nice touch. The nozzle is steel with a flange and grille. Behind this I can see 2 asymmetrical ports. The 0.78mm 2 pin ports are recessed - some right angle 2 pin cables may not insert deeply enough.

The cable is an 8-core round braid in black and white with formed earguides. The connectors, splitter and jack are gunmetal grey. After the split, the left wires are black and the right are white. Again, a harmonic design that echoes the model name. I await further detail concerning the materials and construction of this cable from Noble.

I used the supplied foam tips and my own Spinfit CP240 biflange and generic large triflange silicone tips. I removed the earguide heatshrink as it would not allow a comfortable fit for me. 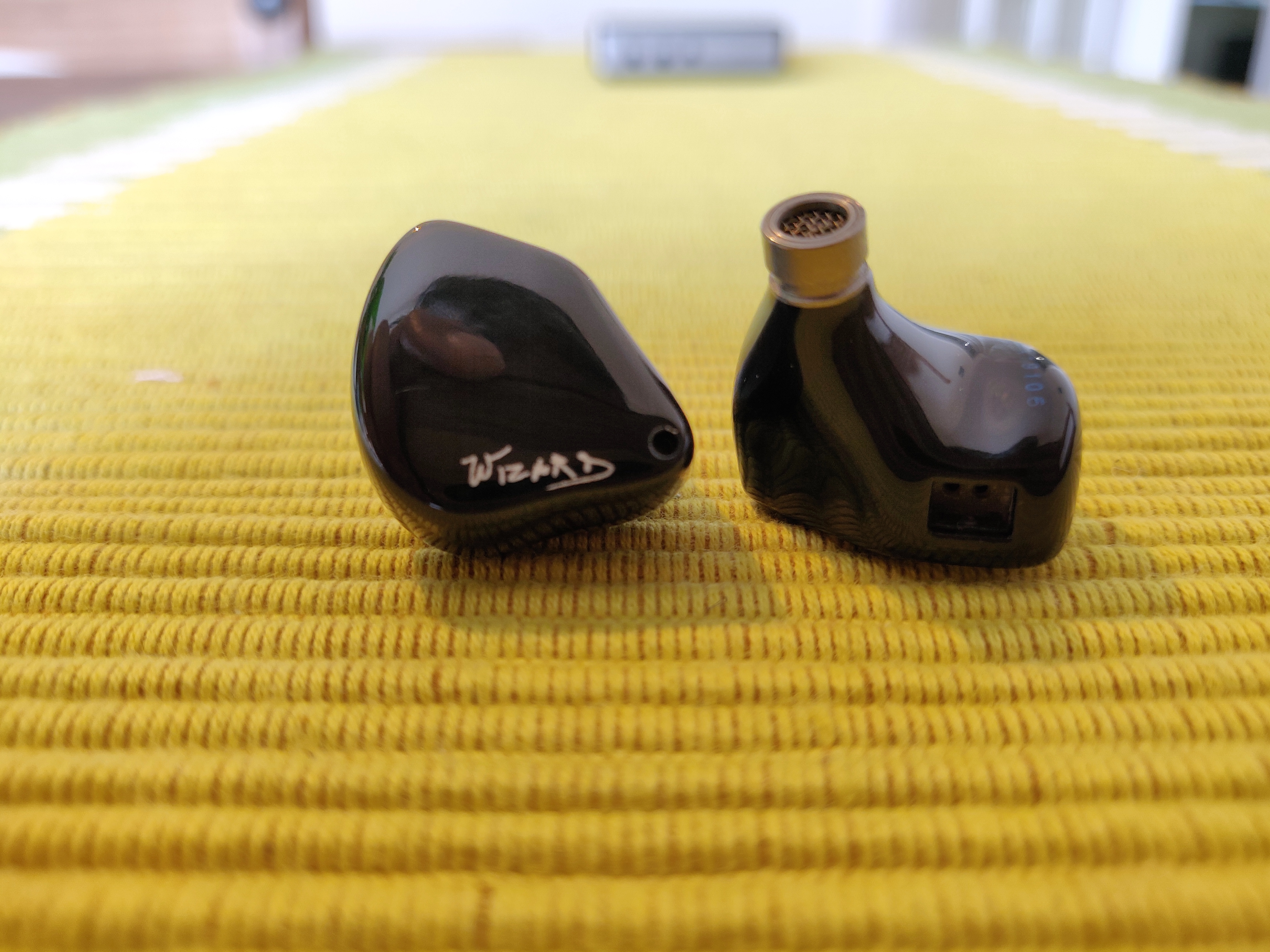 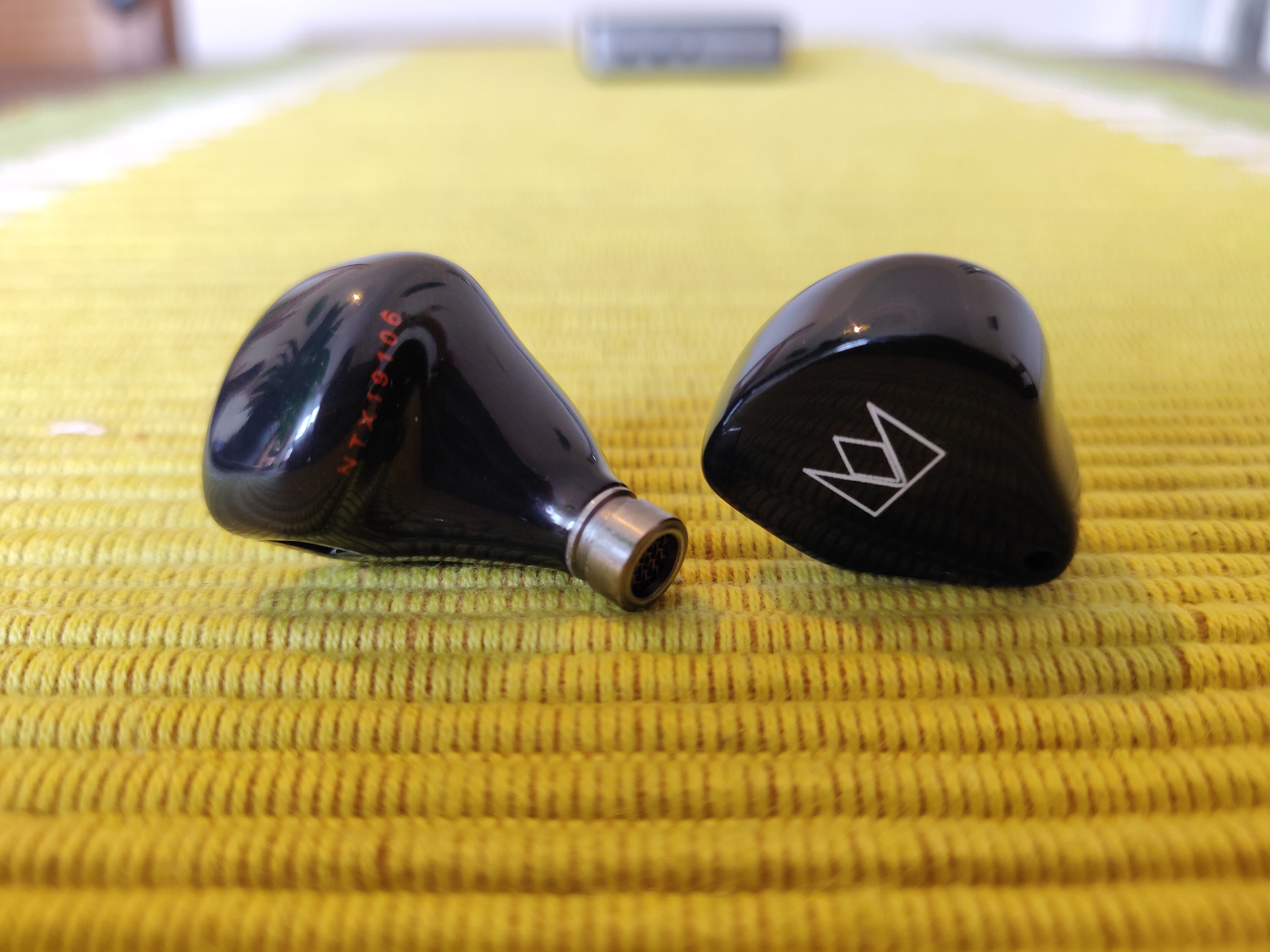 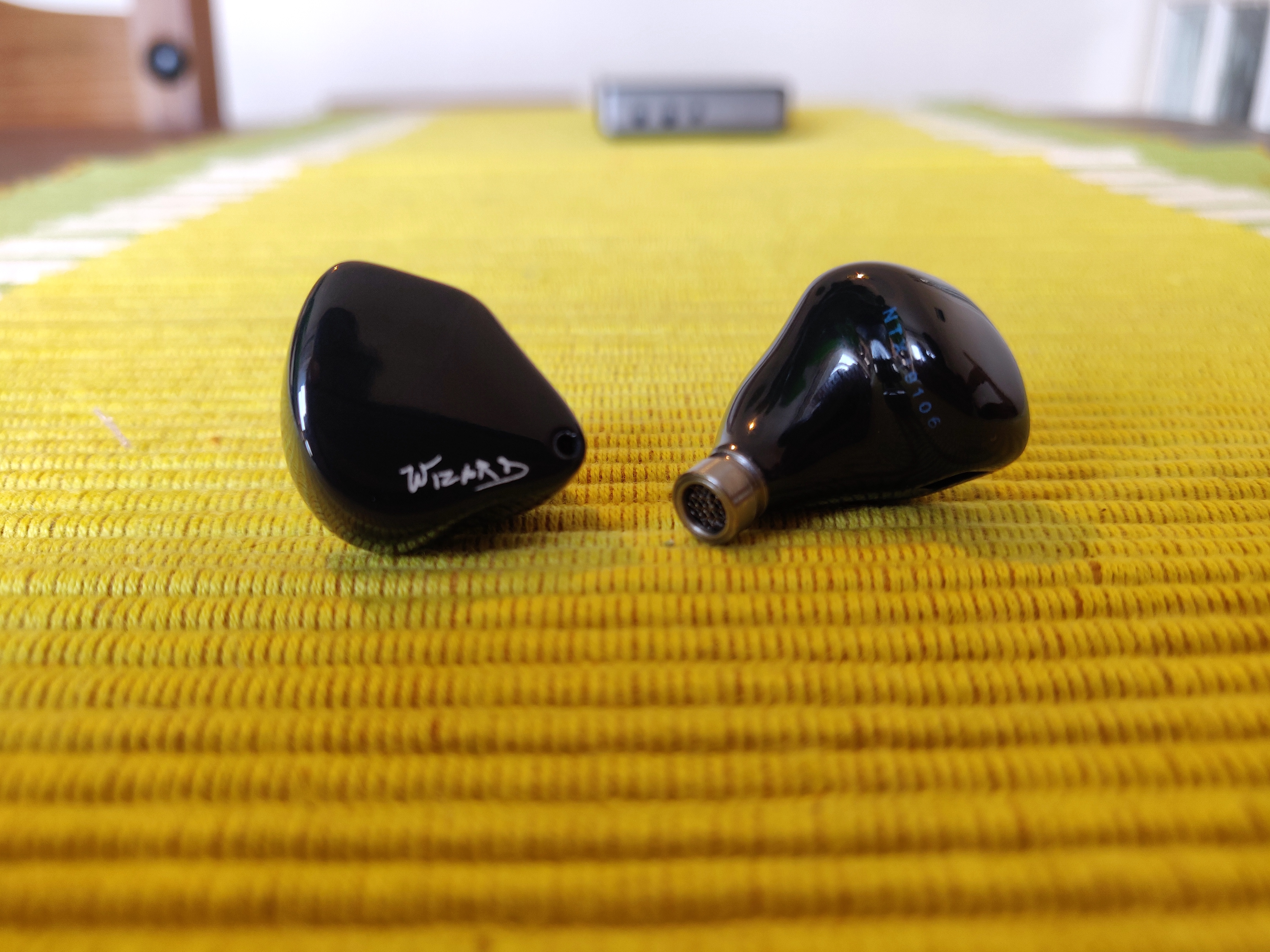 The DX220 and the Tux5 themselves are mine. They are not review samples or loans. The N6ii and modules were loan units on a review Tour. 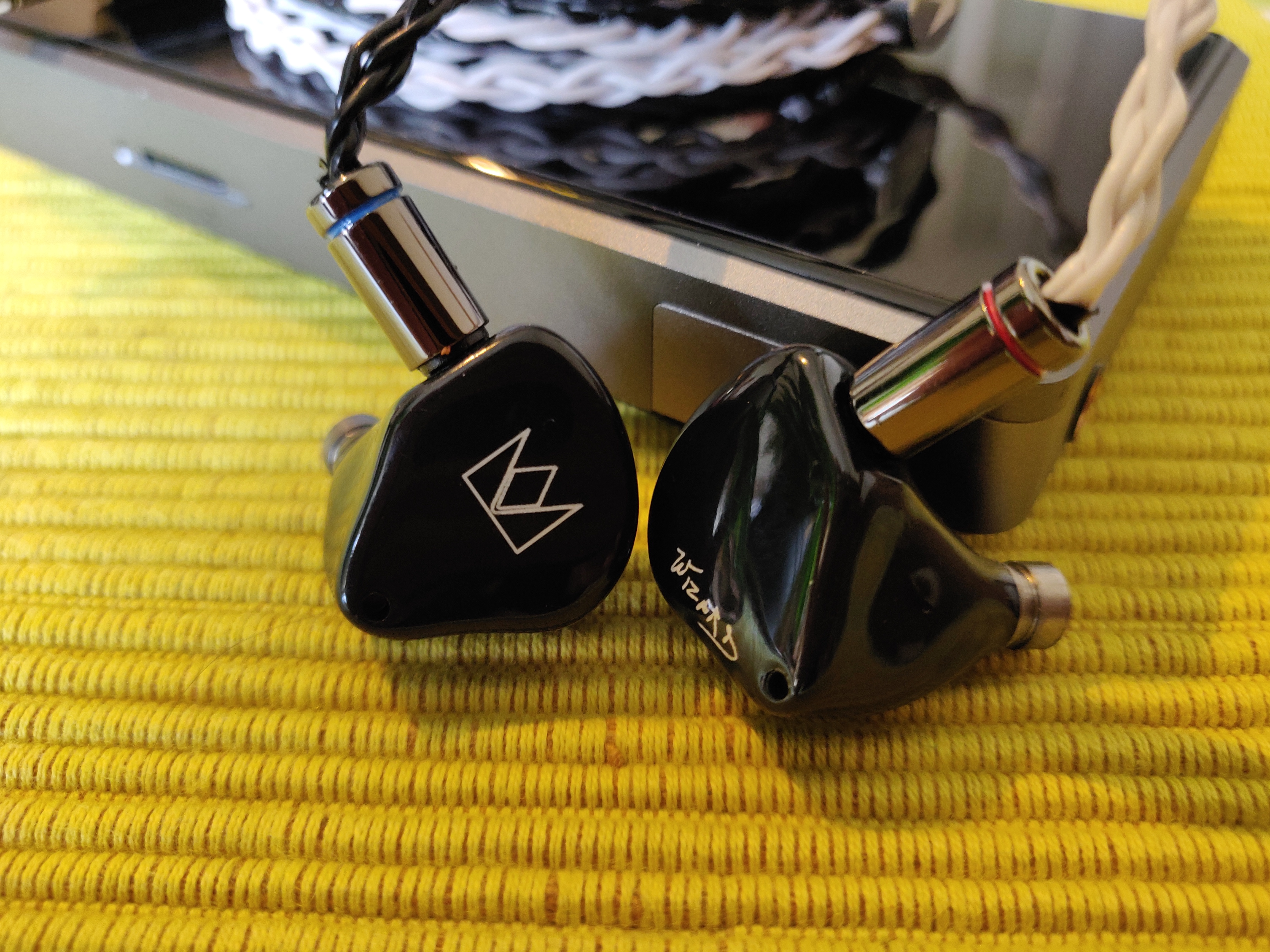 DX228 Sound​
Across the 4 cables I used, the sound profile is most definitely V-shaped; a profound sub-bass, recessed mids and a clear treble. Male voices are a little thin and female voices lack a roundedness as a result. The stock cable exchanges note texture for note depth across the frequency range – it is deep, warm, pleasant and rhythmic, if a little laidback. I get the feeling much more is possible. The Ares tilts and flattens the response around a midrange fulcrum – there is reduced sub-bass but a welcome increase in mid bass and overall note texture. The mids are less recessed, the highs clearer but not shrill. Overall there is increased definition and separation. The EAC exaggerated the V-profile to a point where it just became weird – deep but unfocused bass, separated mids and warm highs. The SPC is a surprisingly harmonious partner – overall the timbre is more neutral but there is still real weight to the bass, a crisp snap to the percussion and transients with a more natural sounding, if still slightly recessed midrange. There is a slightly wider soundstage than the stock cable. 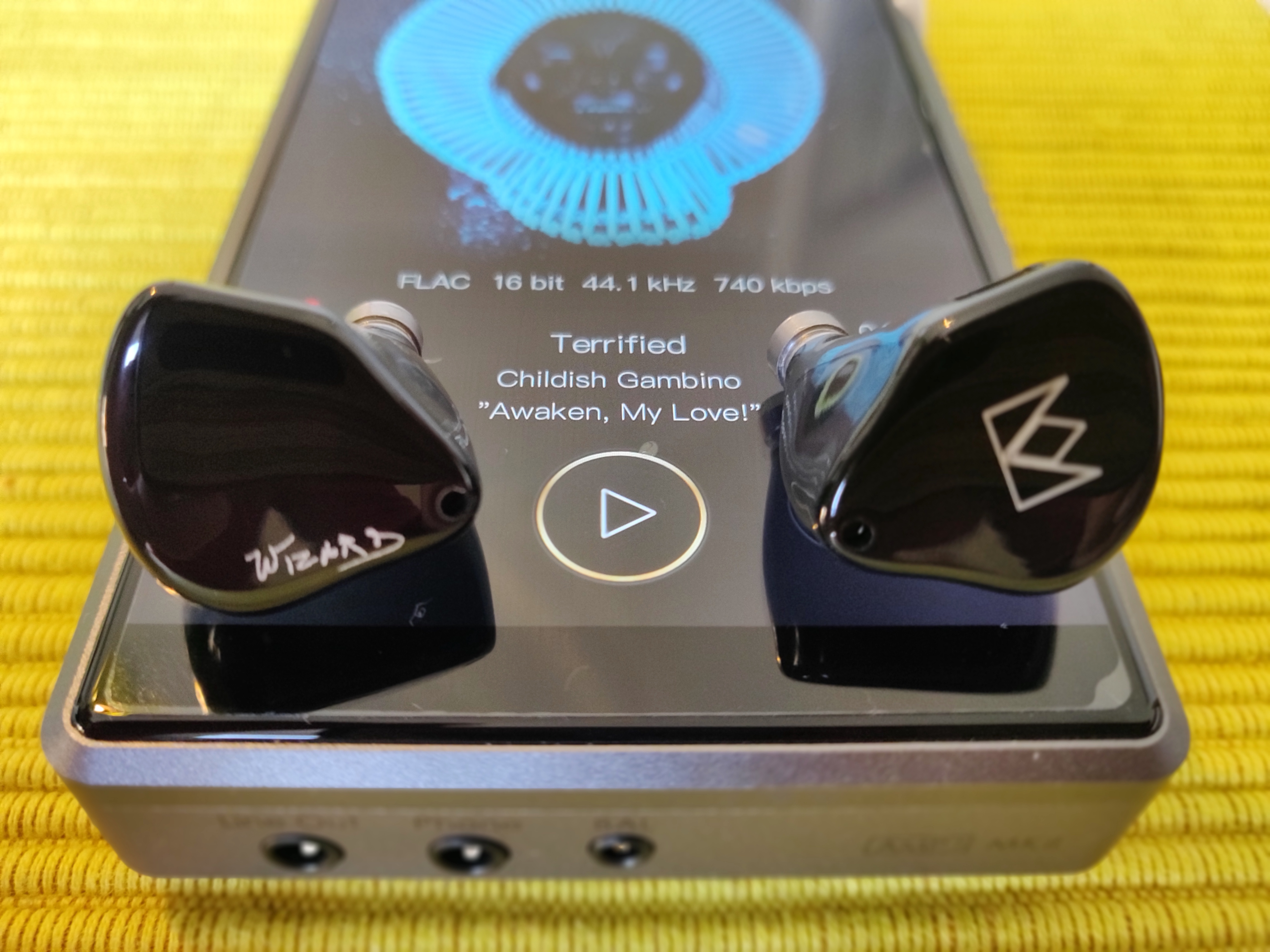 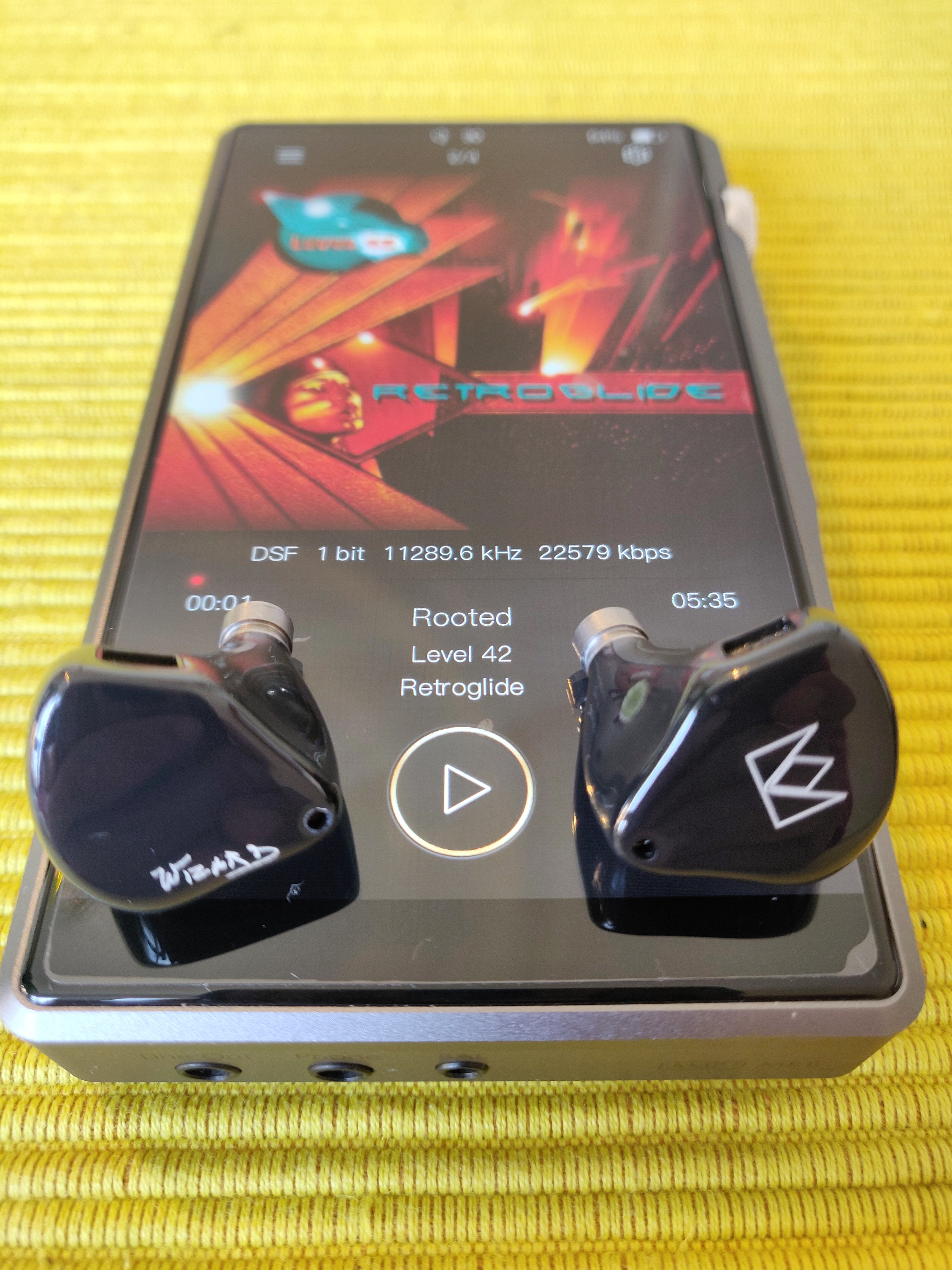 DX221 Sound:​
The AMP1 has a more midcentric sound which I thought might leaven the V shaped profile of the Tux5 (TuxV?). The sound became relatively balanced across all the cables I tried but still preserving the different colourations. The exception was the hybrid, which performed really well and was a combination of the bass of the stock with the details and clarity of the Ares.
The sound also became more evenly toned, without the extremes of sub-bass that can overwhelm the rest of the spectrum. Voices became warmer and more natural. I prefer this over AMP8, which is unusual as AMP8 is my daily driver (until my AMP8EX arrives, anyway). 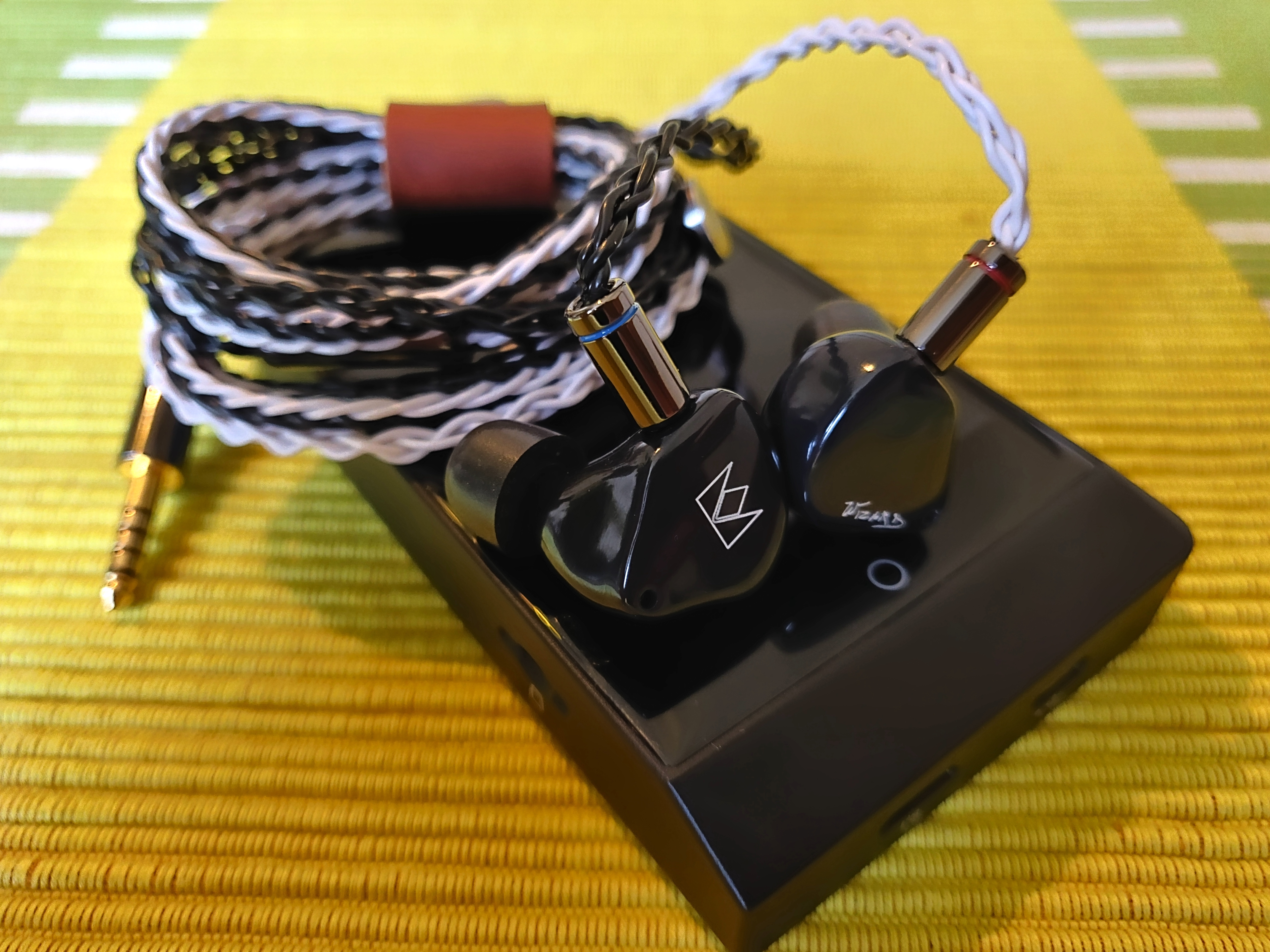 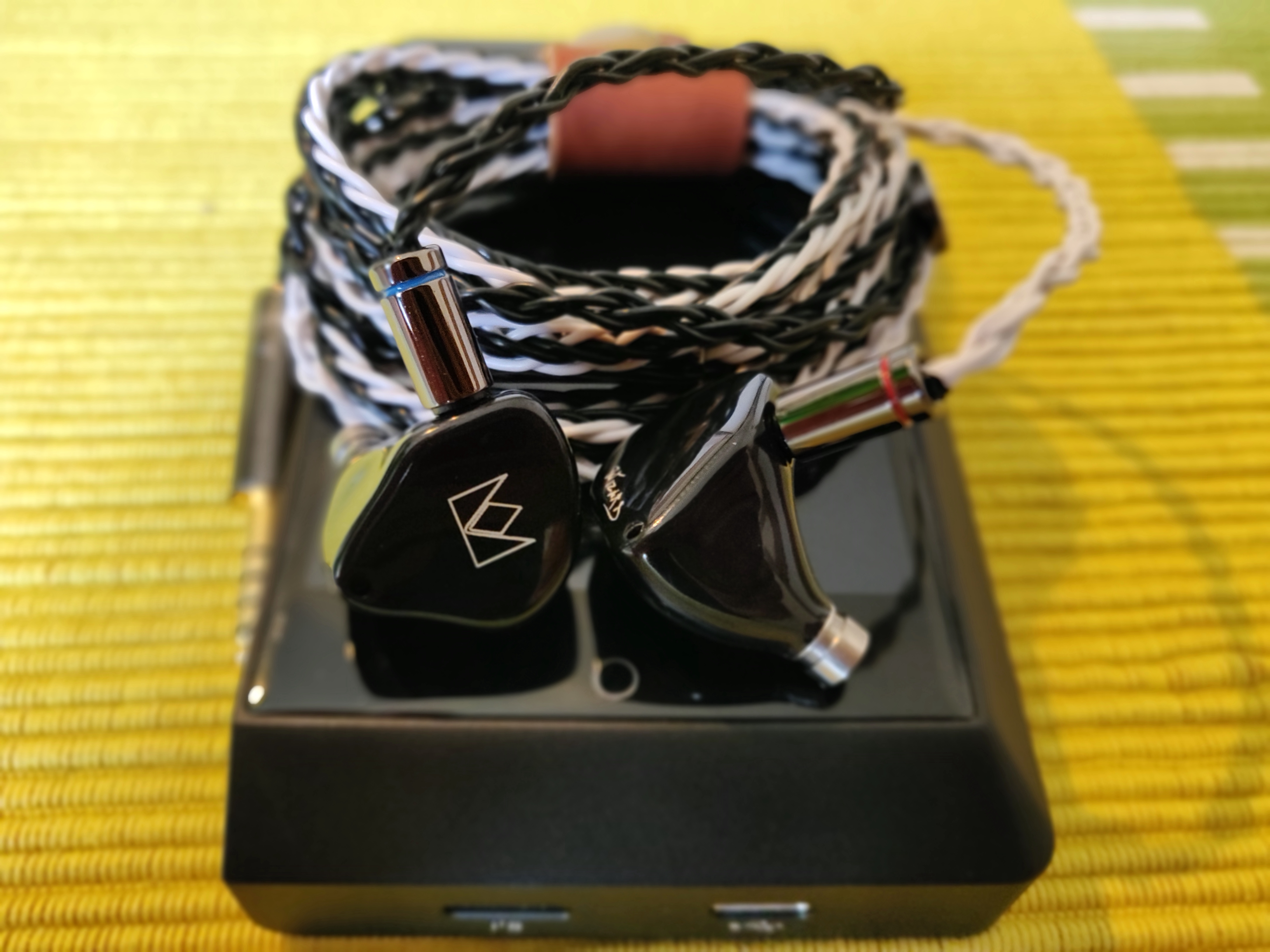 N6ii Sound​
The A01 module gave a slightly warmer sound overall – still allowing the cable rolling to affect the sound profile but with an enjoyably smooth veneer. Bass is subterranean when called for and possesses a visceral kick. The highs remain clear and natural. There is excellent separation and definition across the frequency range.
The T01 module was a little more mid focused with a wider soundstage; the sub-bass is still mightily present but more focused and quicker than the A01.


Pairing Suggestions​
DX220: AMP1 with any cable according to your preference for sub-bass, extension or detail.
N6ii: Stock cable – preserves the rich bass and sweet treble. 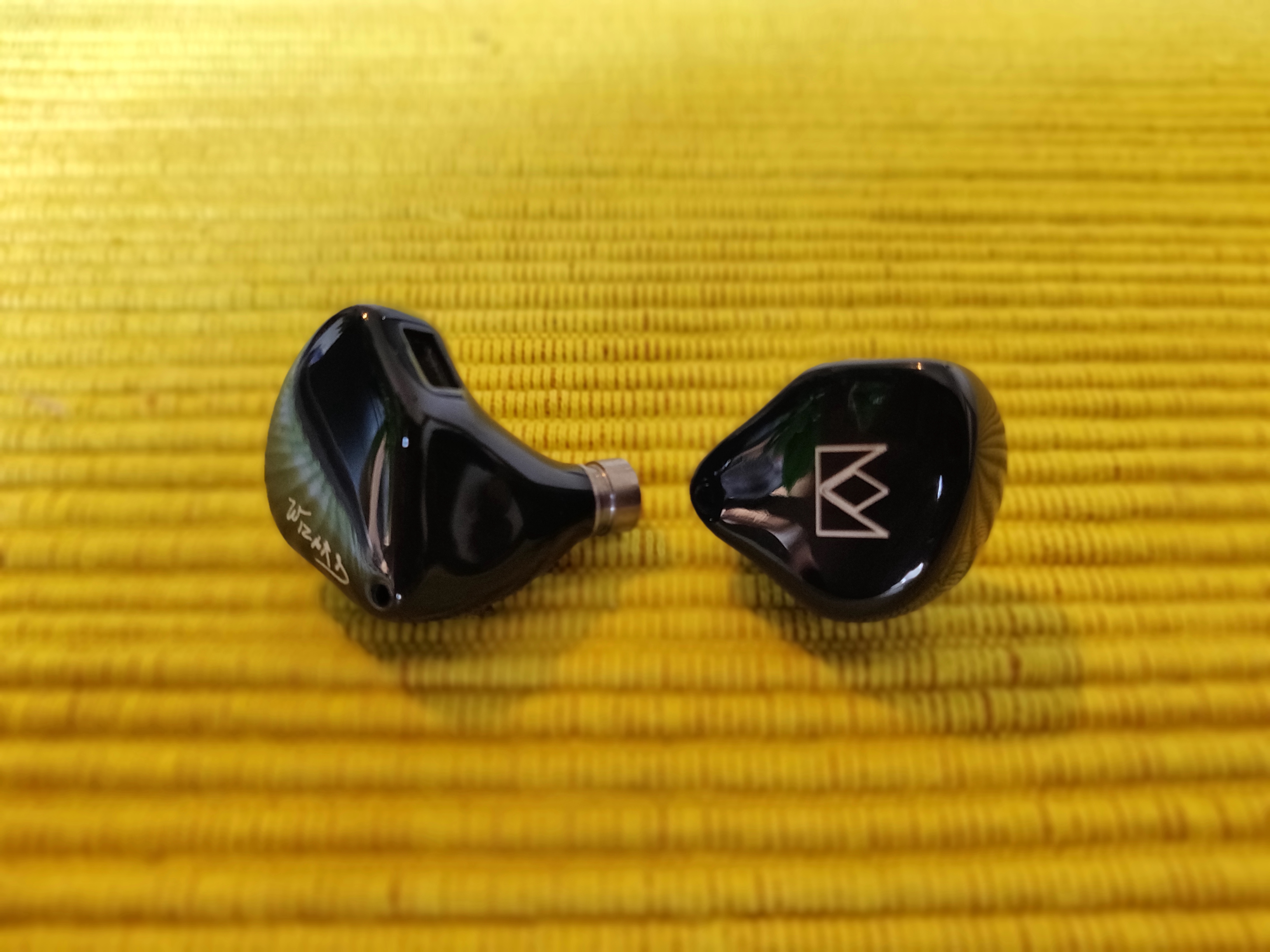 Conclusion​
The Tux5 is a clean-shaven brute dressed in a dinner jacket. The N6ii is a good fit with either the stock or T01 modules. I was a little concerned with the 2-trick pony impression of the AMP8 pairing as I couldn’t match a cable to find the exact sound I wanted.

I felt menaced by this brooding lout. Once AMP1 was plugged in it was a different story – the sound became more even but retained power and detail. My lapels were dropped and smoothed off. All was well. Brothers in arms, our journey continues.

mvvRAZ
So was I, I kinda liked the Khan but I felt it had quite a lot of issues in its tonality and build - the Tux5 could’ve been legitimately a better Khan at half the price

Oh well, guess it’s a pass from me

FullCircle
If you are looking for a more balanced sound signature, the katana, savant II and the savanna provide that.
Read more…