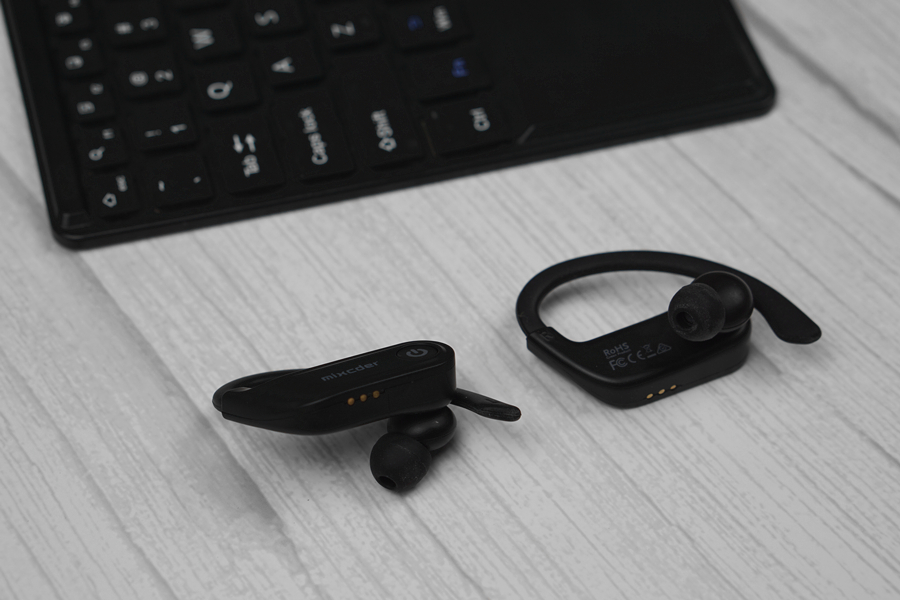 The Beats Powerbeats Pro drew a lot of attention when it was released last year, making many people believe that was the right design for true wireless earbuds. But fellow headphone makers don’t seem convinced enough, with almost no major brands releasing similarly-designed products. But Mixcder, a company known for making budget-friendly headphones, is one of the few exceptions. The new Mixcder T2 has a form factor similar to that of the Powerbeats Pro, but comes with a way more affordable price tag ($39.99). 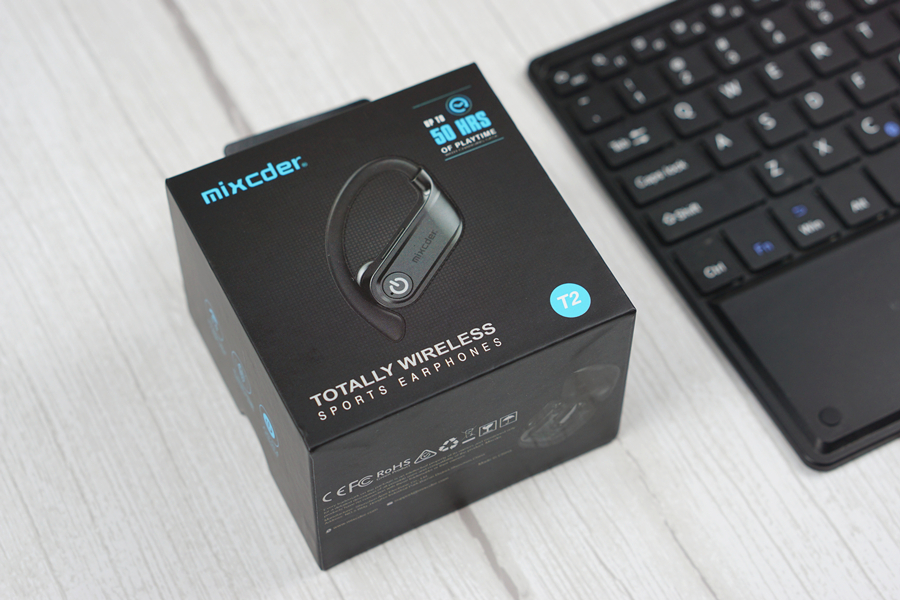 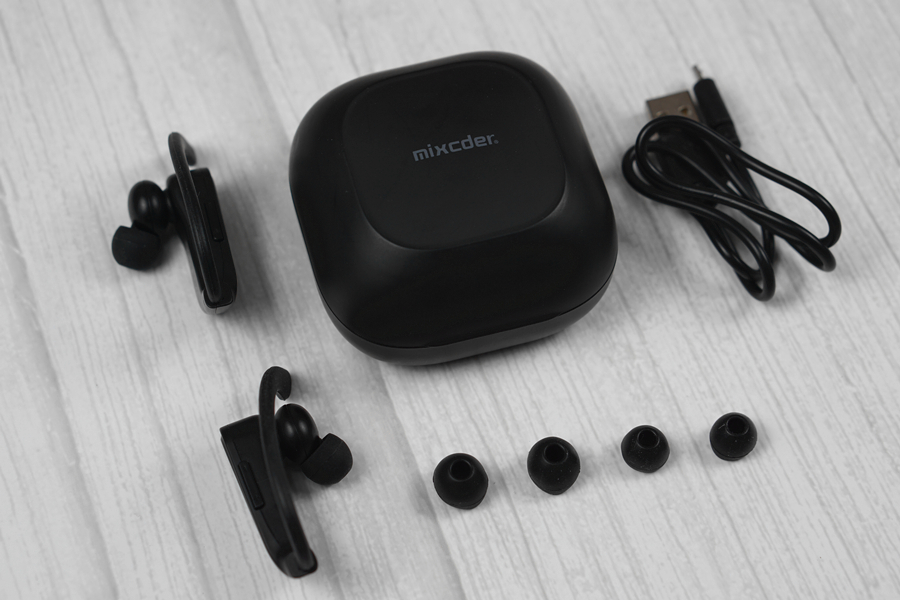 Inside the box you will find a relatively big charging case, a charging cable, a user manual and two extra eartips. The two earbuds are laying comfortably inside the charging case. 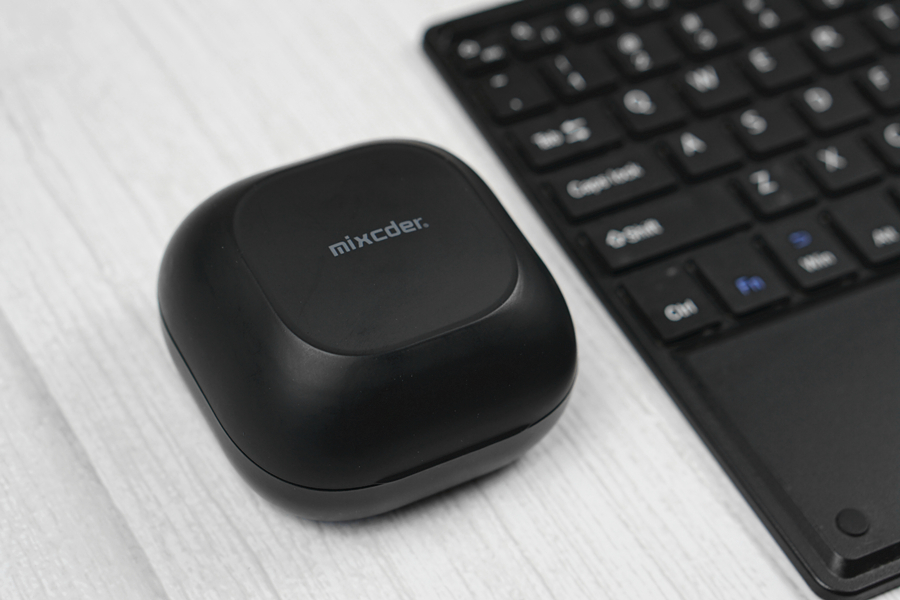 The charging case and earbuds are in black, and Mixcder offers no other color options for this model. The included charging case is a lot bulkier than the cases of the Jabra Elite 65T and the Astrotec S90 Pro. It has a flip-top design, similar to that of the Powerbeats Pro. Its matte black finish is resistant to catching unwanted fingerprints. 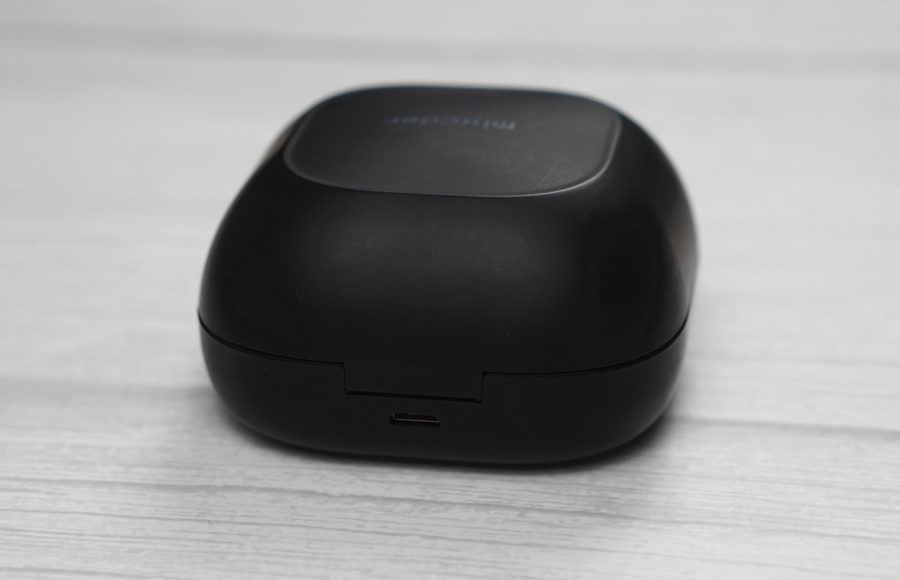 The rear panel of the case houses the uncovered Micro USB port, which is quite a shame, given most electronics are now carrying Type-C ports. 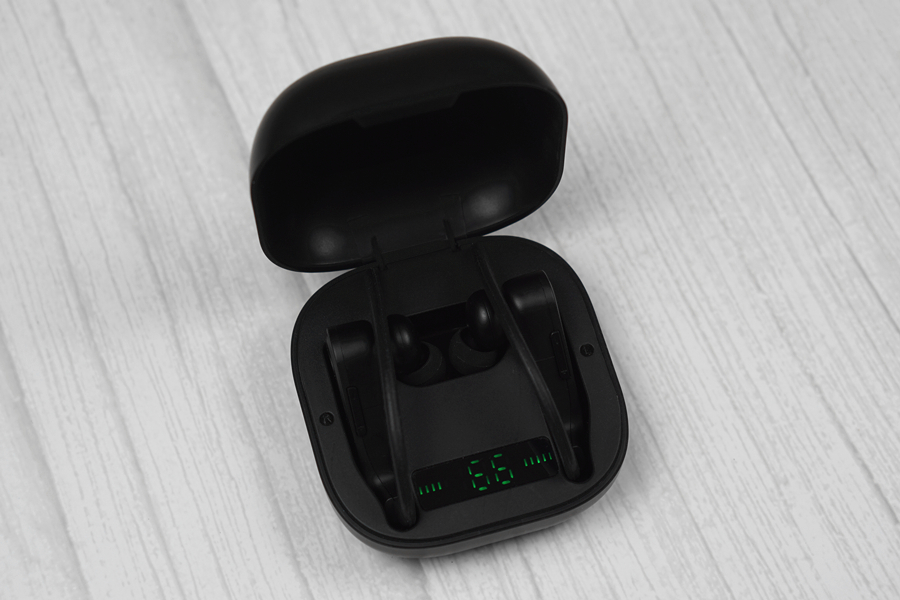 There’s a digital display inside the case to show you the percentage of battery left, as well as the charging status of each earbud. 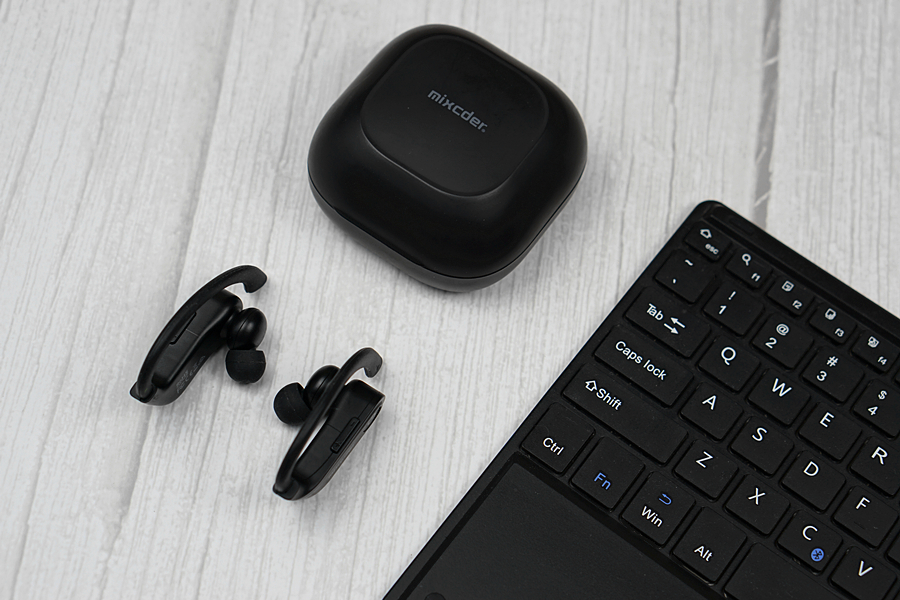 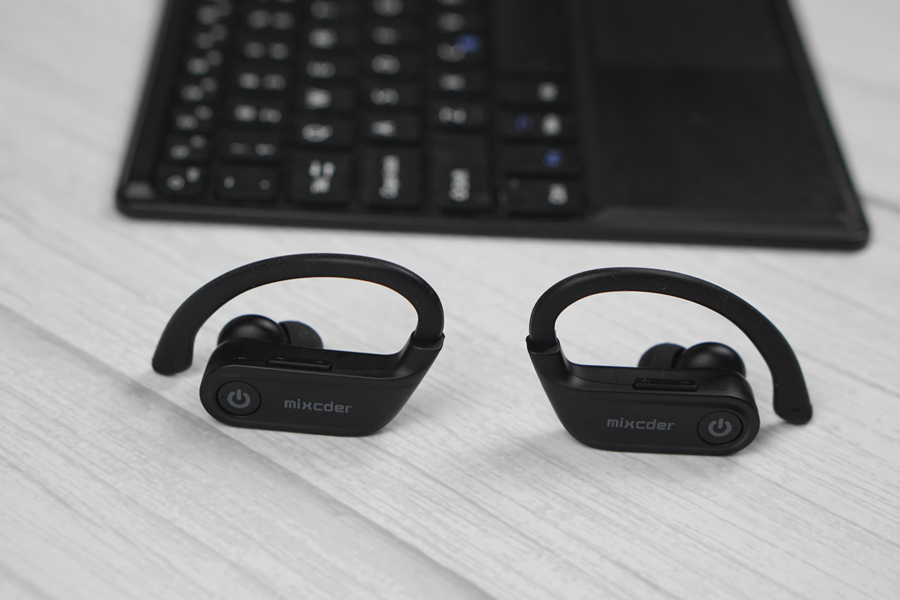 The earbuds may look like the Powerbeats Pro in overall shape and size, but there are still enough differences for us to distinguish the two. The Mixcder branding on the outer panel is definitely more intrusive than the famous “b” marking on Apple’s Powerbeats earbuds.

The cross bar which houses the battery and driver is relatively larger than normal in-ear buds, but it is integrated into the soft stem that curves up to go over and around the back of the ear. Therefore, the weight of an earbud is more evenly distributed to the ear canal and the back of the ear. 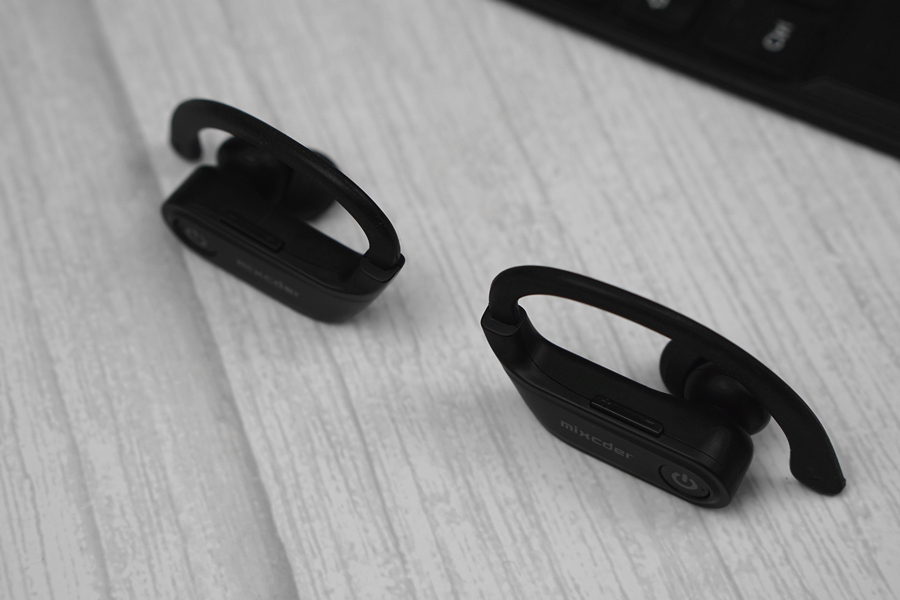 The on-ear controls are mirrored left and right, so there's no need to memorize what one ear does versus the other. There's a dedicated volume rocker along the top edge of each earpiece, and it's one of the easiest volume controls I've used on a true wireless pair. The power button on the outer panel of each ear actually offers multiple functions, it can play or pause music, and answer or end calls. Holding it for a few seconds wakes the smart assistant on your phone, be it Siri, Google Assistant or Bixby. Double-tapping it skips forward a track, and triple-tapping it skips backward. There's nothing missing here, and the simplicity and tactile response is excellent. 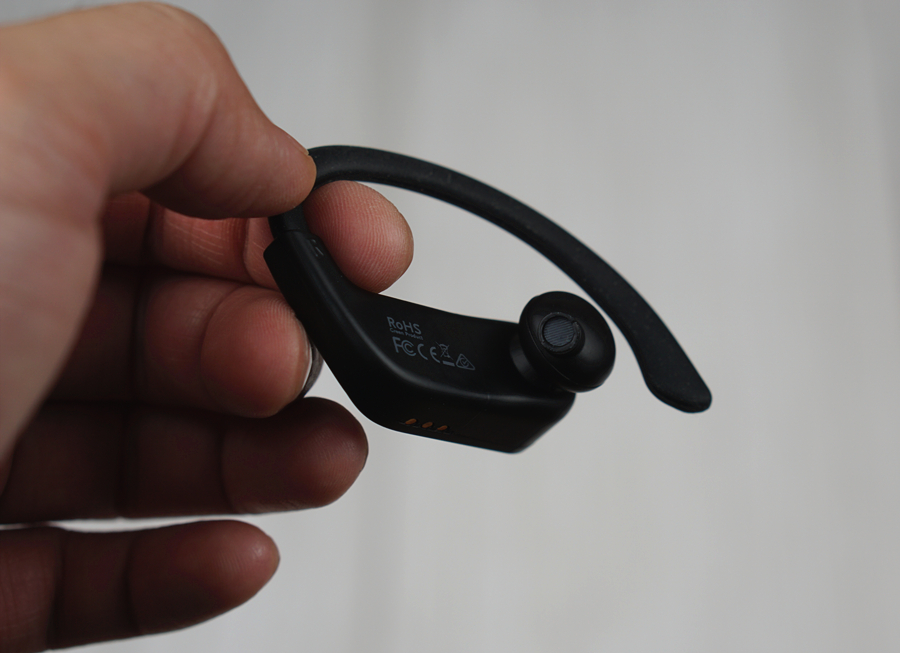 The Mixcder T2 has an IPX5 rating, higher than the IPX4 rating of the Powerbeats Pro. This means these earbuds can handle sweat, splashes and even heavy rains, but you shouldn't submerge them or wash them off in the sink. 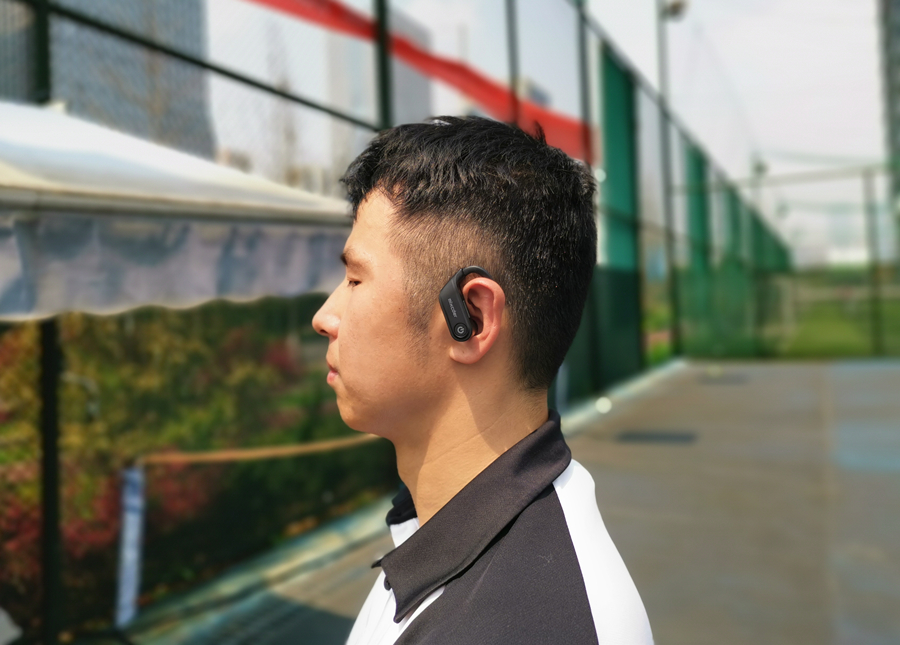 Seating the T2 earbuds into my ears was quite some task at first. They don’t have the simple shape of average true wireless earbuds such as the Creative Outlier Air and the Astrotec S90 Pro, so I have to pay a bit of attention getting them on and off. The advantageous difference from those “normal earbuds”, though, is that the over-ear hook can prevent the earbuds from falling out of the ears during intense workout. Also, the soft silicone ear tips come in 3 different sizes for customizable fit. The comfort of these earbuds are amazing, I can wear them for hours without experiencing fatigue.

The isolation on the T2 is better than that on the Apple Airpods, but not as good as it is on the Jabra 65T or the Creative Outlier Air. Better isolation means more immersive, undisturbed music experience in a noisy environment, but may result in higher risks when jogging on a country road, so it really comes down to personal preference. For those looking for a tight seal, you should probably look elsewhere. 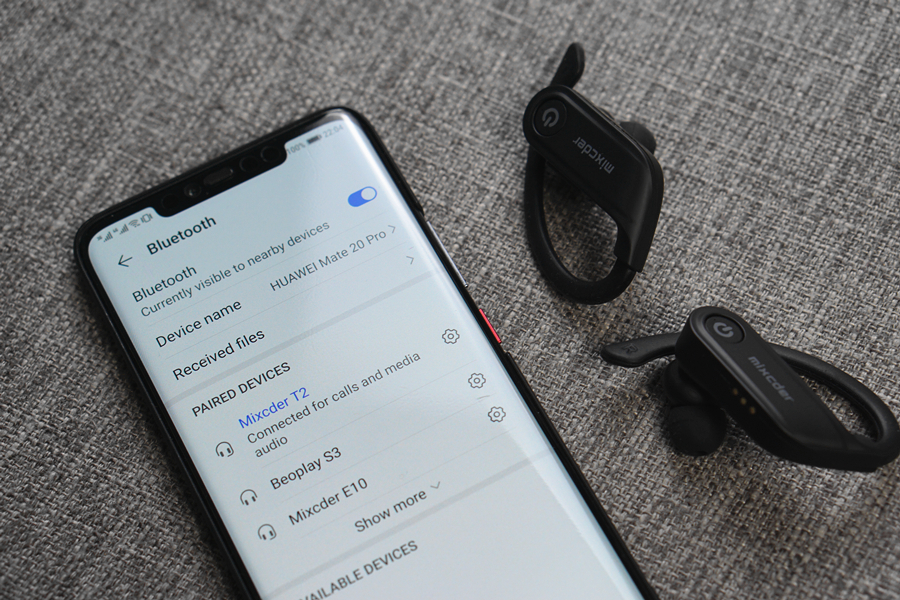 The Mixcder T2 comes with Bluetooth 5.0 and EDR (enhanced data rate), but only supports SBC codec. That is to say, there’re no AAC and aptX. Since they’re not powered by a Qualcomm SoC., you can also forget about True Wireless Plus support, too. The music has to be transferred from one earbud to another.

Fortunately, the connection between these earbuds and my smartphones is solid and stable. I paired the T2 to both my Huawei Mate 20 pro and Apple iPhone X, and listened to a lot of music in the one month after receiving them. The T2 seldomly lost connection with my phone, even though there were a couple of times one side wasn’t making sound, but the disturbance normally only last 1-2 seconds, not really a big problem, especially when compared to the Jabra’s Elite 65T, which often loses connection for more than 10 seconds.

Auto-play is another selling point of the T2. Sensors detect when you put the earbuds in and start playing music immediately. More and more headphones offer this feature nowadays, but I am not really that big of a fan. Sometimes I only put the T2 in my ears so I can watch some YouTube videos or make a phone call, but I need to pause the music first because there’s no way to disable the auto-play function. 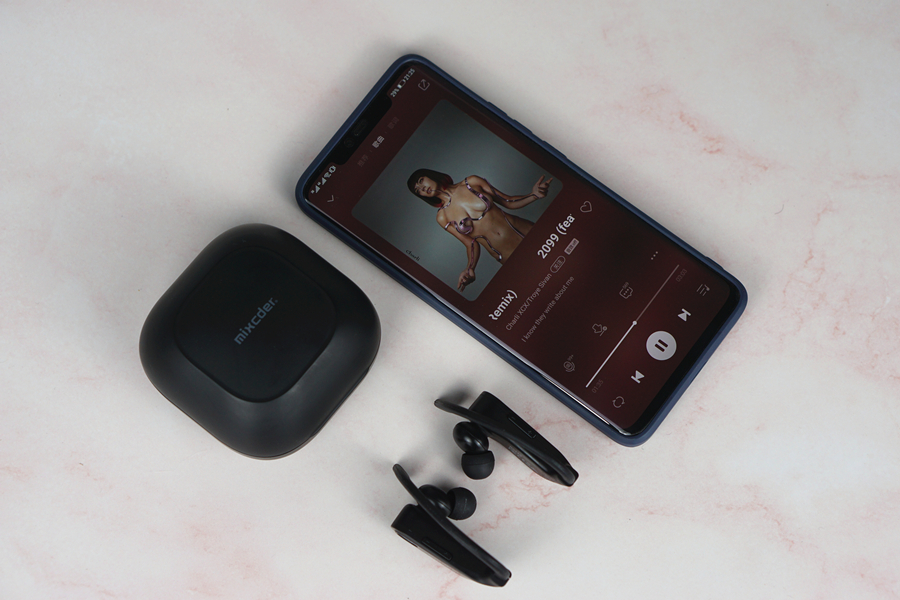 These earbuds come with 10mm dynamic driver units, which should somehow make up for the lack of higher-standard codecs. The frequency response of the T2 ranges from 50Hz to 20KHz, pretty standard for true wireless earphones at this price point. With an impedance of 16Ohm and sensitivity of -85dBm, you should not expect these earbuds to work miracles, and they don’t.

Bass
There is a decent amount of bass, which can go fairly deep as well. But is unfortunately a little on the loose end. On tracks with intense sub-bass content, like Stormzy’s "Own it", the Mixcder T2 fails to deliver a powerful low-frequency response. On other average hip-hop tracks such as Cardi B’s “Money” and Tyga’s “Taste”, drums just lack the kind of punch and weight, as a result, the recording sounds less engaging than it is supposed to be. At higher volume, unwanted muddiness starts to kick in.

Mids
The Mixcder T2 does an okay job with the midrange. Vocals are reasonably forward-sounding, with some intricate details in them. Listening to Celeste’s “Strange”, her angelic voice sounds layered, and full of emotions. With that said, the T2 is still no match for the Astrotec S90 Pro in terms of clarity, as the latter has dual Knowles armature drivers in it.

Treble
The high-end on the T2 is a shade darker than it is on the Astrotec S90 pro. There’s a lot of energy in the lower treble, which ensures enough attack for chime-like instruments. But mid and upper treble responses are somewhat tamed, you get very little shimmer.

Soundstage
Like all true wireless earbuds, the Mixcder T2 doesn’t offer much soundstage. For the most part it is more of an in-your-head feel. While there are some height and depth, they are shallow and the width of the stage extends to your ears at most. Instrument separation is not impressive, either. With more complex recordings, the T2’s struggle with dynamic range also starts to show. The hard pounding in the middle of Emeli Sande’s “Hurts” somehow turns into pitter-patters, making the track sound less exciting than it is supposed to be.

If sound quality is your primary concern in finding a pair of new wireless earbuds, the T2 will probably disappoint you. In fact, not many true wireless headphones at this price point could offer decent sound, the only few exceptions I know are the Astrotec S80 and the Creative Outlier Air/Gold, but neither of them can give you the kind of secure fit brought by the Mixcder T2. 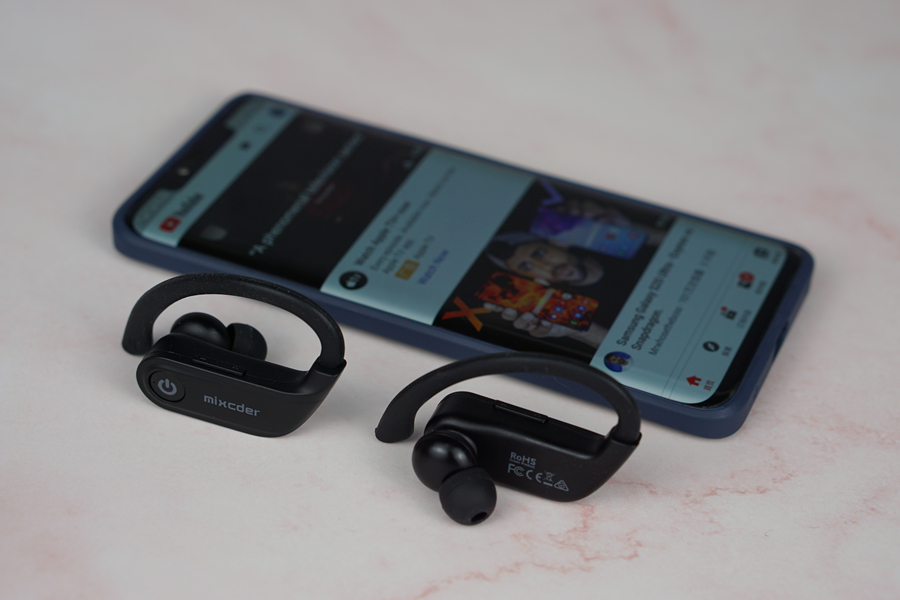 I experienced no latency in audio watching YouTube videos on either the Huawei Mate 20 Pro or Apple’s iPhone X. But there is some time lag in graphics and sound while playing games on the Huawei Mate 20 Pro. In fact, I encountered the same problem with almost all of the true wireless earbuds I have tested, something you should bear in mind before buying headphones in this form factor. 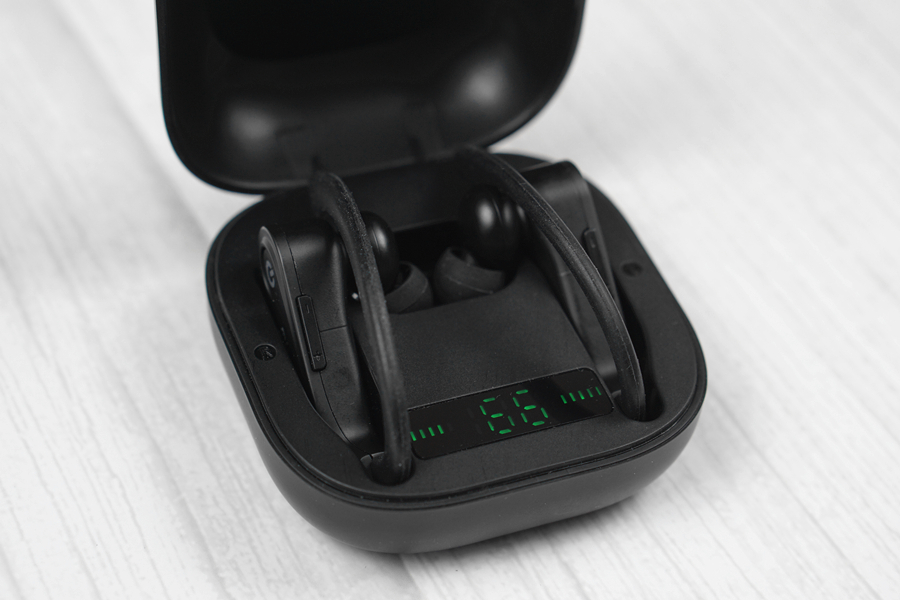 One of the perks of the Mixcder T2’s large charging case is a large 950mAh battery under the hood, which can give the earbuds 4 extra charges. Even as a pair of standalone earphones, each earbud houses 100mah battery and can deliver up to 10 hours of playtime. As a complete system, the T2 offers a whopping 50 hours’ battery life. In the two months’ time I have spent with the T2, I only needed to charge the case twice.

The T2 also supports fast-charging, the earbuds can be fully charged in around 1 hour, but the case itself demands 2 hours to go from 0 to 100%.

The Mixcder T2 is not carved out to be the best-sounding true wireless earphones. But priced at only $39.99 on Ali-express, these earbuds could give you the comfort and secure fit needed during intense workout, and the battery life which will spare you from charging the case every week. For those of audiophiles who put audio quality above all the rest when choosing wireless earbuds, you should probably look elsewhere, but for average consumers looking to get their first pair of TWS earphones, the Mixcder T2 is simply the best bang for the buck product out there.
Last edited: Mar 24, 2020
M
MrGetDown
I wonder if they are identical inside to either the:
SoundGenie Wireless Sports Earphones
or
CLORIS

I had the Cloris> I fell asleep with them on and woke up to find the 4 contact points had burned 4 dots into my skin where it had been laying.