Menu
Log in
Register
Mavin Air-X Bluetooth TWS - Reviews
Overview Reviews (1) Gallery
Pros: Really impressive sound quality - especially considering their form factor. Volume control. Excellent battery life. Pretty good range (as good as the Airpods anyway). Absolutely no dropouts experienced at all.
Cons: Fit could have been deeper. Whilst I have got more used to the fit, I still prefer deeper insertion (oohh Matron!). The case feels more fragile than the Airpods case - I suppose only time will tell if this is an issue. Volume steps are too coarse (still appreciate the feature though). 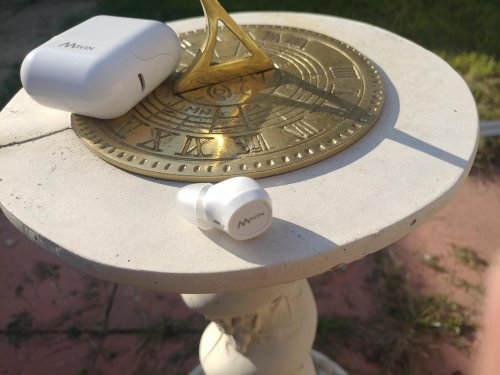 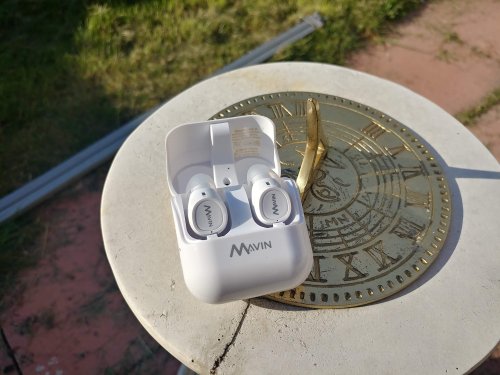 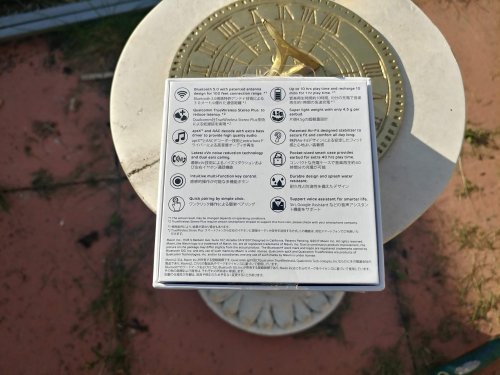 I suspect this review is going to end up being pretty long. I’ve experienced a lot of bluetooth headphones over the last couple of years and I thought I would bring these experiences into the Mavin Air-X review. I strongly suspect that I’m not the only one chasing the magic combination of ultra-superb sound quality, genuinely useful controls and all within a very tight budget.

I’ve never owned the ultimate in top-end hifi. I do own some nice headphones - including:-

My listening device is the rather excellent LG V20 - utterly awesome sound quality when using wired headphones and, thanks to the Oreo upgrade, offers rather exceptional bluetooth audio performance thanks to its use of LDAC and APtX HD. I listen to a mixture of EDM, Classical (Baroque), Folk, Rock and definitely not rap!

Out of my wired headphones I tend to use the Sennheiser’s to ‘cleanse my palate’ so to speak. They are very nicely detailed, comfortable and ‘flat as a pancake’ as far as frequency response goes. Likewise I feel that my Ultimate Ears Triple Fi 10’s do the same thing for IEM’s. Whilst it might not be considered fair to use these fairly expensive headphones when judging the sound quality of less expensive headphones, I feel it does help to quickly identify any boosts or cuts in the frequency response when evaluating other headphones.

Bluetooth - instrument of the devil?

I’ve pretty much full embraced bluetooth as a perfectly acceptable method of listening to music. I certainly don’t feel the same way about car stereos, transistor radios, DJ sound systems or my wife’s singing. I truly believe that bluetooth and, perhaps more specifically, the codecs now available for it, make wireless listening more than perfectly acceptable - especially when you take into account the additional freedom afforded to bluetooth headphones.

There’s plenty of YouTube videos out there showing the Air-X’s - I see no point in going into infinite detail regarding all the bits and bobs - watch the vids - I did and picked up loads of info. Light - very light. Made from plastic. X’s have the widest sound bore I have seen in an IEM (I think). You will definitely have problems trying to fit many third-party tips on them easily. The good news is that if you do find ‘THE’ perfect tips, chances are they will still fit in the case. Nice touch Mavin! The push buttons are quite ‘clicky’ and do require some pressure - this often results in driver-flex. Other than that the ‘click’ does help confirm you’ve pressed the button hard enough to register. It would have been really REALLY cool if they had been touch-sensitive. I have put a set of the included ‘wings’ on them - not really sure if they really make a difference regarding fit. I shall have to experiment more. Interestingly the Air-X’s offer remote volume control. This is very unusual on these types of headphone - and it’s very welcome indeed. A simple single press - right for volume up and left for volume down - although the control is quite coarse in its adjustment - this is a problem with many bluetooth headphones though. A slightly longer press on either bud will pause the music, double press for track skip forward/backward. Nicely thought out and genuinely functional.

Tips are very much a personal thing. A couple of things to note though. The bores on these headphones are very large and fairly short. This means limited insertion depth. There’s no way you’re going to get an Etymotic ER4 type fit with these things. Shallow insertion only - certainly with the included tips. This, for me at least, can take a little getting used to. It also means that you’re going to experience increased traffic noise when you’re out and about with these things. 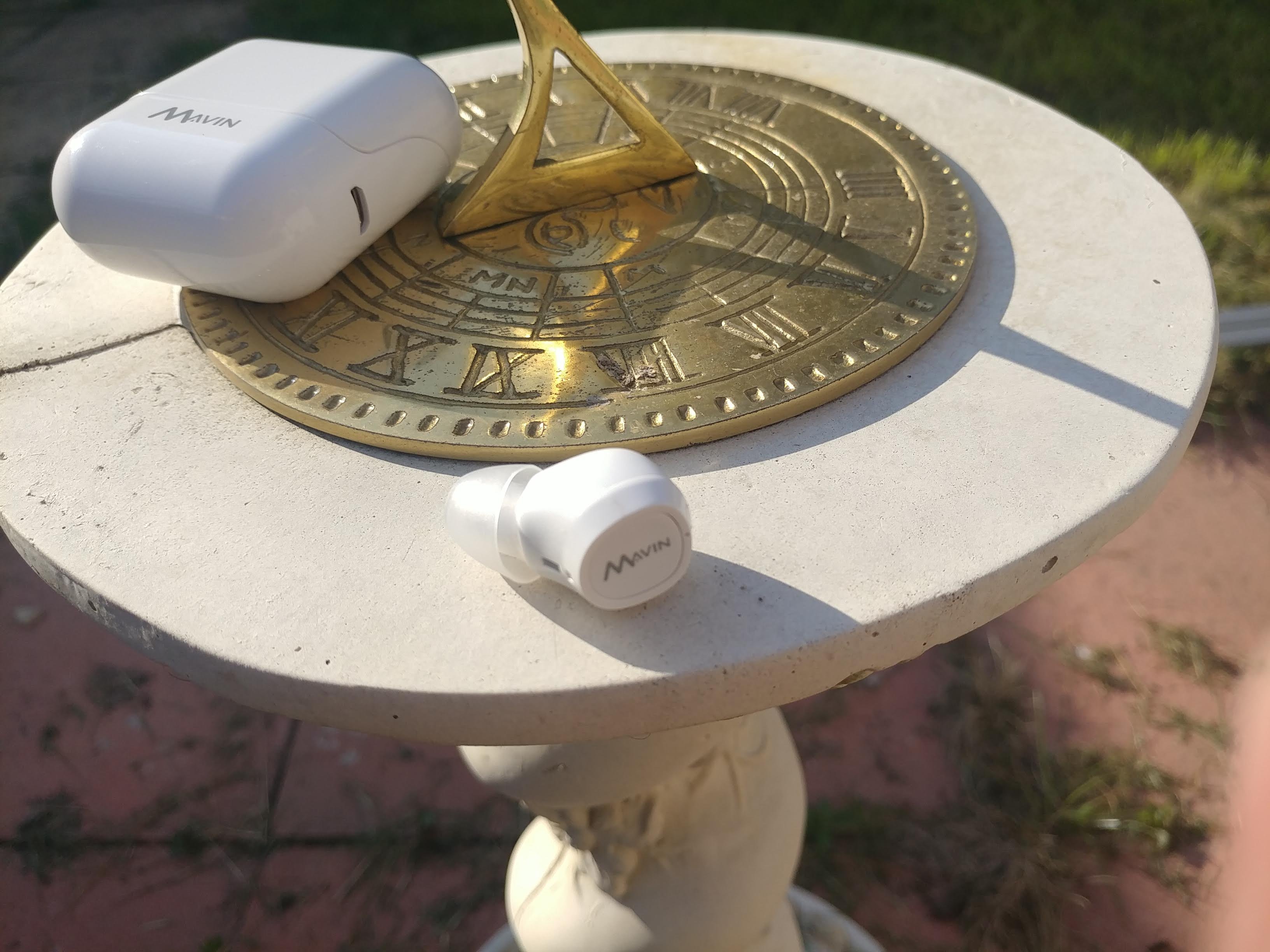 With regard to range, I resorted to my usual scientific tests - can the headphones survive a trip to the upstairs toilet whilst my phone is still downstairs resting on the sofa - yup - no problems - as long as you don’t put your hands over the earbuds as this will result in drop-outs. The good news is that I didn’t experience any dropouts at all during normal use - none at all. I haven’t really bothered going further afield because there’s no point - any further than the bathroom and my phone inevitably comes with me (usually does to the bathroom as well if I’m going to be honest).

OK - Bad things first. The plastic is thinner than that used on the Airpods case. When closed you can see the LEDs on the earphones through the plastic. The magnet that keeps the lid closed could do with being a little stronger and the hinge feels a little flimsy - again when compared to the Airpods case. It would have been nice if the case used USB C for charging - but that’s nitpicking. 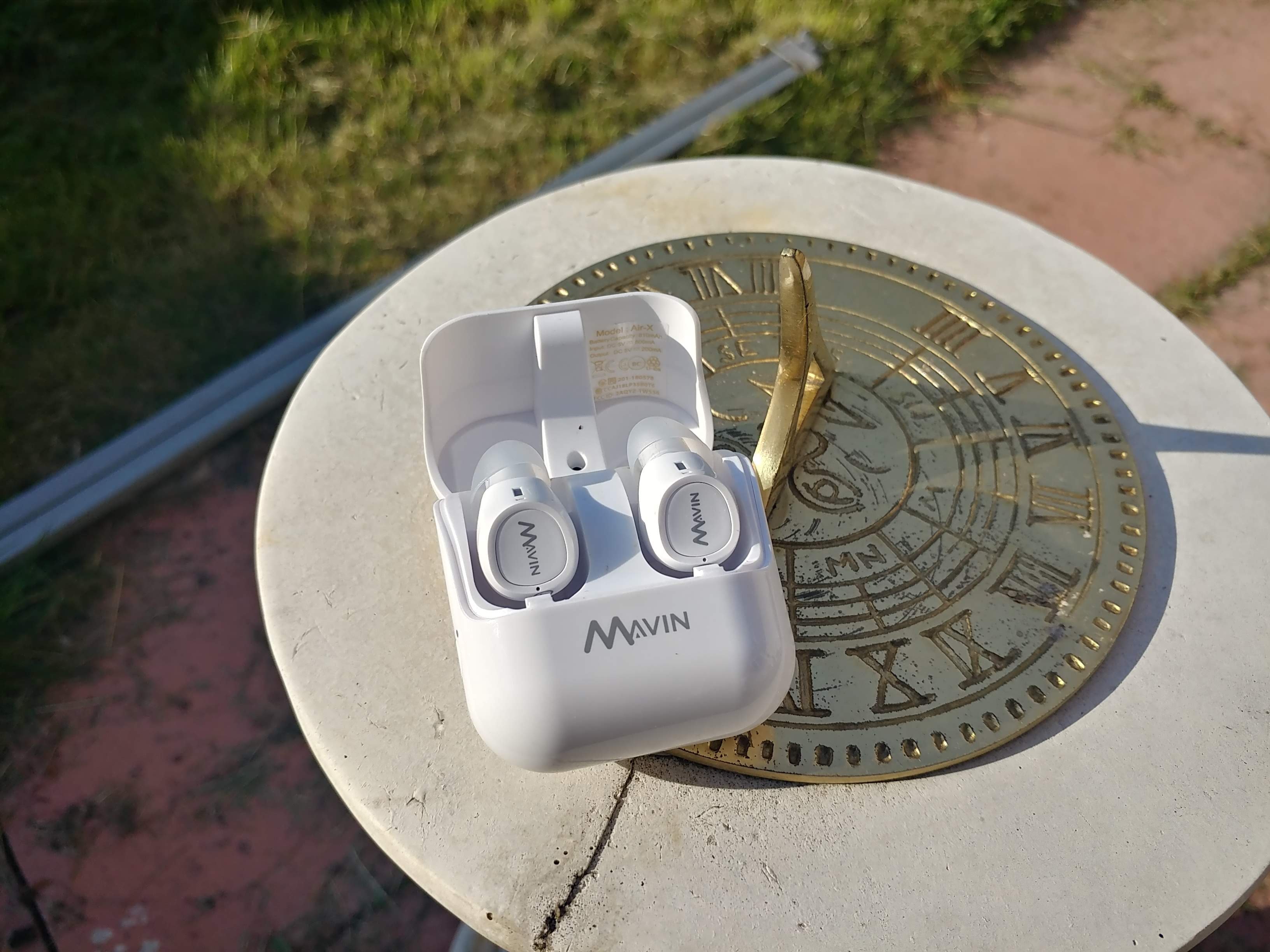 OK - now on to the good stuff. I really like the magnet strength that holds the earphones in. Works just as nicely as Apple’s. I can’t comment about battery life but to be honest I’ve not really had a problem with any of my wireless IEM’s when it comes to battery life because of the way you tend to always put them back in the case after you’ve used them. One last point - there’s a button on the side of the case that is used for both pairing and getting basic battery strength. The latter is indicated by flashing the LED - 1 for low battery and 5 for max battery - another nice touch.

Sound Quality - Should Etymotic and UE be worried?

As far as I'm concerned sound quality is what it's all about. Doesn't really matter how good the fit is or how advanced all the features are if they sound like a bucket of bolts. The good news is that the Air-X sound great. The use of AAC and APTx definitely gives the headphones an edge when it comes to producing the higher frequencies. I also feel that it’s only fair to point out that the Mavin Air-X are not the most expensive headphones in the world - although they do compare with some of the better wired in ear monitors in my opinion - that’s no mean feat considering their price and the fact that they’re wireless.

Bass is deep when it needs to be but it’s not boomy. There’s perhaps a little less texture to bass instruments when compared with something like the Triple Fi 10’s but not by much. Bass has a nice amount of slam when required and doesn’t appear to encroach into the other frequencies. Obviously you really need to make sure that the fit is as good as you can get it to achieve this bass quality.

Nicely forward. By this I mean that they don’t sound recessed - vocals stand out nicely and there’s enough resolution to hear tiny details such as breathing and the acoustics of the recording booth - pretty impressive.

Very slightly recessed but in a good way. Once you get a good fit the treble is nicely controlled and non-fatiguing. Again, as with the bass, perhaps a little less ‘texture’ to the treble than that found on the very best in ear monitors - but again not by much. The Mavin’s are definitely able to show the benefits of the improved codecs. Extremely impressive for their price and form factor.

What really impresses me though is the amount of detail these are capable of producing. One track I often use when reviewing headphones is ‘One Of My Turns’ by Pink Floyd. This track features a TV playing in the background. The Mavin’s had no problems reproducing as much detail from the track as the Ultimate Ears Triple Fi 10’s - that’s a hell of an achievement for a wireless earbud.

You should be aware that the Mavin Air-X’s don’t offer the same level of sound isolation as some in ear monitors - and this can be a problem in noisy environments. Whilst this can be beneficial if you’re wearing them whilst out and about for safety reasons although they certainly isolate far more than the Airpods though. With this in mind though, most of my listening was done in a quiet room rather than outdoors. 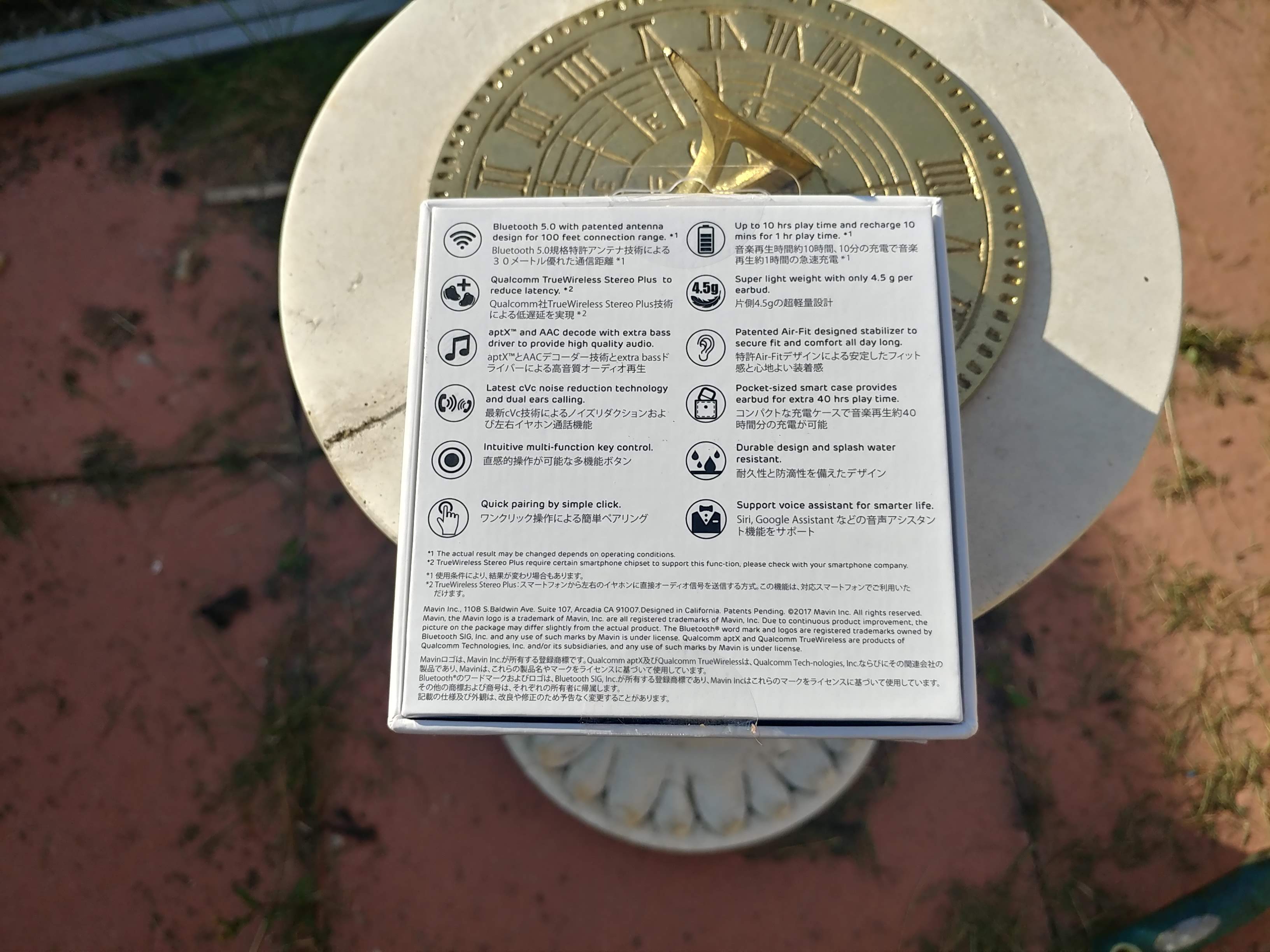 Electronic noise floor is pretty much non-existent with the Air-X’s and they have plenty of clean volume which is always welcome. It’s a really nice and useful touch to be able to control the volume with a single tap (left for volume down and right for volume up) although you should be aware that the adjustment is rather coarse - still damned useful nonetheless. Unfortunately they do suffer with the dreaded flashing lights - something that virtually all wireless headphones appear to suffer with (with perhaps the exception of the Airpods). Range was as good as the Airpods (which is more than acceptable in my opinion).

In case you haven't realised it yet, I rate the Mavin Air-X very highly indeed. Like any other product they have their pros and cons:

Fit could have been deeper. Whilst I have got more used to the fit, I still prefer deeper insertion (oohh Matron!). The case feels more fragile than the Airpods case - I suppose only time will tell if this is an issue. Volume steps are too coarse (still appreciate the feature though).

Well I have had a number of mostly inexpensive bluetooth headphones pass through my hands in the last couple of years and by and large I have been fairly impressed with all of them. Do they compare to the likes of the 1More Triple Driver IEM’s, or the Ultimate Ears Triple Fi 10’s or even the Etymotic ER4P’s? Perhaps not but they’re certainly very close - especially for me as at 56 years old, I have to accept that my hearing isn’t as good as it was in my youth. Being a child of the 60’s, I still feel that sometimes technology borders on magic. Headphones that have impressed me include the Apple Airpods, Sony WH1000xm2’s, SoundPeats Q32’s, 1More iBFree and even the KZ Bluetooth cable which I use in conjunction with my Magosi K3 Pros (very impressive sound quality but still has a cable). I love them all - and now the Mavin Air-X headphones are my new favourite…….for now at least.

iBo0m
Thanks for the review!