Menu
Log in
Register
Massdrop x Koss ESP/95X Electrostatic System - Reviews
Overview Reviews (2) Gallery
Pros: Price
Fast music response
Levels of detail
Cons: Creaky plastic is distracting, and also leaves a nagging doubt in ones mind, that they will break each time that you take them off your head.
I had been thinking about trying electrostatic headphones for a while, so when I spotted these on Drops european warehouse closing down sale, i jumped at the chance.
I found them very enjoyable with acoustic jazz - delivering the same levels of detail that I experience with Aeon Flow Closed, but adding a faster response plus a feeling of more air or space around some acoustic instruments.
For sources, I used a Chord Mojo and Hugo2, and both provide the levels of music detail, that the Koss can then well deliver.
I found the split volume control irritating at first, but I got round the problem by setting the controls for a comfortable volume (and never touching them again), and relying on the dac volume controls for fine tuning.
My main irritation is the creaky plastic. I realise that the original Koss were intended to be portable, and the plastic helps to keep everything low weight. However the plastic creaks too much, to feel like a premium piece of kit, and you have the continual fear that sooner or later the plastic will break. I deducted half a mark for this.
I didn't experiment with alternative power supplies, but I will now consider the option.
Overall if you enjoy acoustic jazz, then a simple system using a Chord Mojo, plus the Koss, is going to be hard to beat in terms of value for money.
Reactions: Cat Music, trellus and JTori
Pros: Detailed and non-fatiguing sound that is especially great with vocals and instruments. Good for quiet to moderate listening volumes. Sound can be improved with a better power supply. Light-weight. Front 3.5mm input.
Cons: Cheap, creaky plastic and earpads that are noisy when rubbing. Split volume control difficult to turn without losing balance. Vibrates with low bass. The sound isn't so "punchy" and gets shouty at higher volumes.
The Koss ESP950, as they are originally known debuted in 1990, around the time I got my first pair of headphones. I wish I had known about them then, though they would have cost a fortune back in Australia at that time. A pair of Sennheiser HD600 or HD650 cost around $8-900!

Not having changed at all since then, they look like a relic of the 80s, from the cheap, creaky plastic to the internals. Unusually, they come disassembled, with the driver assemblies detached from the head pad. Given that the original set comes with a battery pack, this old attempt at portability makes sense. 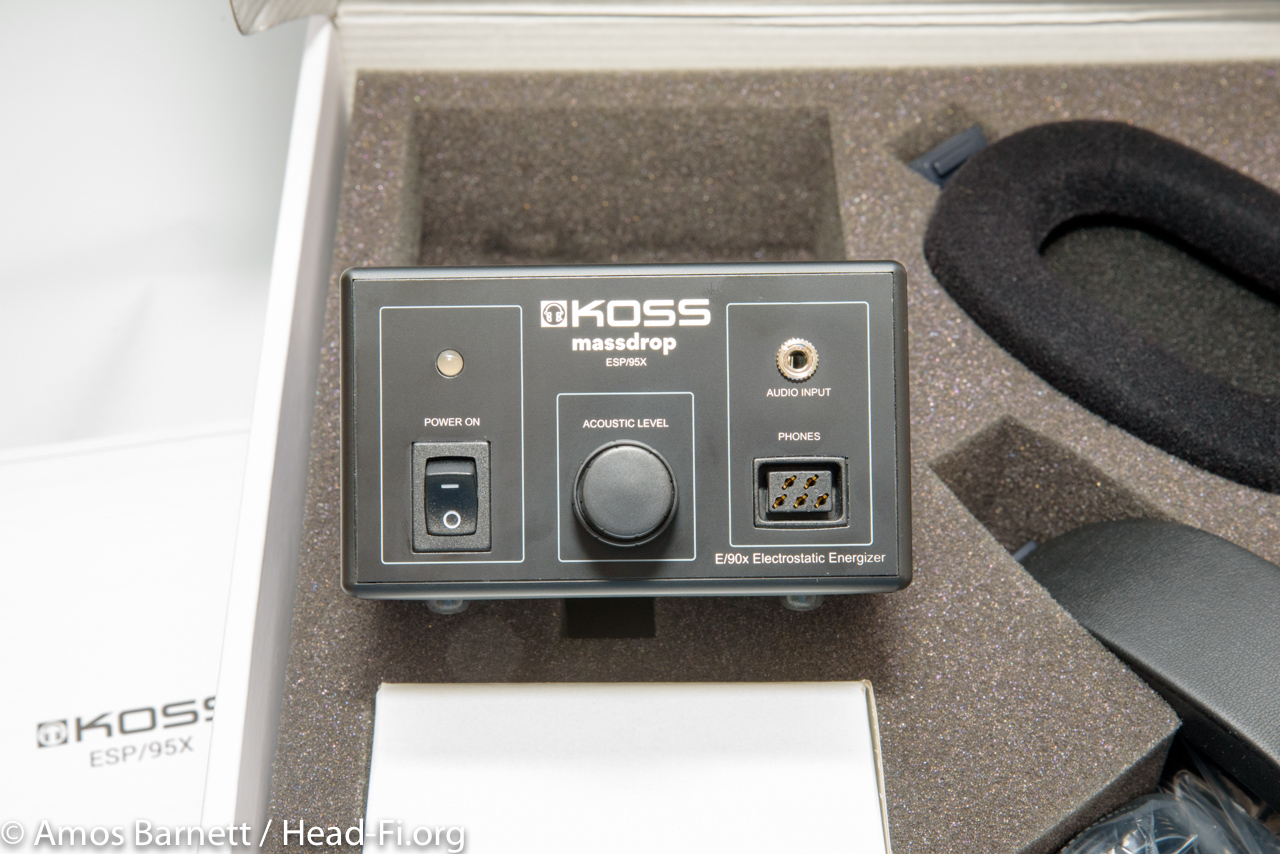 Unfortunately, that means that they cannot plug into a regular headphone amp, instead requiring a driver box, for which Koss provides a surprisingly light-weight unit. As well as RCA inputs on the back, a 3.5mm input is included on the front for portable use. The Drop version of the unit doesn't include the battery pack, nor cables. The ESP950 normally sells for $999 ($899 on Amazon, last I checked), and occasionally $699 on sale. Drop is offering it for $450 in this simplified configuration.

Not having magnets, electrostatic headphones are very light, and these sit gently on your head, and are joined in some plastic creaking by the noise of the material on the cheap ear pads rubbing up against your face. 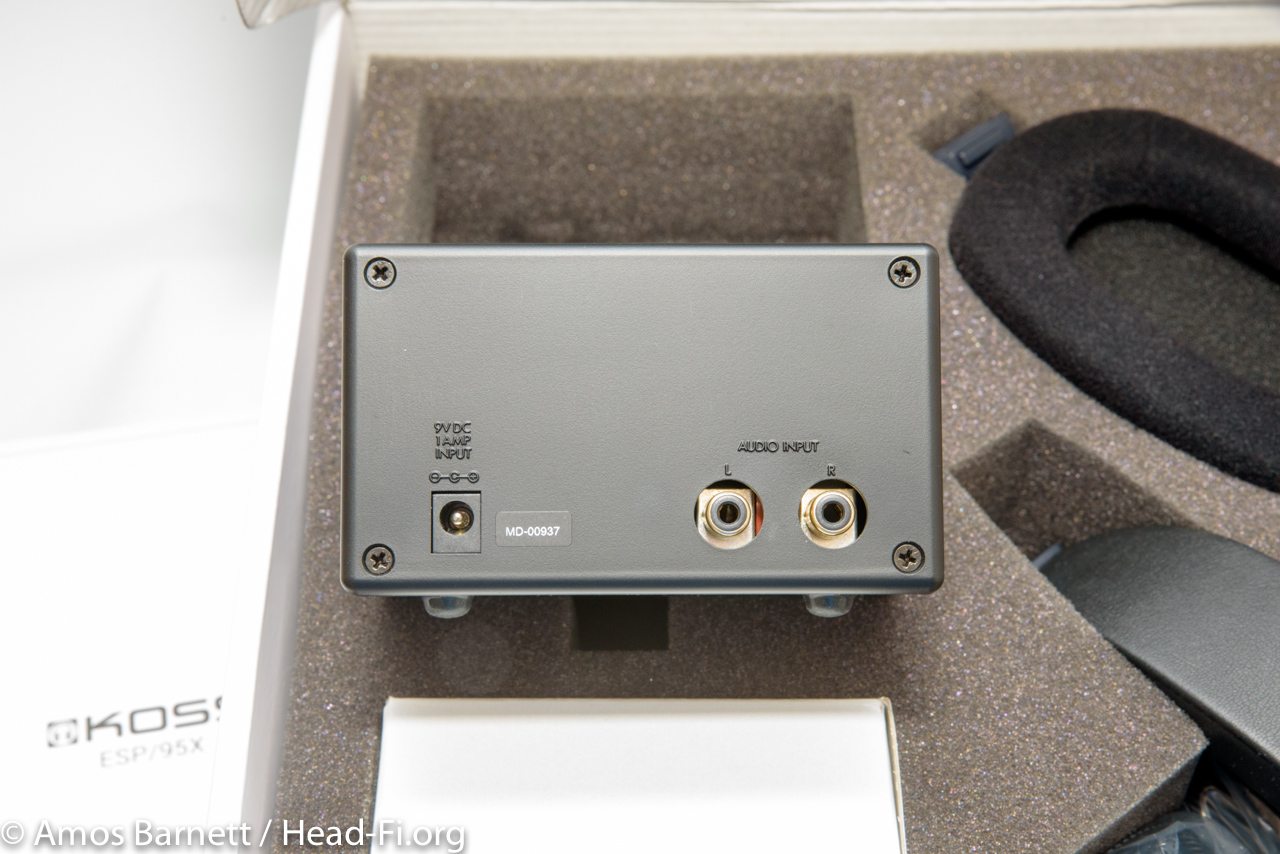 They were a very welcome relief from the somewhat heavy Final D8000 Pro which are in for review. Set-up is straight-forward. Plug in the wall-wart, a DAC of choice, and the earspeakers (as stats are traditionally referred) with their proprietary connector. At power on, the light indicates green if the power is good, red if not.

The volume adjustment, like Stax driver units, is split between left and right. Being small, it is hard to turn them equally together (I wish they had taken a leaf from Stax or Luxman, both who know how to do split volume controls that turned together unless deliberately adjusted separately). I am tempted to put a couple of drops of super-glue or tape on them to make them turn together.

Putting aside the creakiness, the sound is what makes these so nice to listen with. They are tuned somewhat speaker-flat, which is a bit more mid-forward than what I would call listening neutral than comparably-priced headphones like the Sundaras are tuned. Whereas most headphones are more punchy, the Koss are more airy, with music floating out to you. They extend well in both directions, but low bass doesn t have kick, and turning up the volume makes them more shouty around the mid-range.

Where they may not be good for thump, their strengths are in their lack of fatigue, one which comes without rolling off the treble or being soft. Vocals and instruments come through with a competent clarity which is very enjoyable, and there is a sufficient amount of bass that, combined with the speed of the diaphragm, makes fast-paced music a fantastic listen.

In that vein, the classic question is, Have you been Shpongled? as the very rapid beats of this famous psychedelic music are a great match with stats, the Koss being no exception.

Compared to the Drop Sennheiser HD6XX, the Koss unit sounds far more open, the HD6XX seemingly much more closed-in, even with a good amp such as the THX AAA 789. Closer competition was provided by HiFiMan s Sundaras, which came across as slightly v-shaped in sound, while offering much the same level of performance, or more with a good amp (and thus significantly greater outlay).

However, the Koss driver unit was readily improved if I substituted the included wall-wart with a linear power supply. Adjusting a spare one to 9V output, a slight muddiness that pervaded the sound went away, and the bass became tighter. While not giving it slam, it pushed the Koss unit into territory that if it weren't for the ear pads, I would seriously consider them for daily use.

Considering them as a serious use contender, I ran them with a variety of DACs from Schiit, Audio-gd and Topping. I could not find fault with using any DACs I had on hand, I would say that the Yggdrasil is overkill, as while the Koss were quite detailed, even using the linear power supply, they didn't bring out the finest nuances of the music as my high-end headphones do.

When I want a quiet, relaxing listen, and can overlook the cheap plastic, the Koss ESP/95X is a good-value system, allowing a delicate precision at quieter volumes. Especially for the quieter listener, this is a very good unit that isn't source-fussy. 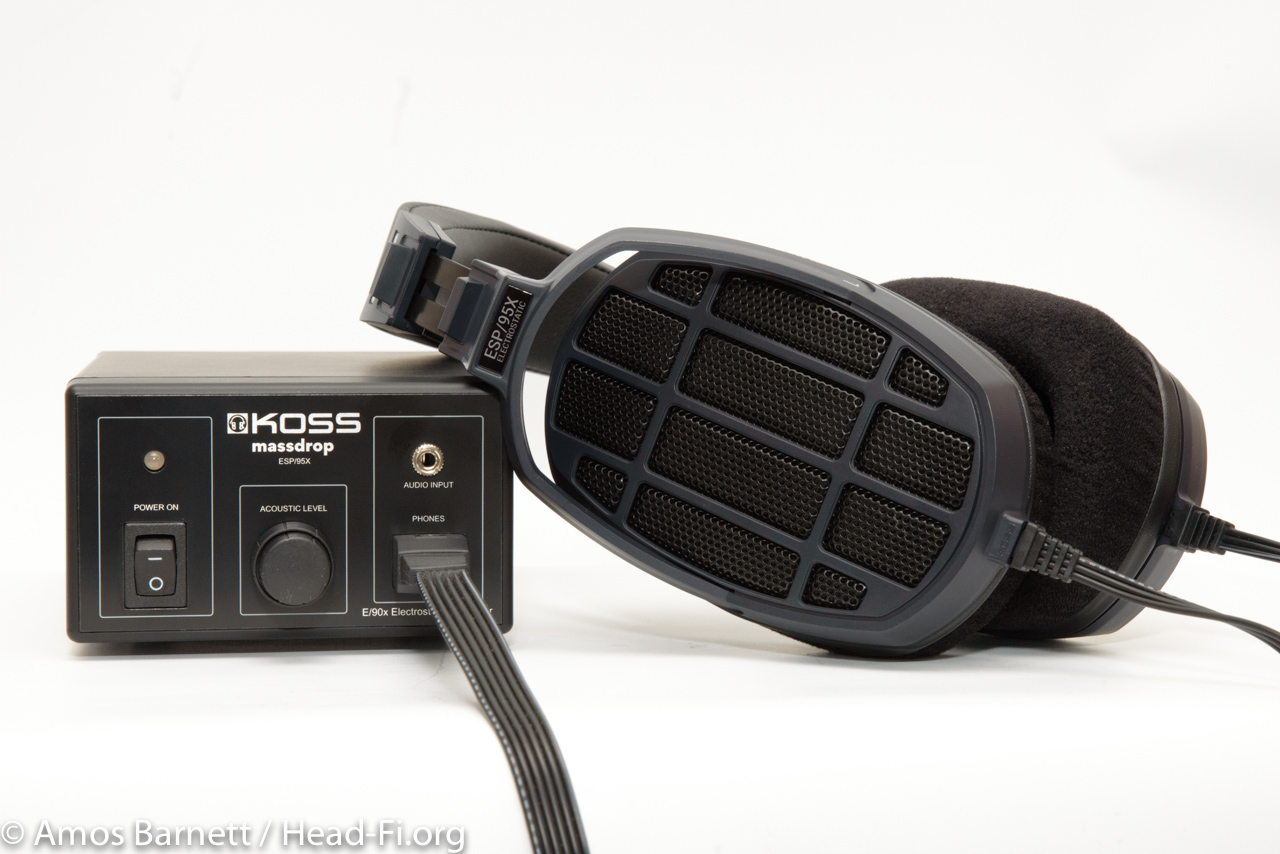 Mach3
No it won't I'm using a 3A custom adaptor and it works fine.

Mach3
Nope it to cut cost imo. The higher end Stax aren't made of cheap plastic.