Loading…
Tone2 Pro: Sleek, Sexy Balanced HiFi
Pros: Smooth, non-fatiguing airy sound with lots of extension. Musical. Sleek, sexy yet solid form factor. Almost all-in-one.
Cons: Controls take a bit while getting used to. Single-ended HP output not enough for high-impedance headphones.
I'm quite a fan of all-in-one DACs and upon receiving the Khadas Tone2 Pro, it was nothing short of exciting. You can get the Khadas Tone2 Pro from Hifigo. I was intrigued by how they were able to pack an ESS DAC, coax, opamps, single + balanced outputs onto this sleek formfactor that is just a bit taller and thicker than a credit card. Alas, let's get onto the review and how this small, little DAC is about all you would need to have with you as a desktop stack alternative.

Introduction
Khadas is a brand owned by a Shenzhen-based company called Wesion Tech Co. They are makers of open source, OEM/ODM solutions such as single board computers and admittedly, I did not know much about them from even then but they were able to make a name for themselves in the audio industry with the Tone Board, which has garnered quite a number of positive feedback. Now, they're back with a sequel with lots of improvements of course, specifically now being a standalone usable product instead of just an integratable circuit board.

Packaging
The Khadas Tone2 Pro comes in a similarly sleek white box with the Tone2 Pro itself placed nicely but just with the manuals, warranty card and a single USB-C to C cable as its lone accessory. Would have wanted a bit more but I guess any additions would shoot up its cost a bit more to the north considering this is a $199 all-in-one DAC. An adapter or a case/pouch though wouldn't hurt but alas, you only get what is listed. 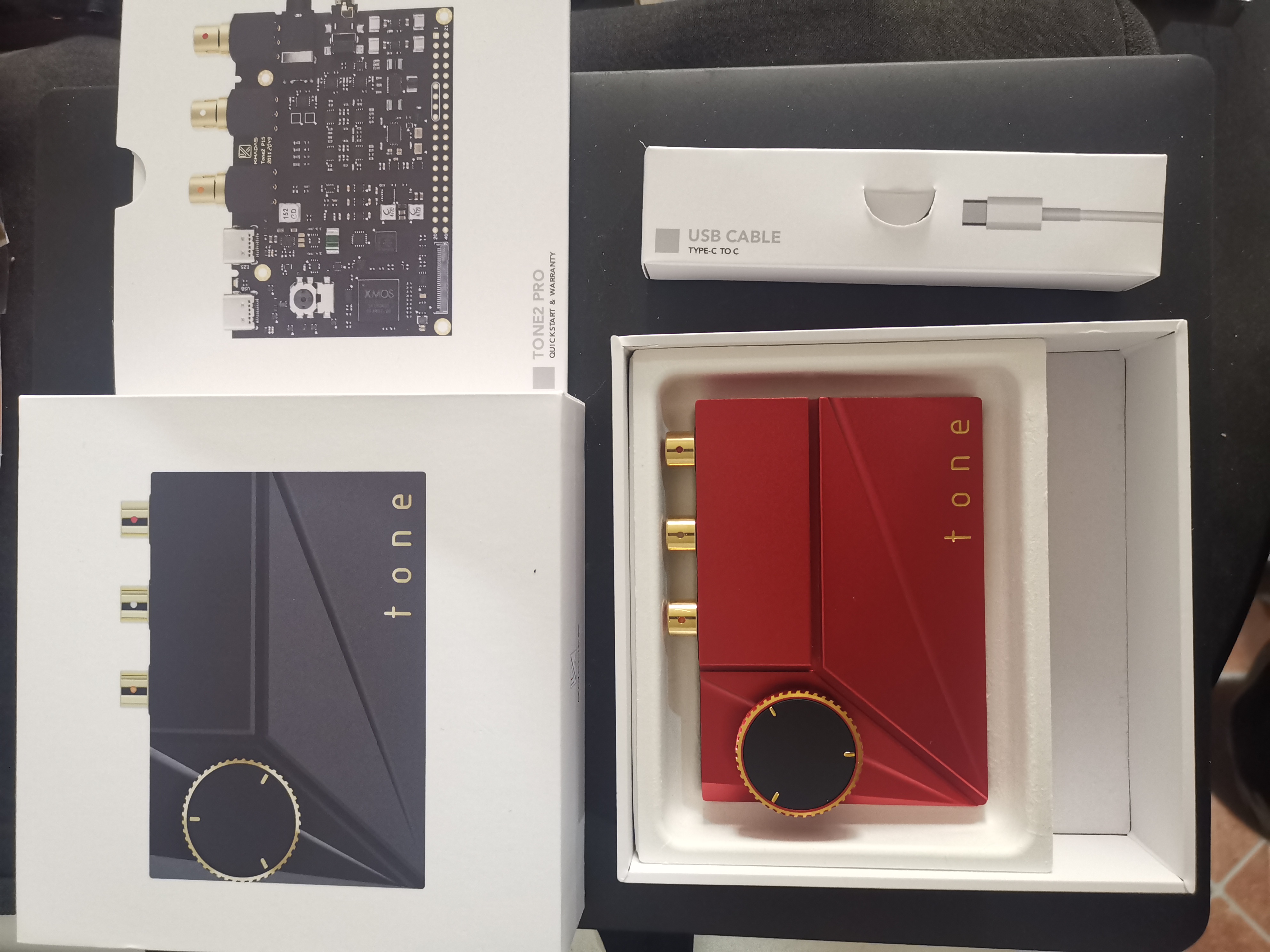 Build
The Tone2 Pro feels solid and is just about almost the size of a credit card, just a tad taller and thicker but is still not as thick as a pack of cards or cigarettes. Aside from the silicon pad underneath (which is for stability or non-slip purposes), its matte aluminum body does not ever look cheap with mine coming in red for that Iron Man feel but not as glossy. Aside from the plastic backing that houses the ports and the knob, which is the only means of control you have on this product, everything seem stylish and feels good. 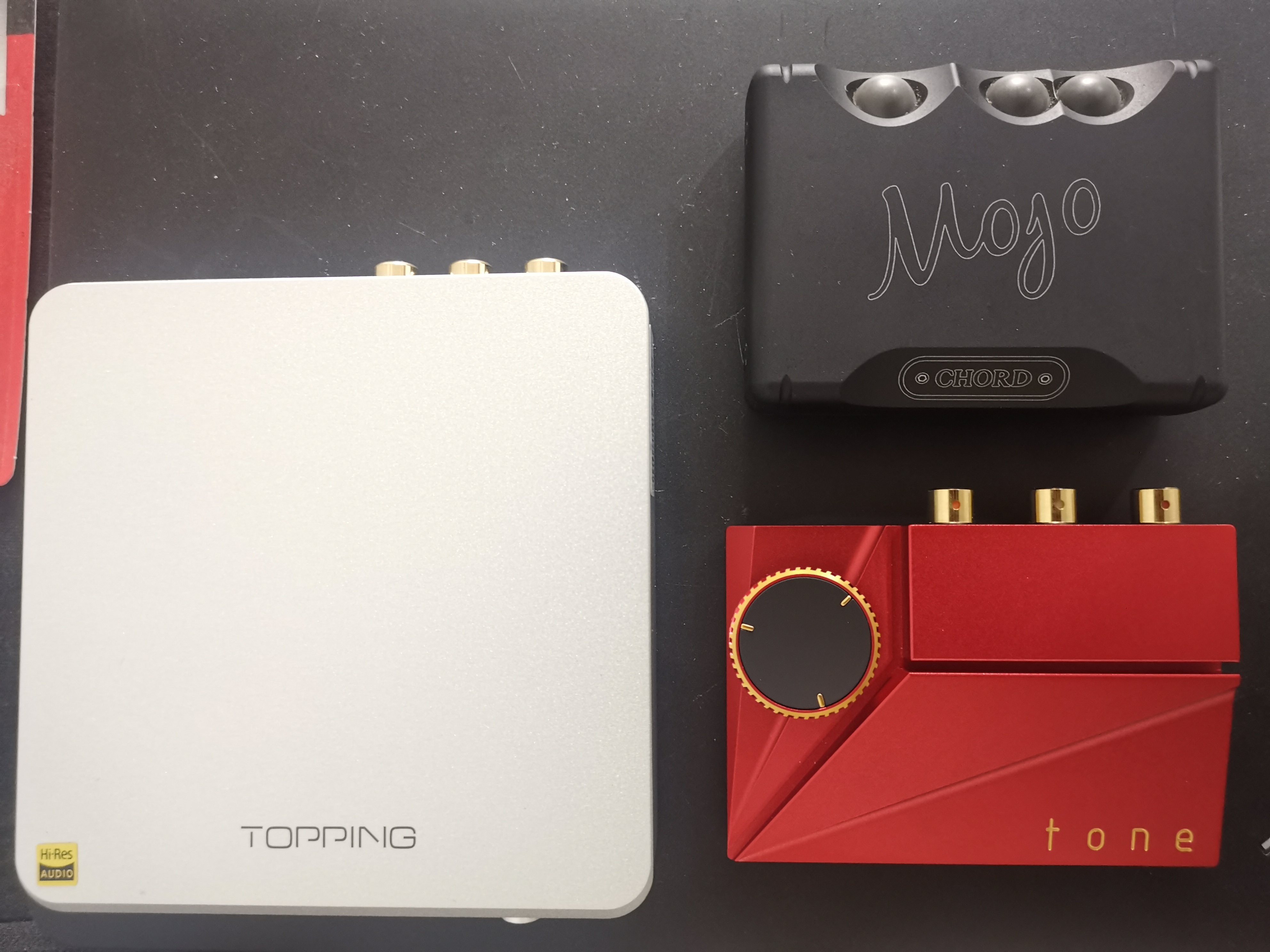 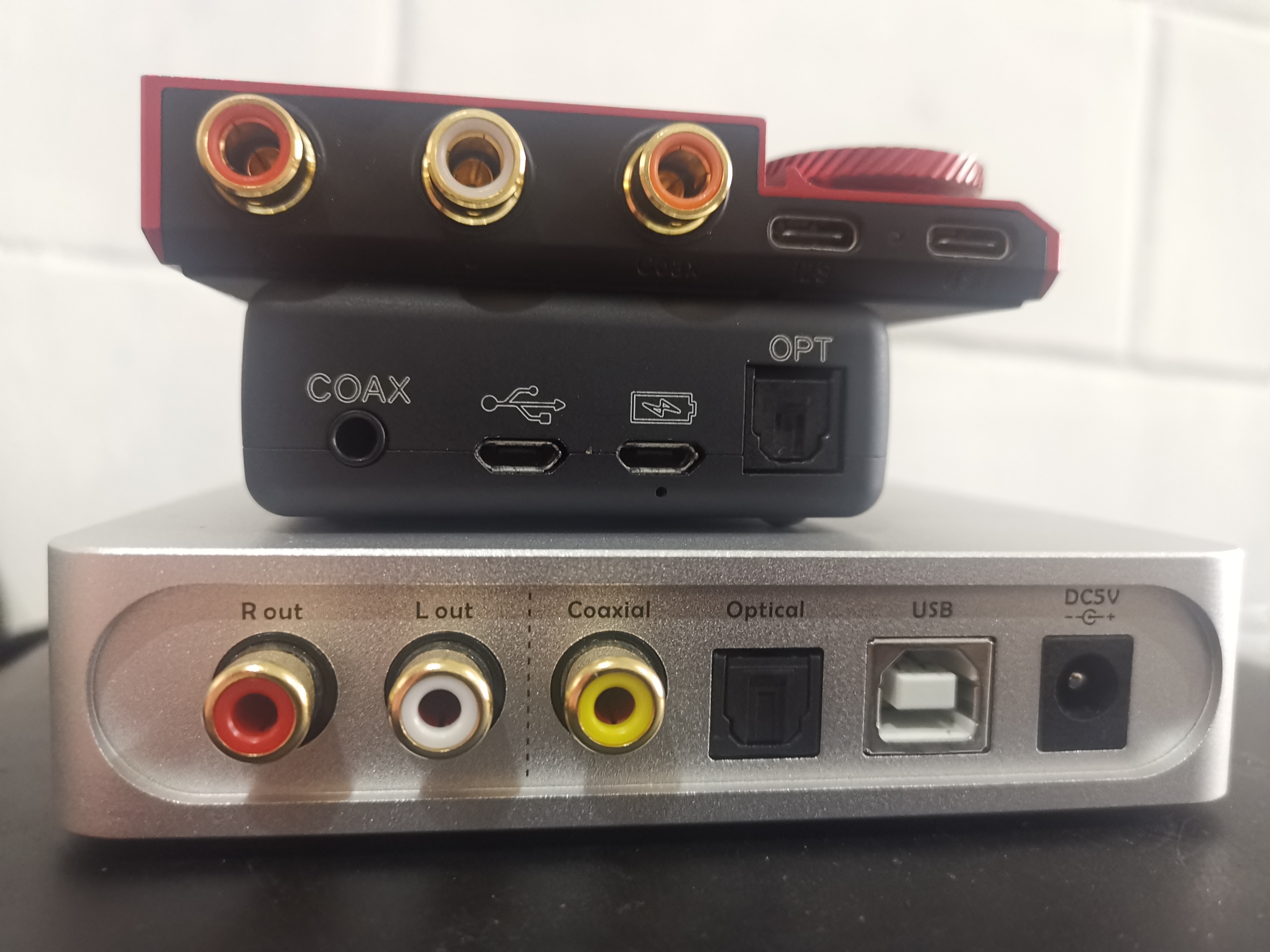 Functionality and Sound
The Tone2 Pro has a USB-C input as its main with an I2S USB-C port as well for expandability options such as a Bluetooth adapter or a separate linear supply (which I would recommend). It also has spdif coax input, which I feel should be a requirement for DACs even nowadays to avoid being branded as just a USB DAC for versatility's sake, though it does miss having an optical port but I would not complain for this form factor. It has RCA preouts of course but what stands out is that these RCA analog outputs does have balanced capability. I was not able to use it as I do not have the balanced RCA interconnects but am quite intrigued with how it would work once these are widely available to connect with balanced amps. It also has single-ended 3.5mm headphone out as well as a balanced 4.4mm output. It definitely is a welcome function being a all-in-one but to note, do not expect the 3.5mm HP output to drive high impedance headphones. Despite its opamps, it had trouble driving my Sennheiser HD6xx and Beyerdynamic DT770 Pro, unable to separate busy elements with lots of noise, distortion and lacking loudness even on high gain. I would not expect much from its amp stage for a device this small, at least it does have it. It is very capable though with IEMs (without hiss) and 32 ohms headphones such as the Sennheiser Momentums and V-Modas so no complaints there.

Plugging in to either my mobile and PC was hassle-free. Automatically got detected by USB Audio Player Pro via my mobile phone (Huawei Mate 20) while it automatically installed a driver via Windows though you can manually install with directions in the manual where to download for your PC. However, it did not work connecting to my AK SR15 player via USB output, seems due to power reliance or incompatibility as the RGB ring light just continued to flash without recognition. That aside afterwards, everything was up and running via my mobile. The default control for the knob was the volume of the HP outputs with red going to cyan/teal levels on its LED indicator. Though it has to be noted that controlling and cycling through its different functions take some time getting used-to but once you get the hang of it, it's actually pretty simple. Pushing down twice on the top side of the knob (not surface) cycles through the different sections such as the track, gain, inputs, and filters while turning the knob adjusts the levels. Admittedly though, I can imagine users will find difficulty in using this control method. 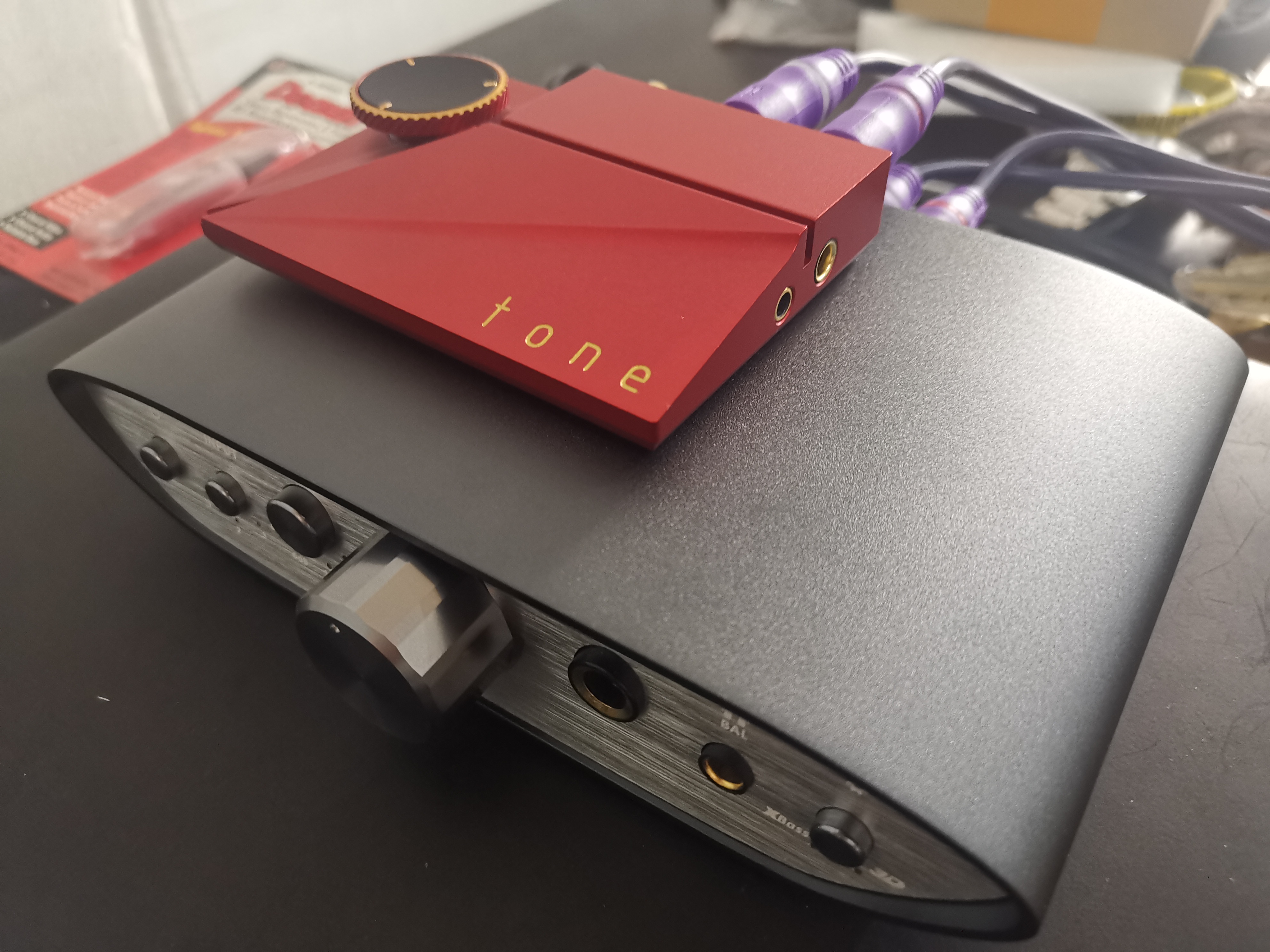 Onto the sound impressions, I have to say this is one of the better ESS Sabre implementations out there. Out of both the ifi Zen Can and Schiit Magni 3, the Tone2's ES9038Q2M gives a smooth, very airy, presentation. Non-fatiguing and musical even out of the Senn HD800 and no harshness out of the AKG Q701. Layers do stand out with above average details and staging. In comparison, the Topping D50 with its dual ESS Sabre implementation gives out more details though at a more analytical and dry sounding way with less emotion, reason why the D50 is good to pair with a tad warm-sounding or thick bodied sounding amp. The Mojo, on the other hand, gives out the same hint of warmth and smoothness. It's basically the sound combination of the strengths of both the Tone2Pro and the D50 but with an average soundstage as its small weakness though definitely the details, clarity and intimacy is more apparent with the Mojo but of course 3x the price as well. What sets this apart is ithe Tone2's MQA certified capable, which can't be said of the previous two DACs if it matters.

All in all, the Khadas Tone2 Pro is a darn awesome all-in-one product in a compact sexy formfactor at $199. The controls may take some time getting used to and the single-ended HP output may not drive high impedance headphones well enough but through and through, this is a remarkable solid DAC package hindered only by its knob scheme. How else can you have a can-do-it-all desktop setup that fits the palm of your hand at $199? Good job Khadas! 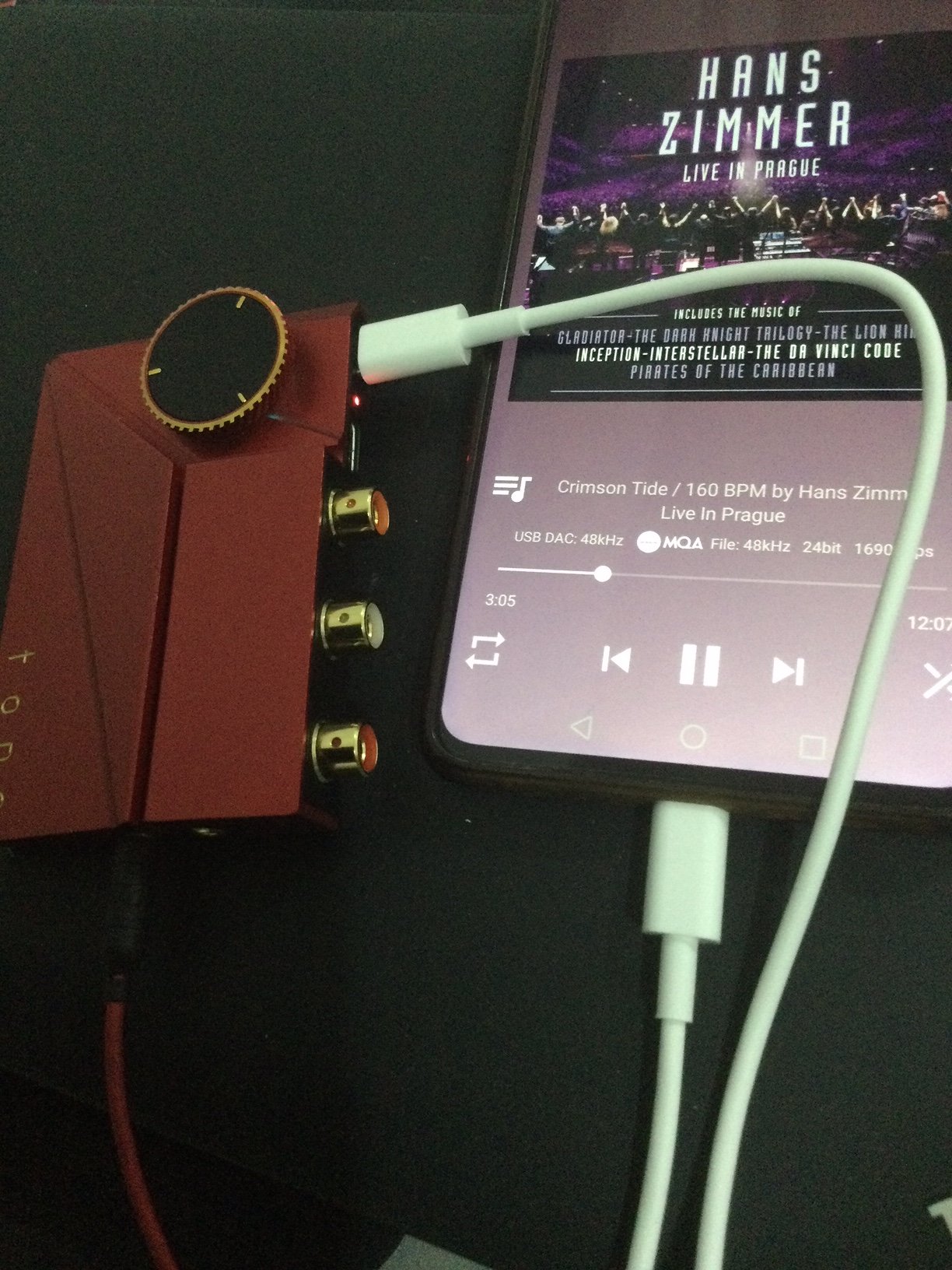 d m41n man
@lycos - it's more of if you value compactness/portability as well as if you would need balanced output and MQA in the future as the Schiit Magni+Modi stack does not have those
Z
Zerozen
Awesome review!
Do you think an easy to drive iem would benefit from dac/amp combo like this?

d m41n man
@Zerozen - somewhat yes, these are already powerful for IEMs in squeezing out the microdynamics at lower volumes and the DAC section gives noticeable improvement in detail retrieval especially if you’re streaming Tidal Masters since it’s an asynchronous MQA ‘unfolding’ and decoder, not just a renderer. If you have IEMs that are too neutral to bright and with quite an impedance such as my AKG K3003 and the RHAs, these smoothens those peaks out for a pleasant yet detailed listening. Just make sure you have a powerbank or linear power supply if your source does not have a capable USB power output. This is definitely not a Dragonfly or USB dongle DAC.