Menu
Log in
Register
JVC HA-FW01 - Reviews
Overview Reviews (1) Gallery
Pros: Fantastic bass performance, a more refined midrange than its predecessor—FX1100, beautiful fit and finish.
Cons: Upper mids/trebles have some grain, MMCX terminals get loose with too many disconnect/connections, somewhat large size although smaller than the FX1100.
Since there hasn't been a review here on the Head Gear section for this excellent IEM, I thought I would contribute my thoughts from the official thread:

I purchased the HA-FW01 new at the end of last year, and now that I have well over 500 hours of play time, I think I can accurately share my observations on how these sound, especially compared to the HA-FX1100 which I also have owned. I should mention for those new to the JVC wood IEMs, these are made for the Japanese market, so all promotional materials are typically in Japanese. 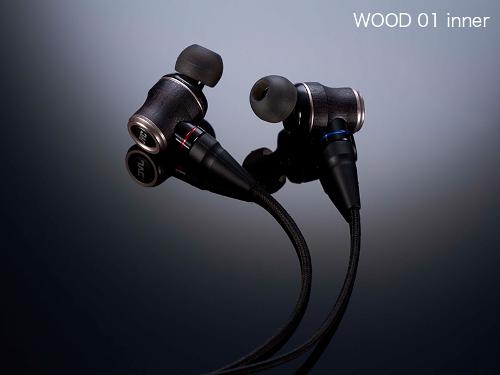 First, a bit of history. In 2008, JVC/Victor released the HP-FX500, the first IEM that used wood fiber as the diaphragm material. I purchased these for about $200 and really liked them a lot, much more than the Denon AH-C700 that was quite popular at the time. As shigzeo—a noted member here—relayed in his early review, "The FX500 sound signature could be summed up in three words: 'rich and thick.'"

Yes, that they were—they had a wonderful tonal quality to them, non fatiguing, and the beautiful wood body only made my attraction to them greater. They were followed up a couple years later by the HA-FX700 which improved on many aspects of its predecessor's design. I also owned them and found they were a worthy upgrade over the FX500. The one shortcoming of both of these models was the length of the non-detachable cable, about .85m.

Around 3 years ago, JVC released a lineup of new woodies, the HA-FX650, HA-FX750, and the top model at the time, the excellent HA-FX850. I bought the FX850 and found it to be superior to the FX700. This lineup has proven to be very popular and an allegiance of woodie fans has developed here on Head-Fi. Also, JVC addressed the cable length issue by using the now standard 1.2m length, and on the FX850, they added a detachable cable.

Which brings us to the HA-FX1100/FX1200. These were released after the before mentioned lineup and are considered the pinnacle of the JVC wood driver design with low end performance that any basshead would grin about. Once again, I bought the FX1100 and was happy with the change. The one noted difference with the cable on these was the use of 6 nines (99.9999%) pure copper, the first time JVC placed any apparent attention on the sound quality of its cable.

The HA-FW01 is a departure from the tonal character of JVC's previous woodies. Some FX850/1100 owners have commented on how the bass bleeds into the lower mids, muffling the sound of this crucial area of the frequency range. Since my use was primarily outdoors, I wasn't too bothered by this; during in home listening sessions I would use EQ to correct for this characteristic.

On its website, JVC writes about the importance of resonance control: they use 4 different elements made from wood, aluminum, brass, and stainless steel to control the resonance that is inherent in all IEMs. Resonance that isn't well controlled can intrude into the overall sound, reducing clarity, imaging, low level detail retrieval, and introducing fatigue with extended listening. If one ever wondered why high quality loudspeakers are so heavy and use different materials—sometimes exotic—for cabinet construction, resonance control is the answer.

I hear this improvement in the lack of resonance when I listen to my FW01. The bass is way better controlled compared to the FX1100, it's more detailed, less one note sounding, yet still rich in timbre. The lower midrange is no longer clouded, rather, male vocals are reproduced with such a clarity that vocal expressions are easily discerned. Female vocals, too, come though with a beautiful purity, less edginess, less fatigue. The trebles are extended, and low level detail retrieval is easily heard—those quiet musical expressions such as the decay on instruments that get lost in the noise floor of lesser designs.

I should mention the gear I'm using for my evaluation: I own an Astell&Kern AK240 Stainless Steel as my transport connected with a Penon Audio 4-nines pure silver OTG cable going to the fabulous Chord Mojo DAC/amplifier. I use the Spiral Dot tips included with the FW01 and the stock cable, which, by the way, is not made from 6 nines copper; there is no mention about the quality of the conductors on JVC's website. Strange, a backwards step from the FX1100, and a possible route for improving the sound further with an upgrade.

In addition to the improved resonance control, the FW01 uses a thinner diaphragm with an updated voice coil design thus enabling greater speed in handling transients. I hear this as better dynamics compared to the FX1100 ... sometimes I've been struck by the dynamic impact throughout the frequency range. I'm sure this improvement in the drivers correlates to the improved bass performance on the FW01.

Another improvement JVC employed on the FW01 is separating the ground paths between the two channels. No, the FW01 isn't balanced out of the box, but JVC (as well as after-market cable suppliers) offers an optional cable that makes it so; those who prefer the sound from this kind of connection (and have an amplifier that supports balanced operation), well, go for it. Personally, I haven't played around that much with this type of hookup in my portable audio adventures.

Summing up, I now own a pair of IEMs that I feel are reference grade. It's been a long journey for me going back to the FX500 and I've enjoyed the ride immensely with each successive design, but the FW01, in my mind, has taken the art of dynamic driver IEMs to a new level. Needless to say, I'm very happy with my purchase. Listening to my library of music is now an adventure with further surprises to await me.

The pictured case on the website has changed: JVC is now embossed on the cover, not Class-S.

Some have commented on the new shiny black front piece suggesting it made the design cheap looking; it is gloss black but there are metallic flakes that, in my opinion, add a touch of elegance.

For whatever reason, I always preferred using Comply T400 foam tips with my previous JVC woodies, but on the FW01, I like the sound of the Spiral Dot tips much better.

The overall length of the FW01 is shorter than the FX1100, so now you can walk around outside without looking like a relative of Frankenstein.

I've always liked the little bump on the left cable of the JVC woodies; it really makes it much easier to identify the channels in the dark. Additionally, there are now color coded bands for right and left channel on each earpiece where the cable connects.

The metal accents on the wood body are a pale rose gold. Also, there are tiny ridges on the back aluminum cap, but they are shallower than the FX1100, an improvement in maintaining its beautiful finish. Previous JVC woodies used this as a design element, but the soft nature of aluminum made it easy to scar these up.

For those who have an extreme attention to build quality, as I do, the FW01 is a luxury product.

Well, I wrote these observations 10 months ago, and although I don't own the FW01 anymore (I gave them to my son as his first proper IEM), I hold mostly to my initial observations. The only tonal area that became an issue for me on occasion was the upper midrange/trebles: on certain types of music there was a medium fine grain that intruded from my full enjoyment.

I did eventually replace the stock cable with an Ortofon SPC cable, the ec8s. Though it improved the FW01 in regards to overall clarity, including the bass, the fine grain remained pretty much unchanged. Upgrading the cable and switching back and forth between the stock one and the ec8s made me aware of how fragile the MMCX terminal is, at least the one JVC employed; I wouldn't recommend disconnecting much.

All in all, a great experience, and now I'm looking forward to reading more on the new JVC HA-FD01 coming out later this month ...
Reactions: B9Scrambler