Introduction
When Jerry Harvey Audio released the JH Roxannes, they were revered as somewhat of a technological marvel. In 2019, while even companies like Knowledge Zenith may be releasing 8-driver IEMs, the audio landscape was vastly different back in 2013. The integration of 12 drivers in a single shell back then was virtually unheard of,combined with Jerry Harvey’s proprietary “Freqphase”, “SoundrIVe” technologies, and an adjustable bass port, the Roxannes made waves round the community.

The Police might fervently disagree, perhaps “put(ting) on the red light” might be necessary to own one, especially with the latest editions selling at $1899 USD, and the initial retail price in 2013 set at $1299 USD. Though there have been multiple revisions since then, the following review is based on the JH Roxanne V1, my personal favourite of the line-up.

Given it’s almost cliché to add a mini write-up about Jerry Harvey and Van Halen on any JH Audio review, we’’ll just get right down to business. While they’d definitely “Sting” your wallet, the Roxannes make it obvious that they’ve effortlessly withstood the test of time.

Aesthetics (8.5/10): The Roxannes are beautiful, with JH Audio tastefully implementing a Carbon Fibre faceplate upon a dark, translucent, smoke grey shell, proudly displaying her 12 drivers in all their beauty. Upon the CF faceplates, perch JH’s signature logo on one side, and “Roxanne” in cursive red on the other.

Build Quality (10/10): I’d hesitate to give anything other than a perfect score to the Roxannes for their sturdiness. “Handmade in the USA” has always been a big part of JH’s marketing, and does show in the build quality of their products. Strong and tough shells, proprietary 4-pin cable design with a locking mechanism, and reinforced braided stock cables. I’d doubt it gets any better than this.

Fit and Comfort (9/10): While the sheer size of the Roxannes (any version of them) may have elicited complaints from many in the Community, my ears have perhaps been blessed by Jerry Harvey himself, given the Roxannes fit amazingly well for me, and I often forget they’re even there. Be warned, however, given they’re still behemoths compared to most offerings on the market, and will not sit flush in your ears, and instead protrude a fair bit. The memory wire is not a significant issue as it only encompasses a small part of the braided wire. Auditions before purchase are of utmost importance.

Isolation (9/10): Excellent isolation, blocking out almost all of the noise present on public transportation.

In short, the bass tuning port works. Using the included tuning tool, bass can be varied for both left and right earpieces respectively, with up to 5 recommended configurations, 8, 10, 12, 2 and 4 o’clock. In essence, each notch adds more bass (both sub and mid), as well as emphasising and warming the lower mids.

At 8 o’clock, the Roxanne sounds almost slightly bass-light in nature. The Roxane still hits with good texture and impact, but quantity just isn’t sufficient for me. Lower mids are more recessed compared to the upper mids, which are perceptually more forward due to the lower treble boost being more prominent. In this configuration, you can expect clearer, cleaner sound, at the cost of a less musical presentation.

At 4 o’clock, the Roxannes are a different beast all together. Bass quickly becomes the emphasis of the show, as it is pushed all the way in front with tremendous impact and power. The lower mids warm up significantly and become quite thick, losing some speed in the process. The upper mids are now recessed relative to the rest of the mix, with the lower treble boost dialled down slightly comparatively.

As you can tell, the bass port does make the Roxannes extremely versatile, almost making it an IEM with two distinctive sonic signatures.

This review will be based on the Roxannes with the bass adjustment port set at 12 o’clock, what I consider to be the most balanced tuning.

Bass (9.5/10): While I’ve always been a huge proponent of Dynamic Drivers over Balanced Armatures for lower frequencies, the bass on the Roxannes pokes holes at the aforementioned argument. The bass goes as low as sets like the IER-Z1R, and produces similar deep, thunderous rumble on tracks like “Royals” by Lorde.

Midbass slam and impact is more than comparable to the best dynamic drivers out there for tracks like Muse’s “Neutron Star Collision”, which also showcases the sheer speed the Roxannes are capable of while carrying such weight. Midbass bleed into the mids is almost non-existent, it’s clean with little bloat.

Bass never feels slow, instead managing to be resolving while still maintaining natural decay on instruments like Drums or Cellos. It’s extremely detailed, basslines are full and authoritative, while achieving refined texture like that of a Dynamic Driver. Simply fantastic bass.

Mids (8.5/10): The Roxannes belt her lungs out in the midrange department, presenting accomplished male and female vocals alike. The midrange is resolving and detailed, though not quite “in-your-face” in the latter department, preferring to showcase them in the backdrop for listeners to pick up. Transition from bass to the midrange is flawlessly smooth. In the 12 o’clock configuration, it’s a very balanced presentation, with above average note weight.

Deep, weighty male vocals like Andrea Bocelli’s and Michael Buble’s shine on the Roxannes, as they clearly convey their weight, power and texture. The relatively thicker presentation of the lower mids never sounds sluggish or congested. While the Roxannes have a warm tilt to the midrange, female vocals are never compromised. They’re clean and sweet with good air, and have similar presence to their male counterparts, though perhaps on occasion just ever so slightly veiled by the warmth.

Highs (8.5/10): The transition from linear upper mids to slightly boosted lower treble might be slightly jarring initially (especially due to the mild sibilance present in the region), but becomes less of an issue on getting used to it. The trade-off, however, is the gobs of detail which becomes apparent on hi-hat and cymbal heavy tracks like Dire Straits’ “Sultans of Swing” or Air Supply, with some of the most natural decay I’ve had the pleasure of listening to.

Upper treble extension, though perceptually reduced by the relatively darker tuning, is similarly fantastic upon closer inspection. On the bright side, fatigue in the upper treble is a complete non-issue, and the treble is otherwise smooth barring the hint of sibilance on the lower treble.

Soundstage, Imaging, Seperation and Timbre (9/10): The Roxannes casts an amazingly wide stage which is equally matched by its depth and height, creating an out-of-head experience, a true accomplishment for any in-ear monitor. Imaging is no slouch either, with instruments getting their own pockets of space in accurate positions on stage in live recordings, though occasionally marred by the slight warm midrange tint. Complicated, messy tracks like “Little Talks” by Of Monsters and Men are also no match for the Roxannes, who breeze past them with ease. Timbre is natural from top to bottom, with instruments sounding as they should.

In case I haven’t made it obvious enough, I am in love with the Roxannes. The twelve drivers in each shell work in perfect harmony, delivering a big, bold sound that is musical yet detailed. Their warm and slightly dark tint may not be for everyone, especially listeners who prize absolute clarity and detail. If they match your preferred signature however, and their price and size aren’t enough to deter you, they’re a definite keeper, even after all these years.
Pros: Unreal Bass punch,
Cons: poor fit, comfort, a little veiled treble
Isolation is excellent with the spinfit tips, Bass response is just like no other I've ever tried, it almost literally blows you away with the punch and quick decay. prolly a little too punchy. but at $1350 i paid i expected a lot more from this iem. theres nothing special in the midrange n treble. midrange esp vocals is not rich/lush enough for my taste. treble is just a plain veiled boredom. imaging is average. I rather pay for a c6iem at half the price which offers similar sound signature n overall technicalities
Reactions: aafanatic and rulsboris
Pros: The full frequency range is there, with nothing missing, according to my ears
Cons: Bulkiness (but then there are 12 BA drivers per side), Cost (but then if they are the best)
I have to say, when I first saw them, 12 bands per driver! Isn't that a bit over the top? But after listening to a demoed pair for just 5 mins with my iPod, I bought a pair, they are really that good! I got the AKR03 version though, not sure if they are the same as the JH Audio version. 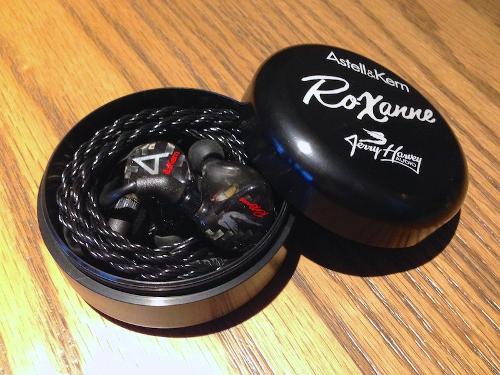 Danz03
Come to Hong Kong, they are on demo at DMA, can also try them with balanced cables with the AK240 too. The cable connectors are very nice but are made of plastic, not sure what would happen if they cracked, I was told one cannot buy the balanced cables as an option at the moment. The Shure SE846 connectors in comparison look much more rugged, but then the SE846 connections are much more simple, only 2 contacts per channel, whereas the AKR03 have 4 per channel.

qveda
looking to get my first really great pair of IEMs.  Roxannes or JF16's ( or Cardas if I can't swing the cost).   Roxannes are universal, correct?  Do they need to make a really tight seal in your ear to get the full sound?  Some (inexpensive universals) don't fit well in my ears.  Without demo'ing, I guess I'd need to find out about return policies. But the Roxanne's sure get rave reviews - even with universal fit.

Danz03
The Roxanne comes in 3 different versions apparently, custom, universal and as AKR03 universal. According to what I was told, the AKR03 were tuned more similar to the custom version. My only experience with custom IEMs were the UE 18Pro, which put me off customs for good. To me, the only advantages of custom made IEMs are that they fit your ears perfectly, are very comfortable and very unlikely that they would come off during a live performance, which they are primirarily designed for. They don't necessarily have better sound isolation than universals. Also with universals, you can somehow change the sound signature a little with various tips, whereas there isn't much you can do with customs physically. The Roxanne are so huge I doubt anyone would want to use them for live performance purpose, no matter how well they fit. Although they are huge, the AKR03 seem to fit in my ears quite well, and I have small to medium size ear canals. You really should demo them before making a decision in purchasing them. Another great ones to try are the Shure SE846, I think they have similar sound signatures (SE846 with the standard nozzle), except the highs are more defined with the AKR03. I wasn't able to do a comparison yet as my AKR03 have some weird phasing in the high mids and treble, more so when used with balanced out from the AK240. After about 10 hours of burning in, the phasing seems to have lessen, so I will let them burn in for another 10 hrs or so before I'd listen to them again.
Read more…