Loading…
Pros: Black background, goodbye weird noise peaks, second to none noise floor level, sound consistence, greater clarity, detail and sound spatiality
Cons: It heats up a lot when drawing 900mAh
This unit has been lent for review by iFi Audio and AT Consumers. By no means the thoughts and insights portrayed in this review are biased. These are my honest thoughts about it.


Introduction: The iFi iGalvanic3.0 is a device that completely breaks the noise channel of your computer, it is like a water purifier filter that does not allow impurities to pass through. Not a single one!

Unlike the iUSB3.0, which regenerates the water flow and reduces some impurities, the iGalvanic3.0 completely cleans the current, although it is true that it does not allow so much current to flow as it is self-powered. 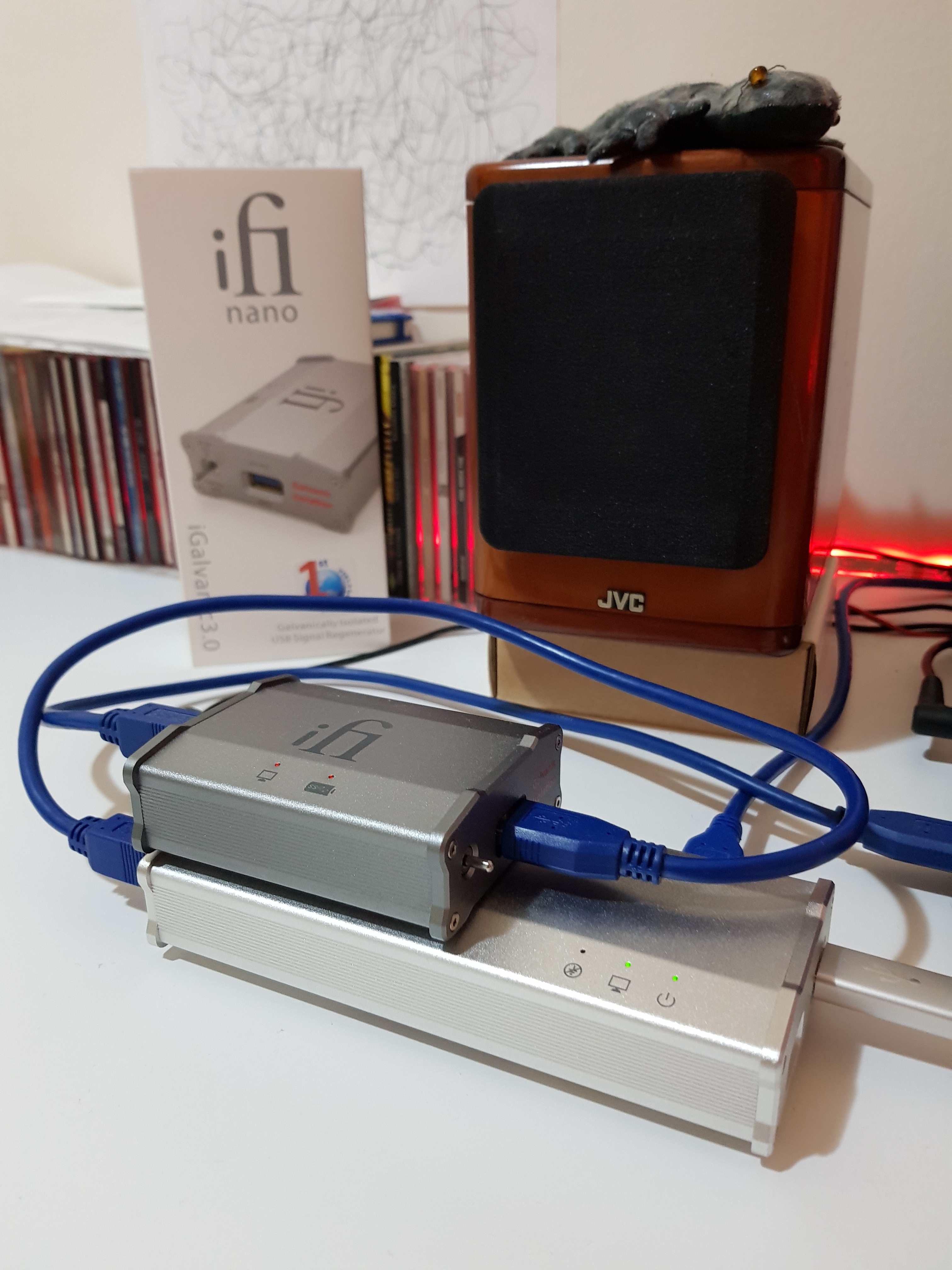 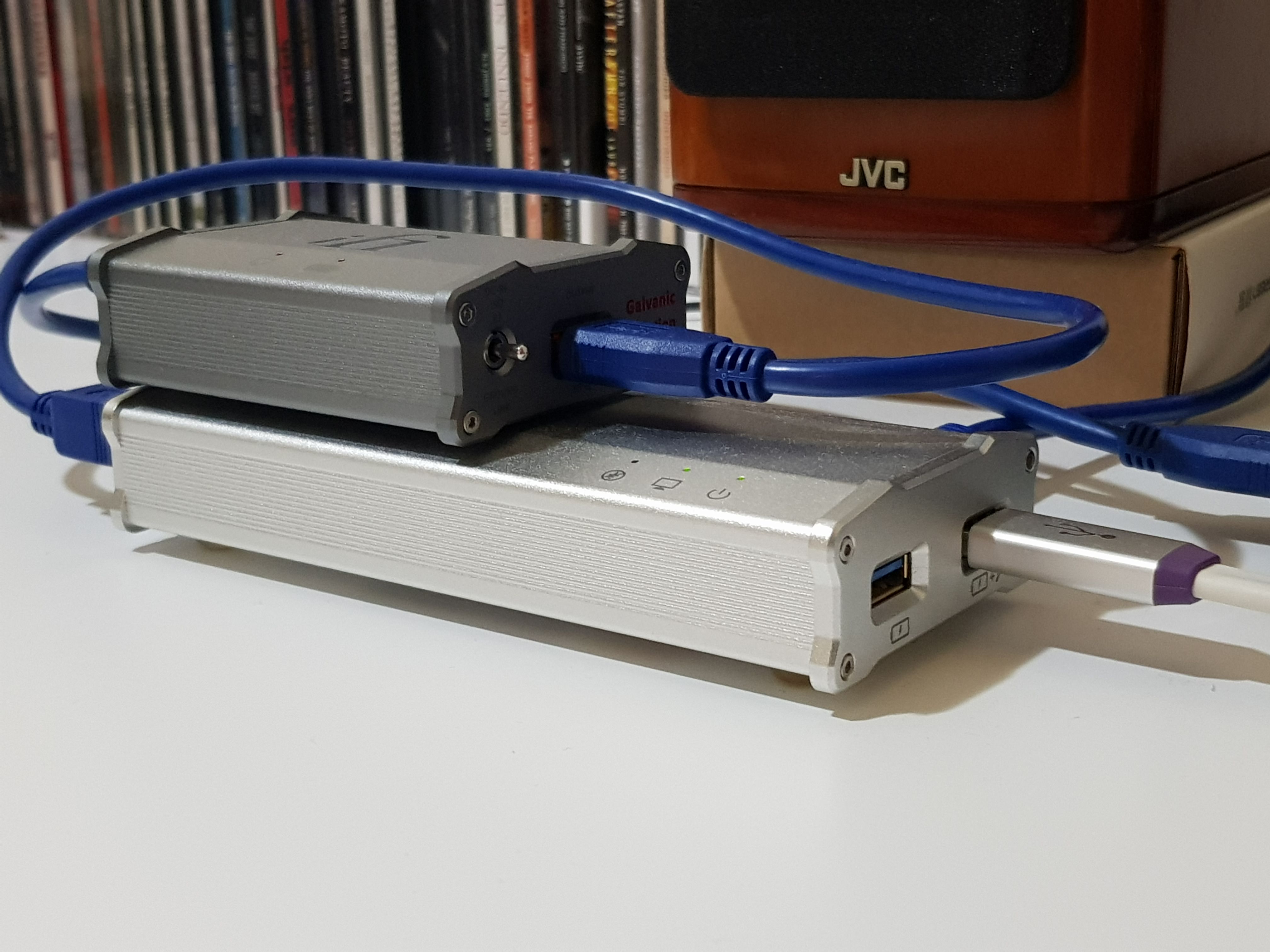 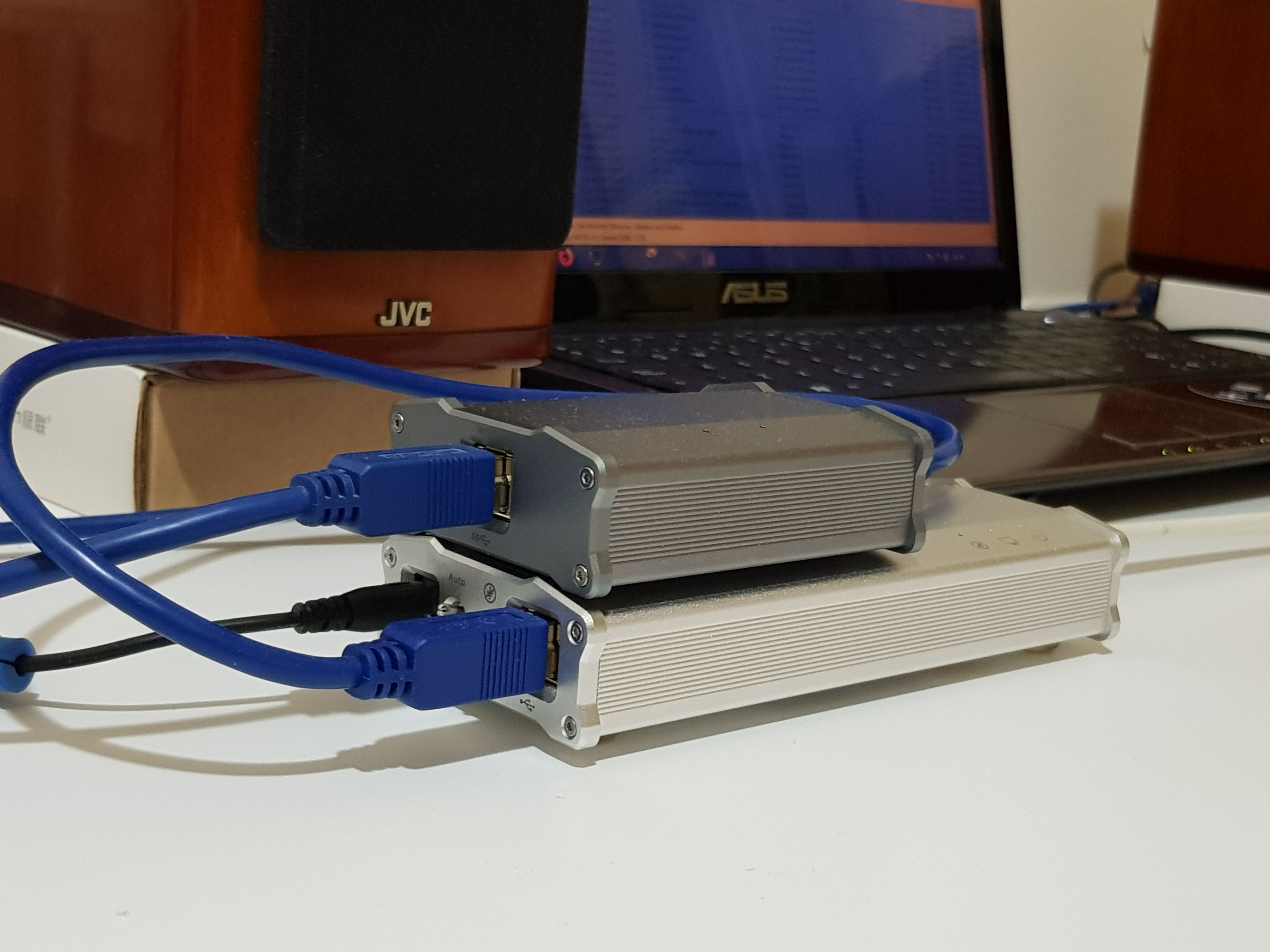 How does it work?:

Breaking the ground connection in an audio equipment significantly reduces the noise level, but the USB standard does not work properly in the absence of ground connection, that is the reason why this device exists. Between the entrance and the exit of this device is the galvanic isolation: a wall of thousands of meters of height by which NO ONE can jump. And in the middle is the security gateway, controlled by a microcontroller. It exclusively allows the data to go through and blocks any type of noise greater than 0,5uV with absolute control.

The microcontroller contains a proprietary iFi algorithm to send the packets to the output with impulse, firm step and without getting lumpy (i.e. REclock, REgen2 and REbalance) 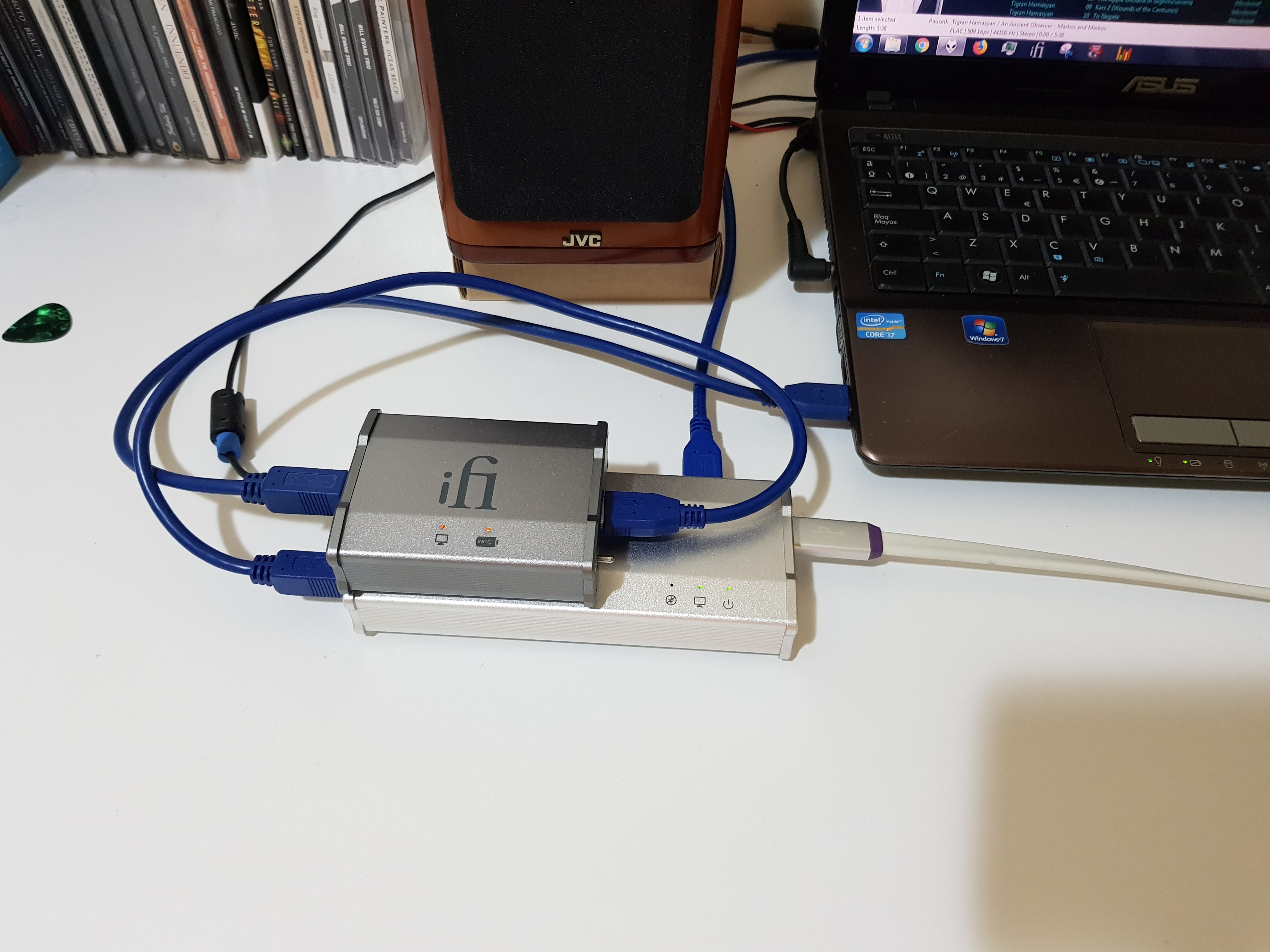 Now our DAC receives the data with absolute precision and ... does that affect the sound?

In this tricky subject that is audio, each setup is a world. But knowing the effect that this device achieves, we can expect sound free of background noise, wider sound scene, more detail and less auditory fatigue in long listening periods: And it is exactly what I have perceived 100% of the time. 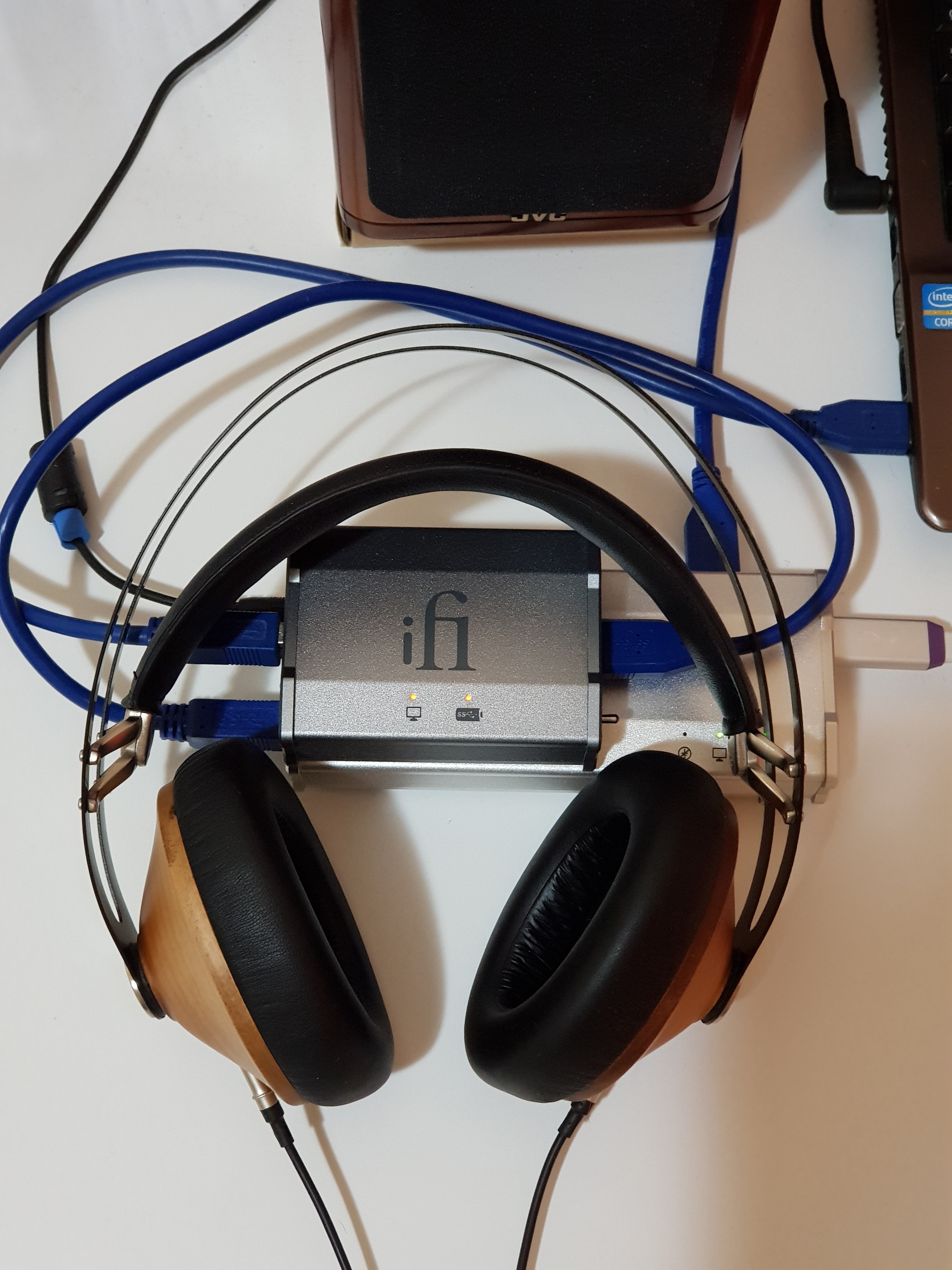 My audio setup already had an iFi micro iUSB3.0, so, the effect of the iGalvanic3.0 was not so shocking Even so, with my iFi micro iDSD and Meze 99 Classics I perceived a pure black sound background and when making measurements with this iGalvanic3.0, I noticed the defects of my measuring equipment and noise circulation problems in my measurement method.

I will not show the results for that reason but 100% of the time I put the iGalvanic3.0 to power my audio interface for the measurements, the noise floor results had zero strange noise peaks. All audible frequencies remain pristine, and even up to 40kHz (testing with high sampling rates) 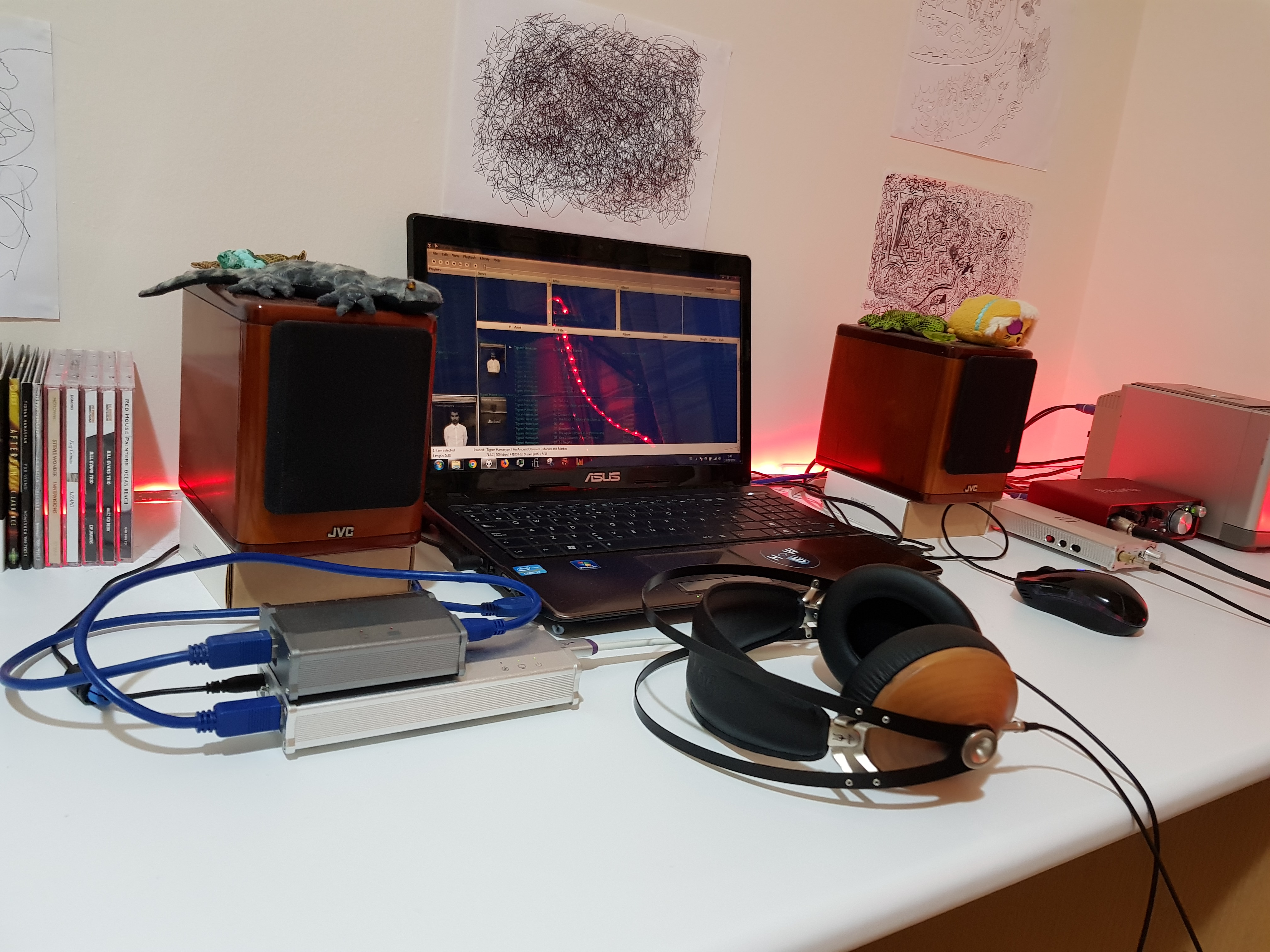 As I said in the previous section, black background, and a second to none noise floor level and sound consistence. The effect of this device is also perceived through greater clarity, detail and sound spatiality. Everything gains a greater dimension, achieving practically the same effect as the iFi micro iUSB3.0, but a bit further.

And something really interesting is that as a musician, when recording by microphone or my bass guitar and electric guitar, the sound is much cleaner any problem of lack of ground or isolation in my instruments is no longer so relevant. 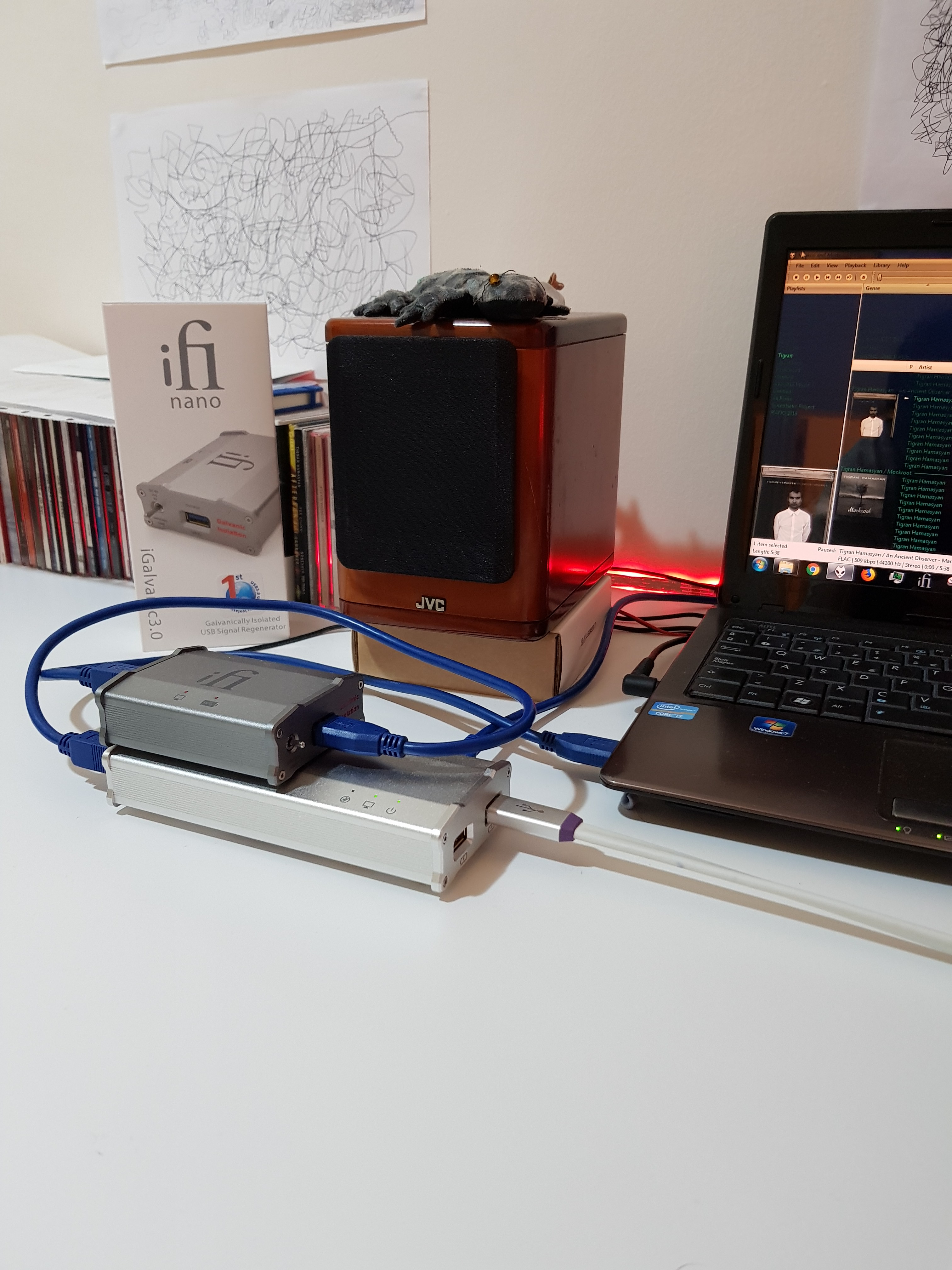 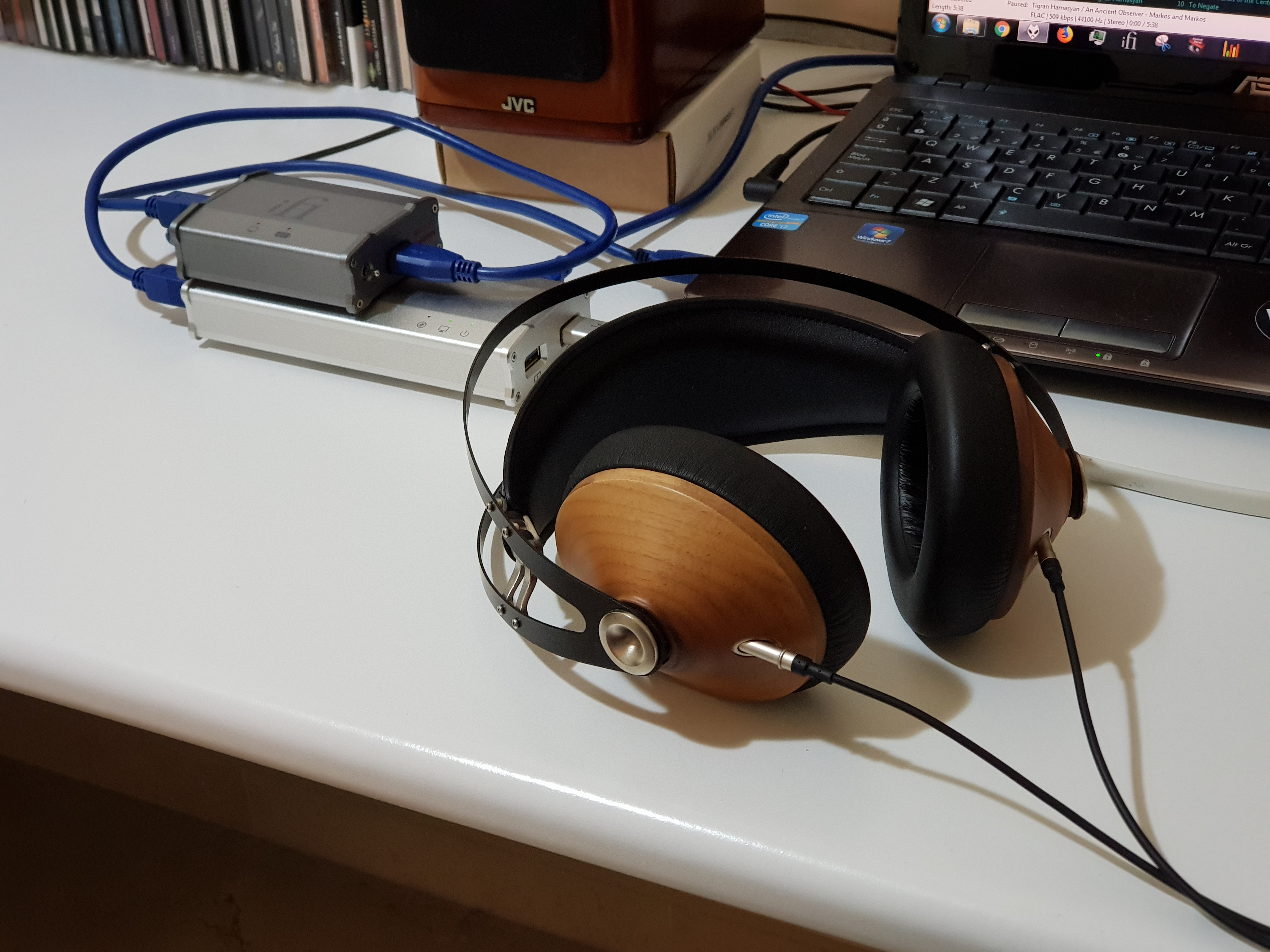 If you have a noisy computer for your audio setup, this device will make a HUGE improvement. But don't forget that audio is like seeking a balanced and rich diet: Music is raw food, headphones and speakers are the chefs, the DAC sets the recipe, amplifiers cook the food and power supplies are the motivation and spirit behind everything. A better way of sending the recipe to the DAC is a great improvement but if the chef is bad, there's not so many room for improvement.
Reactions: Dionietzscheus
Pros: Small
Affordable
Consistently improves sound quality on all systems
Easy to use
Cons: The word "gremlins" on the back of the box makes it look like it's selling a placebo effect. IMO. 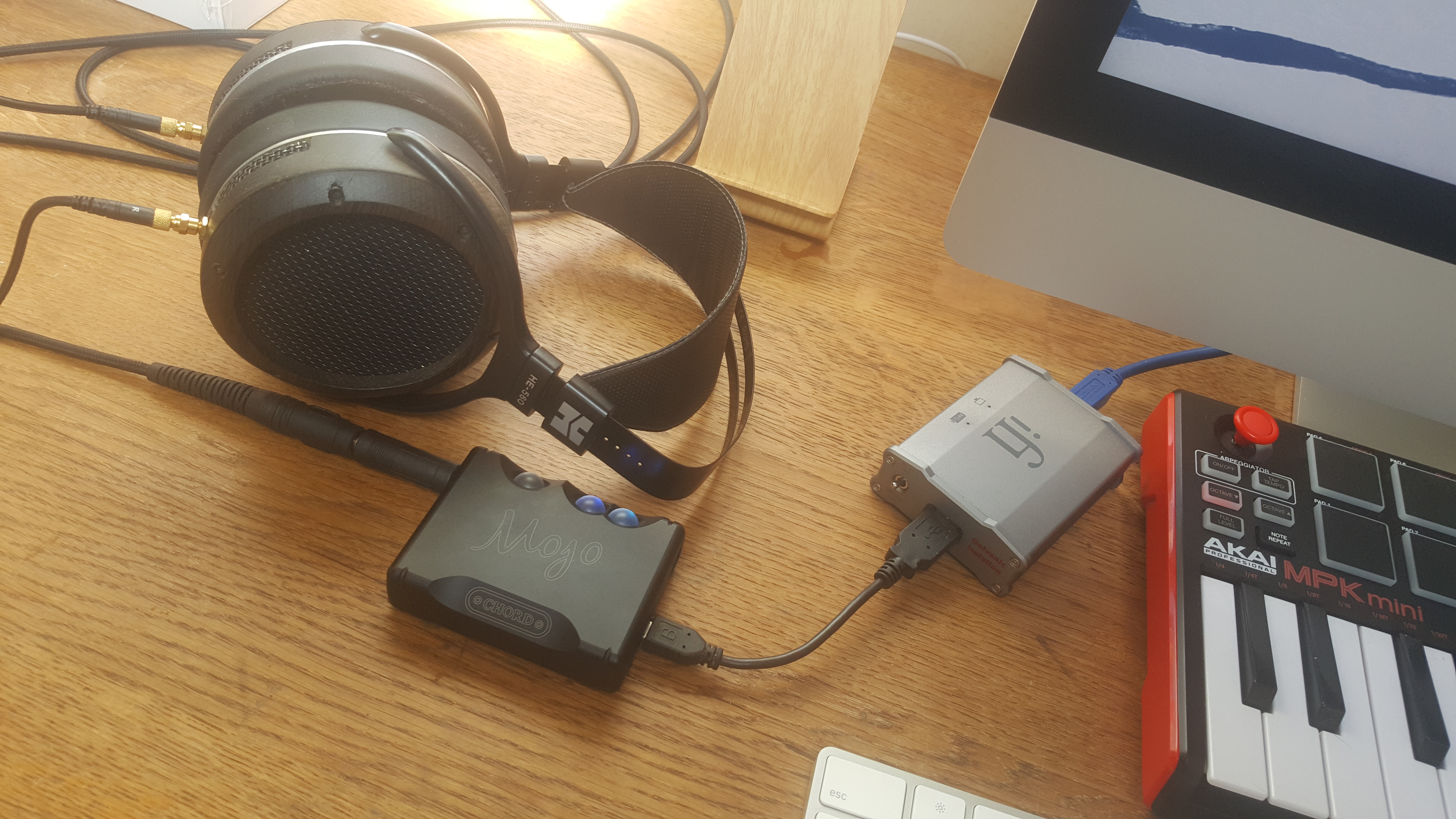 The iGalvanic3.0 is a "Galvanically Isolated USB Signal Regenerator" At least that's what the box says...

What does that mean? Why would you want that? Who's this aimed at? Is it worth the money, or it is just another scam designed to separate audiophiles from their money?

Before I answer those questions, a bit about me:

I'm a musician, producer and composer. I am just finishing a masters in composition, and will be scoring a show on Netflix in the next few months. I have spent my entire life in studios, listing to speakers that cost more than your car. Sound is VERY important to me. However...

I'm not the sort of person that just accepts advertising spin as fact. Frankly, I'm usually someone that is more sceptical than the average audiophile. When I see £10,000 power strips, I assume they're designed for people with more money than sense. In fact my goto audiophile joke revolves around bags of magic rocks - yours for only $170 - that do nothing more than make some conmen a bit of cash.

So, when iFi asked if I'd like to review something else, after my iFi Nano iDSD review, I was pretty sure I'd screwed up when I asked to review the iGalvonic3.0.

I mean, c'mon, USB conditioning, Galvanic Isolation... sure the box even says it kills "gremlins"... surely this is some sort of non-audible money grab... right?

Although that wasn't immediately obvious.

When I first plugged it in - with my chord Mojo and my "Batman" HE-560s - I wasn't blown away. In fact I was absolutely certain it was a "magic box" that did a sum total of nothing. I had visions of having to tell Karina from ISI that I would have to send it back, because I couldn't "say something nice".

Then, I took it out of line, and went back to just the Mojo.

I went through probably 20 songs from a variety of artists (everything from Elliot Smith to Superorganism to DSD versions of Nordic Sound Reference disc) and... yeah, it's not placebo, I could EASILY pick out the iGalvanic - every single time - and it ALWAYS sounded better.

So, what does better mean?

Well, I also watched a bit of the Last Jedi and it was then that I REALLY was able to pinpoint what I was hearing.

First, everything is more defined. There's more space between sounds, and that in turn makes everything sound more real. Nothing is mushed together. That's an eye opener.

But more importantly bass is more defined and present, and high end - think the glass windows breaking on the casino planet in Last Jedi - is CRISP, without becoming strident or overwhelming.

In the systems I then tried it on (3) the top position seemed to sound the most open, but frankly THAT could've been ear fatigue and confirmation bias...

What was NOT confirmation bias was the distinct and only-positive change in sound.

Now let's be honest, ok? Who is this for?

Well, I would PERSONALLY say that this is a 5-10% boost in sound quality, something you leave in line, and never think about. It's just a final touch to your digital signal flow... It's neither wildly expensive or wildly cheap, but... if you want to get the ABSOLUTE best out of your system, you NEED to check this out.

Like the iDSD Nano, this is probably positioned really well in the market, and will probably be - and justifiably so - a big seller for them.

This is not stop 1 in your search for amazing sound. This is stop 3-4.

Get your monitoring sorted, and your amp and DAC, and THEN buy this, because frankly, the better your system the more you'll get out of this.

I recently spent a few grand updating my work machine and so can't take the plunge on this today, or tomorrow, but as soon as I have a bit of spare cash, I'll be buying one. Maybe even 2. 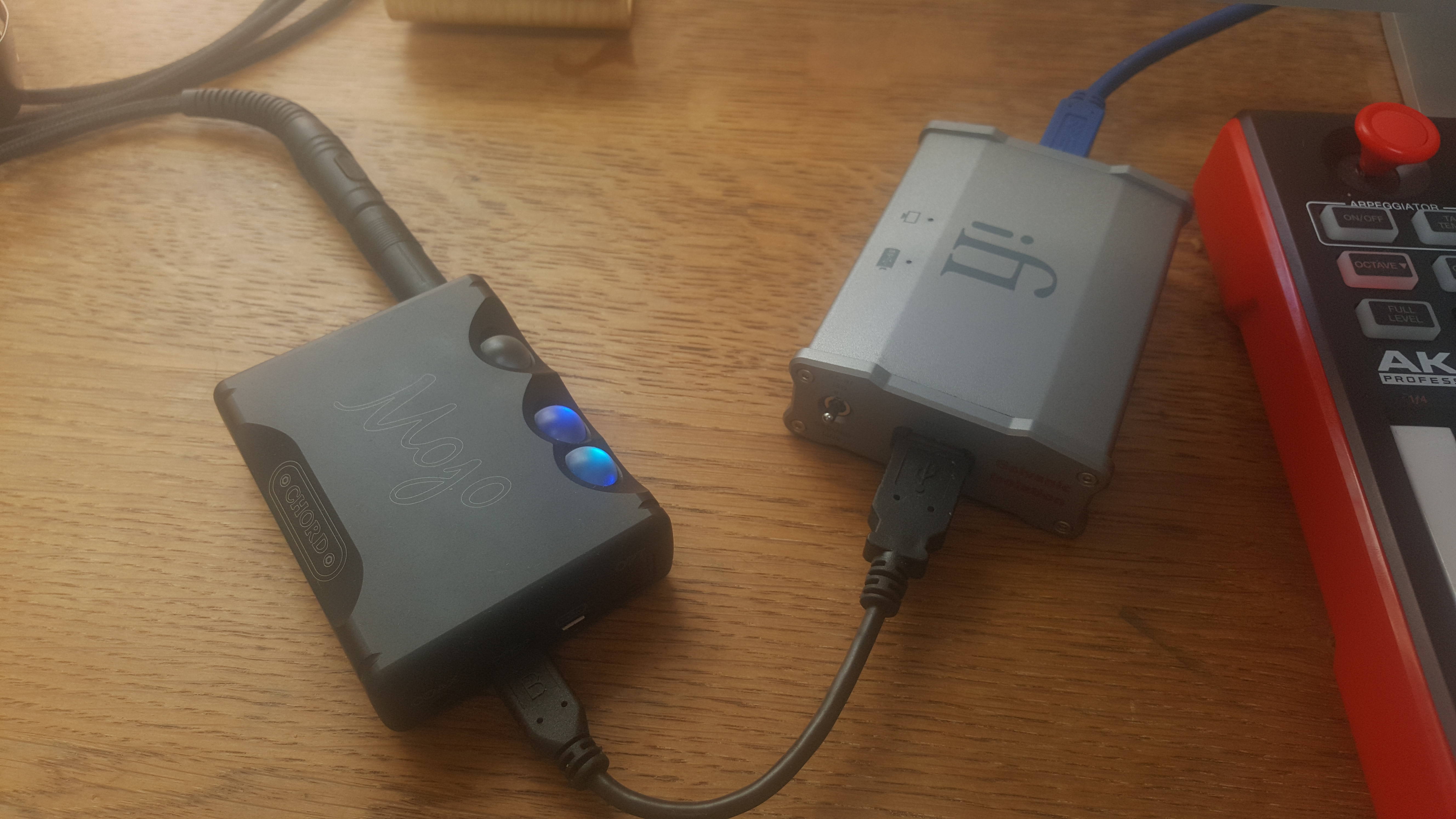 Oh one last thing, I said I'd tell you how this worked... that was a bad choice on my part as I don't REALLY know how it works, and frankly I don't really care. It DOES work, that's the bottom line. It does the same thing on all my systems, and however it works is sort of beside the point IMO. Besides a quick google will turn up reviews with graphs and intense technical explanations... I could copy and paste them here for you, but I couldn't defend them, so what's the point?

Essentially though, it makes sure the USB signal your DAC is getting is as pure as possible. Which sounds mad, but the proof is in the pudding.

I was loaned the iGlavanic3.0 in exchange for a review. No one asked me to lie or suggested any talking points, nor did anyone from iFi review this before I posted it. I was given nothing in return for the review except the loan of the iGalvanic, which is packaged up and ready to - sadly - ship back to Karina and the rest of the lovely iFi folks. My opinion is that iFi makes extremely good gear for the price, no matter what price point you're looking at, and they are active on here and elsewhere online, making them an easy company to get support from. I have no issues recommending their gear to other audio pros.
Reactions: Dionietzscheus, Luvdac, Condocondor and 2 others