Loading…
Pros: Affordable, can be very effective in certain circumstances, helped me solve a seemingly impossible issue
Cons: Unpredictable - in many situations I did not hear any impact
Quick note - this is part two of a series covering various tweaks from iFi Audio. Part one focused on the Gemini3.0 dual head USB cable while the next post will cover the DC iPurifier2.

The focus of this installment is the iSilencer3.0, which is a $49 "USB Noise Eliminator". iFi promises the device will cancel noise via their "Active Noise Cancellation+" technology, as well as reduce jitter and "re align" the USB signal via their "RE Balance" feature. As with all iFi gear, I've learned to not get overwhelmed by the marketing terms and just listen for myself before passing judgement.

Conceptually, the device couldn't be simpler: a small dongle which plugs into any standard USB port on your computer/music server/etc and removes noise from the signal as it passes through to the DAC. It can also act as a filter between a playback machine and external hard drive where a music library is stored. Lastly, it can be plugged into any empty USB port and supposedly still bring a minor benefit, though I'm not quite clear on how that might work.

Cutting to the chase on this review - I found the iSilencer3.0 to be beneficial in some circumstances, while in other cases it didn't do much of anything. Which is pretty much par for the course for a device of this nature. Different situations yield dramatically different results, and it's fairly unpredictable - the places I thought it would make a noticeable impact, I was let down, while other applications yielded surprisingly impressive results. Thankfully the device is only $49 so it's not a huge investment to run your own experiments. 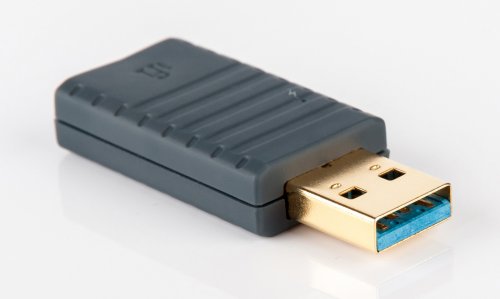 After trying the iSilencer3.0 with many different combinations of source and DAC, I heard the most significant impact with my Asustor NAS which doubles as a surprisingly high quality playback device. Even without the iSilencer3.0, I'm very pleased with the sound it produces when paired with DACs ranging from $80 to $8000. The iFi adds a bit of extra focus to the image, seems to somehow improve dynamics, and contributes to the sense of blacker background - which was unexpected as the NAS already does very well in that area. Certain DACs showed the improvement more noticeably than others, as I'll discuss in a moment.

The other area where I heard a very specific improvement was when paired with an old HP workstation. This water-cooled, Xeon-based, 6 core/12 thread monster just refuses to die, and has cycled through from being my main PC to a media server to a photo editing station (and probably some other uses I'm forgetting) over the past ~7 years without a single complaint. At the moment I have it paired with the excellent Keces Audio S3 which feeds a pair of Adam Audio F5 active monitors, and the result is very enjoyable.... with one small issue.

The problem: I get an intermittent static/buzzing noise that seems to come and go at random. The noise is not audible when using the integrated headphone output of the Keces. I've tried different DACs as well as adding a separate preamp for volume control, and the issue never went away. Which of course points to the speakers as being the culprit - except I only experience it when using them with this particular computer. The DAC itself doesn't seem to matter - it's one of those USB related gremlins that just doesn't make sense, and that fact probably bothers me more than the actual noise itself (which realistically isn't all that loud anyway). 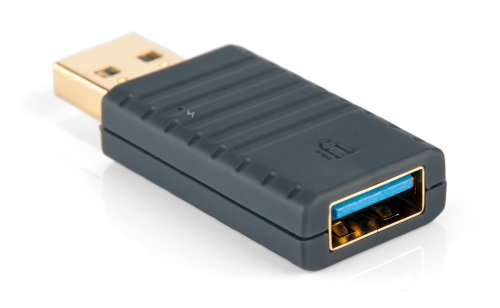 The iSilencer3.0 is the only solution that I've found which eliminates this unwanted noise. I discovered this practically by accident, but I'm thrilled to find some way of ridding my system of the buzz. Again, while my particular issue isn't all that bad in the grand scheme of things, it gives me a taste of the varied and maddeningly "unsolvable" USB audio issues I've read about on the forums for years. If it had been a louder buzz, it would basically render this workhorse PC unusable for listening purposes. By solving this problem, the iSilencer3.0 more than justified its price, even without any other significant contribution to audio quality.

My other sources include music servers from Aurender, Euphony, and Nativ, laptops from Dell and Asus, and lastly a Surface Pro 6. None of them seemed to respond well to the iSilencer3.0. There were a few moments where I thought I heard a tiny improvement, but it was small enough as to not really be worth mentioning. To put it another way... if I hadn't experienced the SQ boost on my Asustor NAS, or eliminated the buzz from my HP, this write-up would probably only be a single paragraph. 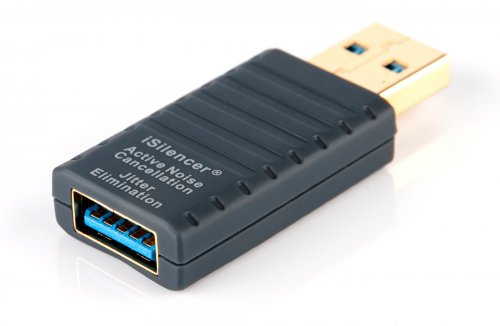 Let's talk DACs, since my results varied from one to the next. Using the Asustor NAS, I heard benefits with the Massdrop Airist R 2R DAC, the RME ADI-2 DAC, and the Exogal Comet Plus, in roughly equal measure. The Airist is very sensitive to power and USB tweaks, so I wasn't surprised there. But the Exogal and RME units both claim advanced jitter reduction and I really didn't expect them to care about the little iFi widget. I was wrong - the resulting sound was clearly improved with the iSilencer3.0 in the chain. For perspective, Exogal's upgraded $500 PSU (which turns the Comet into a Comet "Plus" version) makes a larger difference, whilst the iSilencer3.0 is more worthwhile than the $199 WyWyres umbilical cable upgrade connecting that external PSU to the DAC itself. The WyWyres umbilical makes a very, very small improvement, but it carries over regardless of transport.... the iFi upgrade is more substantial with my NAS as transport, but not very noticeable with other devices. So which is the better value? There's no easy answer.

Other DACs, like the iFi iDSD Pro and the ModWright Oppo 205, did not care one bit about the iSilencer3.0 being in the chain. Neither did my reference DACs from Resonessence Labs and Wyred4Sound. For the latter, I even cranked the built-in jitter reduction all the way to its lowest setting, and still couldn't hear any impact whatsoever. This applied whether using an expensive music server or pedestrian laptop.


Bottom line - does the iSilencer3.0 really work? The best answer I can give is "sometimes". Based on my results, using certain sources with certain DACs, it has the potential to make what I'd call a significant and worthwhile impact. On the flip side, that result is by no means guaranteed, again based on my observations with various source/DAC combinations. Other iFi gadgets such as the DC iPurifier2 or the iPurifier3 USB seem to offer more consistent results, though it comes at double the price (or more) of the iSilencer3.0.... and of course all of these can be mixed and matched to potentially compound the improvement. In the end it really comes down to trial and error, and unfortunately that's something each person needs to to try for themselves.
Pros: Noticeable noise reduction at a low cost
Cons: none for the price
Firstly I would like to thank iFi Audio for loaning me this device for review, I do not think it benefits from burn-in but nonetheless it has been used for well over 100hrs. 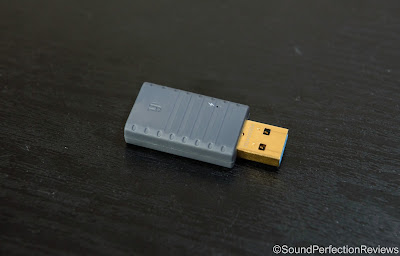 Packaging and Build quality:
The iSilencer 3.0 comes in a very small white iFi branded box, the box has info and specs on the back. It is small, simple and attractive in the typical iFi styling. The iSilencer 3.0 is held in a foam insert inside the box.

The iSilencer 3.0 is very well made, both USB sockets are sturdy and tight, the outer plastic casing is covered in a soft rubber like material. There is a small LED light on it that shows it is on, and there is nothing on it that can really go wrong. 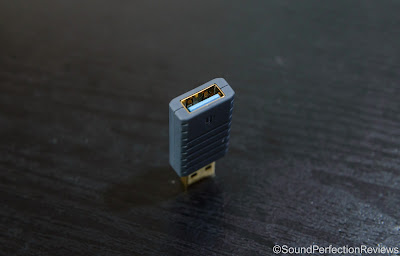 What it does:
The iSilencer 3.0 has a standard female USB on one end, and male USB on the other. It is designed to go before your cable as it plugs into your PC, it is slim in size so does not interfere with other USB cables that may be plugged in next to it.

According to iFi it has the following features:

Also iFi state that it doesn’t just work on the port you have it plugged into due to most USB boards sharing the same power BUS. Also if you have 2 iSilencer 3.0’s it will double the noise reduction. 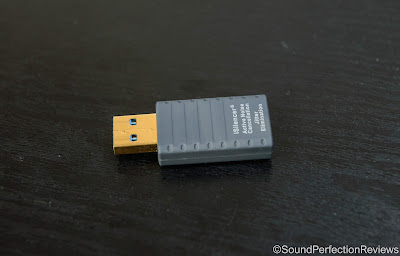 Sound:
The iSilencer 3.0 is not designed to alter the sound, it is designed to reduce noise from USB ports which is a real issue when it comes to audio playback. Now I do not find myself having too many noise issues with my setup, but there is always room for improvement. The iSilencer 3.0 is less than £50 and fixes a very real issue, the sound becomes better separated with a quieter background, and I found that it almost made it sound like there was better dynamic range.

Details became a tiny bit more apparent and there was a more focussed image and soundstage. Now these differences are not night and day, they are very subtle in my system. Your mileage may vary as it all depends on how noisy your USB ports are, but even with fairly clean ones this little device can bring a slight improvement. 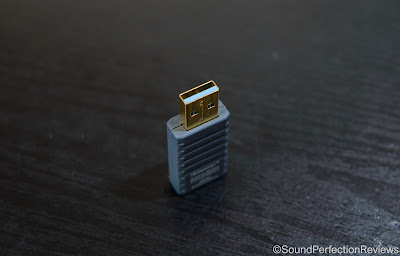 Conclusion: I’m not going to say the iSilencer 3.0 is a magical device that will solve all your USB issues, but to reduce jitter and noise in a small form factor for a great price, the iSilencer 3.0 is well worth looking in to. It is well built, backed up by excellent support and customer service from a company that knows what they are doing. For £49 it is less than some audiophile USB cables, and will likely bring more improvement.