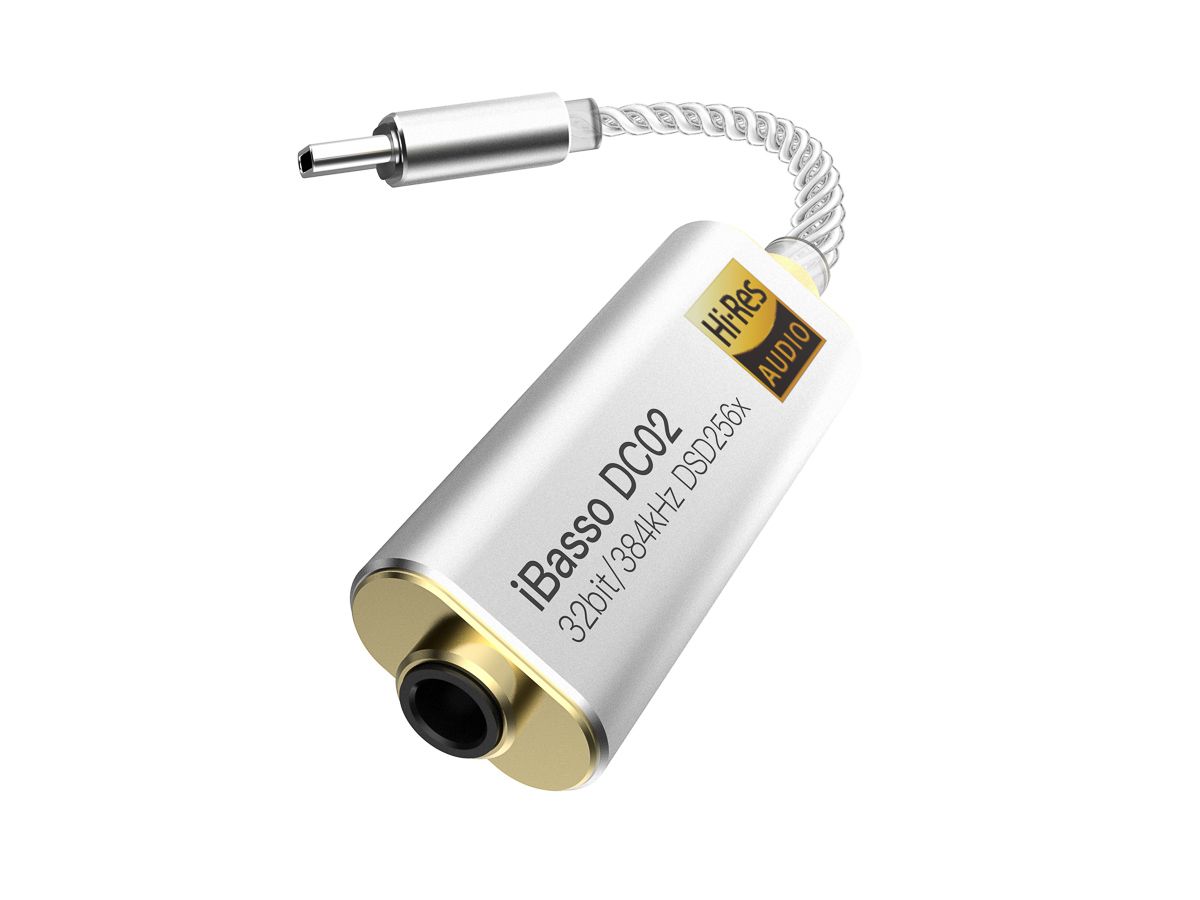 Pros: Exciting & fun sound
Good detail retrieval
High performance/price value
iBasso UAC app
Good aesthetics and build quality
Included USB-C to USB-A adapter
Cons: Grainy sound
I would like it to use AK4493 like DC01
Removing the 3.5mm headphone jack from smartphones was an absolute mistake, period. And while I still blame Apple for that, it actually caused dongles like iBasso DC02 to be made. It's the little and unbalanced brother of iBasso DC01 and uses an AK4490 chip, which can natively play DSD files up to DSD256.

DC02's sound signature is exciting and fun overally while being a bit grainy, which is not necessarily a bad thing, as it can help the sound to remain exciting. However it can be too much depending on volume or song.

Android's native SQ is horrible (and resamples everything to 48KHz). But apart from that, one of its biggest problems is volume controlling which not only has "just" 15 steps, but uses an algorithm which changes the volume level in software level, that really hurts the SQ. Audiophile players use custom drivers to overcome the SQ problem, but only 2 players provide more volume steps AFAIK: Poweramp and UAPP, each with its own problems. To overcome this, iBasso has designed an application named iBasso UAC that provides 64-step bit-perfect volume controlling. The best thing about it is that you can use it along with your favourite player's custom driver.

Finally the USB-C to USB-A adapter lets you connect DC02 (or any other dongles) to PCs or even microUSB devices using an OTG cable.

I think it's been one of my best purchases till now. Highly recommended!
Reactions: zachmal
Pros: Good sound quality and resolution
portable
well built
Cons: A little pricey vs budget competition
USB-C HEADPHONE ADAPTERS: IBASSO VS APPLE VS RAZER THX 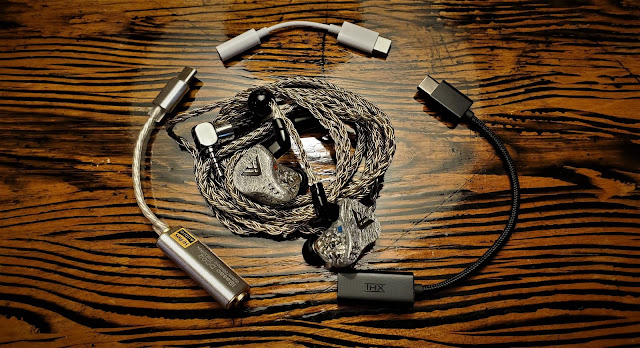 I personally have gotten used to life without the 3.5mm jack in my phone, using a combination of a Bluetooth amp/dac adapter, a separate digital audio player, and least likely, the USB-C adapters. That said, I am not reviewing them.

First off, the iBasso DC-02 was provided free of charge to me by HifiGo Audio store. The Apple USB-C and Razer THX adapters were purchased by myself over the past couple years. The Apple one is a more recent purchase and it’s nice to see Apple switching over to the more universally acceptable I/O format.

On paper, the Apple and Razer devices are very limited in what their capabilities are. The iBasso does publish a lot of specs online and it looks rather impressive for a small adapter. It features the AKM 4490 DAC and plays native DSD files. So let’s take a look at how they compare, subjectively.

All of my testing was performed using a Samsung Galaxy S10e mobile phone, which ironically has a 3.5mm headphone jack. I tested the devices on the Sennheiser HD600 over-ears headphone, and the qdc Anole VX in-ear monitors.

Right off the bat, the Apple USB-C adapter seems limited by Android. I don’t know the real reason behind this but it’s been noted by others that power output is contained. This is quite true, as maxing out the Apple USB-C adapter on my Sennheiser gets it to just about the listening volume that is slightly lower than what I like to use, but with no additional headroom at all.
With both the Razer and iBasso, volume can get very loud on the Sennheiser HD600 without a problem. The iBasso adapter is a small, tiny, bit louder, but it’s a close race. 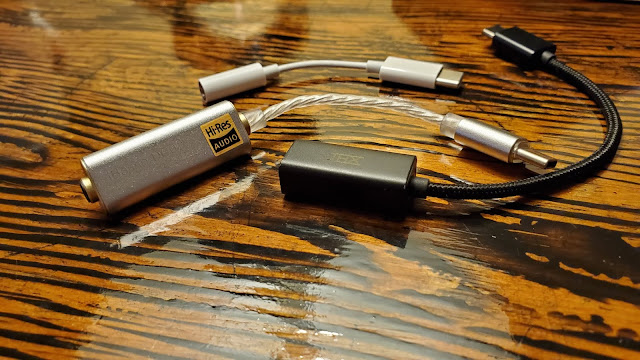 Sennheiser HD600 and “Dreams”
The Apple C adapter wasn’t a fair match when using the HD600 here since I could not volume match the two.
Now to compare the two others, the DC02 and the Razer THX, with the Sennheiser HD600, please note that I am going to be exaggerating slightly to show off the main differences in sound. It is very, very, very, very, very subtle. Very. And for many who don’t critically listen to music, you probably won’t even hear any audible differences in normal listening.

I feel like the iBasso DC02 has just a slightly brighter and airy sound than the Razer THX. It also has a small amount more resolution and detail retrieval. I hear this when I listen to “Dreams” by Fleetwood Mac. This is a song where I’ve listened to thousands and thousands of times, and is a standard for my headphone listening and reviews, since it has a variety of instruments and each playing in a rhythmic fashion on and stand out on their own. Stevie Nick’s voice is also slightly strained and has a lot of vibrato to it (that sheep “baaah” sound of the 70s and 80s) which allows me to hear very subtle differences in products.

With the DC02, I found that each hit of the drum had a small amount more impact and natural decay. The cymbals had just a small amount of splash to it but sounded clean and correct, and Nick’s voice had a little more depth and distinction to it. Again, this is on the Sennheiser HD600 and very strenuous amounts of A-B testing listening at very certain notes and details of the song.

Anole VX and “The Chain”

The qdc Anole VX is a much more sensitive in-ear monitor than the HD600 over-ear. This allowed the Apple USB-C Adapter to battle it out but on Android, again, it sounded quite limited. It got loud enough, but it just didn’t sound quite as clean, distinct and fun as the other two. The attack seemed blunted and strings in The Chain’s intro seemed to be missing a little big of the zing and texture I would expect when pairing it with a detail monster such as the VX.

The differences between the iBasso DC02 and the Razer THX were very negligible on this pairing with the VX. Both sounded excellent with the Anole VX, and while I found the DC02 to have a very slight edge on the depth and detail resolution, it was extremely subtle and mostly negligible and maybe attributed to short term memory optics switching adapters and cables.

The DC02 does seem in general to provide a slight amount more power and detail resolution, but it is also 10X the price of the hampered Apple adapter and 3.5X the price of the Razer. For Apple users or Windows 10 users, the Apple USB-C adapter kills it for price to performance, but for the more pure of audiophile nerds, the iBasso product does seem to best it out. There is also a DC01 product which is an exclusive 2.5mm balanced version with dual amps to consider as well.
Reactions: monsieurfromag3, silverak, G_T_J and 2 others

PureViewer4t1
I'd prefer iBasso over Razer, only because of its bit-perfect volume control. I have an HTC dongle which was shipped with my phone, and attenuating the volume really hurts the SQ, compared to when I connect an iFi EarBuddy and increase the volume.
Read more…

I know they haven't been out for very long, but I recently picked up both the IBasso DC02 and the new Sonata S3 to compare to one another. These are my first two DAC purchases. Im experiencing problems with both, but I'll stick to asking about the IBasso here.
Ive been in touch with IBasso customer support, but they haven't been very helpful yet. I updated the DC02 to the newest firmware and installed the newest version of UAC app from their site as per their recommendation. So far I've tested it out on my Galaxy S10+ with Neutron Player and PowerAmp Pro. Both had updates recently that added support for more IBasso devices including the DC.
The two major problems I'm experiencing is a hissing/crackling in the background, especially in Neutron and I can't seem to fix the problem. Ive tested quite a few albums and keep experiencing the same background distortion. And for some reason my phone randomly restarts itself while the DC02 is connected! Oddly enough, not while playing music, but often when i mute my music and go to do another task.
Has anyone else experienced any similar issues and/or figured out solutions with the DC02? I also noticed the DC02 gets quite warm while using it. But IBasso cs told me this is normal.
You think it's OK to connect a Atom Amp to the dc02? Or it will amplify a already amplified sound and doesn't work that well
Hope I get a reply.
Does the iBasso have an AMP?
I had a fiio x5III, so I have an idea what to expect out of the DAC. I would prefer the 4493, but hey, it's pretty cheap.

My main concern is using my Hifiman 4xx. With my MBP 2018 I get decent volume and quality right out the jack. My android can barely push it to listenable levels. Will I get an improvement there?
@And009 Yes, it does have an amp, BUT its output power is very low (25mW @ 32Ω). As your HE4XX has a sensitivity of 93dB, I don't think DC02 can drive it with reasonable volume and SQ. DC02 is better to be used with IEMs. I suggest you consider other options. Maybe AudioQuest DragonFly Black ($99) or you can go balanced with DC01 (that's rated 113mW @ 32Ω, but can drain your phone's battery quicker).