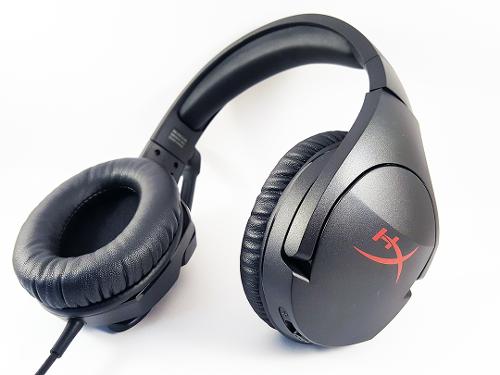 When Kingston released their HyperX Cloud gaming headset they took the gaming world by storm. With outstanding build quality, very comfortable fit, great sound and a microphone that put many of the big gaming peripheral players offerings to shame (looking at you SteelSeries) at a great price they raised the bar on what to expect from a headset. They then followed up with the Cloud II and Cloud Revolver which were both also well received. Today I'll be reviewing the Kingston HyperX Cloud Stinger.


This sample was sent to me for the purpose of this review. I do not gain financially by doing this and have no affiliation with the company. All opinions here are my own based on my personal experience with the product. I'd like to thank Weina from Kingston Technology for the opportunity to test the HyperX Cloud Stinger.

The Kingston HyperX Stinger has 50mm directional drivers, rotating ear-cups and multi-platform compatibility (PC/Mobile, Xbox/PS4/Wii U). Being a long time user of the Cloud Pro I came into this with high expectations. The Stinger is aimed more towards the budget headset segment than it's counterparts at $49.99 USD but comes with an impressive 2 year warranty.  Let's see how it fares. 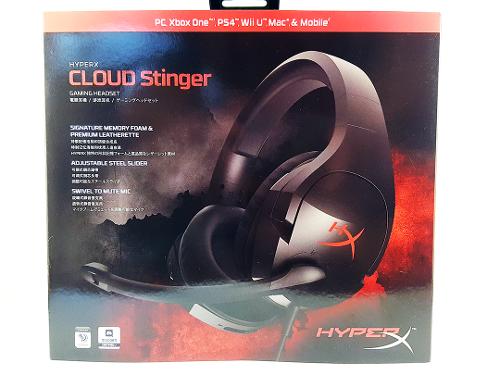 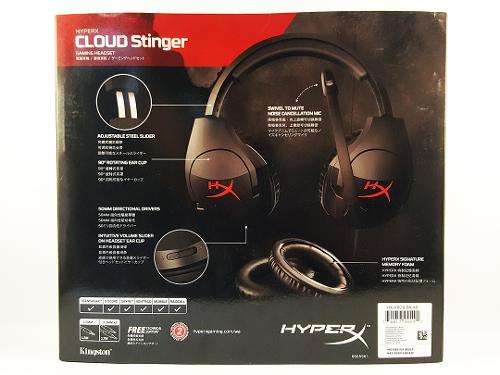 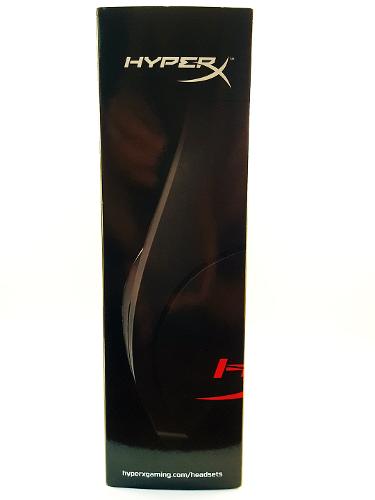 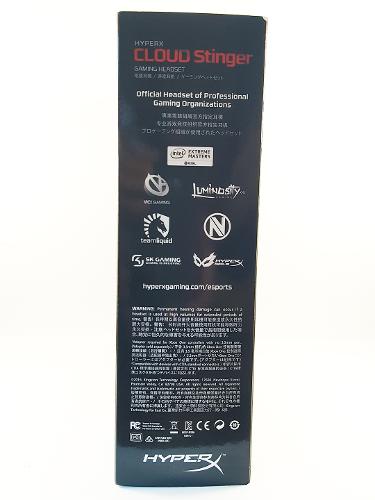 
The Stinger comes in a fairly typical gamer headset style box which is predominantly black with red accents. On the front is an image of the headset and some of the features. On the back of the box is another picture from a different viewpoint and more features again. Upon opening the box you're presented with an introductory card and a Quick Start  Guide. Removing a thin layer of black foam underneath we find the headset laid flat with the ear cups rotated at 90 degrees and seated snugly in black foam. There's also a splitter which can be attached to the cable, enabling you to connect to your computer. It's a far cry from the unboxing experience of the Cloud Pro but that's to be expected with a budget offering. 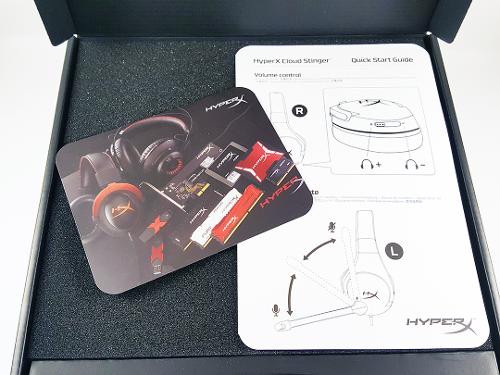 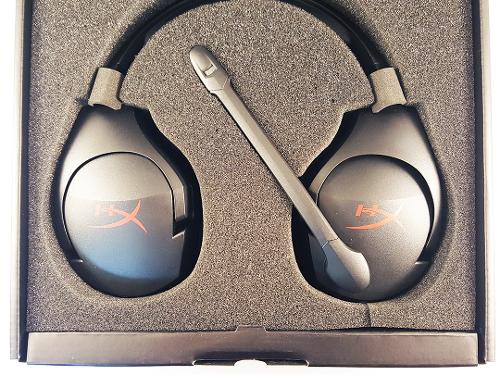 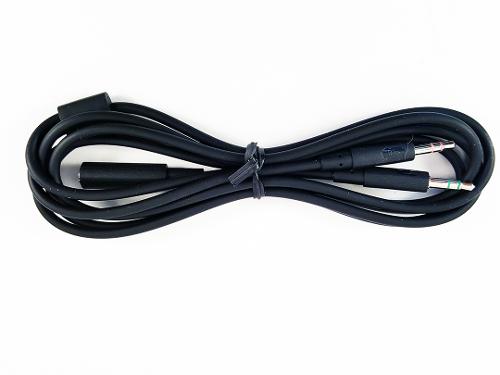 
The HyperX Cloud Stinger is made from a sturdy, matte black plastic that's very resistant to fingerprints. The headset is lightweight too, coming in at just 280 grams which along with the familiar memory foam ear pads makes them very comfortable to wear. The headband, embedded with the HyperX logo on top has foam padding on the underside and provides enough clamping force to keep the headset in place without feeling tight even during long wearing sessions. The ear cups are attached to the headband with a steel slider that has plenty of adjustment range and should accommodate most head sizes. 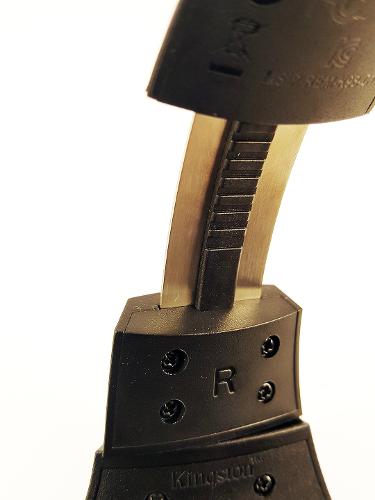 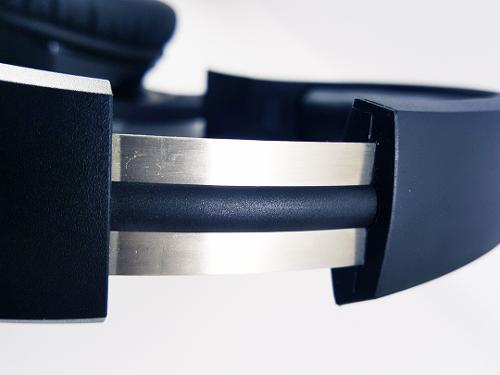 Attached to the side of the left ear cup is the non-detachable pivoting microphone. The microphone is muted when in the upright position and turns on automatically when moved into the down position which is a very handy implementation. During testing the microphone was clear and its noise cancelling feature does a pretty good job of blocking external noise. Much like all gaming headsets you probably wouldn't want to record podcasts or youtube videos with it but for gaming it's more than sufficient and still better quality than many competing headsets, much like it's predecessors in the Cloud range. 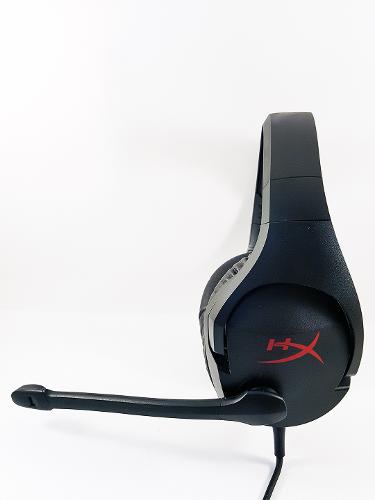 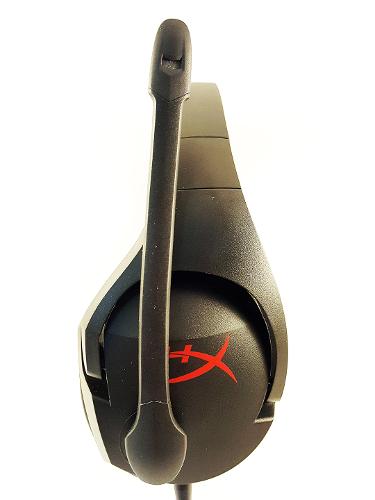 
On the bottom of the right ear cup is a volume control slider. Personally I find this more convenient than fumbling about with an in-line control. 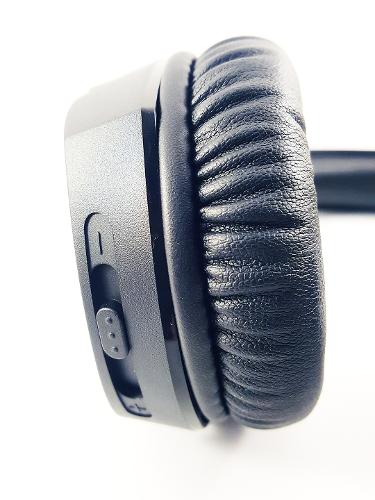 The cable on the HyperX Cloud Stinger has an average thickness for a full-sized headphone. It feels strong, yet is supple, doesn't have any kinks and doesn't feel like something you'd find on a cheap budget headset. Microphonics are minimal too so Kingston have really done well with the Stinger's cable. The ear cups swivel out 90 degrees making the headset comfortable when worn down around your neck. The earpads might look a bit thin but they're very soft and I don't find my ears touching the plastic inside the cups at all. As a result I can easily wear these for hours at a time with no discomfort. As for appearance, the Stinger still looks like a gaming headset but its nicely understated and mature. I really appreciate the restraint in the design and applaud Kingston for keeping it simple and resisting the urge to use big, bold colors, shapes and most of all I appreciate the lack of any lighting. I find lighting, particularly RGB lighting on headsets a rather absurd gimmick. I have no desire to disguise myself as a Christmas tree in front of the computer and much prefer when manufacturers focus the costs on materials, build quality and sound rather than lighting effects. 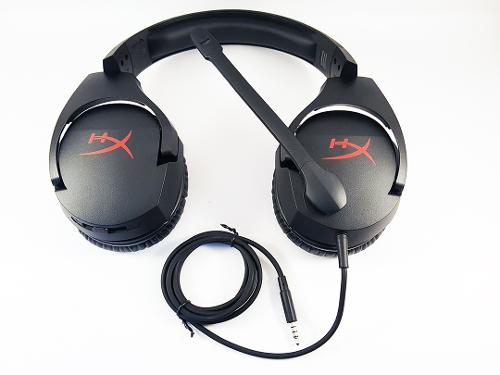 
I have to say the HyperX Cloud Stinger far exceeded my expectations when it comes to sound. While the headset is designed primarily for gaming many users will often use them for a bit of music listening and video viewing as well. Generally when it comes to budget gaming headsets I've come to expect overemphasized bass, a muddy midrange and rolled off treble. However this is not the case with the Stinger. Bass is boosted but it's still tight with fast decay and doesn't go over the top or distract from the other ranges or have any apparent bloat. The midrange is a little recessed but very clear with loads of detail and treble extension is surprisingly good while staying smooth and non-fatiguing.  These are actually quite good for some casual music listening.

The Stinger also performs very well for movies and video with enough bass to make you feel part of the action but still managing to present plenty of clarity in vocals and dialogue.

Since this headset is primarily designed for gaming you would expect it do do well in this category and indeed it does. The soundstage is fairly wide for a closed headphone which along with its fairly balanced signature allows for good imaging and 3d positioning. Explosions can feel earth shattering and bullets ping and zip by giving a good sense of immersion.


HyperX Cloud Stinger vs HyperX Cloud Pro
In terms of sound they're more similar than you might expect so Kingston seems to be sticking to their successful house sound. The Sting is slightly more relaxed in treble than the Pro which can get a bit edgy when hearing the whistle of falling bombs or the spray of debris and shrapnel from explosions. The Cloud Pro is still the more comfortable of the two and oozes quality while the Stinger in some ways feels like a lower budget product. The microphone on the Pro also seems to be better, possibly because of the foam cover, while the Stinger's microphone is left bare. That's not to say the mic on the Stinger is bad though as it is still superior to many competing headsets.

The Kingston HyperX Cloud Stinger is a sturdy, lightweight and well thought out product. It forgoes the in-line remote in favor of being able to control microphone mute and volume on the ear cups which I believe is the better solution. Sound wise the 50mm drivers perform admirably, better than you might expect for something in this price range. $50 is not chump-change but when you consider the offerings for audio IEMs in the same price range its pretty impressive what the Stinger has to offer. While not being quite as solid as the Pro or the Cloud II it is cheaper and will be appealing to gamers on a budget. I also like the fact that it isn't gaudy and doesn't try to wow you wish pointless RGB LED lighting but instead focuses on build and audio quality. I can't really find any faults with this headset so far. Perhaps the only thing I could think of is the lack of 5.1 or 7.1 surround sound but that would mean having to connect via USB or including an in-line audio processor of some kind and this would of course drive the price upwards. It's also very comfortable which for long gaming sessions is just as important as the sound quality. Overall this is a great headset and I would certainly recommend it. 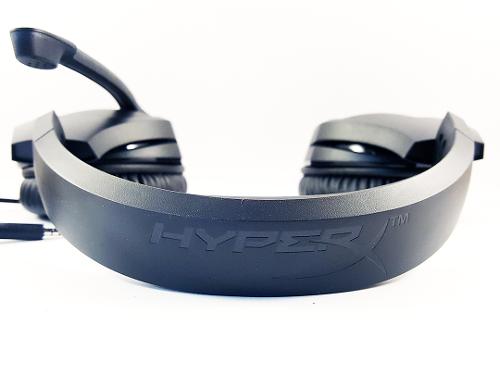 crabdog
@Lurk650 thanks man. I still prefer my Pro but these are really good.
Read more…