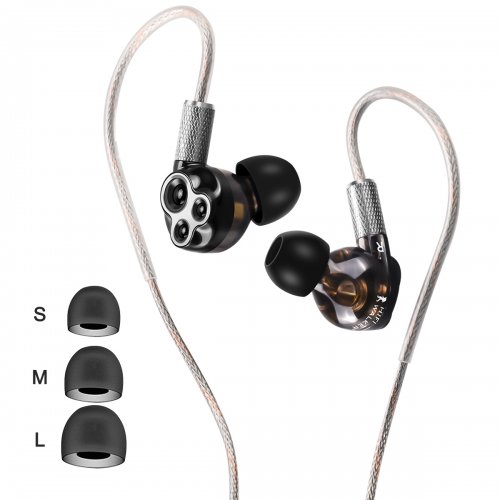 Pros: remarkable 3D presentation, natural sound
Cons: harsh mids that can get tiring
INTRO
After the BBOOOLL BO-T1, the HIFI WALKER A5 is next in-ear with 3 dynamic drivers, which I review.
HIFI WALKER has proven in the past that they are able to produce good in-ears (A1, A7) and so I was curious what they could get out of such a configuration.

HANDLING
I'm not quite sure why it's so hard for most manufacturers to put 3 dynamic drivers in one case, which isn't so controversial. The BO-T1 was already a hardship case and the A6 is hardly inferior. It reminds of spider's eyes, outdated alien technology or other organic material. But good optics plays the least role with me, if the sound is right.

The cable is not removable, but it is really good. Robust, supple and noble due to its silver sheathing under the PVC. Cable noise is negligible and the remote with microphone is top.

The A6 is worn over the ear and already has pre-bent shrink tubing earhooks. This is very comfortable to wear and also the design of the A6 itself is universal and comfortable.

The insulation is very good in combination with music, but without it the case lets through a lot of noise. On the other hand, no one will notice your music even at high volume.

SOUNDS
Three drivers means a relatively simple assignment of the individual frequency ranges. Each dynamic driver is responsible for bass, midrange and treble. This also works very well here and you can see that everyone is trying to do his job. This works sometimes more, sometimes less well.

The A6 is by no means afraid of the bass, but doesn't come along with a wooden hammer either. The bass is actually the most natural part of the sound tuning. The mid-bass is clearly accentuated and the sub-bass doesn't have the biggest expansion. However, the mid-bass is not inflated, but rather direct and precise. Only in the rarest cases does it attack the mids, which know how to defend themselves.
The bass could be too little for some, especially concerning the pressure, but I find it sufficient and above all as clean as far as possible, which is actually more important than the quantitative part. For example, the drum reproduction is really quite authentic, but sometimes a bit dull.

Unfortunately, the mids don't make it that easy. They definitely know how to assert themselves and the A5 can already be described as a middle heavy. Very driving and dynamic, but they can really roar in your face, especially in the upper part. That makes them quite tiring in the long run. Electric guitar-heavy rock music, or mostly female vocals can be a bit exhausting.
For me the A6 worked best with hip-hop and singer-songwriters with more relaxed male voices or deep female voices, but also current charts can be heard well. The quality of the source material can make the difference here.
Of course not everything is bad. The mids also do a lot right! If you leave out her harsh nature, she has a clear, slightly warm (midbass) character and manages to reproduce the sound cleanly and almost unadulterated. Also voices sound very natural. It's a pity that they act too brashly, there's more to it!

The highs have a respectable extension, even if the smallest subtleties are sometimes swallowed. They don't emulate the mids in their hard way, but try to smooth the waves a bit. I think the highs are quite successful, because they spare a lot of sibilants and exaggerated sharpness and still can make the sound carpet more lively and airy. Details come to light very well and they can also score points in the realistic representation, especially as far as cymbals are concerned.

Let's get to the A6's main attraction and that's definitely the 3D representation and the stage. Width and depth are more or less in balance here, even if they seem a bit wider than deep. The arrangement of the individual sound elements in the room is really unexpected and here you also notice the good tuning of the individual drivers, even if the mids themselves can be fine-tuned.

OUTRO
All in all, the A6 are good in-ears, even if the sound quality of the A1 and A7 cannot be achieved. You can expect good separation from the A6, a nice spatial representation, well portioned bass that rarely drifts into the mid-range and detailed, clear trebles. You have to put up with some harsh mid-range, where the ear can get tired at some point, depending on the tolerance. Here an equalizer can help.
Optically the whole thing is of course a type question!