Menu
Log in
Register
Helm Audio TW 5 - Reviews
Overview Reviews (1) Gallery
Pros: Excellent build quality, easy pairing, good isolation, reacts well to EQ.
Cons: Size may cause problems for some, Odd push button for charging, Micro-usb rather than USB C, big bass.
disclaimer: Ari with Helm Audio sent the TW 5 for review. I have no financial interest in Helm Audio, nor have I received any compensation for this review. If you have an interest in purchasing the TW 5, please contact Helm Audio at their website or their Amazon Store.

The TW 5 ships in a small lift top box with the name and an image of the earpieces on the front. The rear is mostly marketing material and unfortunately fails to list any specs for what driver or drivers are used, battery life expectations, etc.... Lifting the top, reveals the case nestled in a surround. Manuals, cable, and extra tips are all hiding under the tray. The kit is fairly standard for a Bluetooth model with a charging case, USB cable, 3 sizes of single flanged silicone tips, and the manual. The only real deviation from standard is that the tips are listed as large, small, and extra small and since the TW 5 inserts fairly deeply into the ear, it does generally require smaller tips than standard. 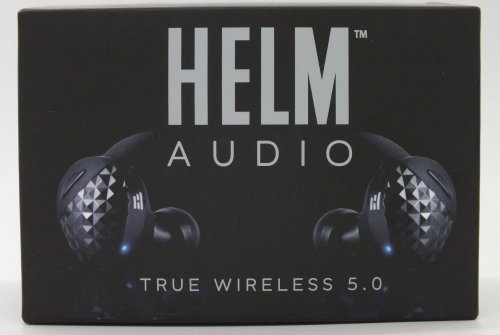 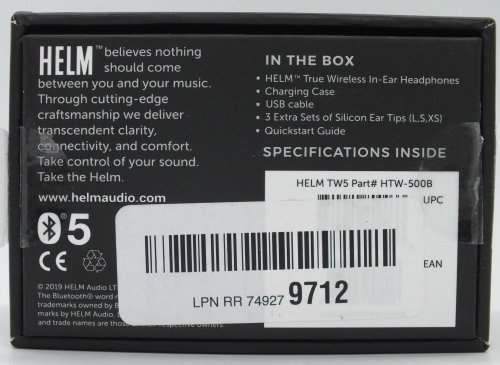 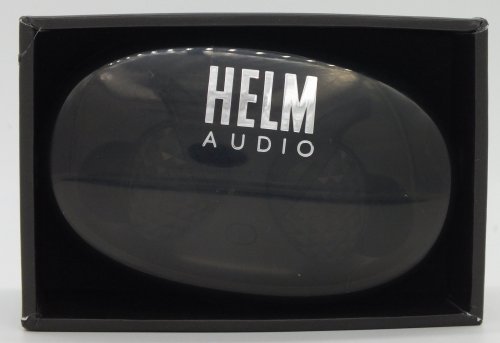 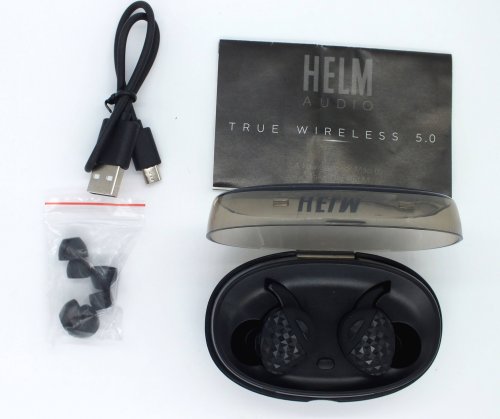 The shape on the housings can best be described as an inverse teardrop with the wider portion at top. Shells are a 3 part arrangement with the bulk of the shell being rubber coated and encompassing the entire inner and top quarter of the outer shell. The remainder of the outer shell has a diamond checkering pattern on it that gives the Helm a very distinctive look. The third part is the Nozzle which exits the front edge at the lowest point. The nozzles are short and have almost no rake but due to shape allow for fairly deep insertion. I used the small tip where medium or larger are usually required for a good seal. The earpieces are large but stay in place well thanks to a rubberized under surface and a built in hook at the top. They may be a fit problem for those with small ears as even for me I found they were somewhat fatiguing for extended wear. The upside is they are water resistant and designed for Gym wear so for short periods, they are fairly impervious to sweat, rain, and dust. 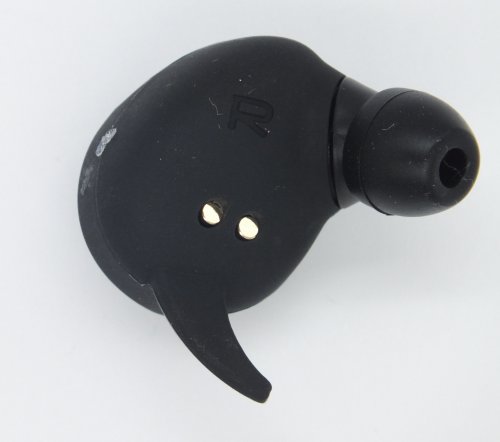 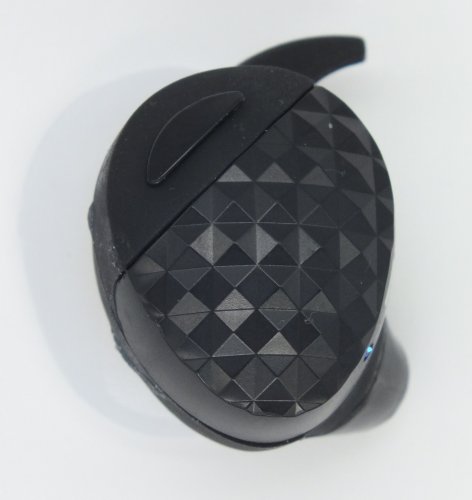 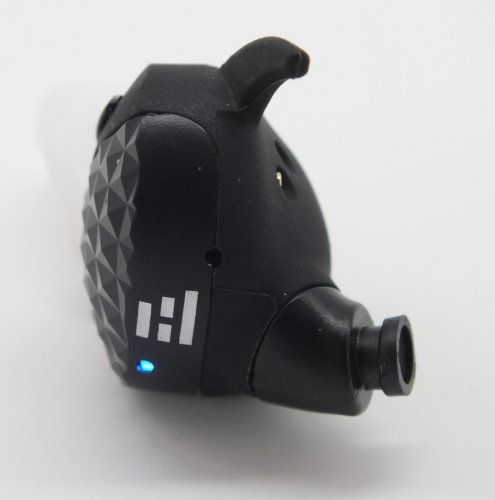 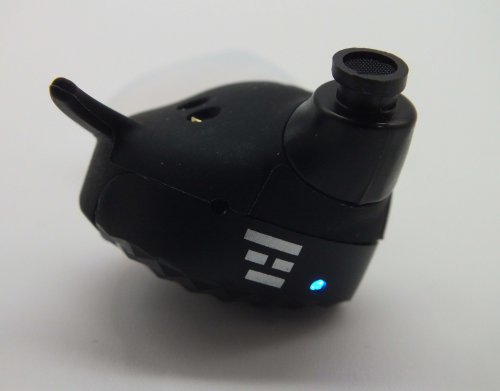 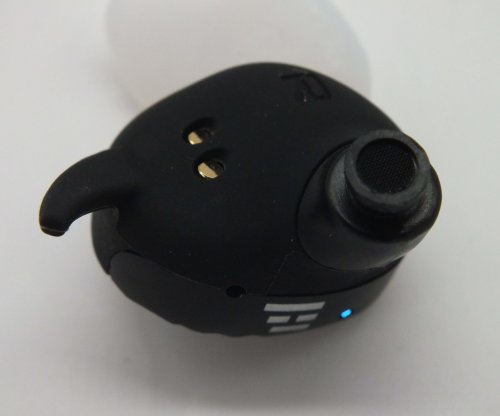 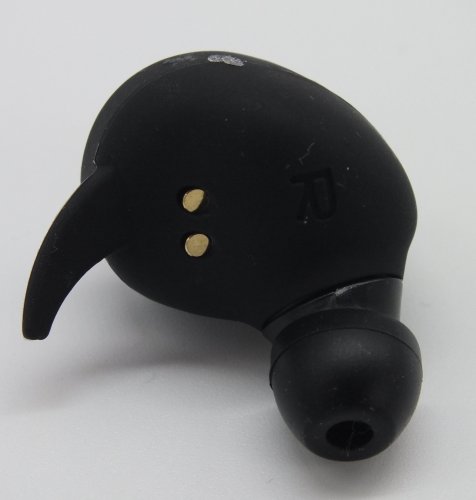 Helm doesn't release much information on the drivers used in the TW 5 but it seems to be the same as the previous model with a listed impedance of 16Ω and a nominal sensitivity of 88 dB\mW. What is new for the TW 5 is the upgrade to the Qualcomm chip that now supports aptX and AAC as well as improvements to the noise cancelling and the microphones as compared to the previous generation. (Yes, I borrowed a previous gen TWS from a friend for comparison).

Bluetooth connectivity is quite good on the TW 5 with automatic pairing as it comes out of the case and good stability once paired. I had no problem moving around the office or running on the treadmill with the source on the opposite side of the room. Helm claims a range of 60 feet from the device to source due to its helical antenna and I was able to get roughly that when using the TW 5 in open space. The signal is fairly easily defeated by hard walls, but less so by interior barriers as it took multiple layers of drywall between source and device to defeat the signal. Overall, the bluetooth implementation is solid, but could be updated with LDAC and aptX-HD to really make it competitive with current releases. I'm sure we will see that in the next model as the upgrade from 4.2 to 5.0 in this model shows evolution in that direction.

The case for the TW 5 is larger than most charging cases, partially because of the earpiece size and partially due to a larger than standard battery in the case. The specs say 6-8 hour battery life depending on volume. I found those numbers to be pretty optimistic as I consistently got closer to 4 hours than 6 at reasonable volume levels. The case itself sports a full 4 charges for the earpieces and gives the user roughly 16 hours of total use before needing to recharge the case. Charge time from dead to full on the earpieces is about 5o minutes. Charge time on the case from dead is considerably longer and is partially limited by the micro-USB which seems to only draws approximately 1 amp regardless of the charger ahead of it. I tried a couple of 2.1A capable chargers and neither registered a current draw over 1A so I assume this is a limit of the internal circuitry. Maybe the next revision will use USB-C and a higher charge rate. The other things to note about the case. There is a button between the two earpiece slots that must be pressed to initiate charging. They will not automatically charge when inserted into the case as one would expect and for me, I know I forgot to press the button more than once when placing them back in the case. 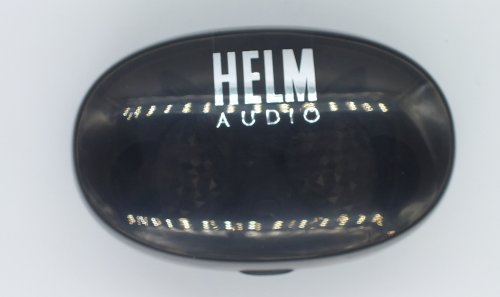 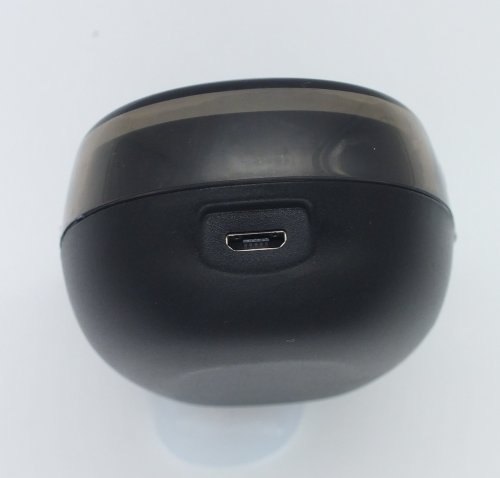 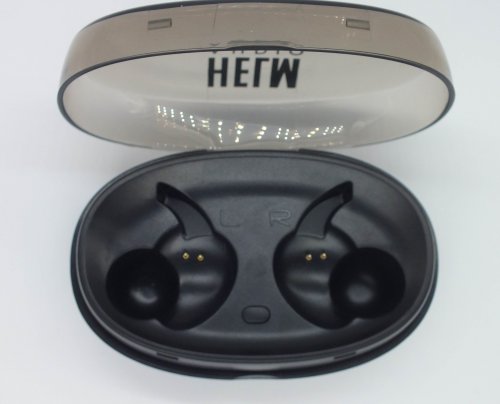 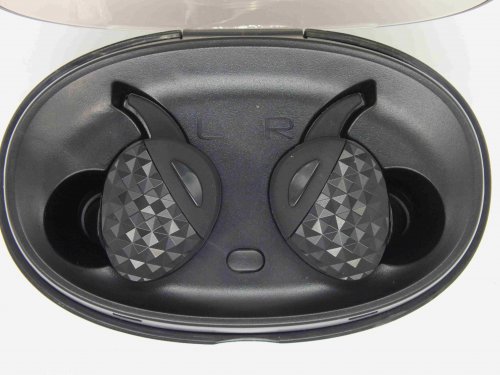 I found the call quality to be good both for incoming voices and outgoing. Both earpieces house a microphone that sits at the junction of the two shell parts on the leading edge of the shell and is visible in the photo below. The microphones are somewhat susceptible to wind noise but less so to movement and environmental noise than expected. Latency is quite low when picking up a call by pressing the button on the earpiece and also when hanging up. I found the TW 5 did a good job of switching between music and phone and with most applications picked up right where it left off when the call was completed. Overall, for those who use their in-ears for telephone conversations, the TW 5 would be one of my top picks of those I have reviewed to date. 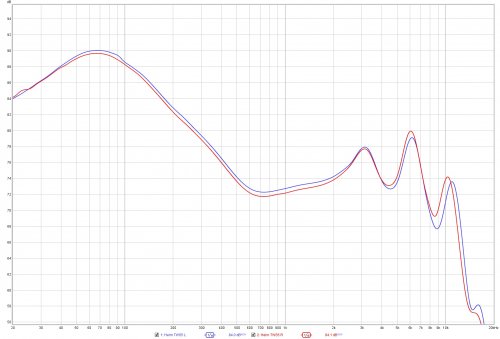 The TW 5 starts out with a big bass boost centered around 80Hz and then drops fairly quickly above that but doesn't fully flatten out until almost the transition into the mids. This gives the TW 5 a very bass driven signature. While the bass is considerably more forward than I prefer, it does react reasonably well to EQ so can be reduced back to a more moderate level for those of us inclined to do so. Mid-bass is somewhat loose and lacks crispness that would help with texture. while adding mid-bass bleed into the mids which does give the TW 5 a warm signature, but at the expense of obscuring the lower-mids.

Lower mids are somewhat obscured by the mid-bass bleed and sound considerably recessed as a result. There is a climb throughout the mids that brings the upper-mids to the forefront and gives female vocals more presence than their male counterparts. Male vocals sound a bit thick and dull comparatively while upper range vocals are a bit more crisp and lifelike. Strings have a slightly unnatural sound as the violin lacks a bit of energy to really cut through like it should. These are much more suited to guitar rock as they do a better job of portraying electric guitar with good growl and realistic tonality.

The lower treble is pushed forward as previously mentioned, but not so much so as to be strident or harsh. There is some grain in the treble, similar in presentation to the TRN v80 in that respect. I was not a huge fan of the v80 for that reason but many others seemed to like it so your mileage may vary here as well. Cymbals are fairly well rendered but lack a bit of crispness to the lead edge, while snare rattle sounds a bit better. Roll-off is fairly steep at about 10kHz and this limits top end air and sparkle a bit, but also keeps the signature from straying into fatiguing territory in the process. Treble detail is reasonably good throughout the range, but seems to be a bit better at the lower end of the range than the upper.

Soundstage is a bit wider than deep and has only marginal sense of height, but manages to sound larger than I expected out of a sealed unit dynamic driver model. When seating the orchestra, most positions are correct and instrument separation is good with the occasion placement of instruments more left/right than front/back due to the wider than deep staging. Imaging is good with spatial cues being easily recognized and movement around the stage easily perceived. Layering is good up to a point where it starts getting a bit compressed as tracks get faster and more complex. I found this true both with pieces that were particularly complex with large numbers of instruments involved and tracks that were particularly fast with fewer instruments involved. If you are a big fan of speed metal, I'd advise an audition before purchase to be sure these suit your needs as I found some tracks quite good while others were a bit compressed and unnatural sounding.

The Helm TW 5 is an interesting mix for me. I like the aesthetics and the build quality, but those same features may be problematic for those with small ears. I'm not a huge fan of the tuning, but it reacts fairly well to EQ so I can adjust that to be more suited to my liking. It pairs easily, if not automatically, and does a good job of making calls in addition to playing my music while at the gym or on the go. Battery life is good, if not quite as good as the advertisements suggest, and the charging case works well. This one is a hard one to judge because every factor has a caveat and a solution (except for the size thing) and it will all depend on how much emphasis you put on any one feature as to whether the Helm TW 5 makes a good choice for you. I like them with a bit of EQ to dial back the bass and could be happy with them for gym use as such. They are after all a sub-$100 bluetooth in ear, so checking my expectations against that, I find myself guardedly recommending these. Definitely worth an audition, maybe worth a purchase depending on which factors you weight most heavily.