Pros: Tiny, excellent build quality, volume control is excellent, sound is grain-free, charges off USB and the battery life is long.
Cons: Not suited to cables with large plugs. Designed for IEMs only. 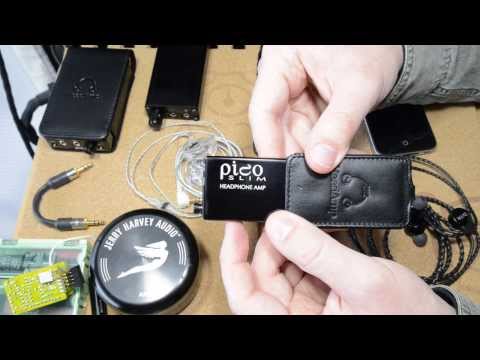 ​
As if portable amps didn't have enough limitations to begin with, using them with sensitive custom IEMs could introduce a number of problems. First was that they require a very low gain, they would draw out hiss out of even good amps and amps that use regular volume pots often have channel imbalance. Portable amps are also bulky. So it was that Justin at HeadAmp came up with the Pico Slim, which addresses all of these problems. 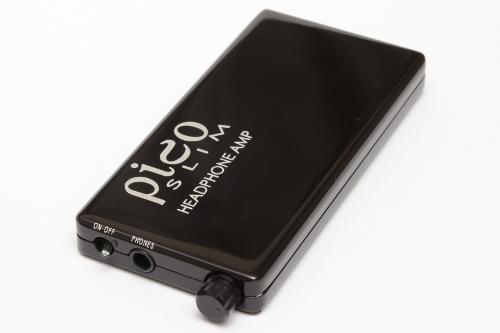 As the Jerry Harvey JH-13s were becoming popular, they ran into all of the above-mentioned problems, which anyone with multiple-driver IEMs are likely to have encountered at some stage, so the Pico Slim is fitted with a digitally controlled volume chip instead of a regular pot. With 124 steps, it completely eliminates any chance of channel imbalance. The gain is also set very low, so with most IEMs, even very sensitive ones, you'll likely be using the steps after 12pm on the dial. 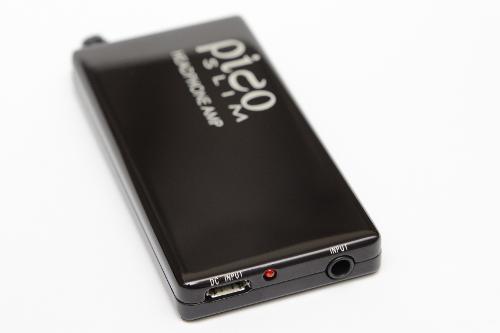 The Pico Slim is also VERY thin -- the same thickness as an iPhone 4/4S, though the beautiful anodising on the case will probably make you want to keep it inside its lovely leather case. That case is designed to allow easy access to the rear micro-USB charging port (it has no other purpose than that) and the input. That may be the only downside, that the input is on the opposite end to the headphone socket, but the amp is so small that fitting both on the front would probably result in serious challenges to cable organisation, given that the amp is the same thickness as the Oyaide right-angle plugs that are on many of my cables. 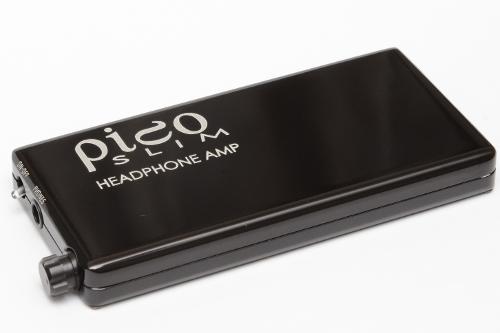 Sound-wise the Pico Slim is typically HeadAmp: Nothing but the facts and no grain or harshness to speak of. If you're looking for a bit of warmth or anything like that, this is the wrong amp. It even measures very well, only bested by its larger brother, the Pico Power, due to a small amount of noise resulting from the volume chip.  It makes it a good partner for portable sources that have unsuitable output impedances for IEMs, such as the original AK100 (unmodified), Tera Player, older iPods or what have you. You can charge it off any USB port or charger you have around that has a micro-USB plug too. 
While for its price it is expensive for a device with a single function, the outstanding build quality (the first batch also had a lifetime warranty) and its crazy small size make it seem like good value after the purchase of a four-figure pair of custom IEMs.
Pros: very small, sound clear
Cons: peak at powering on
Only for IEMs, very small, long battery life.
Using it with iPod Touch 5th and w4R.
Pros: Digital Volume Control! size, battery life, sound quality and build quality of course!
Cons: Wow - Pricy!
First - I bought mine used - my complaint on price is based on new price of $400, though I guess it holds value...

OK, that's out of the way.  Justin at Headamp builds some of the highest quality hardware I have ever held in my hands - truly beautiful.

Sound quality is outstanding - close to wire with gain as I've heard.  I have yet to run the battery down before I get around to a recharge.


The volume control is second to none.  If you listen at low volume levels with sensitive headphones and iems, the Pico Slim is the best there is, and I've tried a few in my search.  It is literally indispensible to me.  If this last bit sounds like your listening requirements, I can't recommend the Pico Slim highly enough.