Gustard Audio is a Chinese Audio Company known for making decoders and amplifiers. In the past few years, Gustard has introduced some quite popular and well-received products like the U16 audio interface, the intro level beast X16, re-clocker C16, and its predecessor X26Pro-- X26.

X26Pro is the newest modified/upgraded version of X26 which was announced in 2019. Unfortunately, I was not able to get my hands on X26 before it is discontinued. But according to Huang (the lead designer and founder of Gustard), X26 Pro has all-around improvements over X26. In this review, I will mainly focus on evaluating the sound performance of X26 Pro. 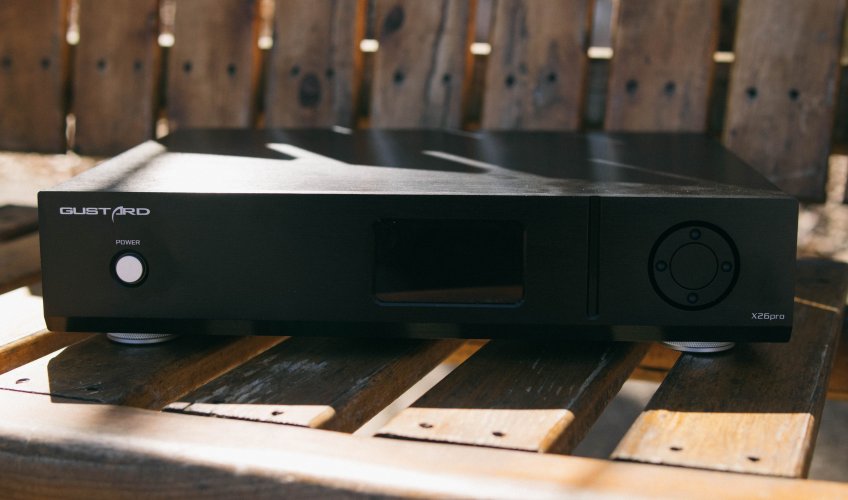 X26pro equips with the class-leading Dual ES9038Pro audio chips, one for each channel. Each ES9038 Pro chip has its independent power supply and grounding. At the price point( and even lower), it is not surprising to equipping ES or AKM’s flagship chips. It provides a solid foundation of the technical performance of these DACs. However, please keep in mind, a High-End chipset isn’t always guaranteed a good sound. Some pro DACs like the Merging Hapi which is using ES9028, but the sound is terrific.

The SNR from X26Pro rated 127db unbalanced, 129db balanced (@1kHz), it is slightly better than AKM4499s in DACs like D90—122db unbalanced and 127db balanced. Based on my experience, ES chips generally have a more analytical sound within the same bracket than AKM. Although it is not always the truth, it is still worth mentioning, in my opinion.

Clocking/Re-clocking is just as crucial as the DAC chips in sound performance. And in many cases I have experienced, the clock often time is more critical than chips nowadays because almost all manufacturers know customers will stare at the chip model in the first place. Then, there are plenty of DACs using High-End chips but end up being a jitter bomb and sound very plasticky. X26Pro utilized K2 Ultra-Low-Noise Clock Synthesizer, which eliminates the source clock and only uses the internal femtosecond clock or an external clock as the master clock. So, it doesn’t rely on the source clock, which can be an excellent solution to the PC-Hifi system.

X26Pro has one of the most comprehensive decoding functions at the price. It can decode up to PCM 32-bit/ 768kHz, and DSD 512. It has the NOS- No Oversampling mode, which entirely skips the digital signal sampling and sends the analog conversion signal directly to the amplifiers.

There three PCM filters—Vivid, Composite, and Gentle. In reality, all three filters sound quite differently, which I will describe in the sound analysis. The four DSD filters (47k, 50k, 60k, 70k) are not as distinguishable as the PCM filters. All digital filters are developed on the Analog Device SHARC DSP platform with a built-in anti-aliasing noise algorithm. According to Gustard, this self-developed filter system can sufficiently reshape the noise signals and deliver the purist signals.

The USB interface in the X26Pro is based on the XU216 XMOS chip. It supports PCM 768K and DSD 512, plus MQA Full Decoding. I find the built-in USB interface is good enough. However, there are still some audible differences between the built-in interface and Audiobyte Hydra Z and ZPM stacks. The latter sounds a bit more natural. Gustard also recommends their own interface U16 with X26pro as the official suite.

The Bluetooth is a nice add-on feature. The sound quality is not comparable with the traditional connections, but it is really convenient to use X26Pro as a DAC/Preamp and connect it with active monitors. It supports LDAC up to 24-Bit/96kHz, as well as aptX, SBC, and AAC. In this review, I did not evaluate the Bluetooth sound quality in the sound analysis.

X26Pro’s rear panel has all the major connection ports. What worth mentioning is the port follows the same order as the Rockna/Audiobyte order that is the most commonly used one. The additional clock input comes in handy, as it allows us to do the further upgrade by adding external clocks. 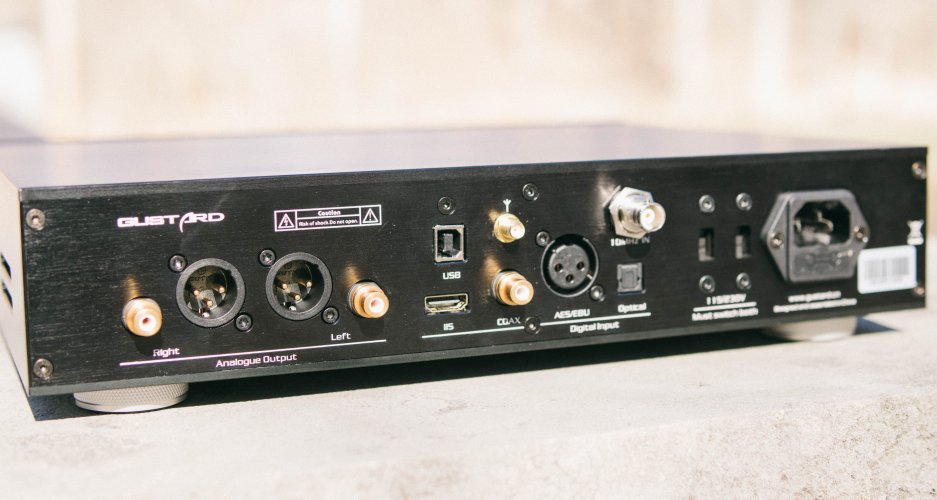 The front panel is straightforward and articulate. There is a power button, a screen monitor, and a menu/function button from left to right. The screen shows the current connection, volume, and decoding rate. The menu page allows you to select filters, master clock, NOS mode(on/off), phase, and adjust brightness.

X26Pro also comes with remote control. It can be beneficial with some home audio systems, but I was hoping it could be of a better quality tho. 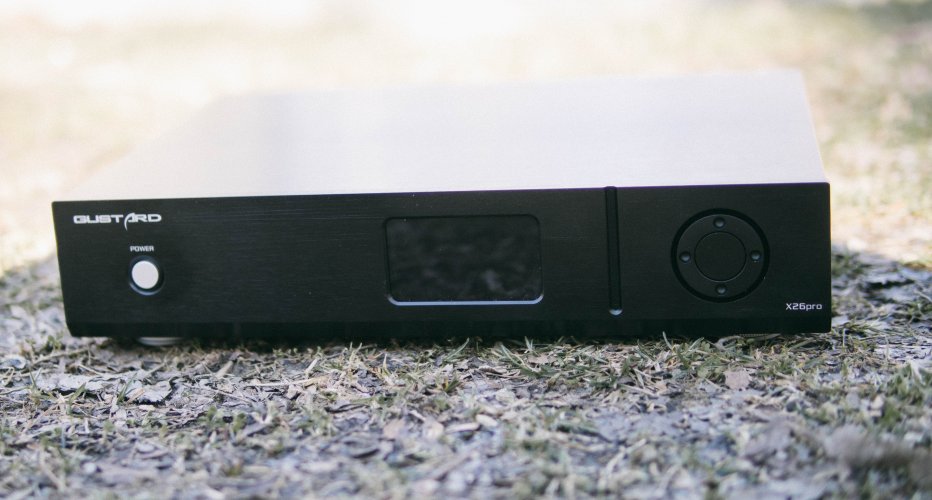 I have paired Gustard X26Pro with Cayin HA300 and Wells Headtrip II Level 1 as two primary reference systems ( one for tube one for ss), SMSL SP400 as an alternative setup for a budget solution. I also tested X26Pro with BHSE/SR009 for the electrostatic system. The headphones I used are Abyss 1266, Hifiman Susvara, Final D8000, LSA HP-1, Sennheiser HD800s, Focal Utopia.

The DAC references in comparison are Bricasti M1SE and Prism Sound ADA-8 XR.

X26Pro has a warm-neutral tonality. I will not describe X26Pro as a warm-sounding or soft-sounding DAC, but you certainly shouldn’t expect an ultra analytical sounding DAC as well. X26Pro perfectly sits in between these two groups. It has an incredible amount of details, a very transparent yet natural sound. It is actually sporadic at this price range. Commonly, DACs at this sup-2000 dollars range will either focus on technical performance but lack fluidity like D90 or focus on musicality but sounds a bit muddy and lack details like RME.

What I really like about X26pro is how natural it sounds. No single FR range is overstated, none of the details are pronounced too loud. The tuning is very similar to some of the much more expensive DACs I have used, such as M1SE and PS DirectStream. The biggest advantage of this type of tuning is that it is not picky about AMPs and headphones. Almost all systems would have a very good synergy with X26Pro. It is an easy plug-and-play DAC, and in my opinion, that is what a good DAC should be. Although there are still some gaps between X26Pro to those higher-end DACs, I am confident enough to describe X26Pro as an excellent introduction to the high-end game.

The bass from X26pro is naturally extended, tight but gentle. I was hoping for a little more power from the bottom end, but I found it is good enough for most POP records. It does not sound as authoritative and physical as M1SE nor 8XR, but considering there is a close to $10000 price difference, I am fine with that.

The bass quality also scales with a better source. With Hydra Z/ ZPM stack and connection, I get more natural rebounds, a more physical mid-bass attack. Compare to the built-in USB interface, which sounds a bit flat and lacks dynamic.

X26Pro has a precise and clean mid-range. It somehow reminds me of the signature mids from Aqua Audio but not as creamy as Aquas.

I have tested the vocal performance with my new discovery, “Yorushika”—a Japanese rock duo with a female vocalist. X26Pro delivers a very smooth and precise vocal performance no matter what system I plug it into. For the instrumental records, I also chose a legendary Japanese band—T-Square. I found X26Pro reproduced Saxophone perfectly. The upper-mid to lower treble has great fluidity and sounds extremely vivid. The upper-mid percussion is very refined and sounds a little artificial, and it seems Gustard purposely removed the edginess at around 6k-7k. I have to admit it outperformed Prism Sound 8XR in this sector.

X26Pro’s treble is relaxing but not necessarily laid-back. It is fun enough for high pitch violin and flute notes. The transmission from lower-treble/upper-mid to treble and ultra-high is smooth, with some nice air filling in between 9k-10k.

However, the biggest problem I found with X26Pro is that I can detect a touch of unstableness and a bit of losing control at the ultra-high, maybe a touch brittle even. I found that is more or less a common issue with lots of ES chips. It is more noticeable when VS M1SE.

The most significant CON I have found with X26Pro is its stage. The overall presentation of X26Pro is kind of flat between front and back. In the headphones system, I found it is less holographic than the other DACs I have tested in this review process. It affects the separation in a certain sense, especially when playing an orchestrated symphony. Nevertheless, the horizontal stage is wide. While playing some OST and instrumental Jazz groups, X26Pro is more than capable.

How far from the high-end?

X26Pro has a very similar tuning idea to many Hi-End DACs. However, it is not there yet. It lacks some physicality and power in the bottom end, a little bit rough at the top. It is somehow less accurate in the stage and image. But after all, these “flaws” only show up while comparing with those ten times more expensive DACs. The technical performance, resolution, details, overall fluidity are very close to the top performers. It has the taste of the high-end DACs, and the quality is outstanding at its price.

X26Pro is a fantastic DAC at the price. It has a very natural and refined tuning, comprehensive functions, and an extraordinary decoding power. It is an excellent option for audiophiles who want to glance at the hi-end DACs without breaking the bank. More importantly, it leaves us the potentials for future upgrades with a better external clock. All in all, X26Pro worth recommending!

This review is the first episode of the “Wise Money” series. In this series, I will recommend some audio gears(headphones/DACs/AMPs/cables…) that I bought or tried recently. All gears that show up in this series are considered as good value products based on my experience. However, I am trying to avoid those hyped ones, and the products I selected, in my opinion, are on par with those on the hype train, if not better. My idea is to contribute my own portion to the head-fi community as this is my 5th year in this big family and my 10th year of being an audiophile. I have gained a lot from the community, and it is time to give back to it!
Reactions: nekky, funkur and Ichos
S
searchingtom
I often times have fallen for the hype. Patience is a key to not paying too much in the long run. (Which gives you more funds to buy more things

).
N
nekky
Great review and it is obvious to me you have very good taste! Suffice to say, I think the X26 Pro will “tide me over” for quite some time in my PC head-fi system, and your review confirms that. What I’m curious about more than anything is the real benefit of running their (or competing brands’) external clock and/or USB bridge. Gustard U/C16 combo, Singxer SU-6, which I believe is both a bridge and clock?? That type of thing. Thank you!
Read more…

I have this DAC and it is excellent. I am running it DAC to direct until my new preamp arrives.

I tried Gustard on my RAAL SR1a earphones and it was very good. However, I decided to use a slightly less revealing tube DAC instead on the RAAL SR1a. The RAAL can always use more warmth.

On my 2 channel system this DAC is excellent. Great sound stage, no complaints on the top end. I prefer it over my tube DAC by a large margin. Compared to my Benchmark DAC3B and my AudioMirror Tubadour III SE tube DAC, I feel the Gustard X26 Pro is a blending of these 2 units. Very detailed and smooth but with warmth.

I am thinking of getting a second one for my Meze Empy system.