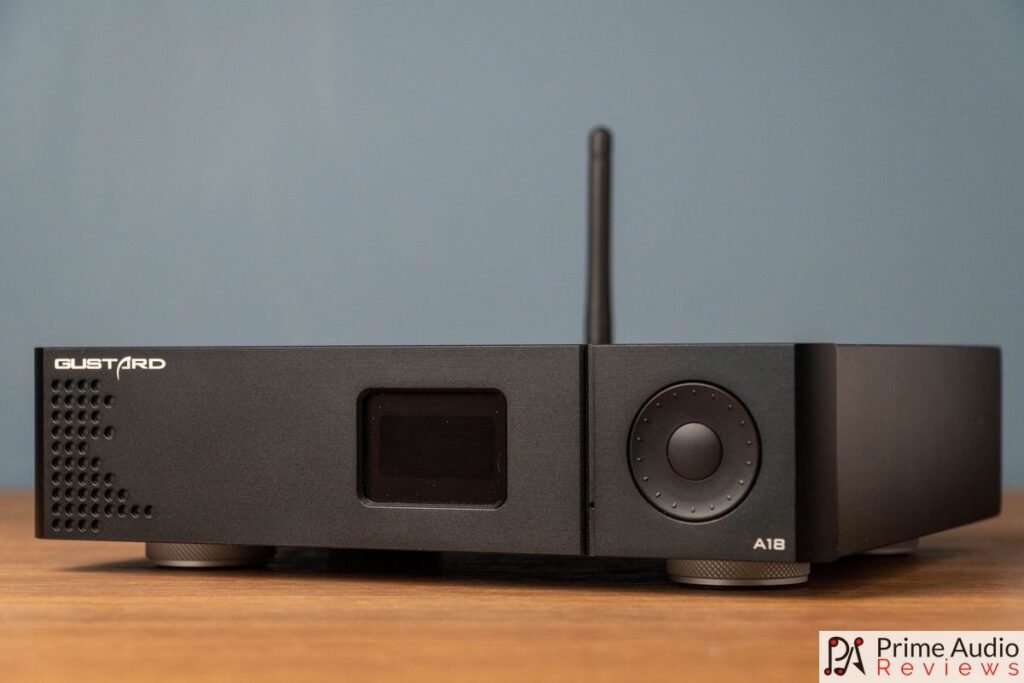 Gustard is a Chinese electronics manufacturer known for making high-quality DACs (Digital to Analogue Converters) and amplifiers. In this review, I’m checking out the Gustard A18 balanced DAC. The A18 features the latest flagship AK4499EQ DAC chip, Bluetooth connectivity and completely independent power supply plus much more. There are a bunch of impressive specs some of which I’ll cover later but what I’ll be focusing on in this review most is the sound and end-user experience. Let’s begin.

Disclaimer: This sample was provided for the purpose of an honest review. All observations and opinions here are my own based on my experience with the product.

Package and Accessories
The Gustard A18 came in a fairly nondescript but well-padded box. Inside, the device is secured in and protected by a sturdy foam insert. There is also a USB cable, power cable, Bluetooth antenna and remote control in the box.

I was pleased to find the quality of the USB cable to be quite good; it’s thicker and more robust than what you typically get with Topping DACs and more in line with the ones that come with Singxer products. However, the remote control is a generic plastic unit that has some extra non-functioning buttons. This isn’t a serious issue or a deal-breaker but it is a little quirk worth mentioning.

An additional rather strange inclusion found in the box is a Mini-CD, presumably with the user manual and Windows drivers on it. However, I haven’t been able to see what is on the CD since I haven’t used that legacy system for over 10 years now.

Considering how easy it is to set up free cloud storage nowadays, I’m disappointed that the drivers and user manual aren’t available online. This is exacerbated by the fact that Gustard doesn’t seem to have a working website so users are forced to just figure things out for themselves (or find and read reviews like this one).

*Update: The drivers and user manual are now available on the Shenzhen Audio website: https://download.shenzhenaudio.com/#all/6 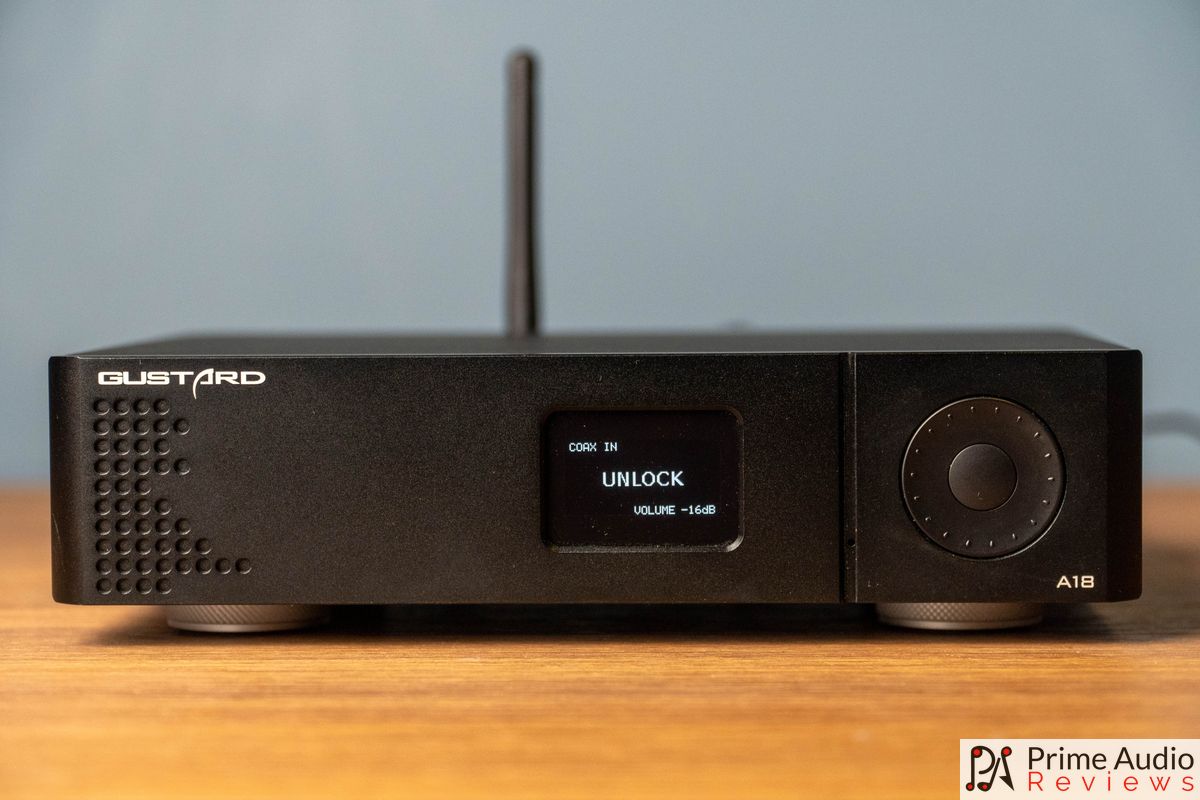 Build Quality & Design
In terms of build quality, the A18 is built to impress (and to endure). It has a very sturdy CNC aluminium chassis that looks and feels like a serious piece of equipment. The weight of the unit is around 2kg and it feels substantial when handled.

On the bottom of the A18, there are 4 large aluminium feet with rubber bottoms. These are nicer than the typical small silicone domes you get and the extra height granted by them provides more airflow underneath the DAC to keep things cool. 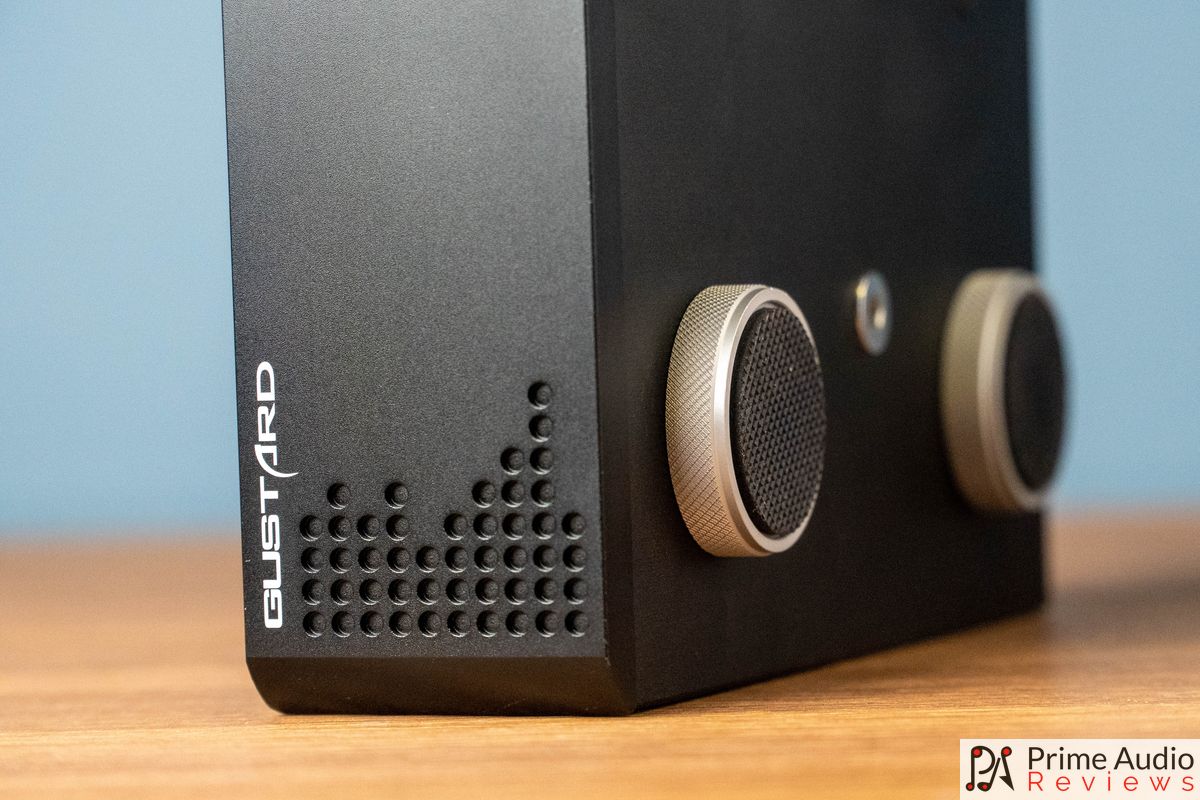 Taking a look at the front panel, I like the low-key aesthetic of the A18 DAC. It’s very minimalistic with just a small OLED display in the middle and turntable/function button on the right side.

On the rear panel are (from left to right):

That sounds like a lot but as you can see, the rear panel is all very organized and tidy. 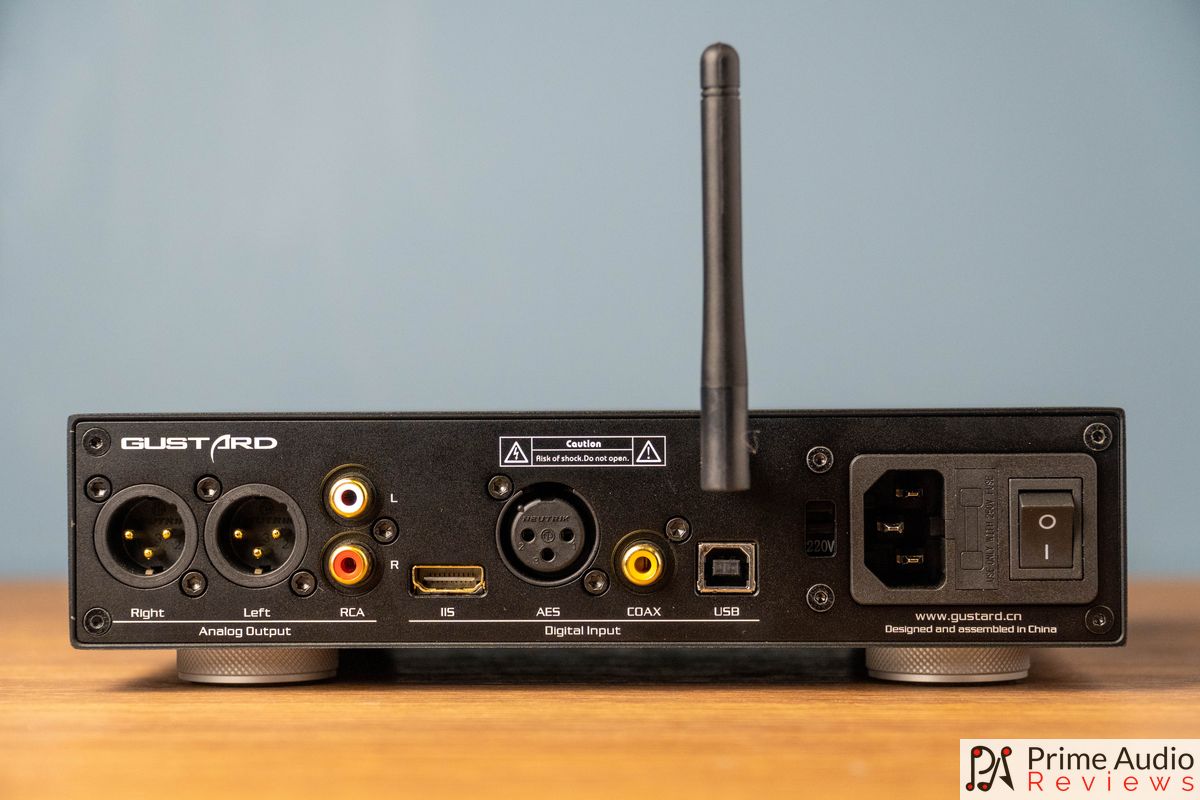 Functionality
When in use, the display shows the input channel, encoding format and sample rate and volume. The screen can be set to automatically turn off after 10 seconds of inactivity or it can be left always on. Additionally, the brightness of the screen can be adjusted and there are a total of 8 different brightness levels.

The turntable/function button can be used to adjust the volume, select the digital input source and open or navigate the system menu. It’s a pretty logical setup and only takes a short time to get accustomed to. The buttons and menu feel quick and responsive.

Here’s what you find in the Gustard A18 menu settings: 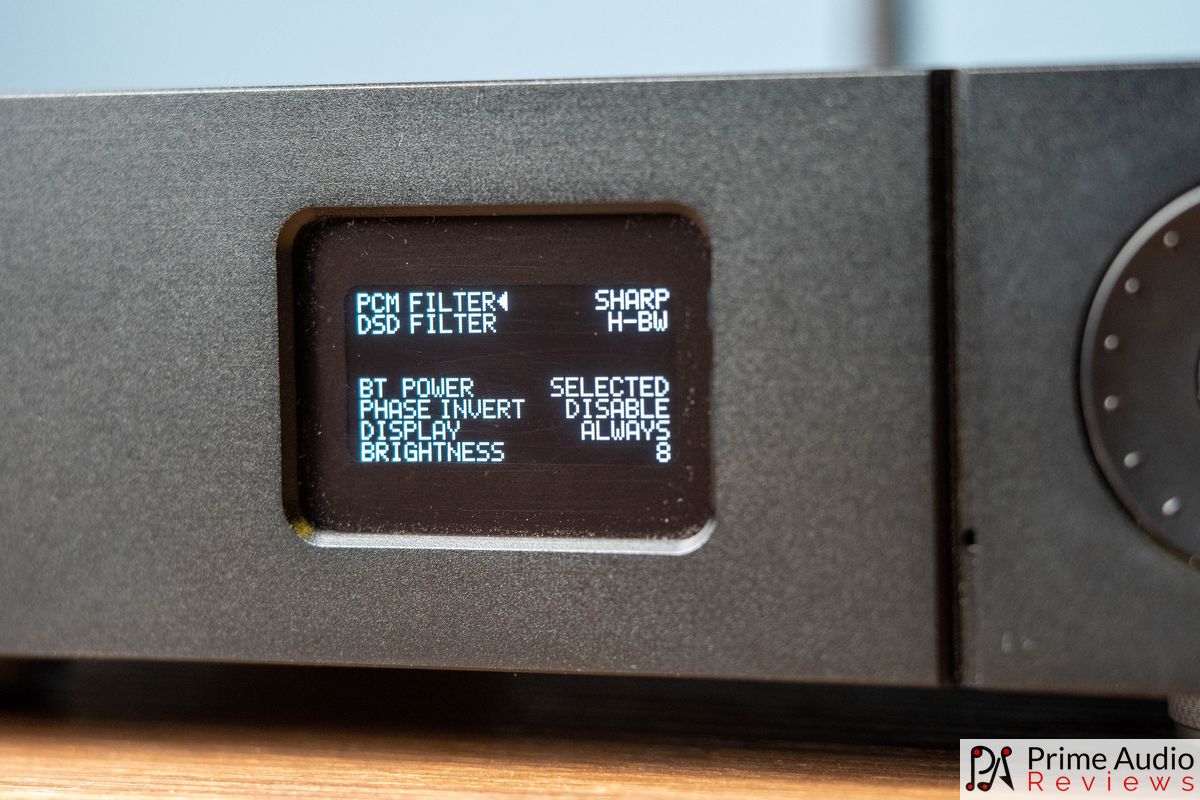 These are all fairly self-explanatory, so I’m not going to break down the details of each list item. It’s here where you find the various PCM filters, of which the Gustard A18 has 6, including SHARP, SLOW, SUPER SLOW, SHORT SHARP, LOW-d SHOT, SHORT SLOW. As usual, the differences between the digital filters is subtle but can be detected if you’re using good speakers or headphones. For the duration of my testing, I mostly kept the A18 on the recommended SHORT SHARP filter.

Internals
Inside the A18 are a lot of high-quality components normally found in more expensive units. In fact, the A18 shares a lot of the same innards as the company’s flagship Gustard A22 DAC. Speaking of flagships, the DAC chip used in the A18 is the same top of the line AK4499 found in the Topping D90 and SMSL M400 DACs.

Other noteworthy components found inside are the Accusilicon AS318B femtosecond oscillators, LME49860 dual op amps and a high-quality linear power supply to keep any electrical noise (noise floor) as low as possible.

Taking charge of the Bluetooth connectivity is the flagship Qualcomm CSR8675 chip. Equipped with Bluetooth 5.0, the A18 supports all the best wireless audio codecs, such as PCM LDAC, AAC, SBC, APTX, APTX LL, APTX HD. When streaming using LDAC, the A18 can achieve a crazy 24b / 96k transmission rate. 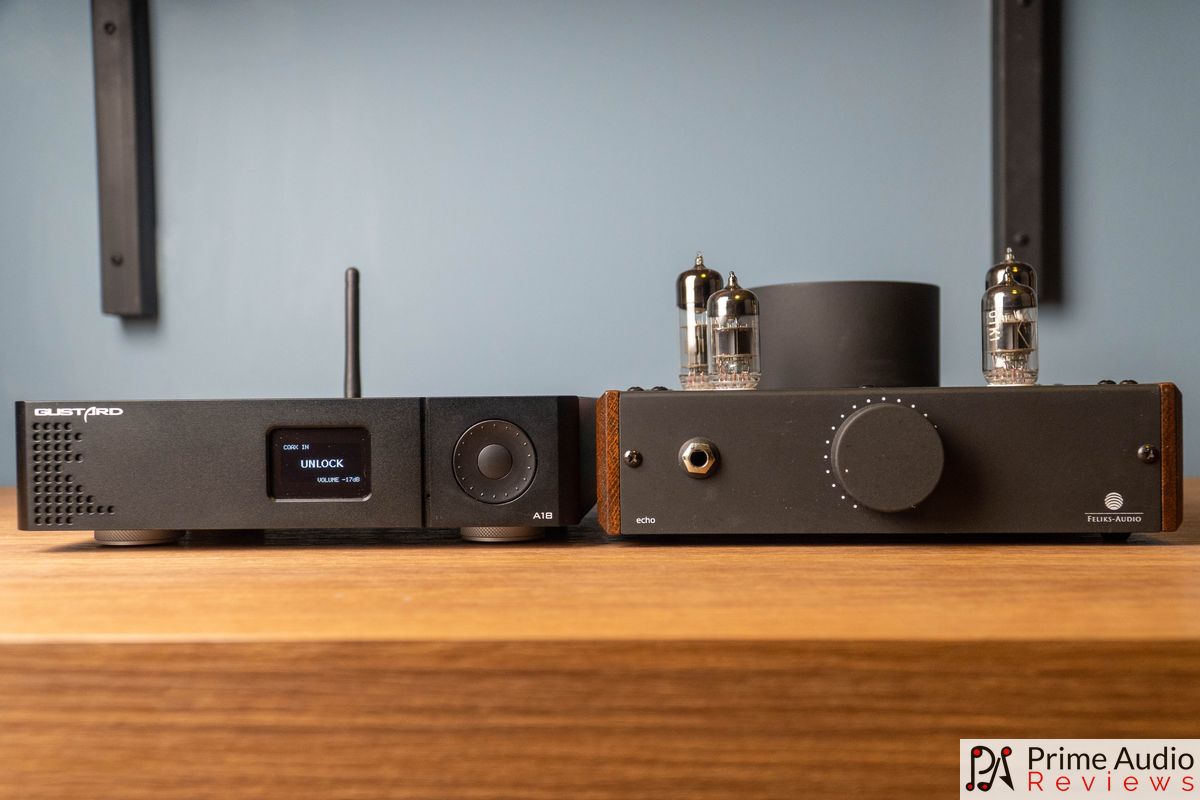 Bluetooth Connectivity
When testing the A18’s Bluetooth functionality, I found it to be extremely easy to pair with various sources. These sources included my iPhone, Sony NW ZX-300 and FiiO M6. The sound quality when streaming Bluetooth is superb, especially when using LDAC. Having said that, I was also surprised at the quality of the sound even coming straight from my iPhone.

When it comes to connection stability, the A18 performs like a rock star. I’m able to connect from anywhere in my 2 story house (admittedly a fairly small one) without any signal drops or cutouts. It’s only when I walk out to my front gate when the connection begins to stutter. So for all intents and purposes, the Bluetooth 5.0 works like a dream.


Gear Used for Testing
For the majority of my testing, I used the USB input and fed the A18 files from my computer. I also paired it with the Aune X5s which yielded excellent results. For headphone testing, I hooked up the A18 to my Feliks Audio Echo tube amplifier. I then tried various planar and dynamic headphones, along with various types of in-ear monitors.

On the active speaker side of things, I tested with the Kali Audio LP-8 studio monitors. Thanks to its variable level output, the A18 can be used as a preamp which means it’s perfect for powered monitors and can also be plugged directly into a power amp. For testing passive speakers, I connected the A18 to the FX Audio FX1002A which in turn, was hooked up to my NHT C3 Carbon Fibre LE. 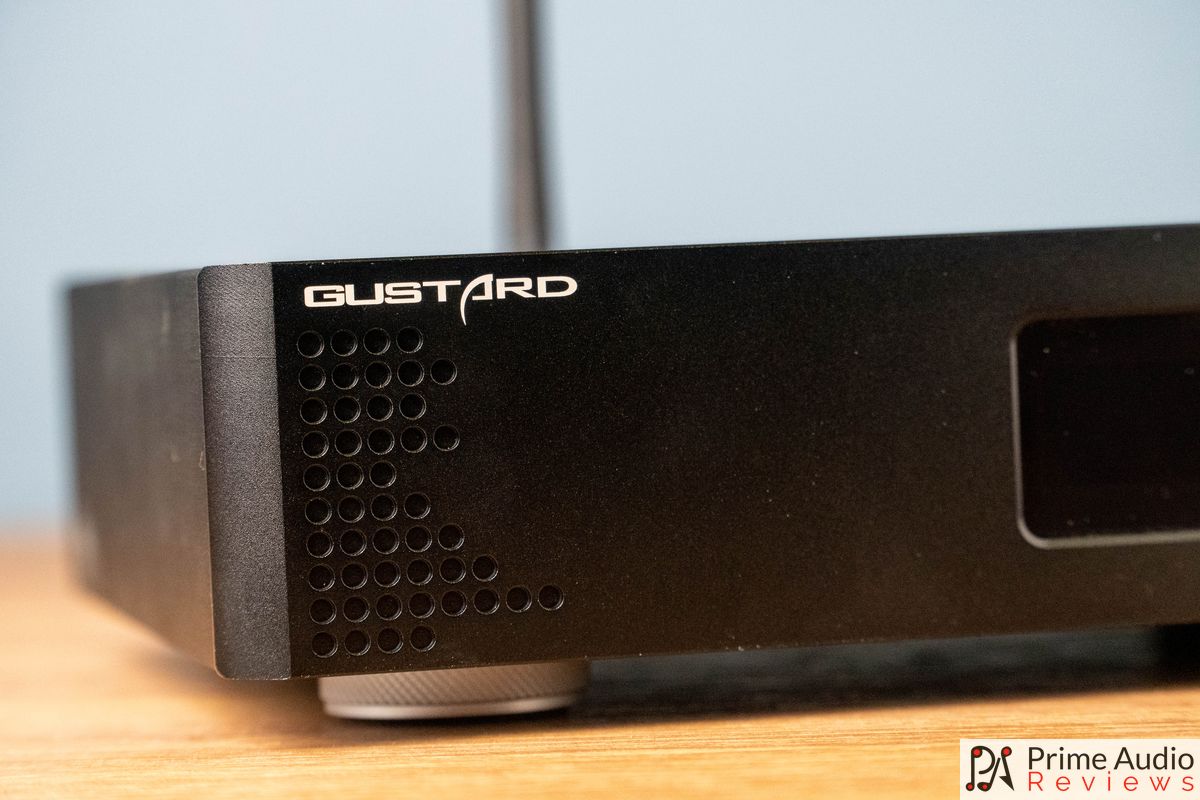 Sound
I’ve been using the Gustard A18 for several weeks now and it has given me many hours of joy. Whether using headphones or speakers, this DAC sounds engaging, effortless and vibrant.

Listening to the A18 with my NHT C3 Carbon, music comes to life in a way I’ve not heard with these speakers. Likewise, when listening to headphones and in-ear monitors, I was impressed by the solidity and black background of the DAC. In fact, what was meant to be a ‘quick test’ with the Feliks Audio Echo amp and the iBasso SR2 headphones turned into an hour-long session as I sat engrossed in the music.

Listening to the haunting “Finality” by Gealdyr, the A18 shows its aptitude with timbre and naturalness. The voices sound lifelike: the AK4499EQ Velvet Sound DAC chip has been implemented in a manner that in some ways sounds more akin to a Sabre DAC with its fabulous detail and resolution.

This is a DAC that delivers with solidity and drive yet is more than capable of delicate nuance and sensitivity. The Gustard A18 is transparent in its neutrality but at the same time, musical and smooth in character.

I was struck by the realism and naturalness of Manu Katché’s “Swing Piece” rendered by the A18. It’s a juxtaposition of a muscular yet detailed sound with immaculate timing and confidence. Each note from the piano and saxophone is rich and lifelike, cast on a stage that feels holographic and vivid.

Kicking things up a notch, I fired up Ice Cube’s “**** Dying” and swiftly got caught up in its fiery, defiant energy. The A18 delivers the vigorous vocals, crunchy electric guitars and grand strings with a fervent eagerness that really highlights the epic nature of the track and sweeps you along with it.

Once again, the A18 created an expansive, organized stage where every element of the music occupies its own space. Every detail is revealed but the presentation always sounds musical without any analytical dryness. 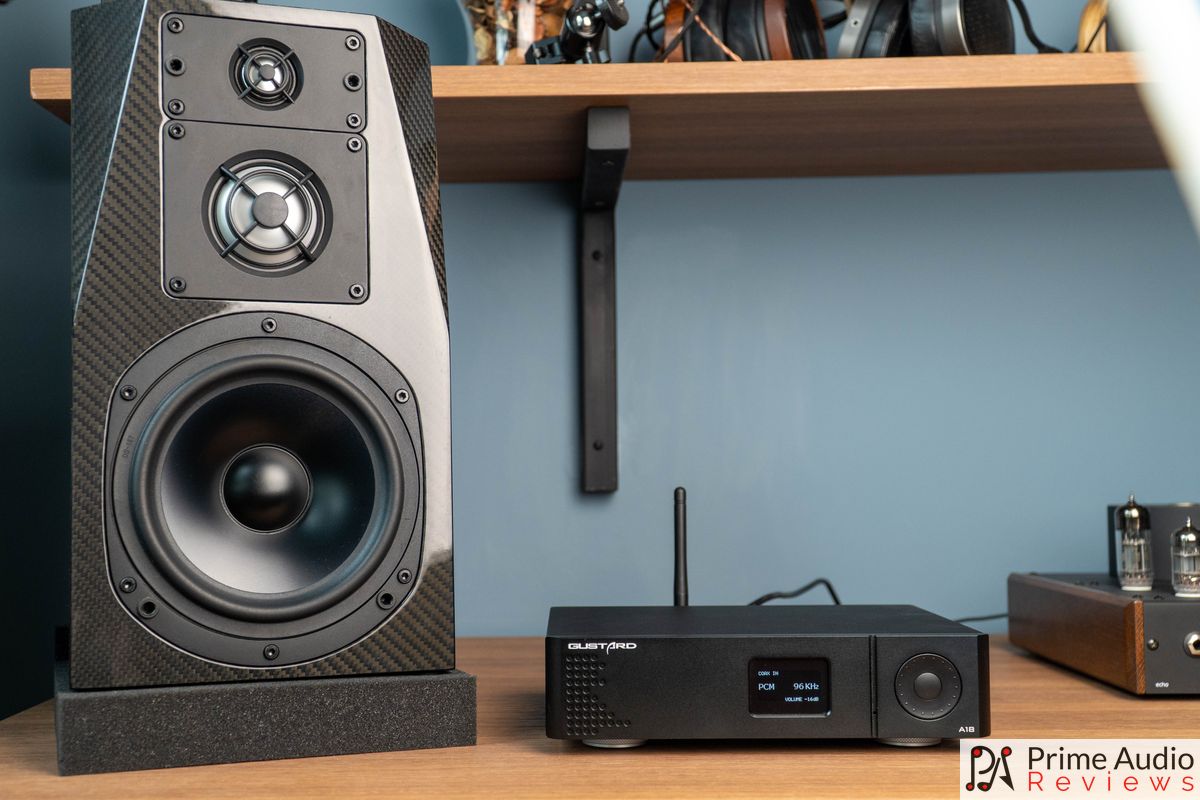 Conclusion
To my ears, the Gustard A18 is in a class above the competition in its price range when it comes to audio quality. Regardless of music type or genre, the A18 sounds robust, effortless and totally in control. It has wondrous detail and transparency and is simply amazing in terms of spatial cues and imaging/soundstage.

The A18 has marvellous build quality and is super easy to use. It’s not loaded with features and doesn’t have the most extensive menu or options but it does what it does extremely well. I also just learned that there is an updated version that has MQA support and an optical input which will really bring it into line with the competition in terms of functionality. Simply put, Gustard A18 is an excellent component that sounds amazing and offers great value for money. I highly recommend this to anyone looking for a solid DAC/preamp to add to their system.

Twjones
Great review. I just got one to replace a dead Geek Pulse - which as much as I dislike LH, sounded pretty good. The build quality on the Gustard is in another league, as is the richness and detail I now hear via my Massdrop CTH amp and LCD-2F 'phones. I also have a Calyx M which I listen to via Noble K10u IEMs, now also clealry outclassed by the Gustard. Great DAC.

zeissiez
I have had this DAC for six months, for a two channel setup, which comprises a pair of KEF LS50 and Willsenton R8 tube integrated amp. Great tonality, zero digital glare, natural sounding, detailed, good meat on the bone, and the biggest surprise: a holographic soundstage. This DAC is top performer for the money.

crabdog
@zeissiez absolutely. This DAC works so well with my NHT C3 and amazes me every time I turn it on.