Grado releases the little brother of their state-of-the-art PS 1000 Headphones, using trickle-down technology to cut the price by two-thirds, while retaining much of the performance! Also made in America, the new PS 500s are Grado's second offering in their Professional Series line, designed both for the audiophile and recording engineer who value neutrality and high definition over all other design goals. They are an open air design, as are all high end Grado's, and are very light and comfortable. An extraordinary value, and fully appropriate for both reference and critical listening. In the category of musical neutrality for the picky audiophile and the demanding recording engineer, the PS 500s are unsurpassed at this price point. Grado achieved this minor miracle by applying the lessons learned in constructing the wondrous PS 1000s. While still using mahogany to cover the motors, they added aluminum shells to double dampen the housing and kill vibrations. This sandwich design creates the most neutral performance. The large diaphragms contain rare earth metals, including gold wire for maximum definition. The connecting cable is Grado's newest formula, with some fifteen wires enclosed in a proprietary shell. By being American made, they save big bucks from having to import phones from China and can, instead, bulk up on the technology. Specifications - Transducer type dynamic Operating principle open air Frequency Response 14-29 SPL 1mW 98 Normal Impedance 32ohms Driver matched db.05
Share:
Facebook Twitter Reddit Pinterest Tumblr WhatsApp Email Share Link 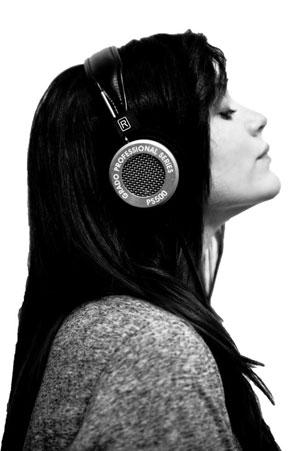 Since my first revelation into "good" headphones was via my Sennheiser HD 598s, which introduced me to great soundstage, imaging, and comfort, I was looking for something that moved further in the same direction for my upgrade, the PS500s.  Detailed listening comparisons in the Overture Audio store where I bought these examined the HiFiMan HE 500, these Grado PS500s, and my Sennheiser HD 598s.

I used four "macro" tests that used all of the music, plus six "event-based" tests that compared the rendering of various small pieces of music, compared by repeating back and forth between two headphones.  I simply ranked the ability of each headphone first (3 points), second (2 points), or third (1 point) for each test.  More detail, including identity of the three songs, in this post: http://www.head-fi.org/t/704826/how-do-you-audition-compare-headphones#post_10254063 .

The macro tests were:


The event-based tests were:


Here is the result of my comparison.  A 3 indicates that headphone was the best of the three in that test and contributes 3 points to an eventual headphone score totaled at the end... a 1 means it was the worst.


So for what  was looking for, which is what the test criteria try to measure, the Grado at 24 points was significantly ahead of the HiFiMan, at 19 points, and my reference Sennheiser, at 17 points.

The Grado PS500 clearly spends your money on the headphones, not the box.  While my Sennheiser, Beats, and NAD headphones come in cabinets ("box" is a desecration to what they are shipped in!) that could almost be placed on your living room table, the PS500 comes in a box that from the outside looks like a Krispy Kreme doughnut box... thin cardboard, three-color printing, flat -- and inside are foam cutouts to hold the headphones.  Cord is not removable.  The cord is heavy... in fact, Grado makes a point of the type of very-low-resistance conductor that is used. It is perhaps six feet long and terminated in a 1/4" jack.  Grado sells a 1/4" to 1/8" adapter, about 9" of the same heavy cord, that one can add to get to the iPod jack size.  Cord and adapter together are double the weight of the iPod Touch 5th Generation and I fear place a strong sideways pull on the iPod headphone jack if the weight is not borne by something else.

The PS500 has a 32 ohm input impedance, which is low enough that the iPod output can drive it easily.  Efforts to add an amp (in my case the FiiO E12 "Mont Blanc") are superfluous... the amp does not improve the sound at all, at least to my ears (and the sound is already great).

These headphones are open back, on ear cushions.  I love the open back, but the on ear cushions can tire your ears out from the pressure.  Grado sells, and I bought, the larger over-ear "G-cushion" that Grado uses on their highest-end headphones, the PS1000. Various reviews claim that these improve the sound as well as the comfort, but I heard no difference in the sound during casual listening (haven't listened really critically yet).

If Beats can be said to exude a hip(hop), ultramodern look, these Grado PS500s can be said to be just the opposite - utilitarian and retro. I am convinced that the headphones of Radar O'Relly on M.A.S.H. looked exactly like these!  Though hidden by the ear cushions, the design includes wood as well as the more prevalent metal, chosen and placed to reduce resonance and improve sound.

The Grados are one of the not-too-many top-audio-quality headphones that have a low enough impedance to be directly driven by iPhones and iPods.  I really do wish that Grado would offer an iOption of a cord that is 1/2 the length and 1/2 the thickness, terminated by a 1/8" plug, to complete the compatibility with the iPod.  I believe they would significantly increase their market share if they did.  They did indicate that third parties offered such cables (don't know who) and that they, Grado, would replace my cable with one if I sent both cable and headphone back to their place in Brooklyn, NY.

I paid $600 for mine, plus about $60 for the larger earpads and Grado adapter.  The Grado site (gradolabs.com) cautions that you NOT purchase these from an unauthorized dealer, as that voids the warranty.  They specifically mention eBay, as well as pointing out that some of the sellers represented on amazon.com are not authorized.  They urge you to check with them as to whether a dealer is authorized.

In short, I love these headphones.  The day that I got them, I wrote Grado expressing my satisfaction (I felt fortunate to purchase a pair that had been demoed for several months and was therefore burnt in).  I told them that I was unable to take them off and asked whether they could be worn in the shower.  No!  I've sought to compare them to a few others that may be known to the reader, and purchasing these (unfortunately) only stoked my thirst for even-more-expensive headphones (looking at the Sennheiser HD 800 now, but love these).

ruthieandjohn
A great point, i019791!  However, the HE 500 has an impedance of 38 ohms, not that different from the 32 ohms of the Grado.  (I recognize headphone amp need is not just a matter of ohms, but that does have a major effect).  Furthermore, I did a more cursory comparison of the HiFiMan HE 6 (top of the line - big brother to the HE 500) with the very expensive EF6 amp (headphones plus amp cost over $3,000), reported at the following link, and found very little difference from the Sennheiser HD598s

i019791
The headphone impedance is not a metric for their efficiency - you may check the efficiency of the 3 cans by glancing at their specs.
Of course hearing very little difference between HE6+EF6 and HD598 makes my point largely irrelevant in your case.

ruthieandjohn
Good point... efficiency for the HE-500 is 400 times lower than that of the PS500! Seemed plenty loud to me, but I guess something was being strained!

And yes, I really really tried to hear a difference between the HiFiMan (either the HE500 or the HE6) and my HD598... I was in the store ready to buy the HE500 with the money burning a hole in my pocket!

Sometimes I feel like the wanna-be oenophile to whom both the finest champagne and the most abysmal jug wine both taste like (very good) grape Kool-Aid!
Pros: Exciting, Easy to drive, Sound has texture
Cons: Minimal Soundstage, REALLY FORWARD(I like it though)
I'm not an experienced audiophile, so i'll make it short.

The PS500 is really easy to drive, you can plug it into your ipod with an adapter and it'll still sound audiophile level, but an amp does help.

Design : As shiny and good as the picture might look, these headphones, IMO, look pretty ugly, I won't consider that much of a problem since I usually only use open headphones at home.

Comfort : Not too bad, the clamp is not too strong and it stays on my head quite well. The headband seem to squeeze my glasses a bit, could get annoying at times.

Sound : These headphones are quite source-forgiving, but they are not that music track forgiving. Make sure you are listening to a good live recording or a nice balanced mix. If you are doing so, even a mp3 file sound quite nice.

Treble: The treble is fast and FORWARD! It is slightly bright but really fun.

Mids: The mids are once again, exciting and forward. The male vocals seem to shine a bit more than female vocals do on these headphones. The lower mids and upper bass is where this headphone really shine. The bass guitar is fast and really clear. The drums in general sound amazing, you could feel the physical thump coming from the drums and since these headphones are quick, the cymbals also sound very clear.

Bass: I'm not really into too much bass since I don'y listen to genres with really strong bass, but I tried some Dubstep and Nightcore mixes on iTunes and Youtube . I noticed that the bass is really strong but decays slightly too tight and fast.

Conclusion: These headphones are Really forward, slightly bright and really exciting. I would suggest these for the following genres:

Well... It also depends on which genre of rock you listen to. Since I mostly listen to Metal and faster rock, I think these are the best. The LCD2 and HE500 may do a bit better with slower rock.

lindcruiser
Nice review! Concise and too the point, thanks.
Read more…